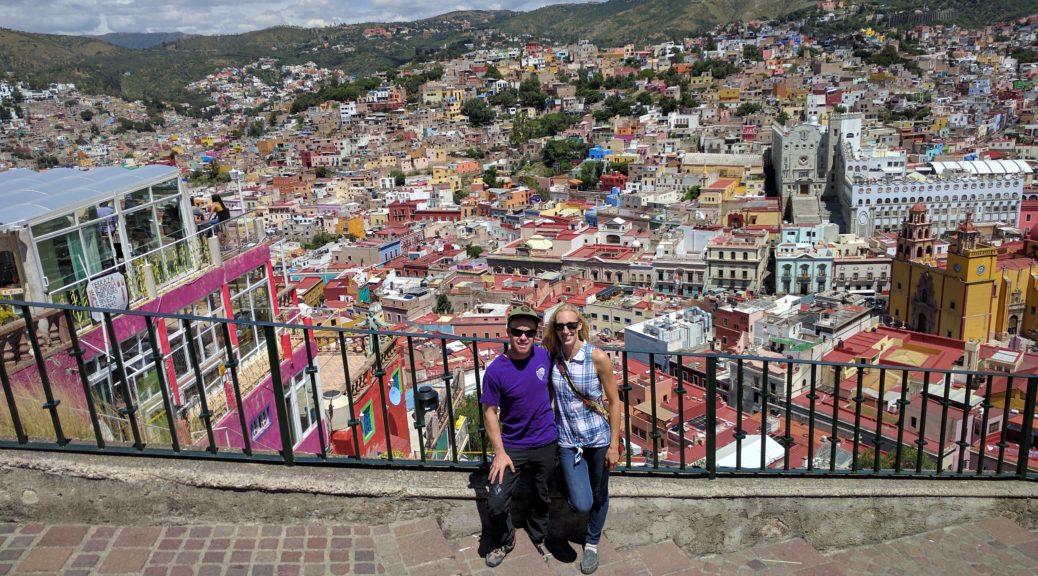 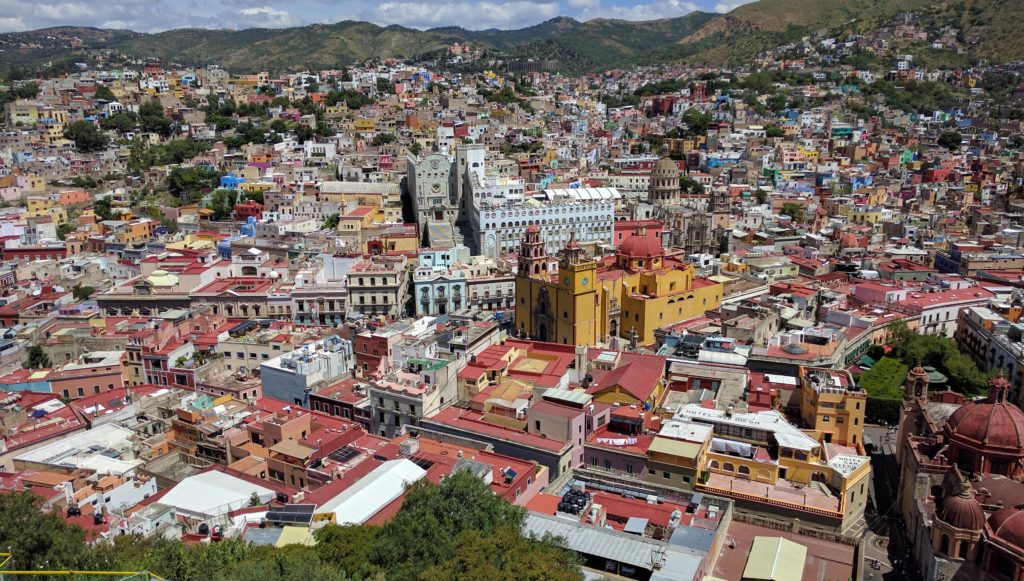 Feeling a new sense of excitement, relief and overall enthusiasm, we departed Ajijic confident Koru was back to normal and as dialed as the day we bought him.  Our next destination was the important pueblo of Guanajuato. Sarah had been there once before and had recalled it’s interesting history and compact layout. First however, we had to navigate some interesting roads with less than ideal fellow drivers. 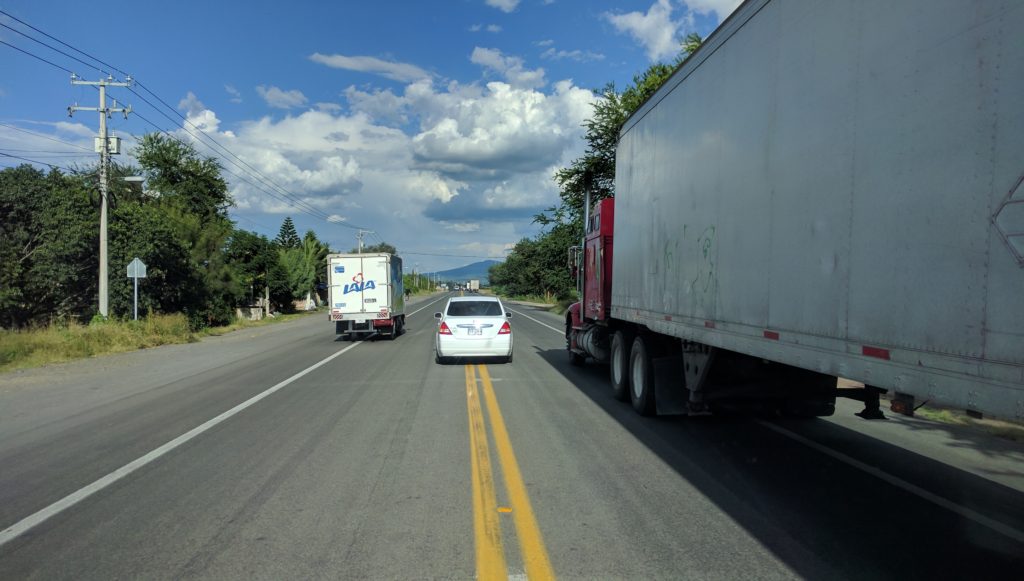 Mexico has been a trip to drive through. Locals say if you can drive here, you can drive anywhere. This particular stretch proved our driving worth. With potholes and topes (speed bumps) everywhere you looked, and more often where you didn’t look, it was an extremely focused endeavour. With cars passing us while we passed big trucks, all crossing double yellow lines and the white lines for the shoulder, the order we were taught back in the States seemed to matter very little. Having realized this much earlier in the trip we understood Mexico’s driving style and did our best to play along.

It is also worth mentioning that most of the quality roads in Mexici require tolls, ranging from about $1 all the way up to a painful $10. It has been difficult to make route decisions based on these facts, so often times we end up on a stereotypical potholed road with hopes of saving some pesos.  Anyway, on to the beautiful pueblo.

Guanajuato was the biggest exporter of silver in the world at the end of the 18th century and produced their fair share of fine gems as well. A lot of the wealth went straight to Spain to finance their reign of domination and construction of lavish Catholic Basilica’s all over Latin America and Europe.

The layout of the town sits directly in a landscape depression where the rich veins had been discovered. With such an abundance of wealth discovered in the area, the miners and dignitaries controlling it decided to build the city as close as possible to the fruits of their labor. Nowadays you can find gemstone vendors all over the city selling basic geodes to high end Jade and silver, all for reasonable prices. 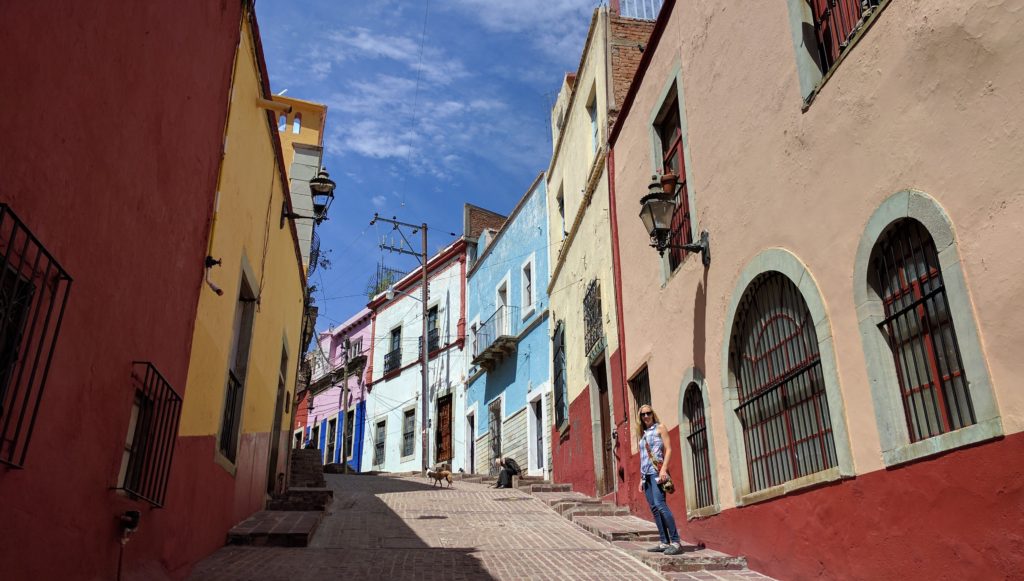 One of the more dense pueblo’s we’ve seen contains a chaotic network of winding roads; it truly satiates the visual senses. Almost every resident has made the effort to keep their home looking great with colorful paint and intricate trim designs. It is an engineering feat when you walk through the cobble streets, as steep or steeper than anything in San Francisco or Seattle.

We walked through Guanajuato enamored by the sights, like El Pipila, several churches and the amazing homes. 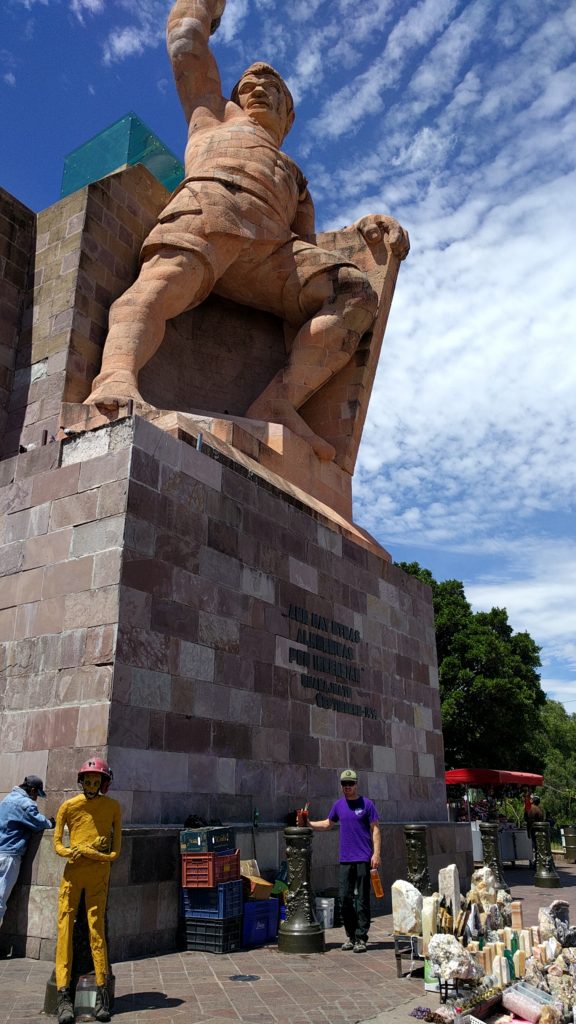 A beautiful university sits right at the center of town full of young students, with the arts seeming to be the prevalent choice of study. Artistic performances from comedy to tragedy have been a large part of the culture here with various showings happening every few days in a very large and beautiful theatre. 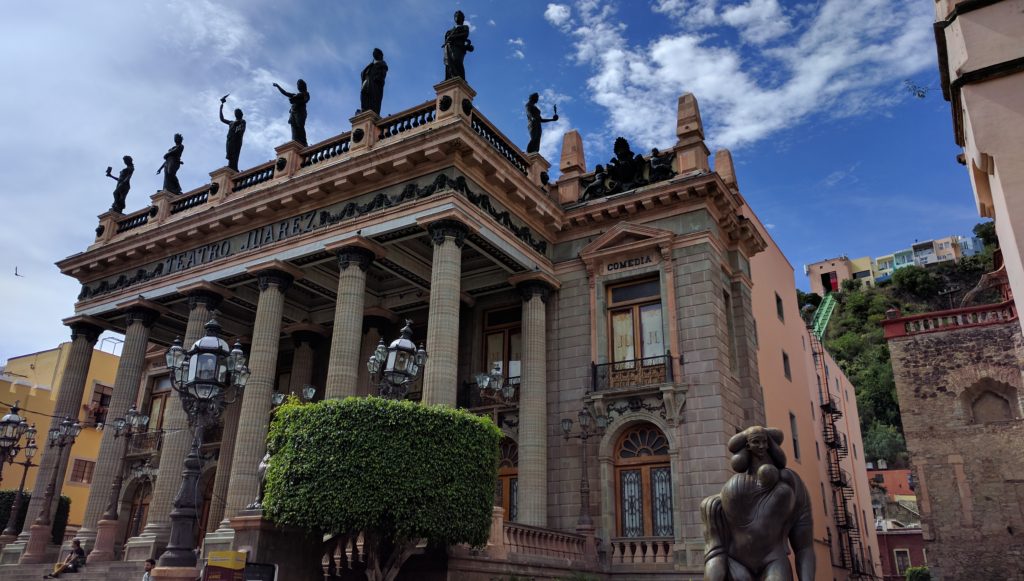 After hundreds of miles, we were wondering when we would meet fellow overland travellers. Our chosen route has been against the norm.  Here in Guanajuato, the place we camped at yielded our first fellow travelers! 🙂 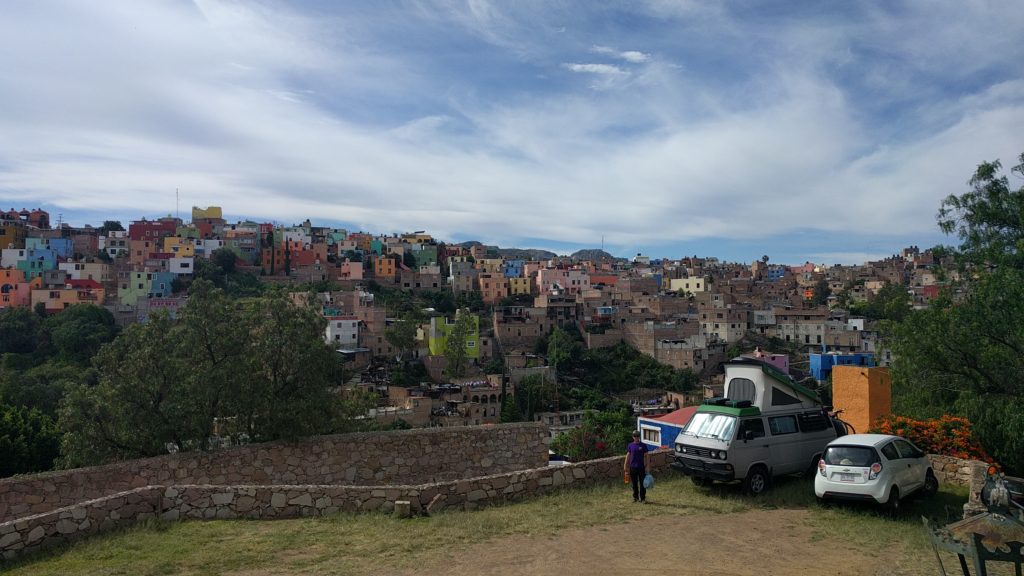 A young couple from Austria had purchased an AWD Astro van in California and proceeded to travel for a few months in the states with their ultimate goal of making it the southern reaches of South America. The next day another older couple from Switzerland showed up in their really cool modified 1977 french Peugeot camper van. They also plan to drive as far south as possible into South America. After a morning of exploring the rains came in hard so we headed back to camp to socialize with our travel companions and enjoy the roomy Peugeot with Mexican candy and beer. 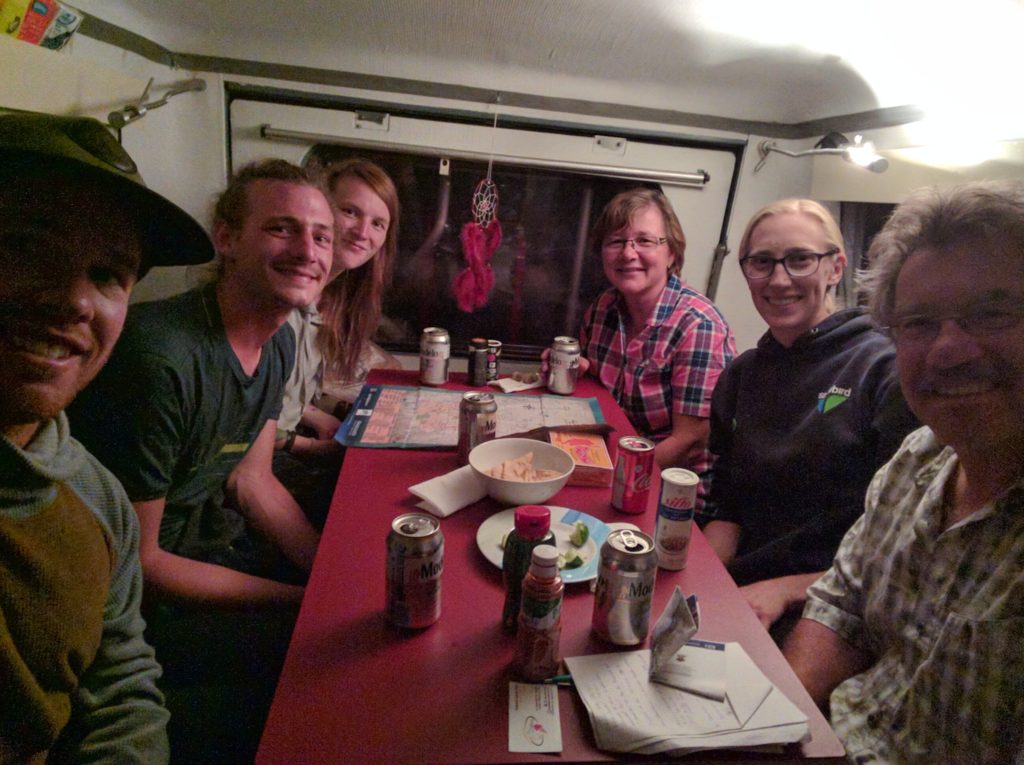 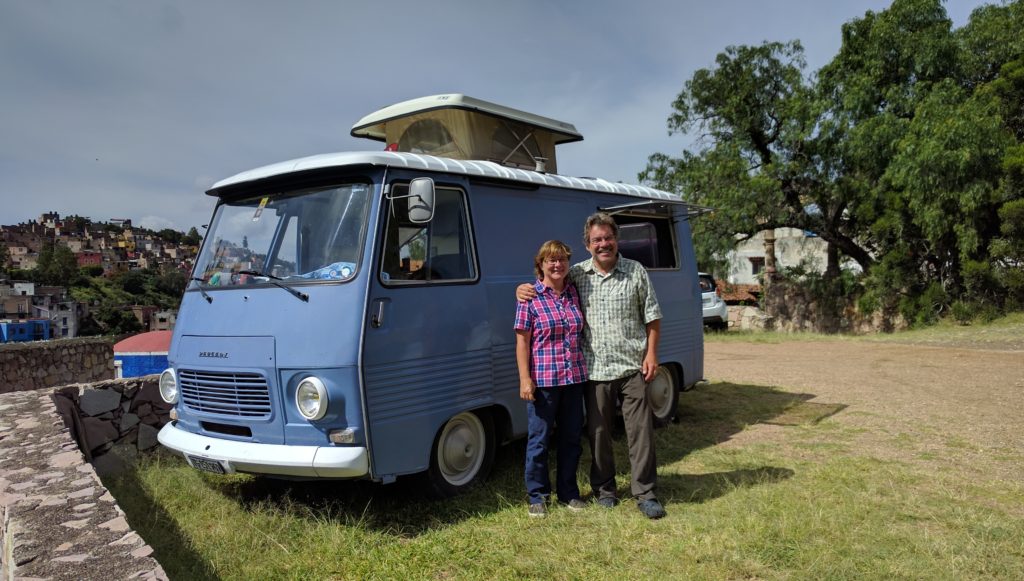 After retiring for the evening after a fun night of socializing we slept like babies in the gentle rain. One more morning of exploring with a quick stop at the Diego Rivera museum and sampling some of the delicious sweets common to the area and we were off again, excited to see what’s around the next corner.