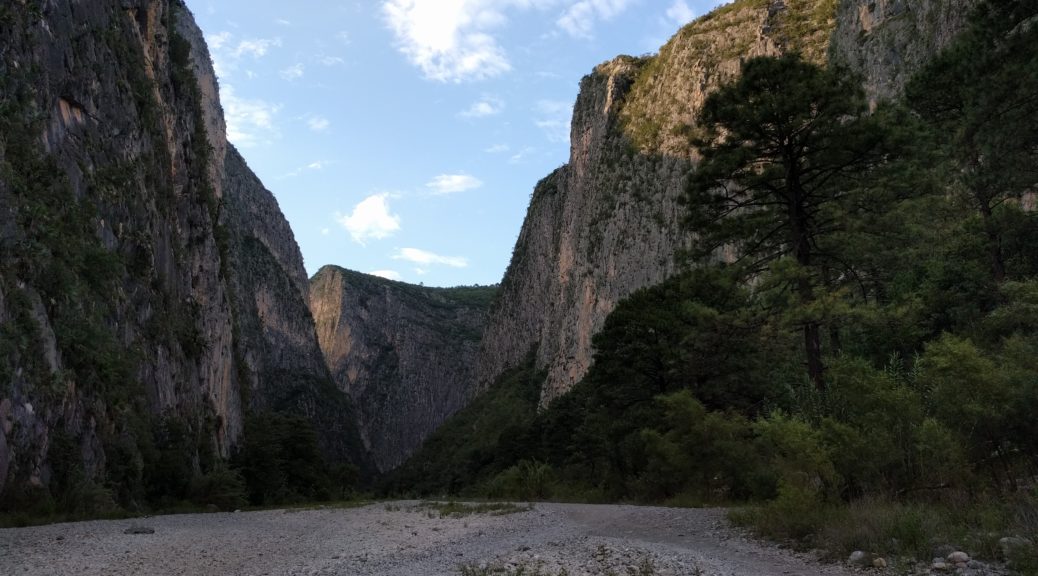 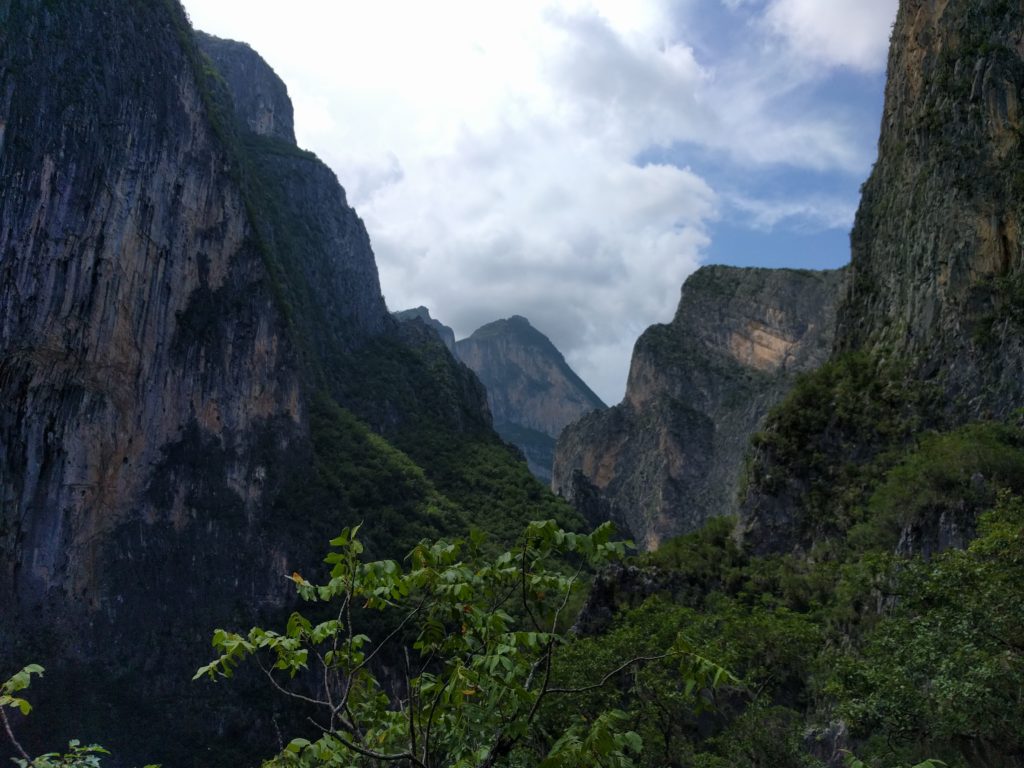 The time came to leave Potrero Chico and continue south. Having thought we’d seen one of the most incredible canyon sites, we made our way to the unbelievable area known to climbers as El Salto, named after a famous waterfall on the Rio Santa Catarina in the canyon during the rainy season. 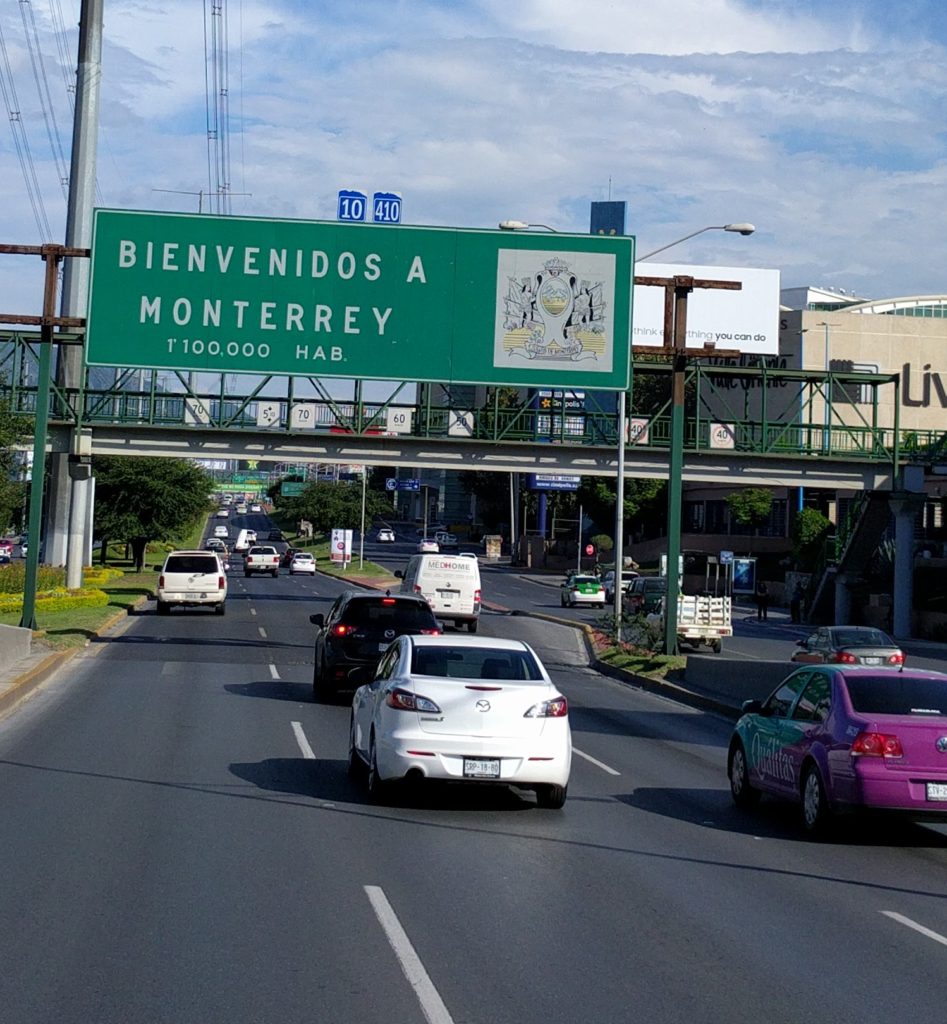 We first needed to navigate our way through the center of Monterrey, one of the bigger cities in Mexico. We can confidently say that it was one of the most wild rides of a drive we’ve ever done.
The speed limit signs were mere suggestions, and honestly might cause you problems if you were to abide. Turn signals were few and far between and passing, oh man passing, can happen literally anywhere on the road, and lanes seem to appear and re-appear without warning. 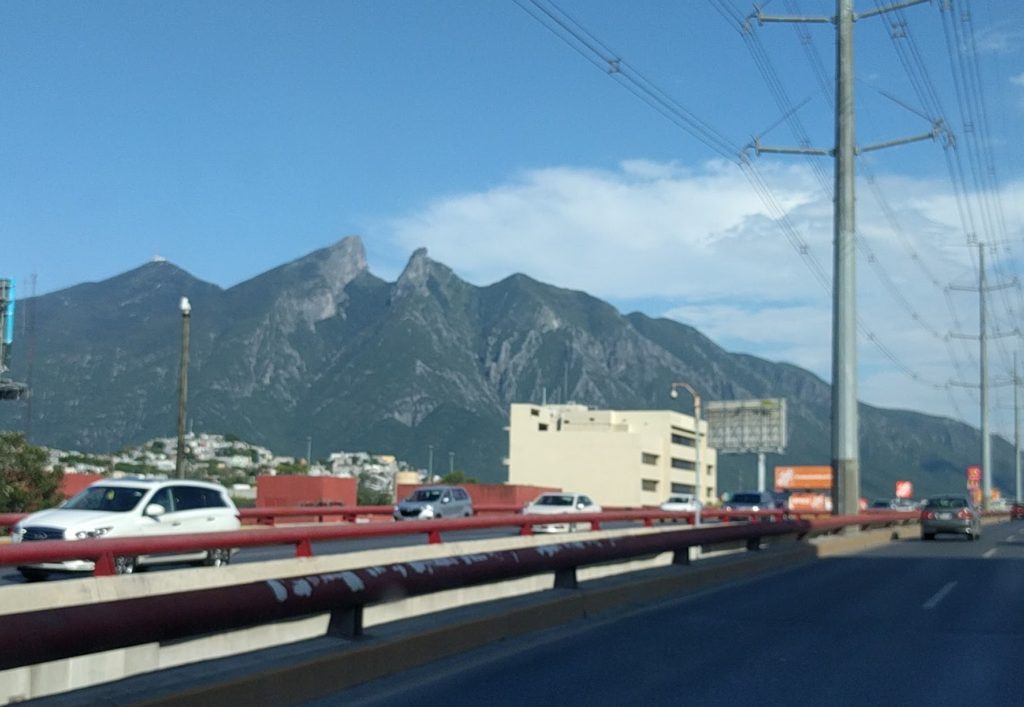 Although we felt like we were on some sort of bizarre theme park ride, the surroundings of Monterrey rial the setting of any mountainous city in the states. Colorful homes and buildings dotted the surrounding foothills causing us to cautiously swivel our heads at any chance to enjoy the city views as we quickly passed through.

We only stopped briefly to use an atm and take in the surroundings because we had little daylight left and had our eyes set on El Salto where we could primitive camp. Primitive camping is very difficult to find in Mexico, so any chance we get we will take. 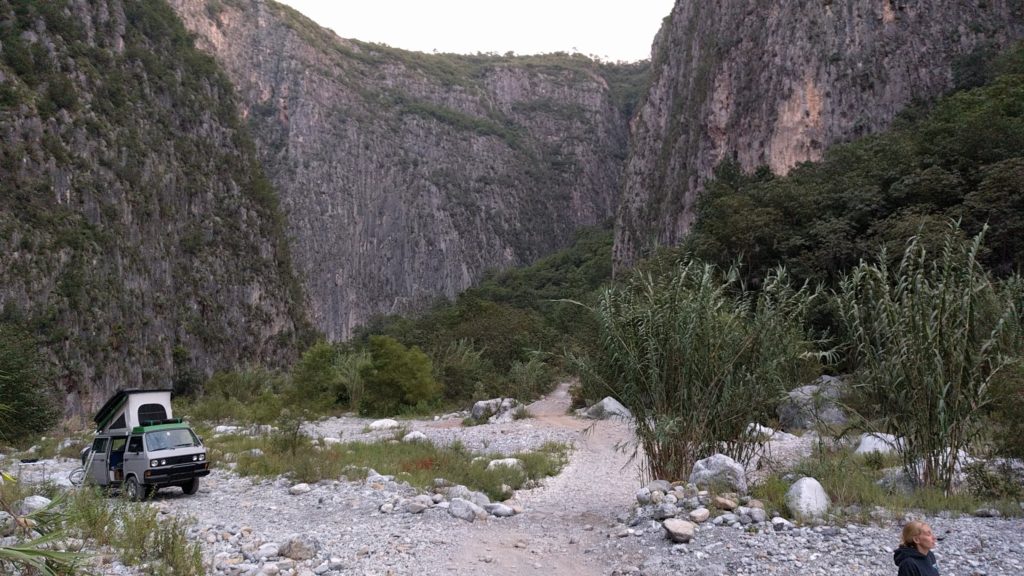 Once we broke through the dense city, we quickly exited onto a small mountain road. We saw a sign for tamales and stopped, where we were greeted by an elderly woman that makes them by hand every day. We gladly bought a dozen for $3 and continued on to one of the most beautiful and difficult mountain passes we’ve ever been on. In 25km we managed to gain 3000 feet! 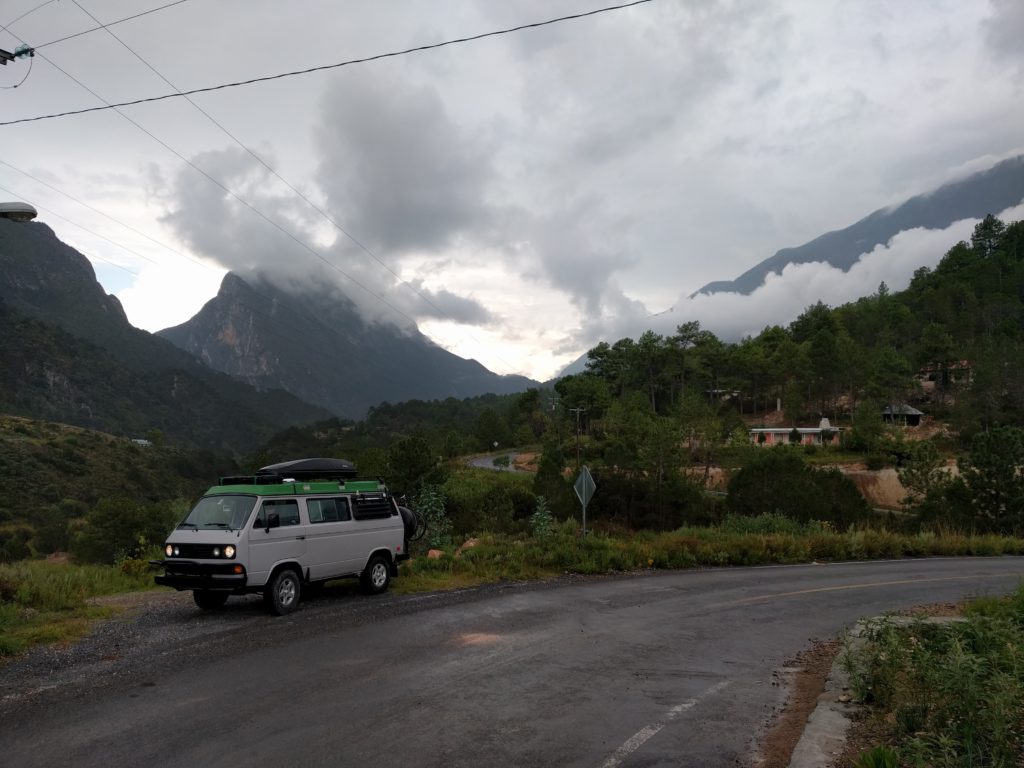 The ecosystem quickly went from high desert to subtropical with waterfalls and lush biota engulfing the road. Again, we were completely mesmerized by our surroundings, and we were grateful to have the power of a TDI engine underneath us. 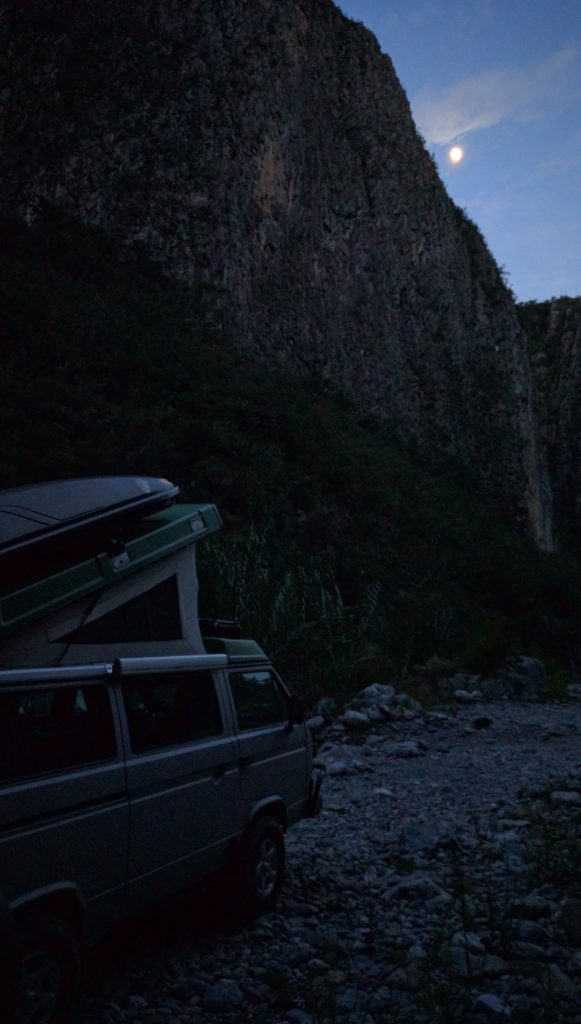 Having followed obscure directions from a rock climbing website, we picked our way through a rough road through a riverbed until we found an ideal camp spot. We had made it to El Salto! We hiked the road with fleeting daylight to get our bearings and see where the climbing is for the following day. Once back at camp we used our new grill and made carne asada tacos and watched the moon rise over the huge cliffs all around us. We fell asleep that night with ease and were awoken to the exotic sounds of hundreds of birds. 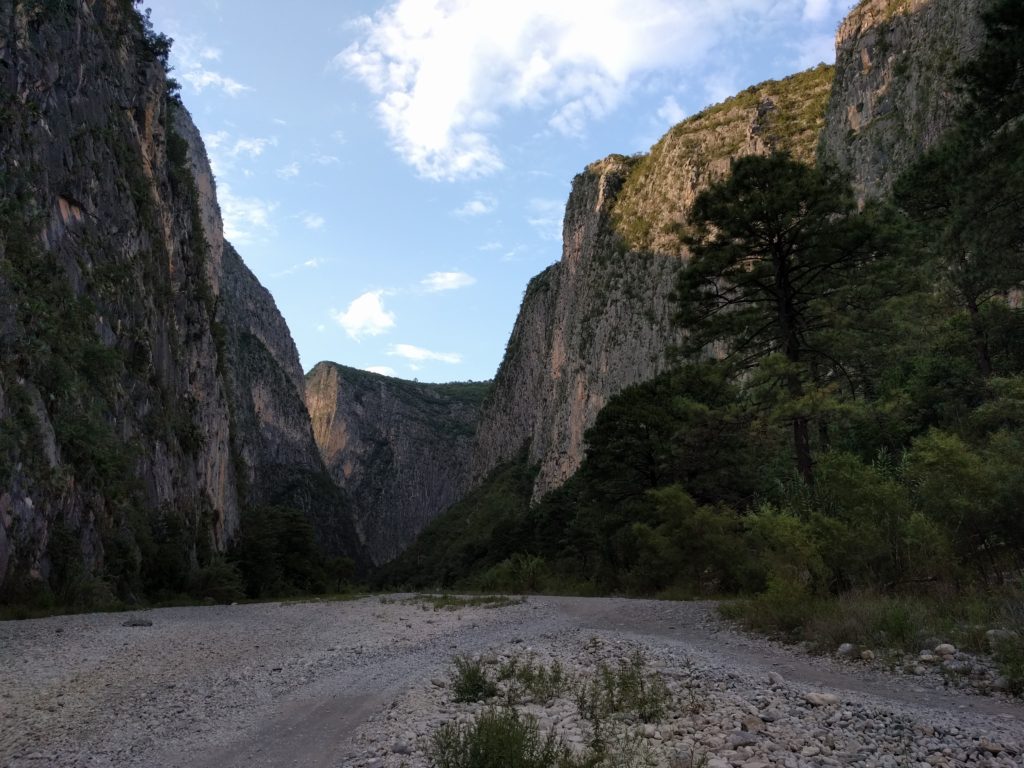 We awoke early to explore the canyon and hop on a route.  Descending into the canyon was pure amazement.  The size of the limestone walls surrounding us was incredible to say the least.  Near one of the climbing walls, we encountered some locals who were helping to conserve some ancient hieroglyphs.  Continuing further, we walked through the dry riverbed for over a mile, and around every corner all we could think was wow and wow! 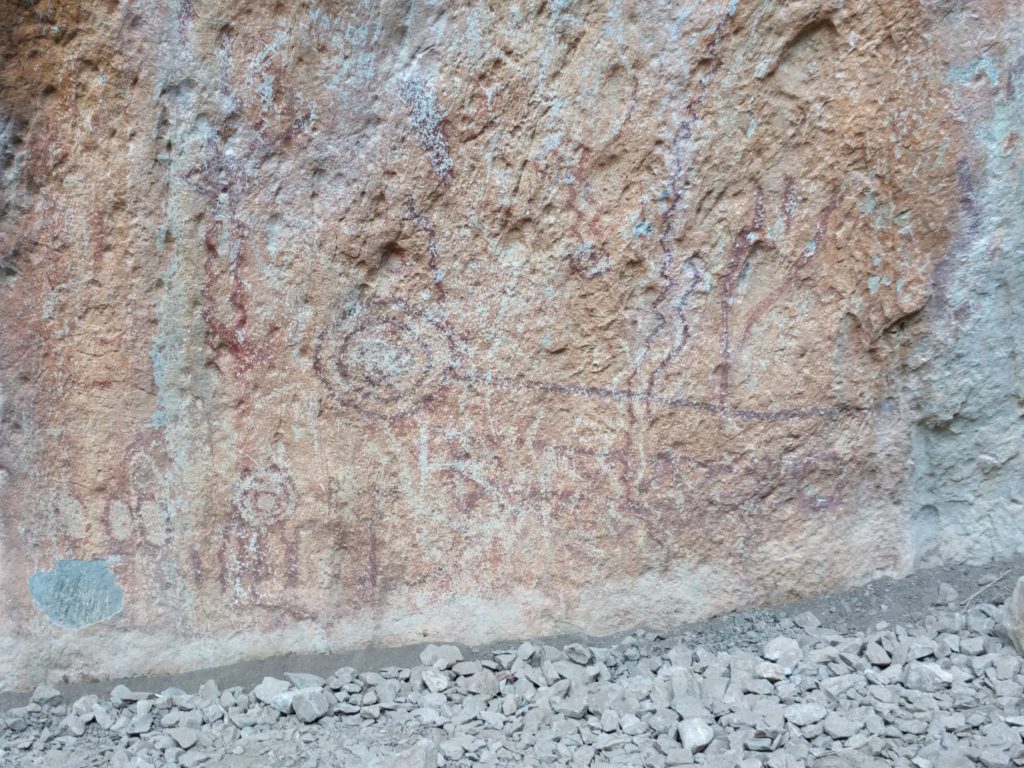 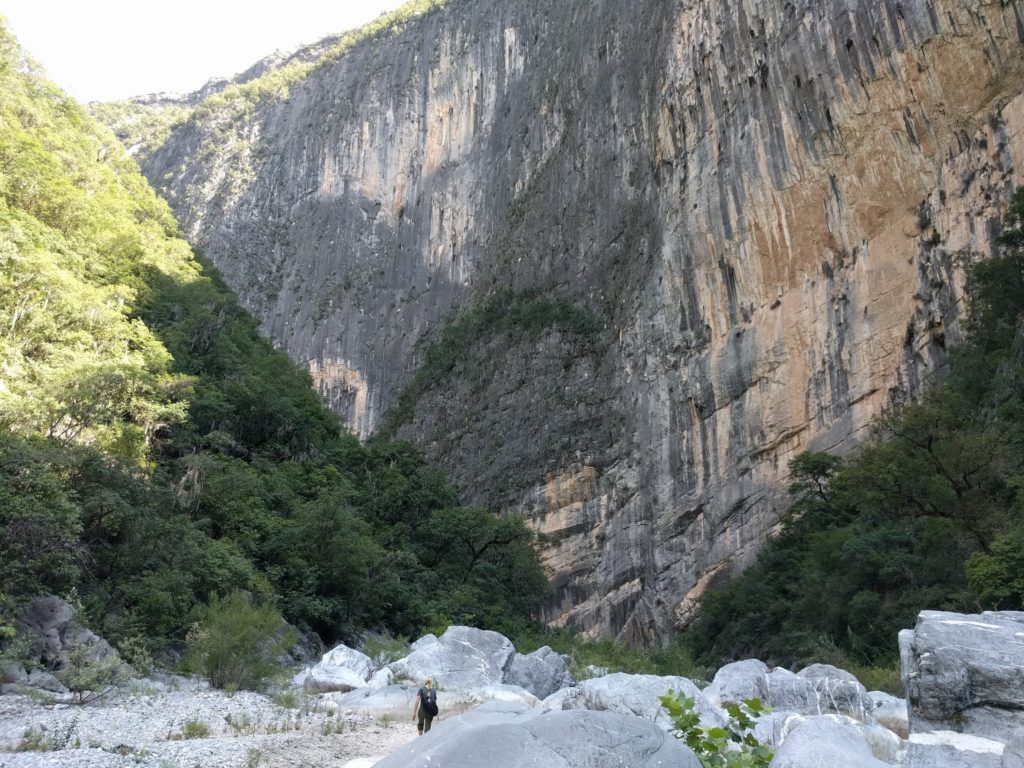 Do you see Sarah in the photo above and below?  The size of the cliff faces are incredible! 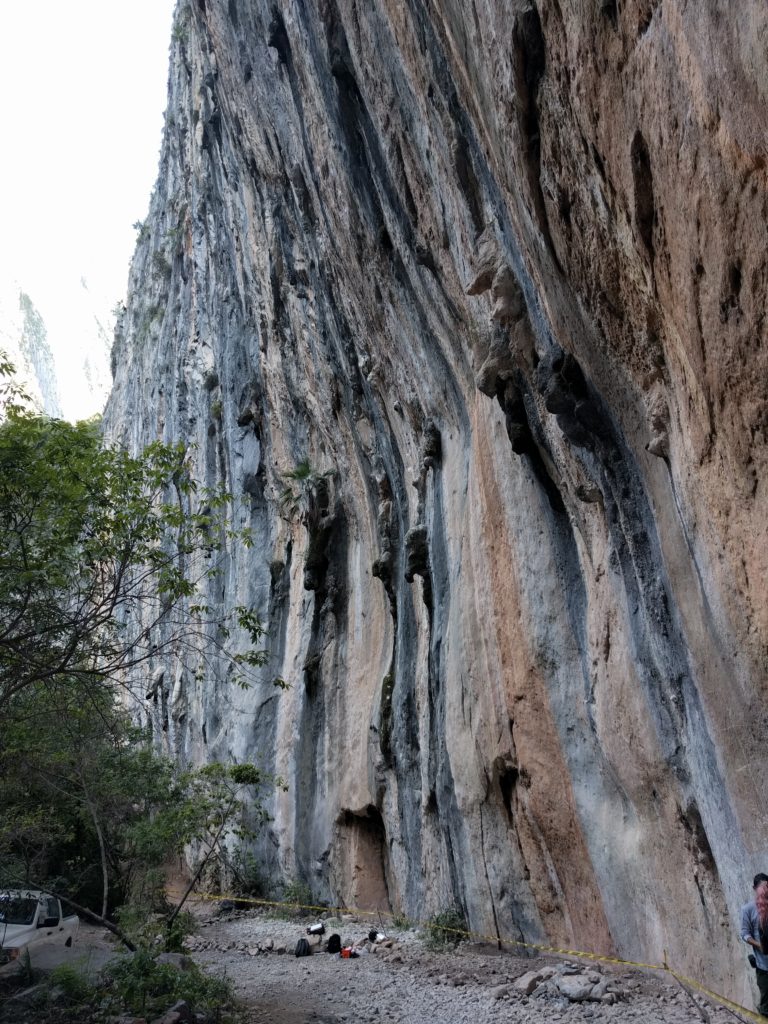 We hit the road again that day to make sure we get to Guadalajara for Mexico’s Independence Day and to visit with some of Sarah’s friends from her time when she lived and studied there.  The mountains of Northern Mexico will forever stay in our minds as serene beauty and friendly people.  Now, on to the big cities of Mexico!