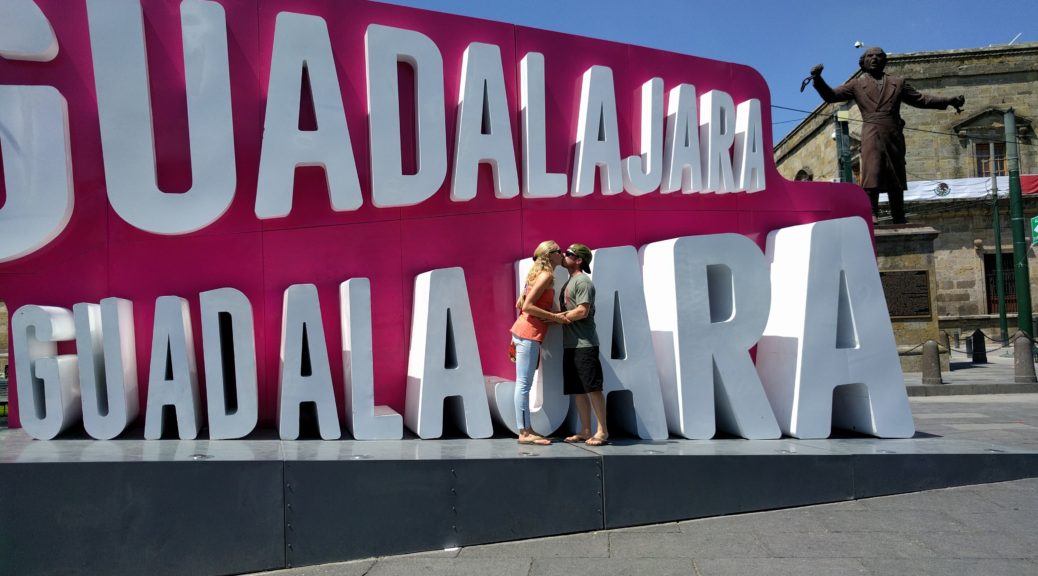 After leaving the beautiful mountains of Ñorthern Mexico, we had our sights set on arriving in Guadalajara to experience the Indepenence Day celebration known as “El Grito” which happens on the eve of September 16th.  Sarah spent a year living in Guadalajara studying for her degree in Spanish, so we were thrilled to see some of her old friends and spend some time in the city she had lived in a decade ago. 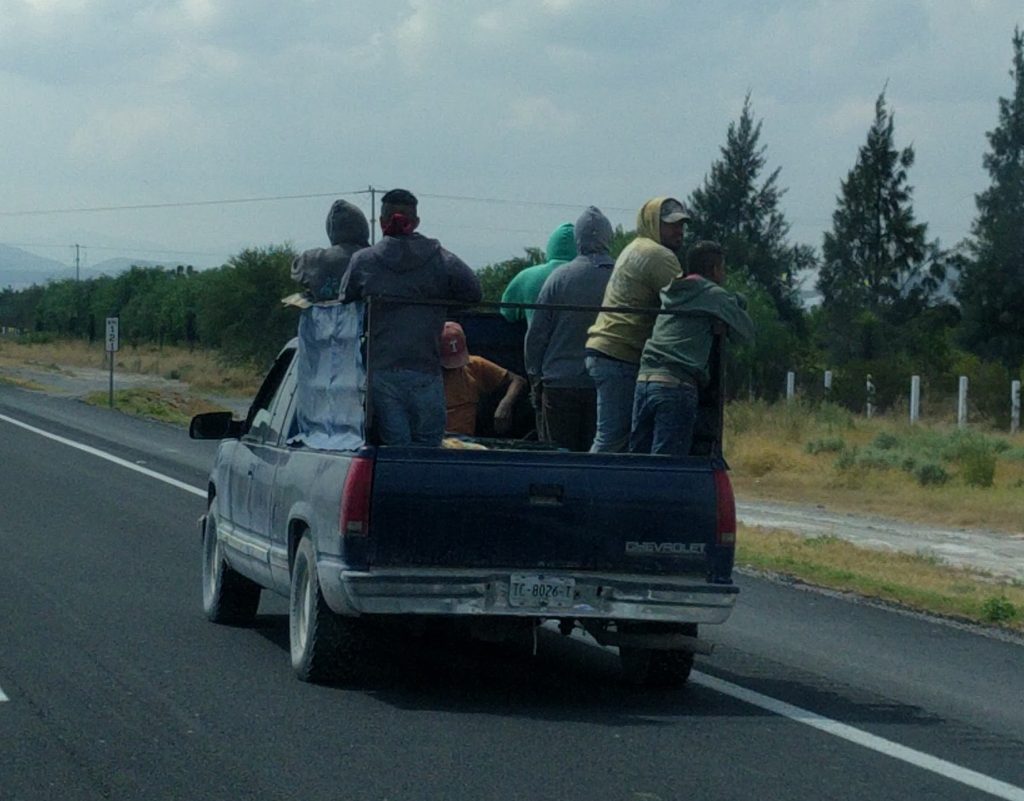 A long day of driving was planned from Matehuala where we had stopped for the night to the city, so stops were a must.  Our major stop was in the city of San Luis Potosi.  It was a very charming town with a lot of small cobble streets, vendors everywhere and what appeared to be a rich history.  Going into this trip we knew we wouldn’t be able to see everything or spend as much time as we’d like in every place of which San Luis Potosi was a fine example.  We later found out there was an ecologiocal preserve that would have been wonderful to see and explore. 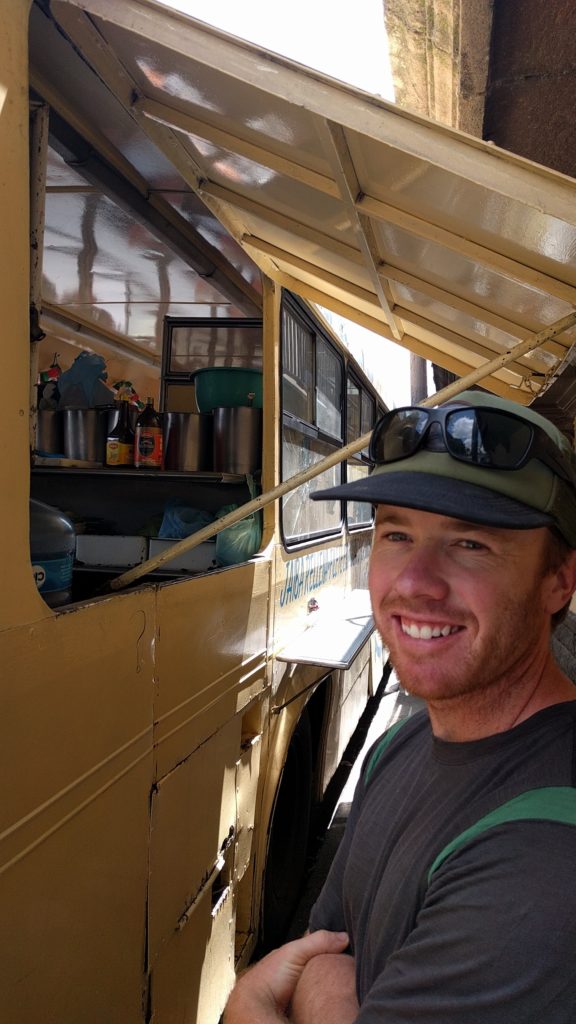 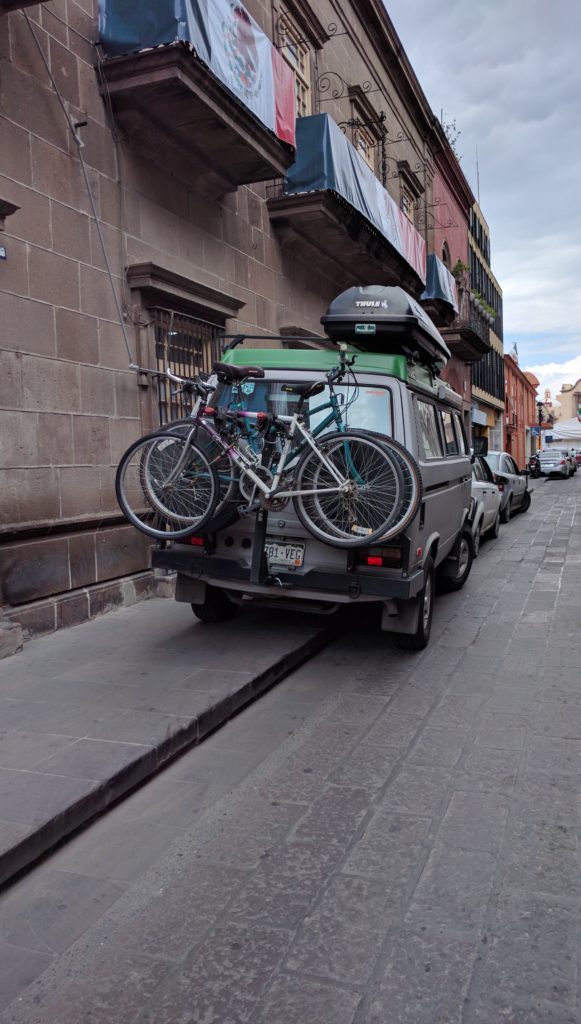 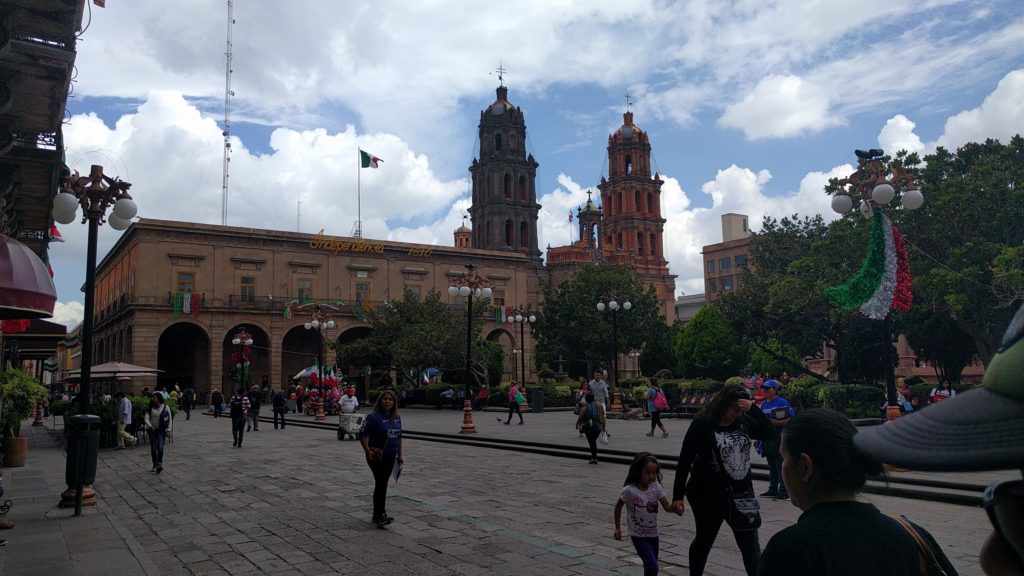 Our time in San Luis Potosi was short, but we enjoyed seeing the main plaza, buying new tires for our bike, having a Michelada (beer mixed with chili sauce, lime and salt), and a seafood cocktail. And then boom, we were on our way again!

We arrived late in Guadalajara on Wednesday, the eve of the Independence celebrations.  Sarah’s friend Memo, was excited to grab some food and drink and tell us about the activities we could partake in as well as catch up on life events.  He told us that every Wednesday there is a group bike ride through the main streets of the city with police ushers on all sides.  We immediately decided to enjoy this opportunity, and from 10p to 11:30p we rode all throughout the city at night, accompanied by the wide variety of people, bikes and music blasting from a few of the bikers. 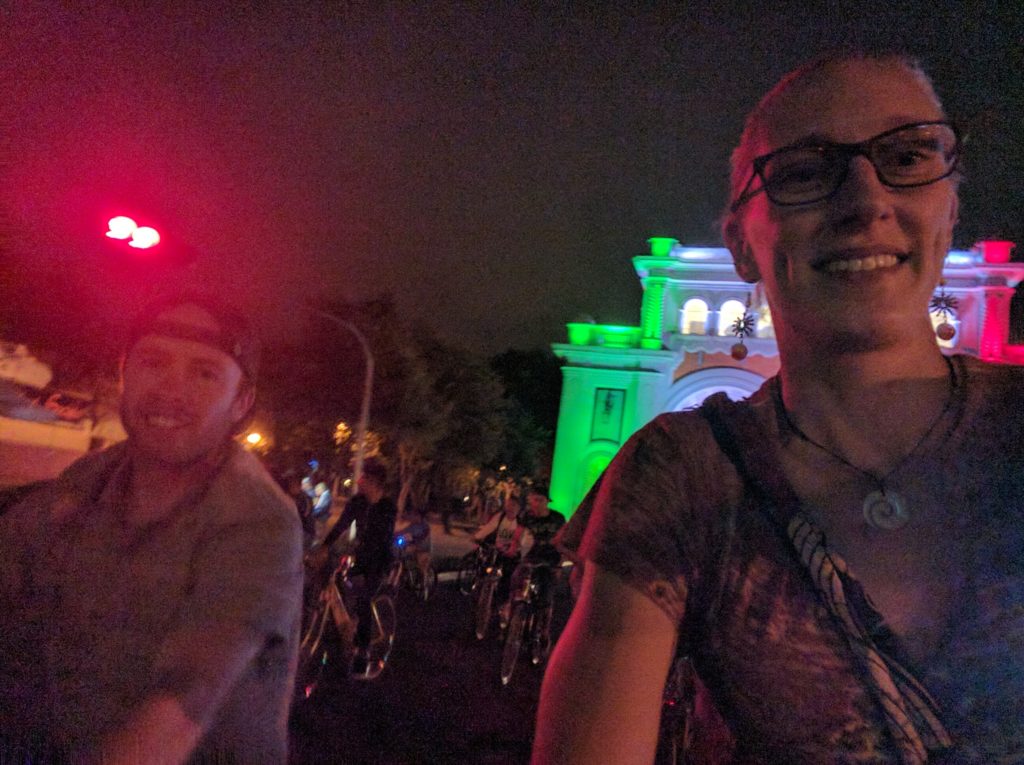 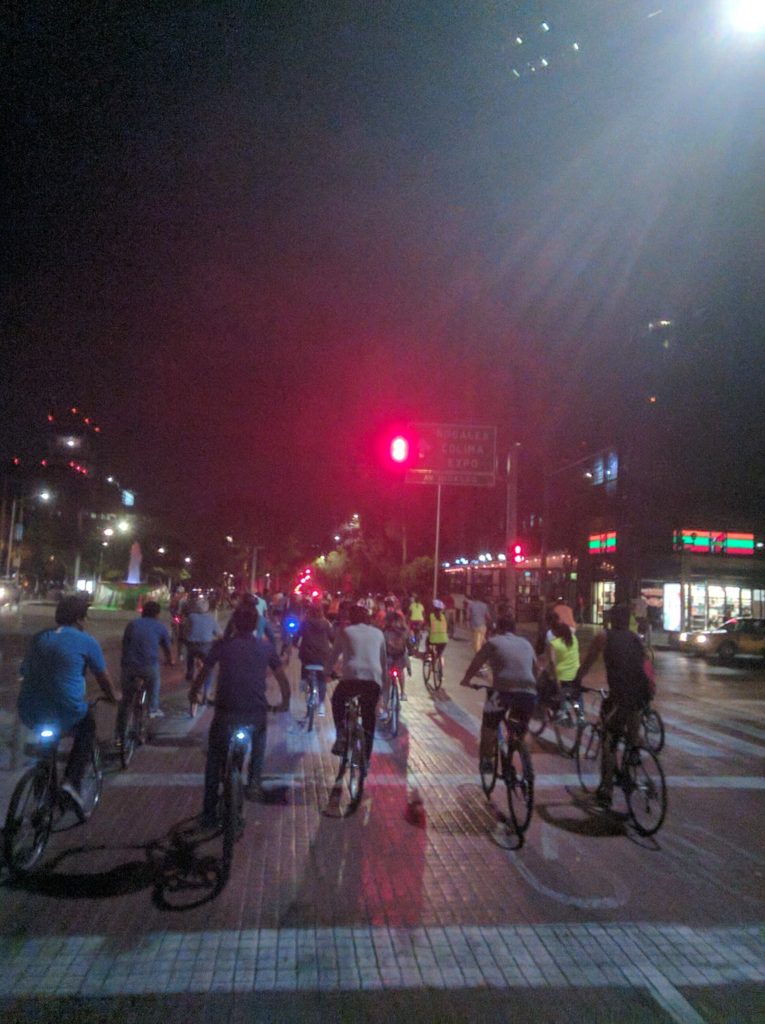 It was a truly great way to see the city on our first night.  We were able to park our van at Memo’s home behind a locked gate with his mom and sister happy to have us, so we fell asleep with ease after a long day of driving and biking. 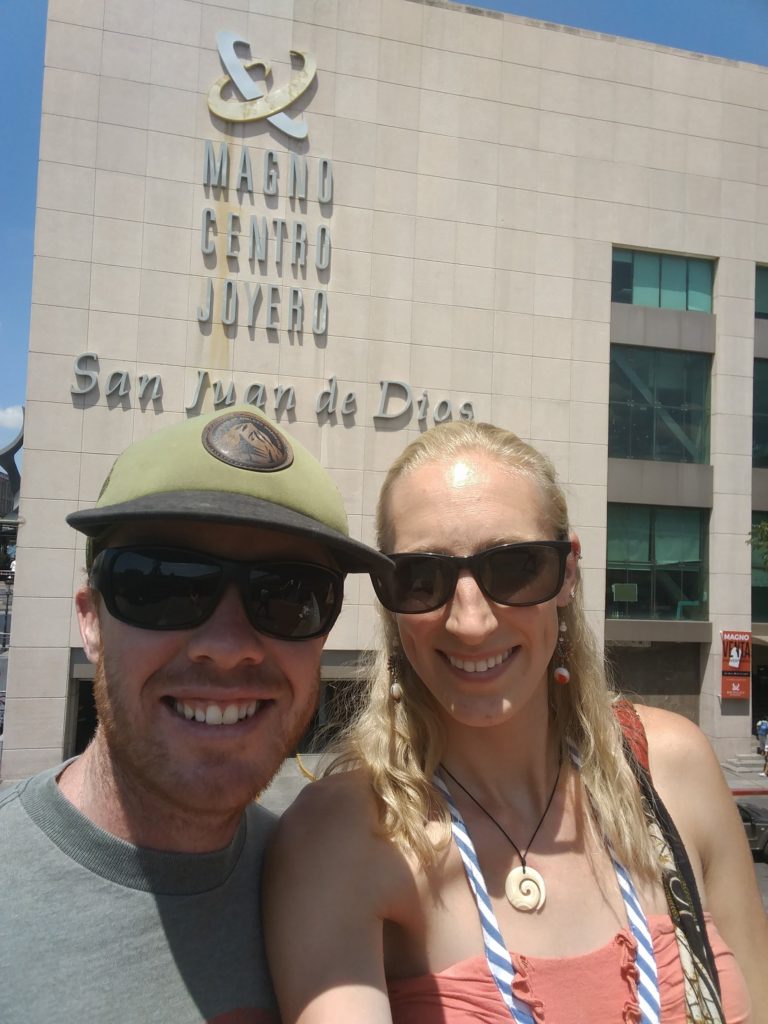 To start the day of celebration, Sarah took Matt downtown via the metro to get our bearings for the night ahead and experience downtown Guadalajara. Hopping off the metro, we landed in San Juan de Dios, the largest indoor market in Latin America (40,000 sq meters) which includes 2,980 kiosks! 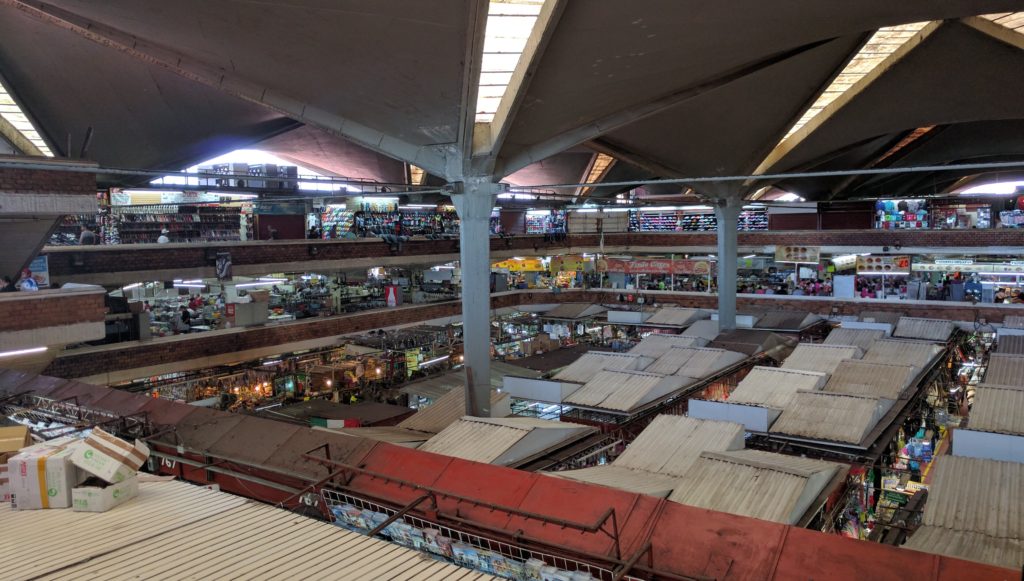 Everything from clothing, trinkets, hand crafts, food (oh the food), and anything you could think of really, was at this market. 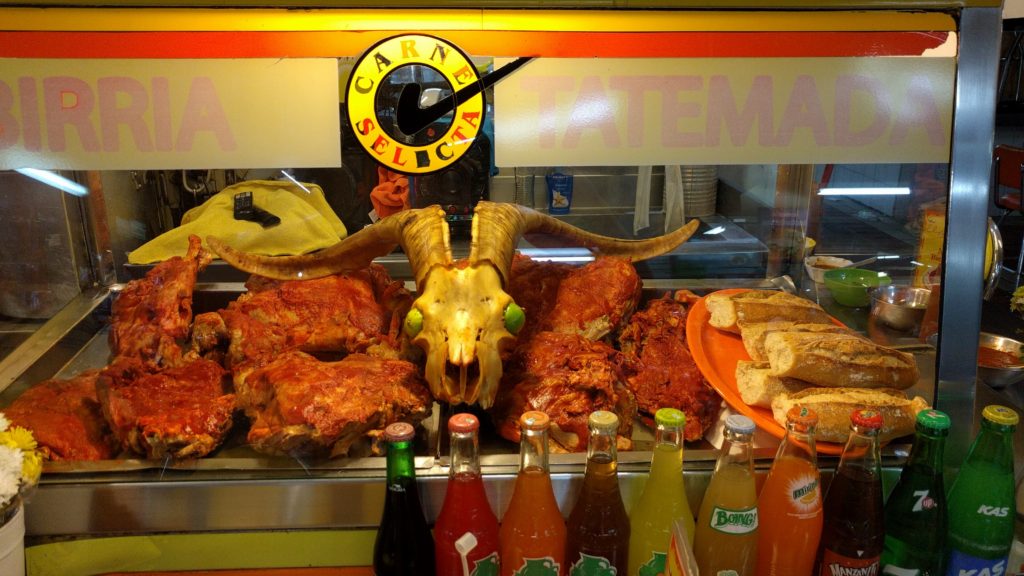 We were even able to make some copies of keys we needed that were specific to VW, and sure enough, they had the exact VW blanks. 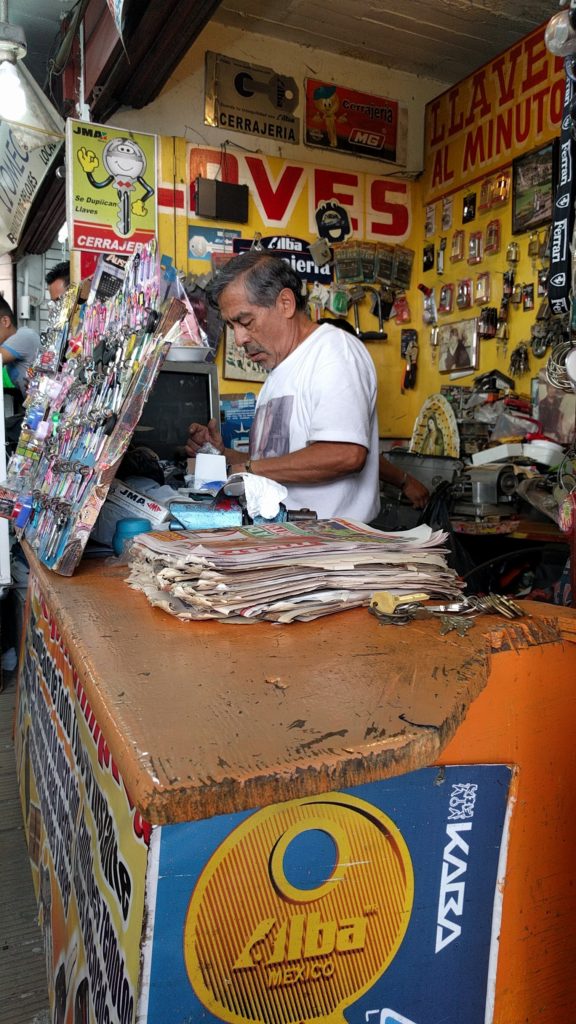 As for food, Matt tried his first tortas ahogada, which is a specialty food specific to Guadalajara.  It consists of a mexican baguette filled with delicious pork and smothered in a red chili sauce, topped with onions.  Words cannot describe the sensations of this dish, and we went on to eat one daily while we were in the city. 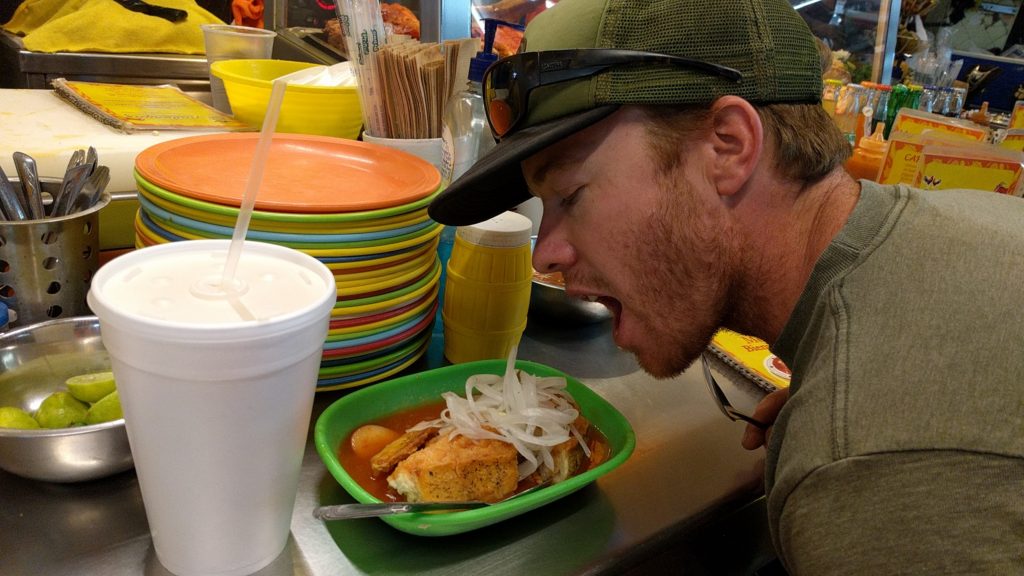 From the market we walked through all of downtown, enjoying the colloquial city with beautiful basilicas, theaters, statues and Plazas. 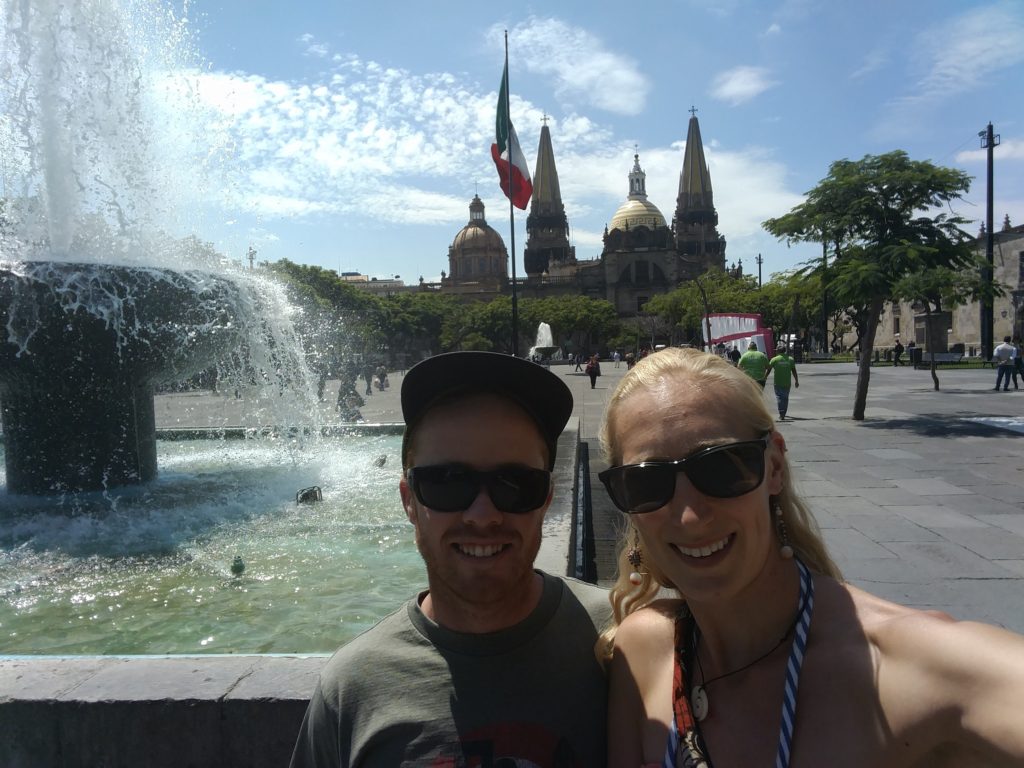 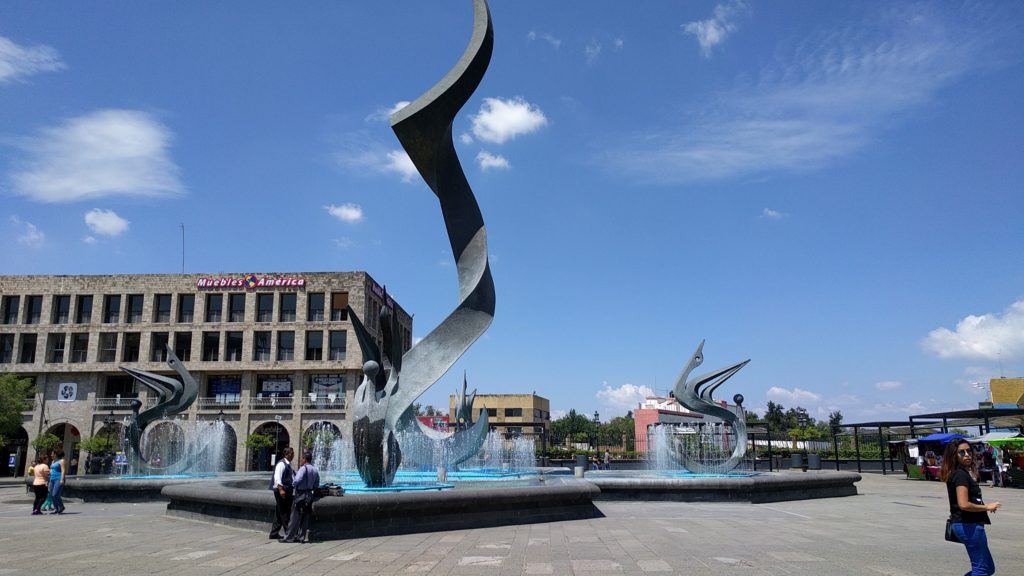 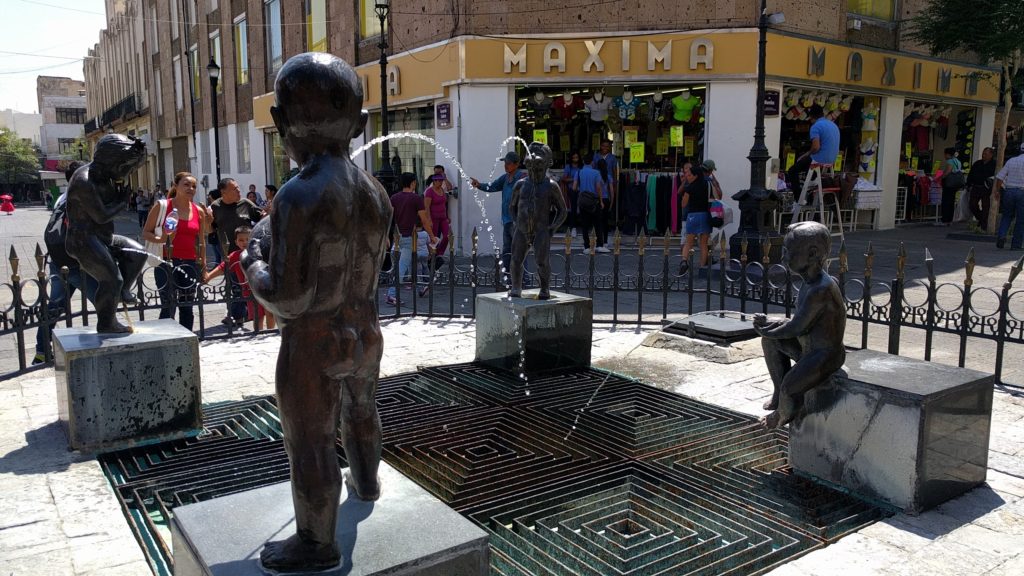 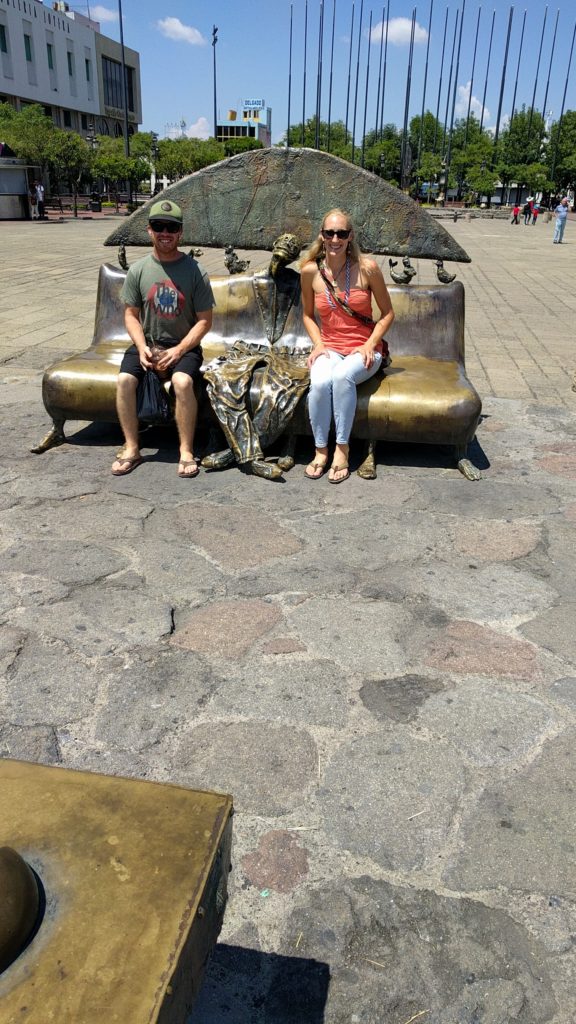 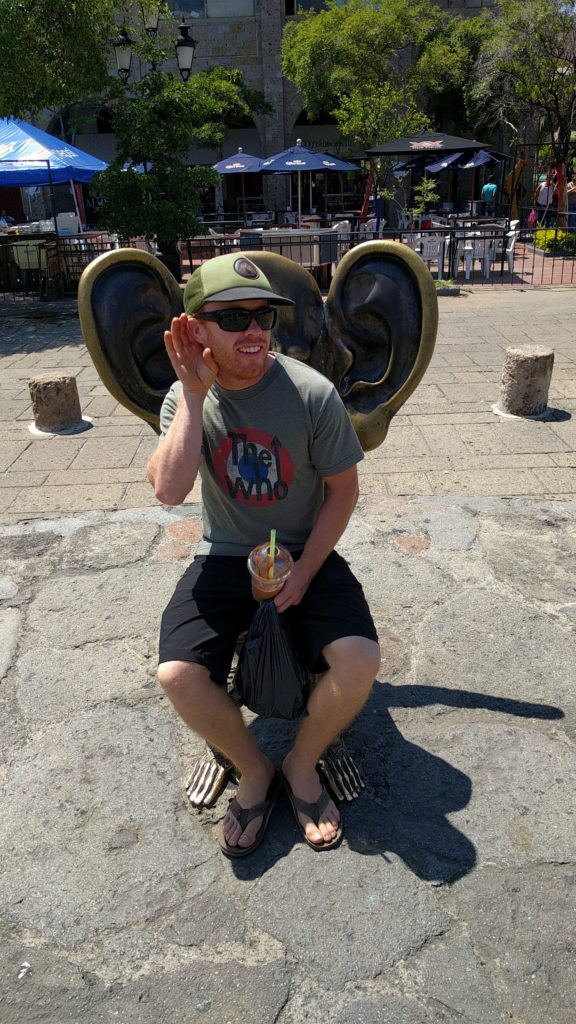 After returning to the house for a quick nap and shower, we were ready to head back downtown for the celebrations.  First we needed to grab a bite to eat, so we indulged in tacos al pastor, a speciality throughout mexico. 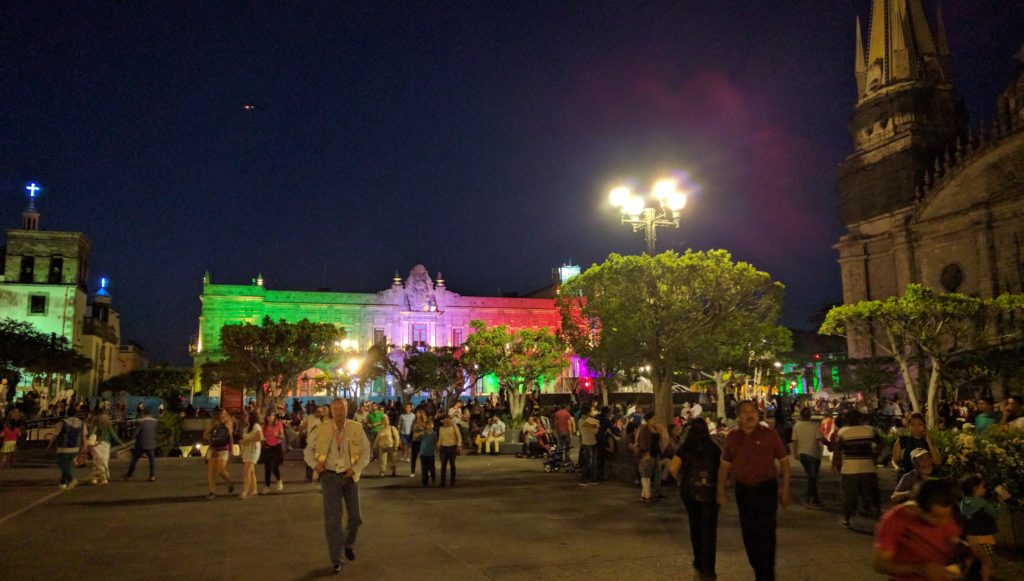 Afterwards we made our way to Plaza de Armas, where we were greeted with a scene of pure excitement and joy, with aromas, sounds and lights filling our senses at every corner.  A full band was playing on stage near the government palacio where “el Grito” was to take place.  While we had the chance, we posted up on the fence in front of the palacio for the night, so we could have a good view of el grito. 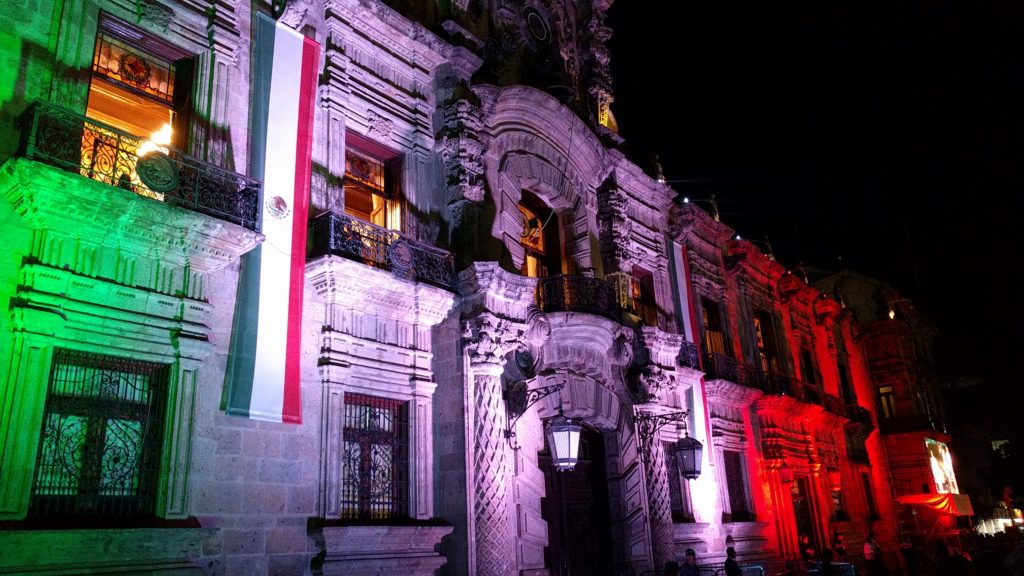 Once the band was finished, performers filled the stage to recreate the battles that took place during the revolution and eventual independence from Spain in 1821.  The performance was incredible and really showed Mexico’s distinguished tastes for the arts. 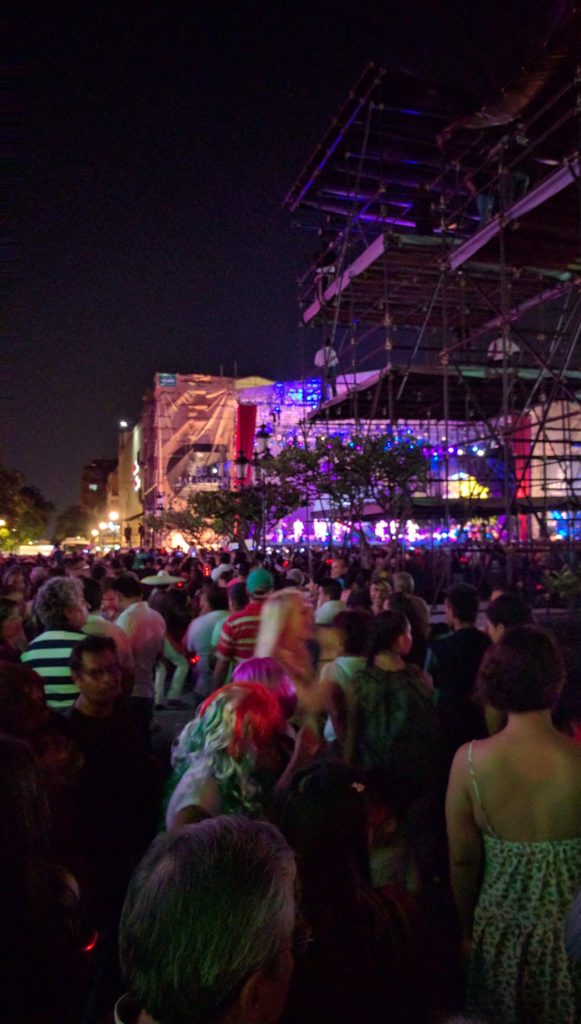 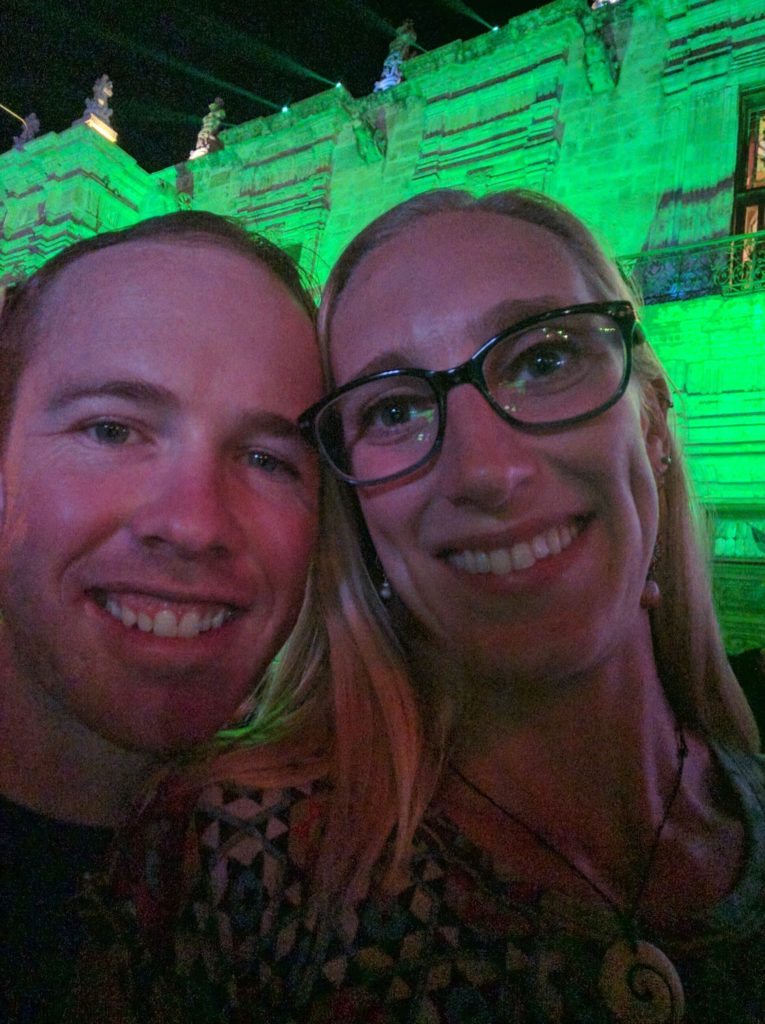 Following the performance, the governor of Jalisco came out bearing a Mexican flag and began el Grito.  It included chants about being freed from oppression and moving forward as a sovereign nation with every proclamation ending with Viva Mexico, at which point the entire square filled with thousands of people yelling back “Viva!”  It was quite the spectacle and we could feel the pride in every person there emanating from each chant. 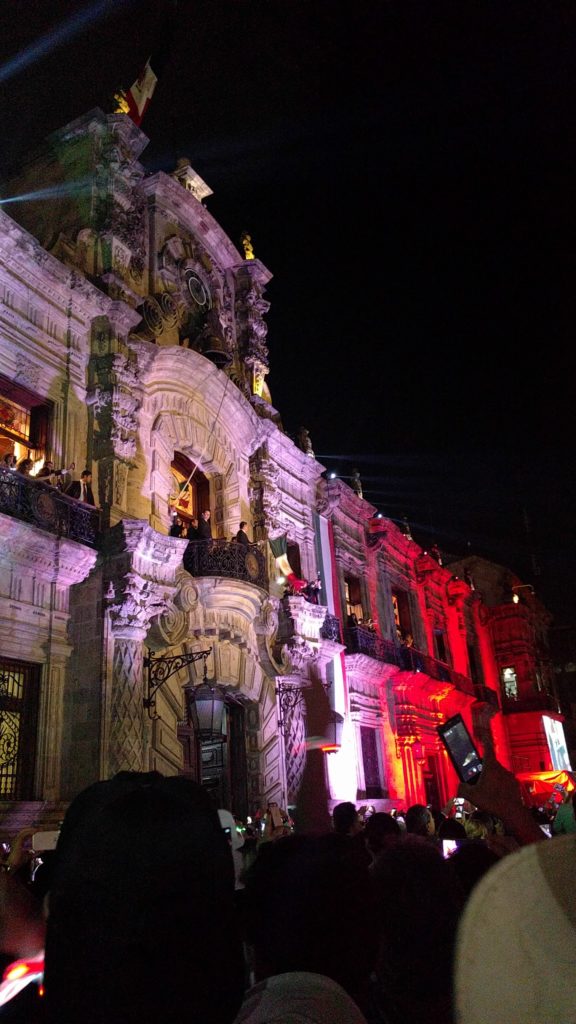 An elaborate fireworks show followed with danceable music and free foods such as churros, cotton candy, papas and corn being passed around the crowd. 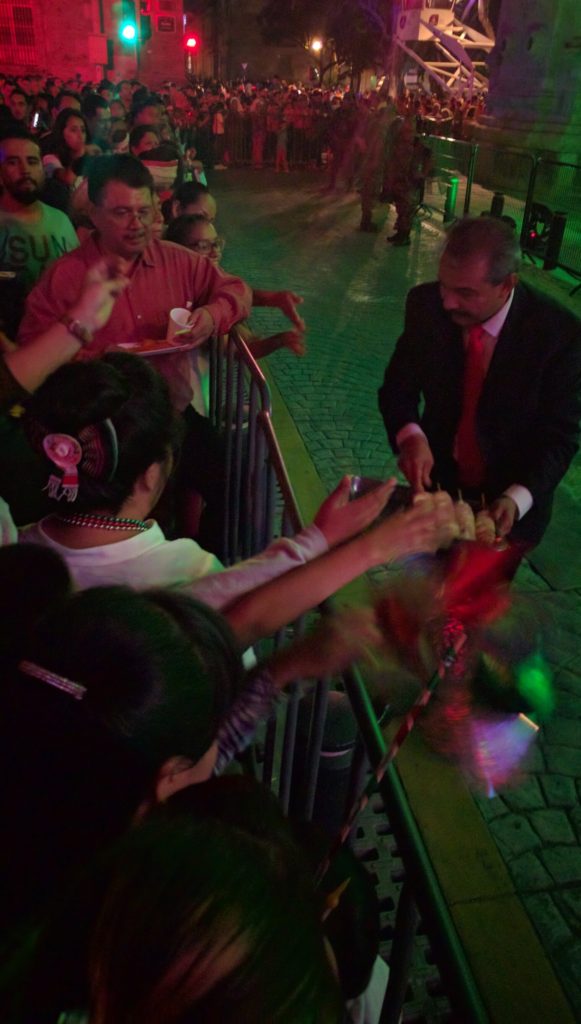 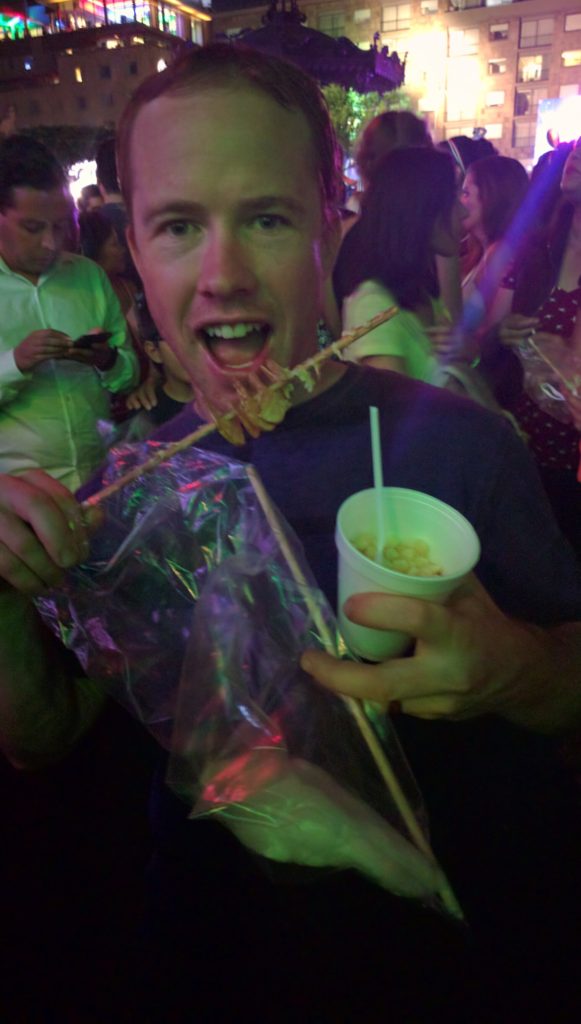 We slowly made our way back to the metro recollecting what we had just witnessed, and felt proud knowing our neighbors to the south have such a strong sense of patriotism for their wonderful country.  Viva Mexico! 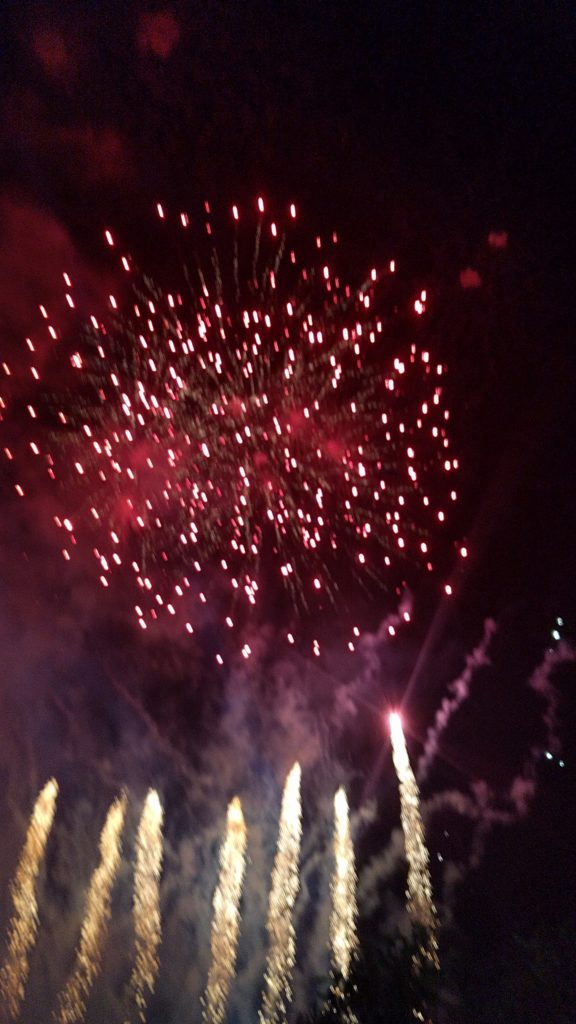