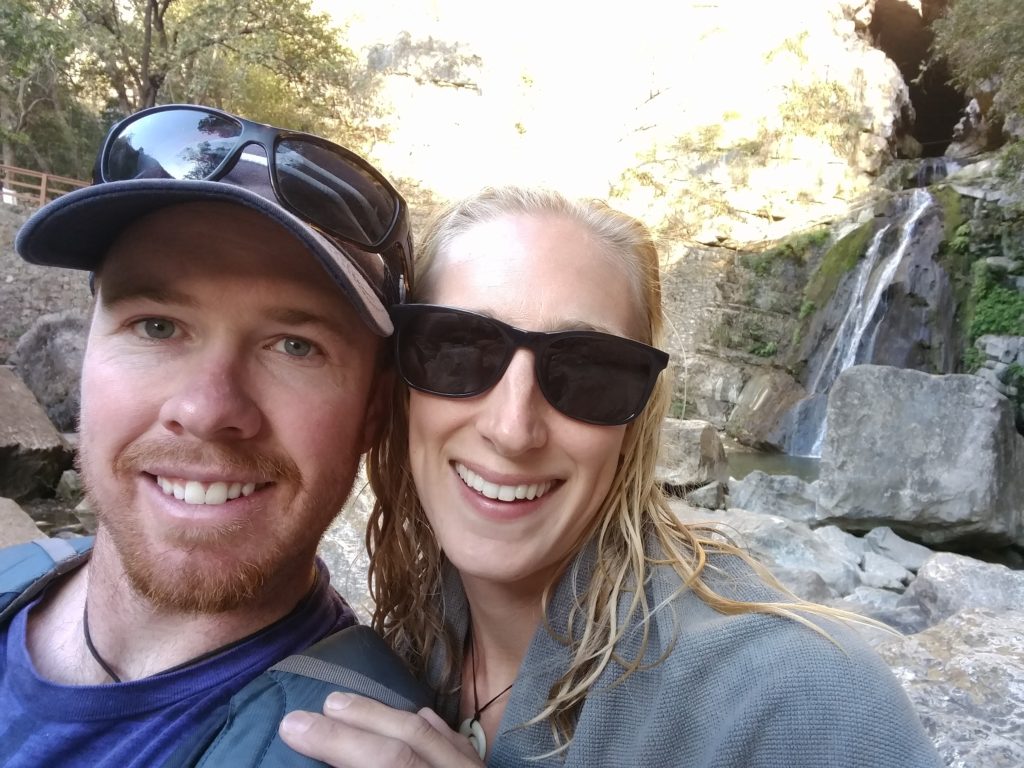 Feeling good about our time spent in San Cristobal, we ventured further west towards Tuxla/Gutierrez, the capitol of Chiapas, where we had plans to venture up the famous Sumidero Canyon by boat. After descending 6000ft and feeling the heat of lower elevation, we stopped off at another hidden natural beauty, Cascada el Chorreadero. Here we were surrounded by gorgeous pools filled with a waterfall descending from a huge cave system. 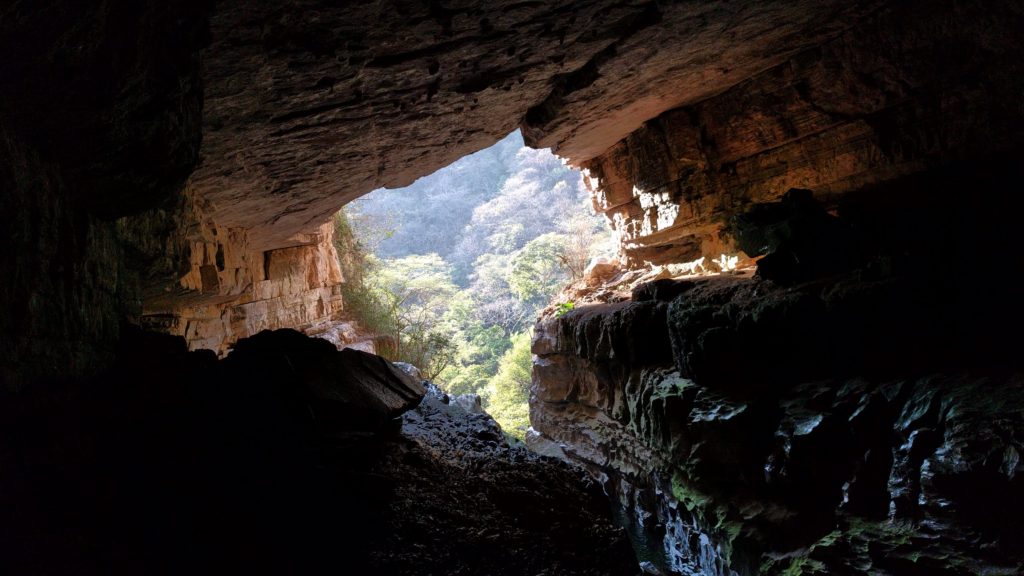 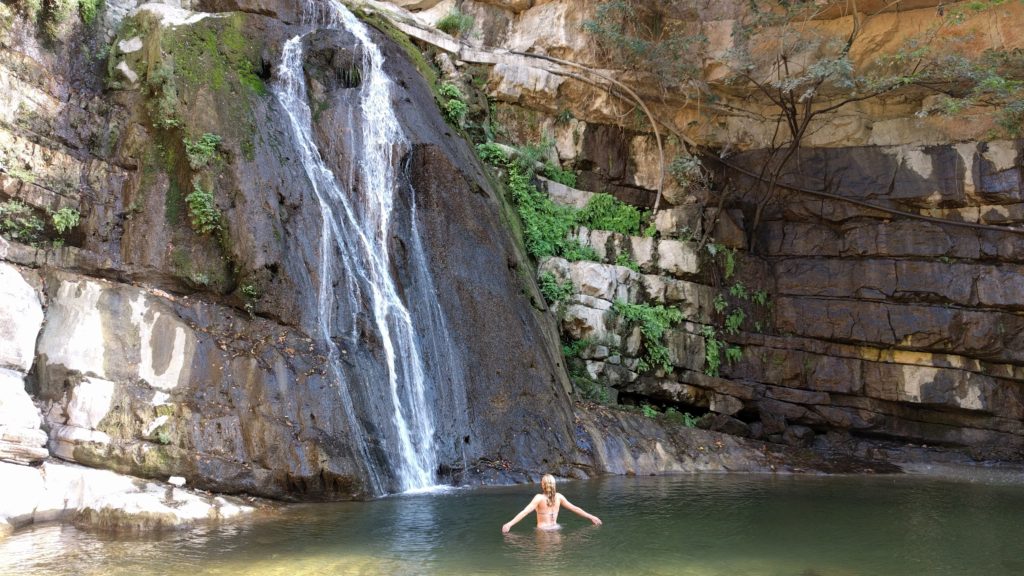 After a wonderful afternoon soaking up the sun, we planned to find a stealth camp spot at a gas station near the entrance to the canyon for a tour the following day. Sometimes plans have a way of changing when you least expect it, especially when life is always in motion and on the road. 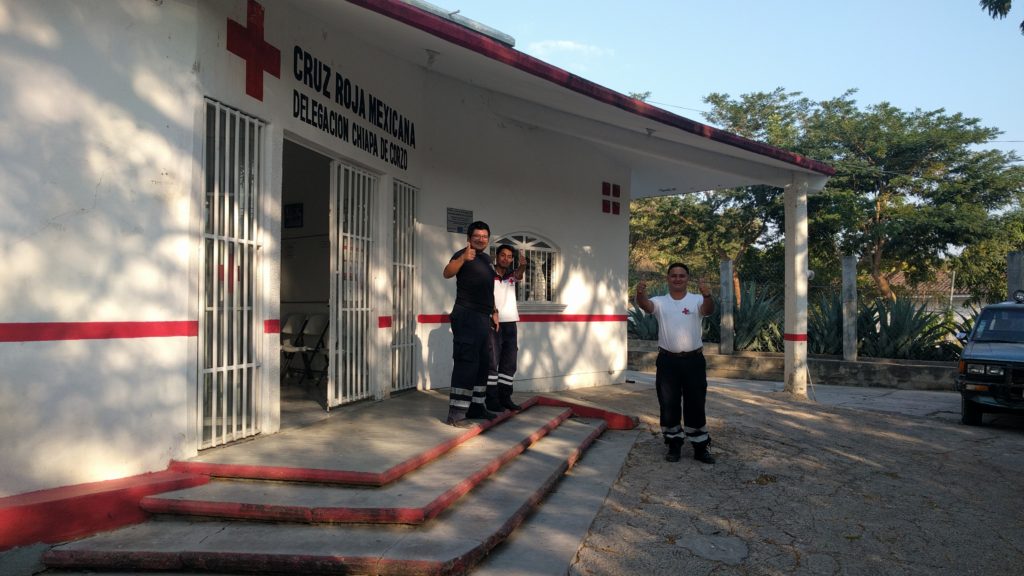 While talking to a friendly employee at a gas station were we hoped to park for the night, Matt began to feel very ill and lost sensation in his limbs. Sarah quickly drove him to a red cross facility just around the corner to make sure nothing was terribly wrong. On the way, Matt vomited violently which did help him feel better upon arrival. He was put on oxygen to be safe and after 30 minutes of feeling a bit better, he began to feel ill in the same way again. He then lost consciousness and had a seizure episode. The medic immediately called an ambulance and backup. After 3 failed attempts at inserting an IV, the 4th was successful to provide a saline solution for the ambulance ride. Matt didn’t realize the severity of what had happened while in the ambulance, but was later informed by Sarah about the convulsion.

After finally arriving at a private clinic due to the public hospital being full, Matt began feeling a little better although slightly freaked out about what had just happened. A few more hours were spent in the private clinic while a blood test was completed. After nothing abnormal was reported, and not being taken seriously by the medical staff, we left and slept in the van near the clinic in case anything else happened. To add a little more flavor to the frightening situation, while Sarah followed the ambulance to the clinic, the brakes went out on the van. Fortunately the front disc brakes were able to engage just enough to stop Koru safely. 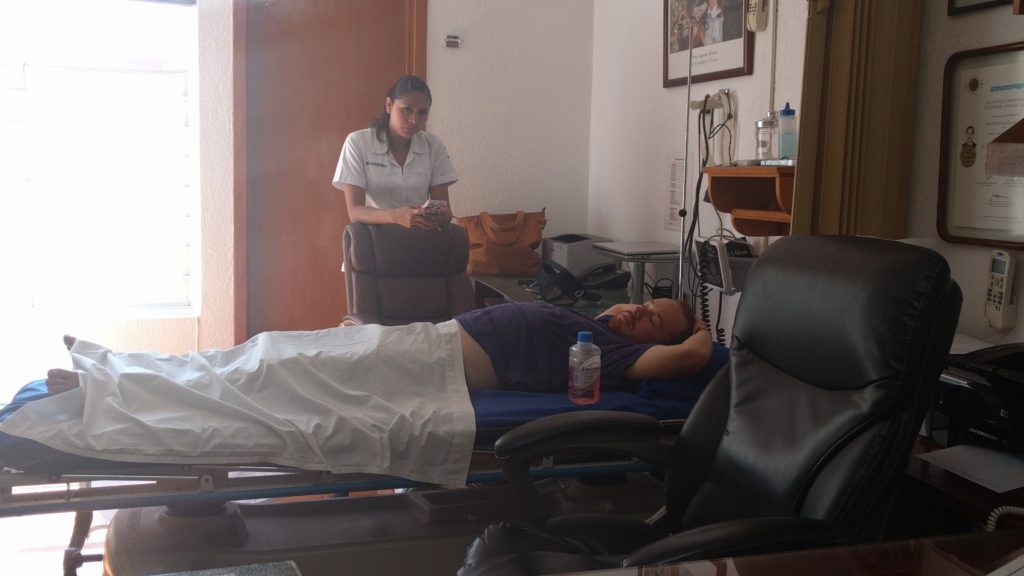 The following day we decided to see a gastrointestinal specialist because Matt’s primary symptoms were stomach related. After some further testing, all systems appeared normal. With some excellent consultations from Matt’s sister Allie, who is in medical school, we suspected it was likely a bad case of giardia. The seizure could have been from an electrolyte deficiency due to dehydration from being in the sun, which happened to coincide with giardia at the same time. In the end, Matt took some parasite medicine and stayed as hydrated as possible while staying 2 nights in a hotel room to recover.

With Matt feeling better and both of us eager to move on, we proceeded to tackle the brake issue.  We noticed the brake fluid reservoir was empty and first decided to refill the lines and get any air out of the system by bleeding the brakes. After just a few minutes, brake fluid was all over the hotel parking lot floor and we knew something bad had happened.  After a more detailed inspection we determined that a rear brake line had burst at a rusty bend directly behind the transmission.  After chatting with our good friend Karl, we tried to tackle the repair ourselves, but quickly realized the help of a mechanic was needed. Within 5 minutes of looking for one a few blocks a way, a nice old lady called someone she knew to help.

It was already late in the afternoon and we didn’t think much could happen until the following day. At 4:30 in the afternoon, the mechanic the lady called came over to the hotel and looked over our needed repair. He was shocked by how tight the syncro components were under the van but decided he could help us anyway. We asked if it would be better to wait until the next day, but he didn’t seem to care and wanted to get started. 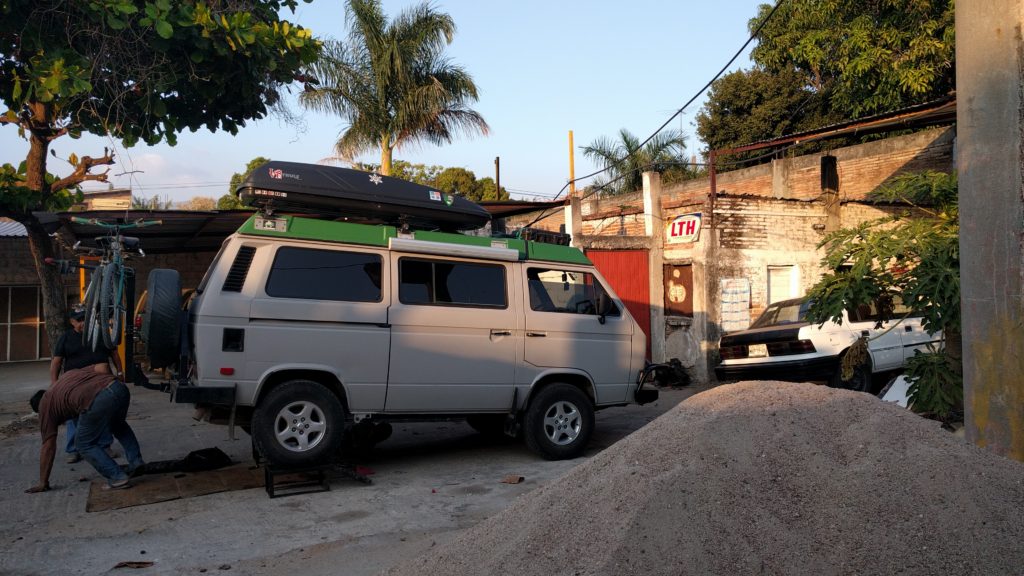 With Matt’s help under the van and Sarah on point translating, he had the faulty brake line off in no time. The next effort was to find the part to replace it. The mechanic knew it would not be easy, so his friend had us hop in his car while he drove all over the city looking for the correct part. After 3 tries, we finally found a part’s store that could connect two brake lines together to create the length we needed for the repair. Without the help of the mechanic’s friend, we never would have found it ourselves. 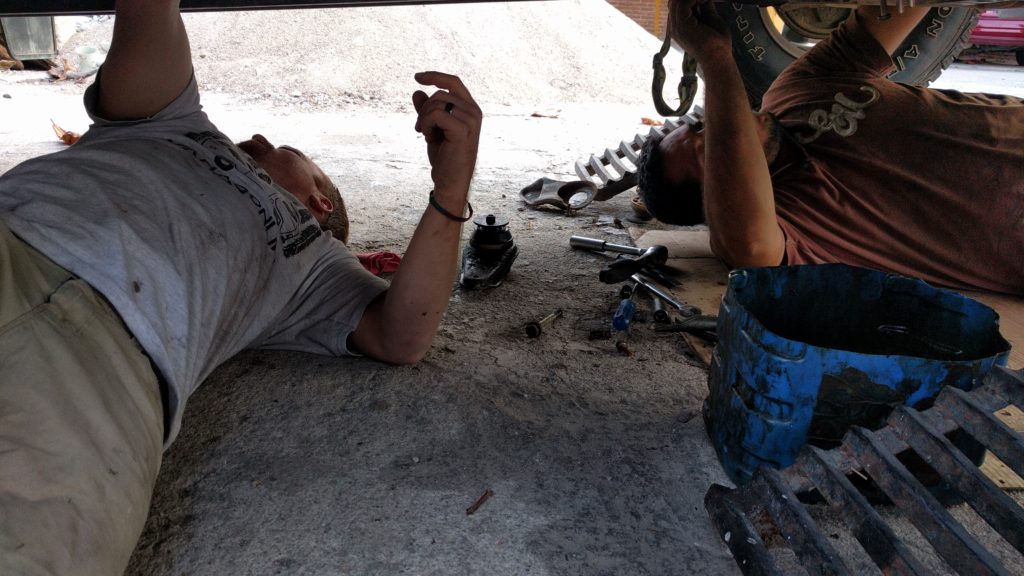 Upon return, the sun had set and we anticipated waiting until the next day to finish, but that is not how hard working Mexicans see things. He quickly set out to bend the new brake line to mimic the original and replace it. He wanted it installed and tested before calling it a day. So, with the focus and skill of a wizard, he installed the lines, bled the rear brakes and tightened everything as it should be, all at a pace far beyond our capabilities. When he was satisfied our brakes were fully functioning again it was almost 9pm and we all decided it best to replace the remaining nuts and bolts the next morning. Knowing that the fix was a success felt great.  We gave them the rest of our beers and went to celebrate our little victories with some good food and clean water.  The long day ended back at the hotel where we rested easy knowing Matt and Koru were feeling better.

Often times the universe has a way of communicating in rounds of three. While Sarah was using an ATM the following morning so we could pay the mechanic, the machine decided to eat the card as if it was its last meal, never to be returned again. Fortunately we have a backup, but we decided that this must be the last round of bad luck for at least a few months.

Back at the mechanics, we helped replace everything and did a final bleed of the brakes and were on our way.  Again, we paid 120 pesos/hour and gave both the mechanic and his friend a gracious tip for going to incredible lengths to help us get back on the road. We left the shop with our hearts full of joy, not just for the health of van and man, but for the genuine compassion and care fellow humans can have for each other. 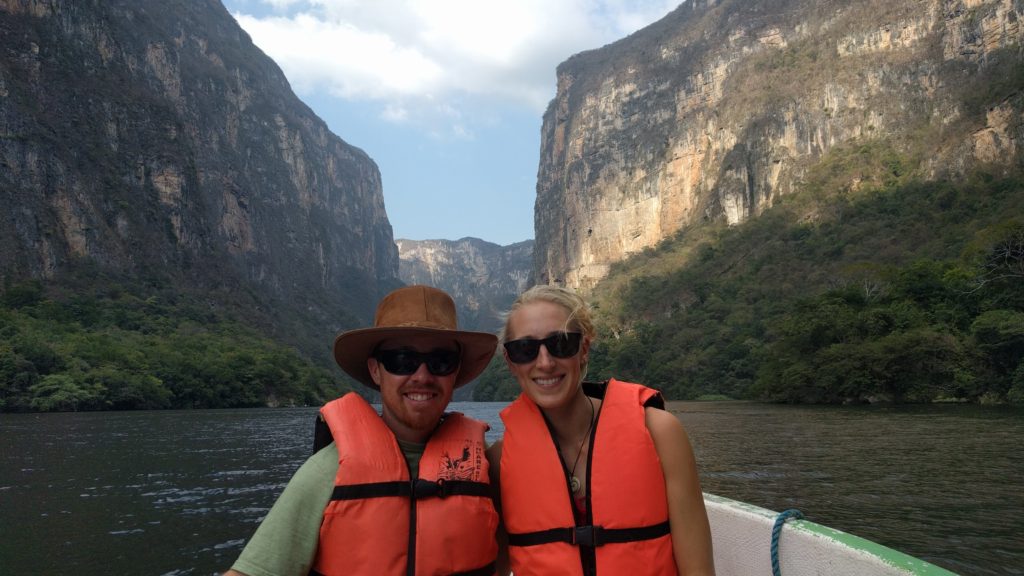 That afternoon we set out towards the canyon to take our boat ride we’d planned to do 3 days prior.  And what a sight it was! 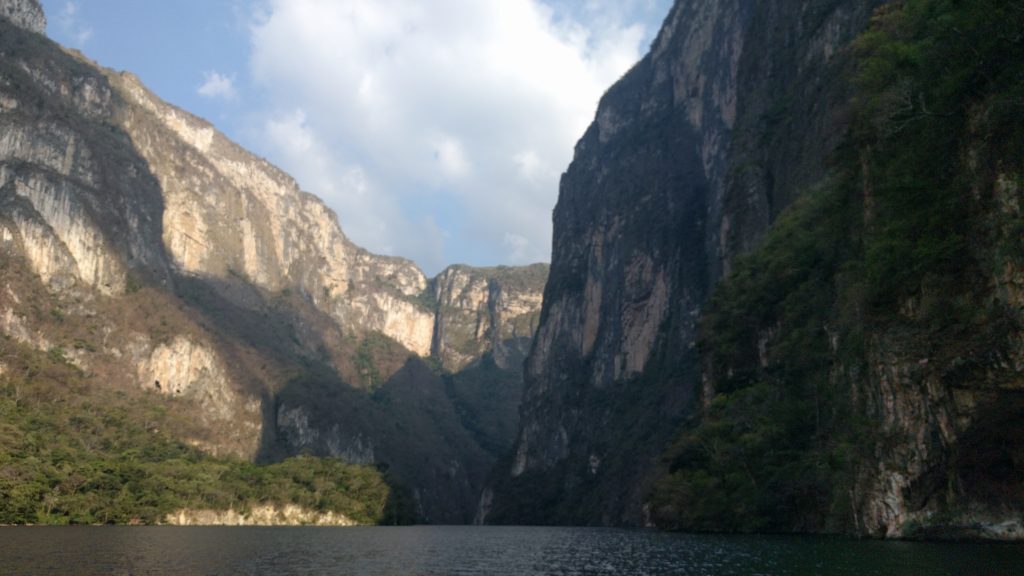 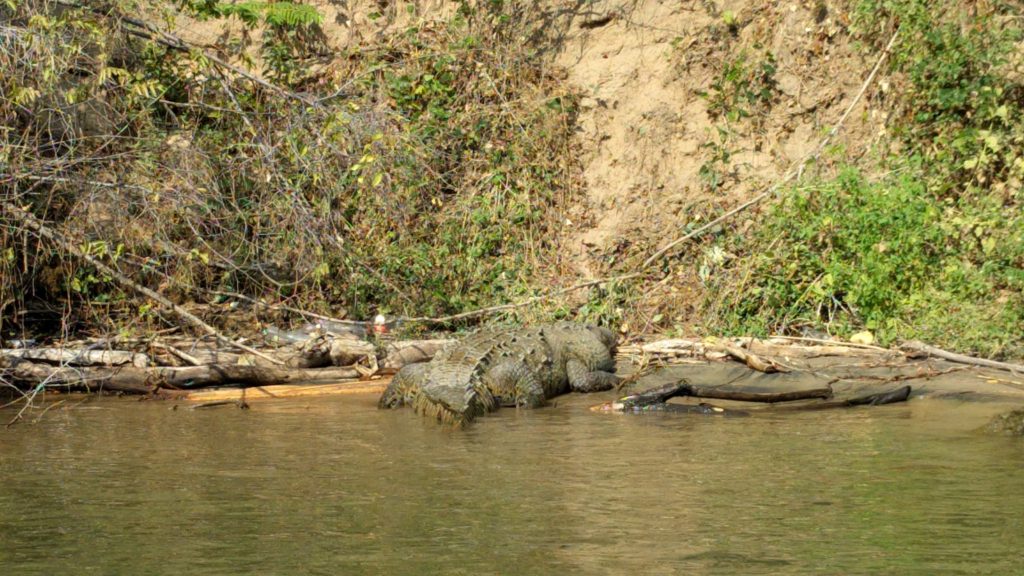 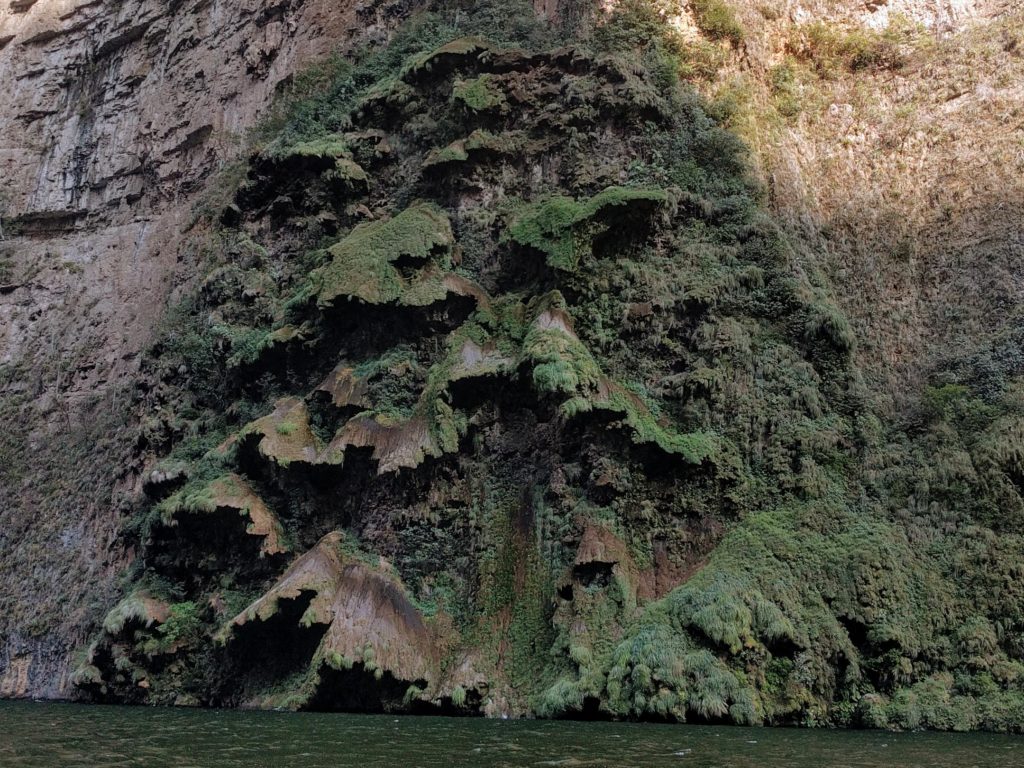 We witnessed crocodiles, waterfalls, birds and striking canyons throughout the boat ride, some with seeps that create carbonate tree-like features along the cliff side. It felt good to be back in nature again, and we were thrilled to be kruisin again!

The following day, we decided to pull off the road from a small sign saying “waterfall ⇒.”  And what a treat it was! After descending more than 800 steps, we found ourselves in another magnificent limestone canyon with a river. The crystal clear river and amazing waterfalls created by one of the seeps high upon the cliff faces rejuvenated our spirits and left us thinking about how many other countless wonders were in this region of Mexico.  Chiapas has continued to impress us with its friendly cities, countless natural wonders full of wildlife, diverse biota, clean rivers, and rugged mountains. 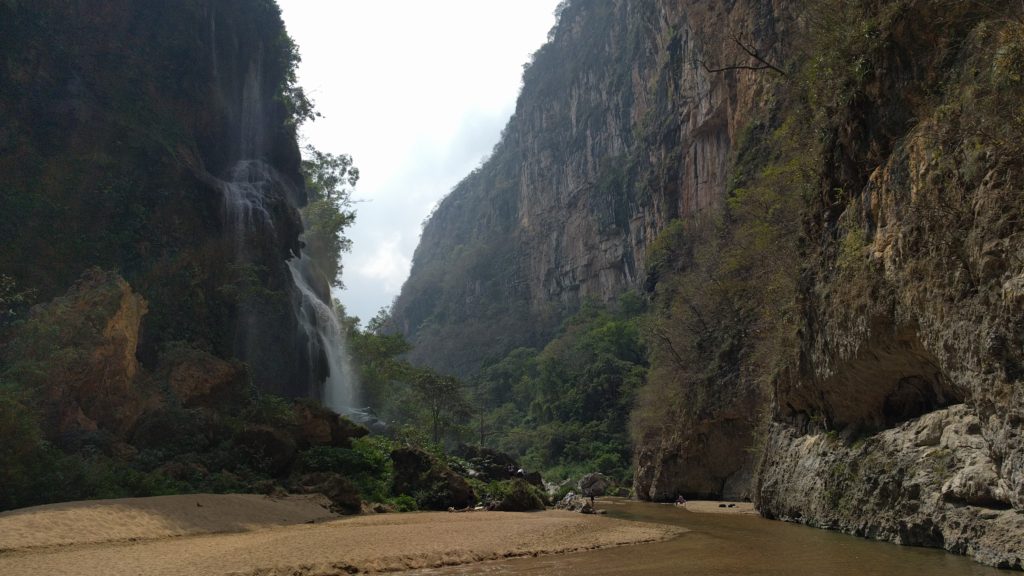 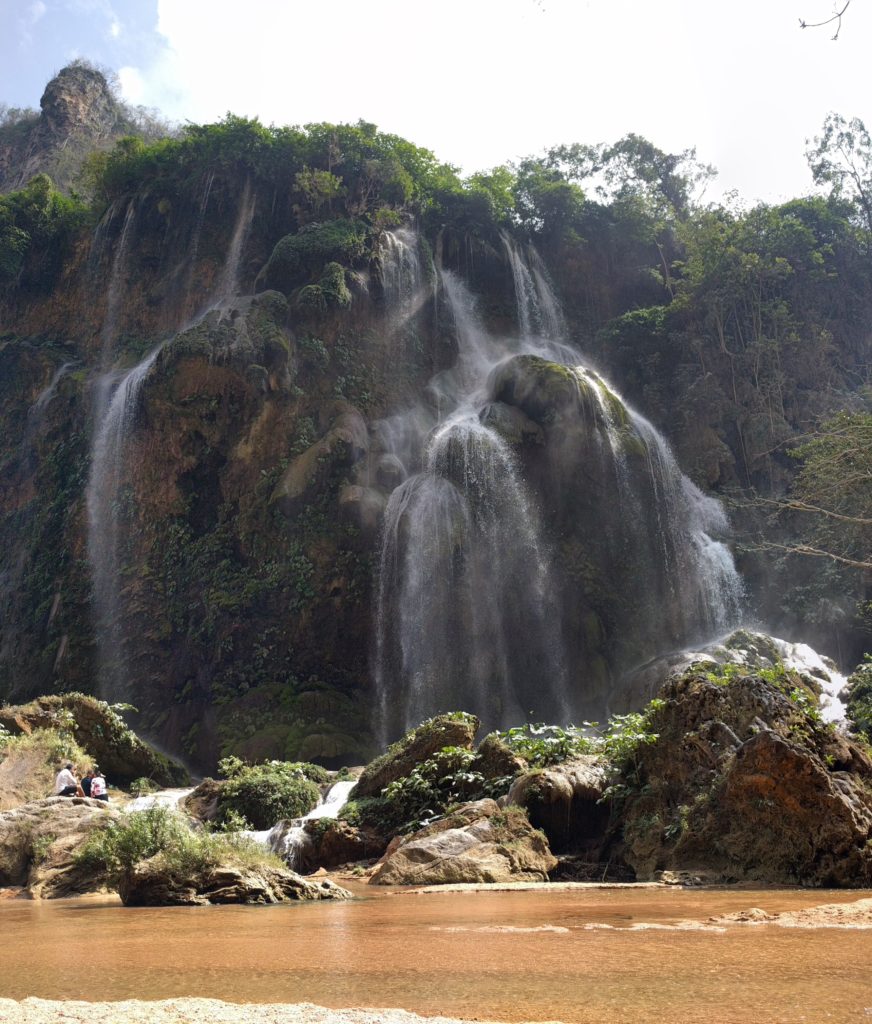 Hopping back into the van giddy from being close to nature again, our hungry bellies managed to navigate us towards the wonderful food haven of Oaxaca City.  After a longer 2 days on the road we were in the high valleys again. 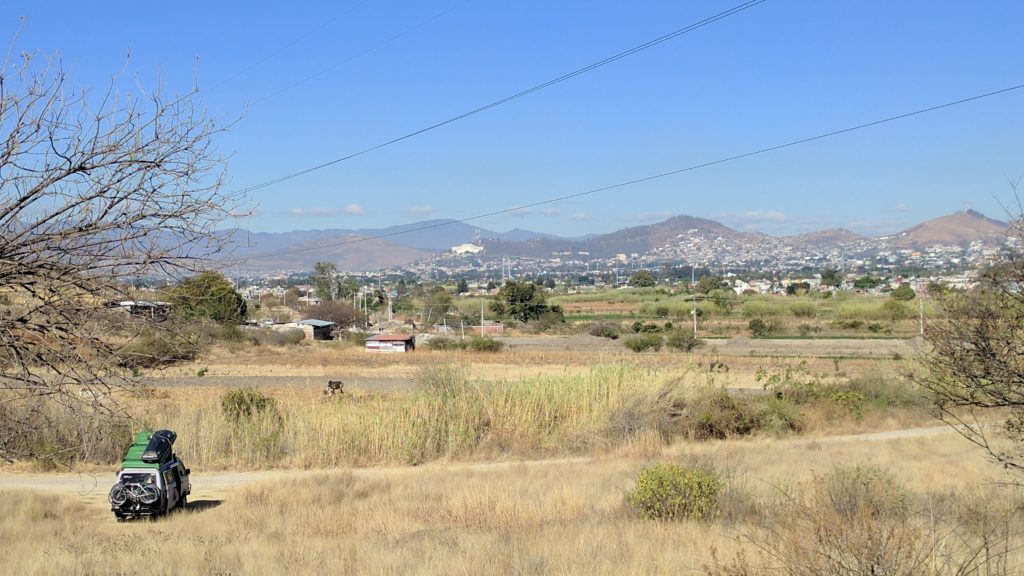 We opted to primitive camp a little longer before making the plunge again into a large city next to some great climbing in the area with no one else around.  Still feeling the effects of the previous days episodes, we gladly enjoyed the peaceful setting and good exercise once again, all while staying very very hydrated 🙂 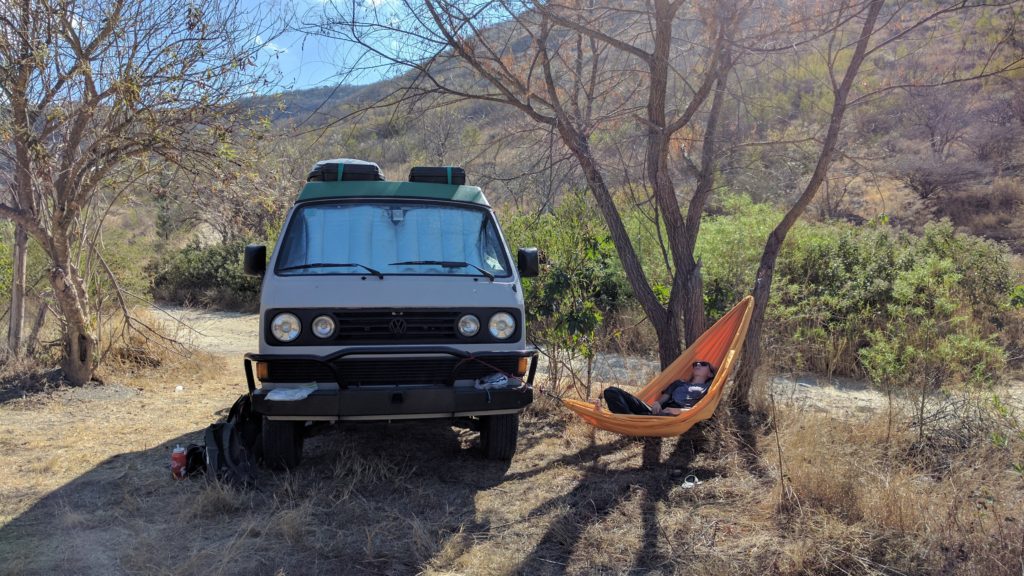 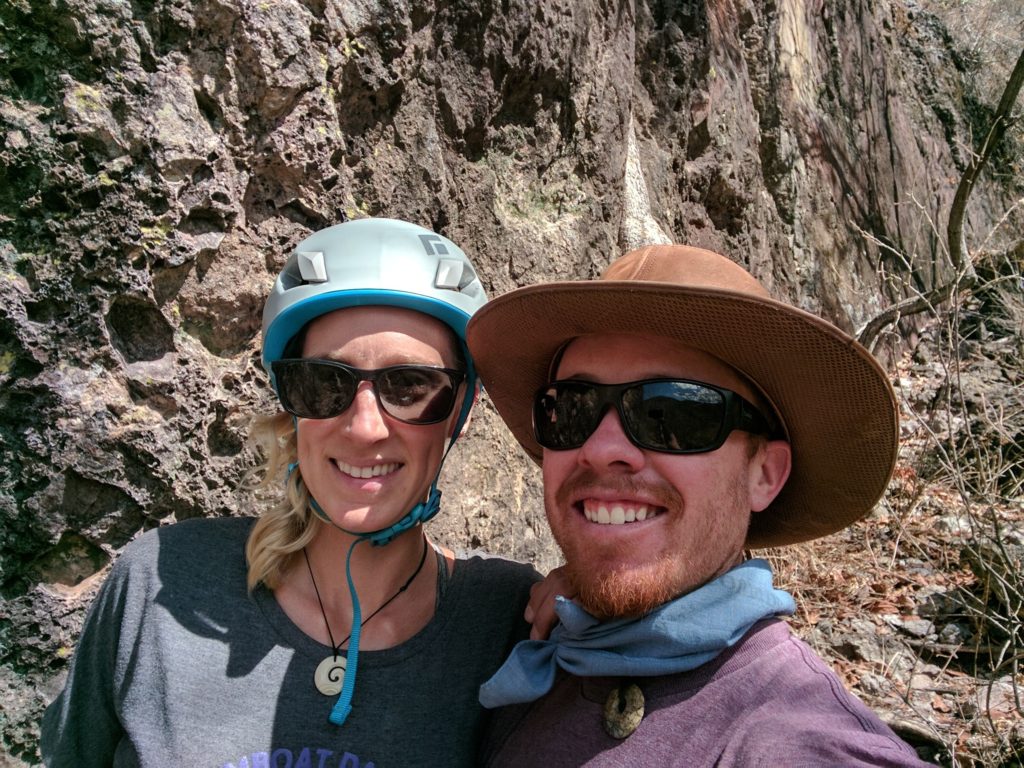 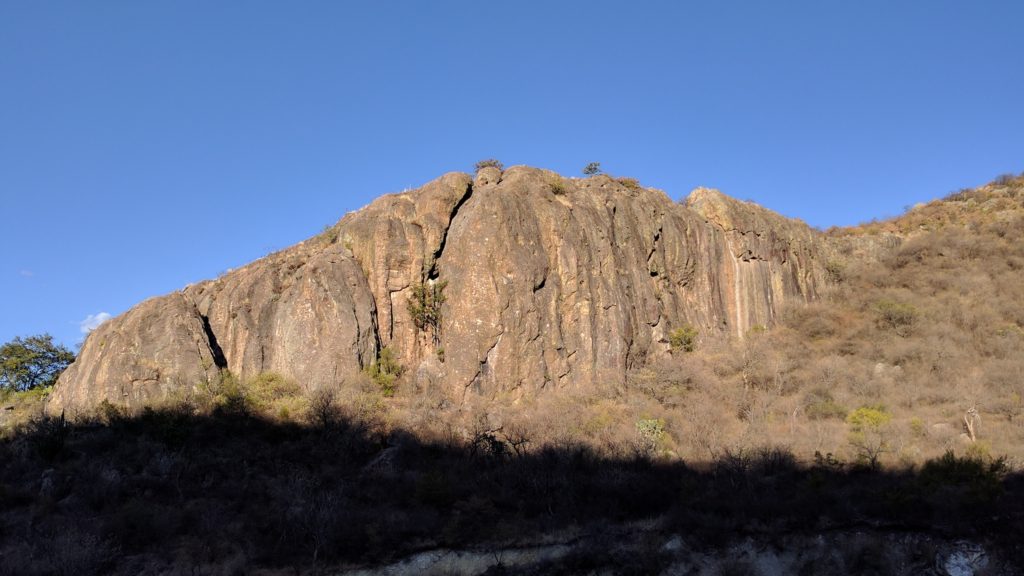 The time came to venture city-ward.  We were quickly reminded why we love the mountains and open spaces.  Heavy traffic and erratic intersections were everywhere, but we did end up finding a public parking lot to camp that had bathrooms and showers which we definitely needed.  Freshly clean and hungry, we set off to discover the famed city.  Our first stop was a filled comedor where we ordered a chicken en poblano that was rich with tasty flavor. 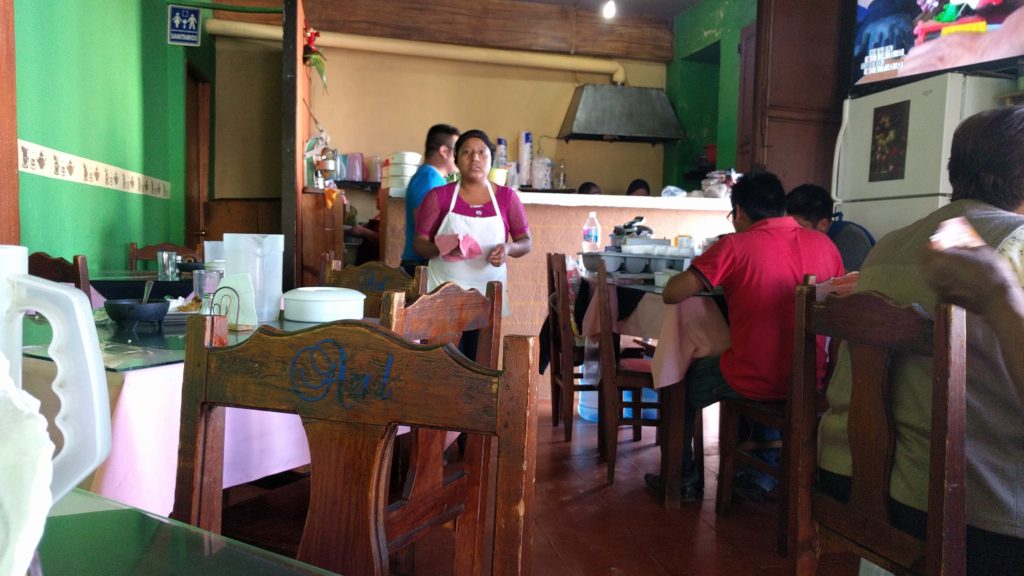 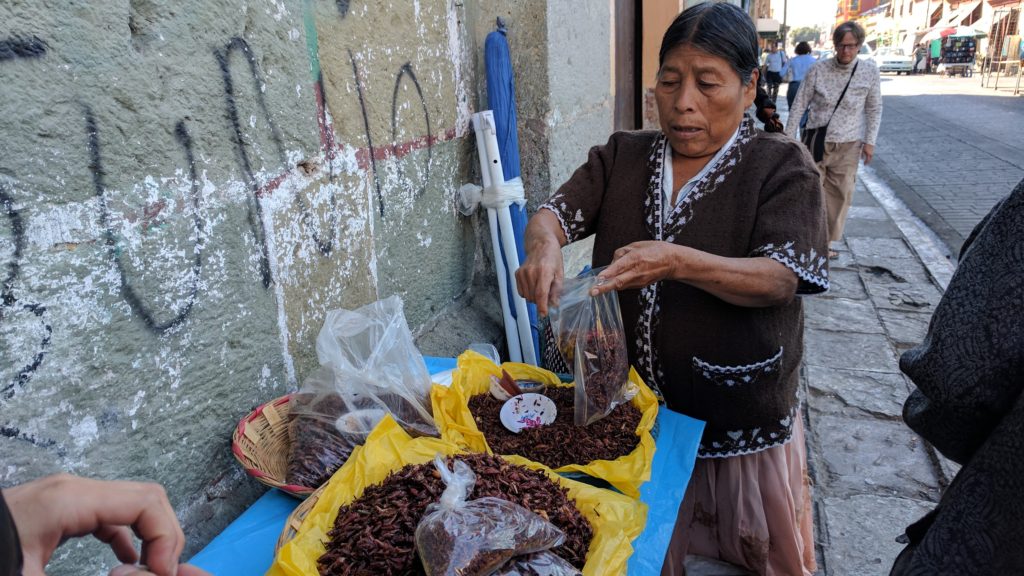 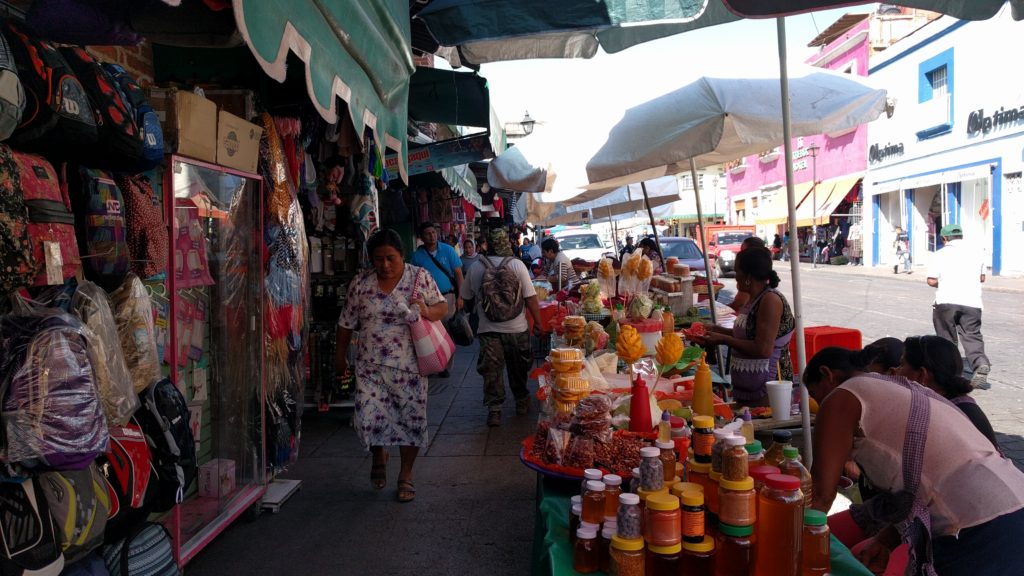 After filling our bellies we went about exploring the city. Oaxaca is well known for all of its peaceful protests of the Mexican Government for the last several decades.  Upon entering the zocalo, we found ourselves seeing protests for many things from teacher salaries to recent hike in gas prices and of course, Americas 45th president. 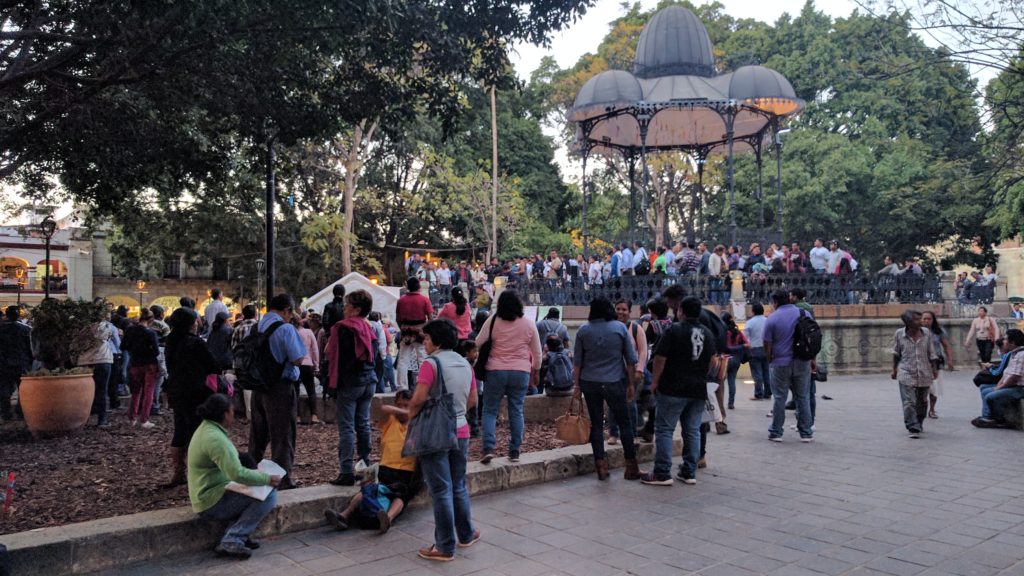 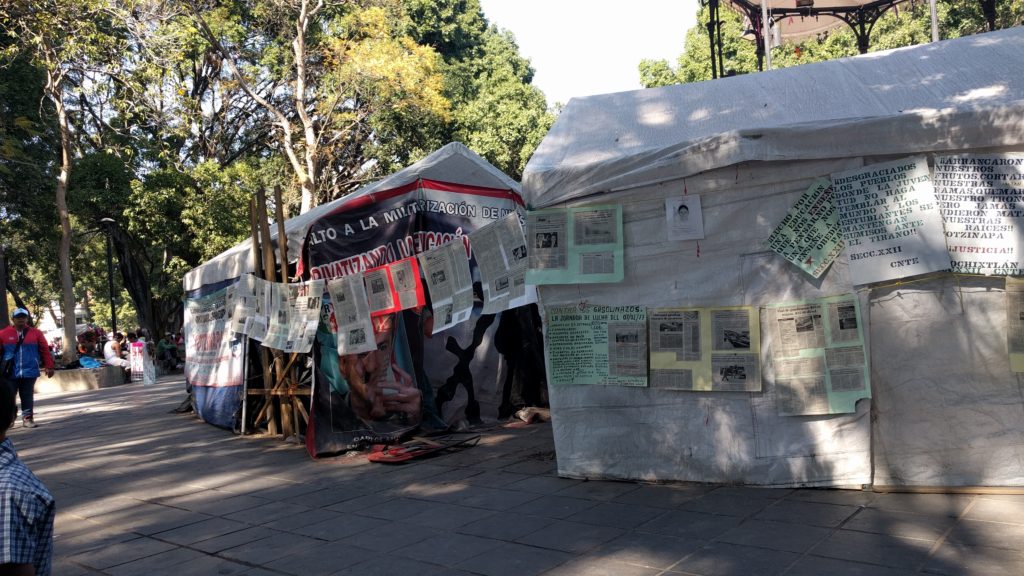 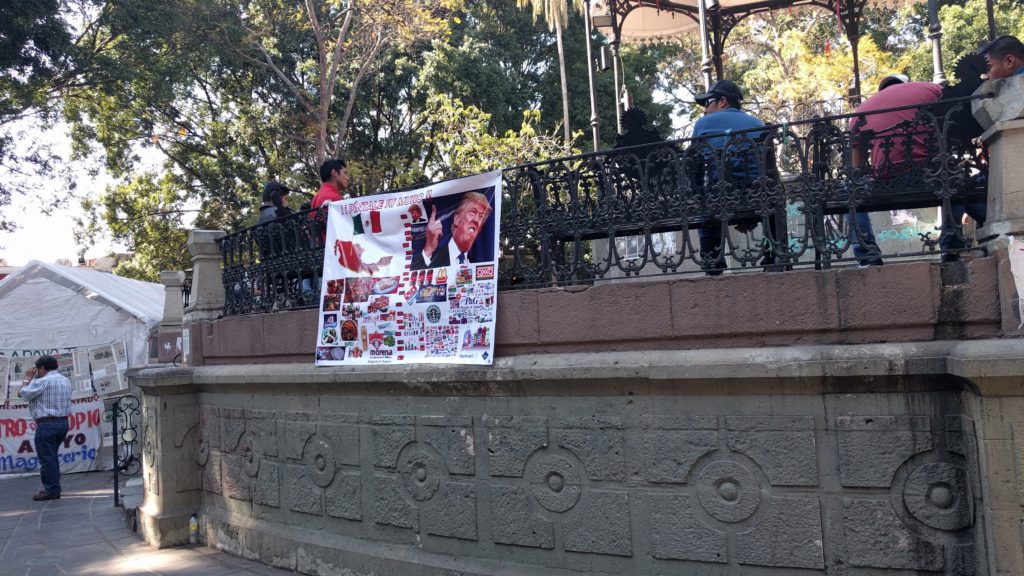 Despite all of the energy in and around some of the areas of protest, there were signs of optimism and gratitude for life in Mexico.  To fully understand the details of what we saw here would take a lifetime living through the struggle that the Mexican Government has bestowed upon its citizens.  We did what we could by respectfully observing at a distance, but did have an opportunity to sign a petition that aims to prevent the full integration of Monsanto into the food industry of Mexico.

From here we continued exploring and stumbled upon the church of Santo Domingo Guzman.  We’ve walked into quite a few churches on our travels, but this church was incredible! Every inch was ornate with statues and flowing sculptures.  This was truly an incredible feat of art and architecture. 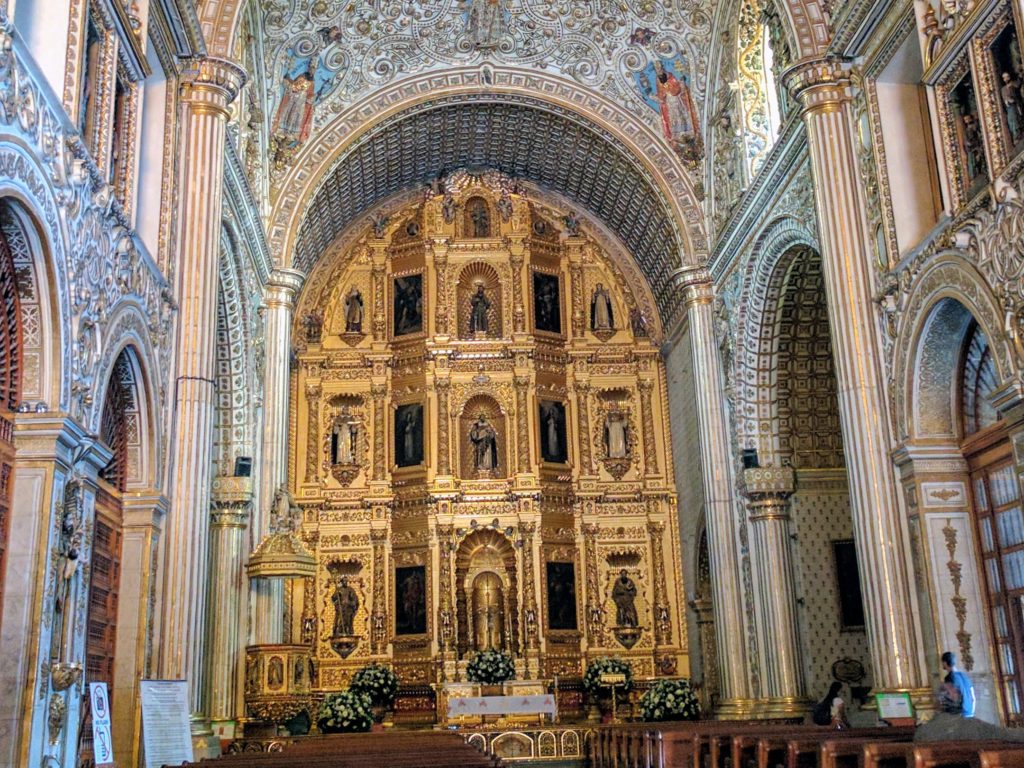 As the afternoon continued, so did our interest in trying more local foods.  Sarah, again with her uncanny abilities of finding the good deals and delicious food, found a gem for the ages.  There is a local family who have been making tamales for 20 years and selling them at a pop-up cart on the same corner every night at 7:30. 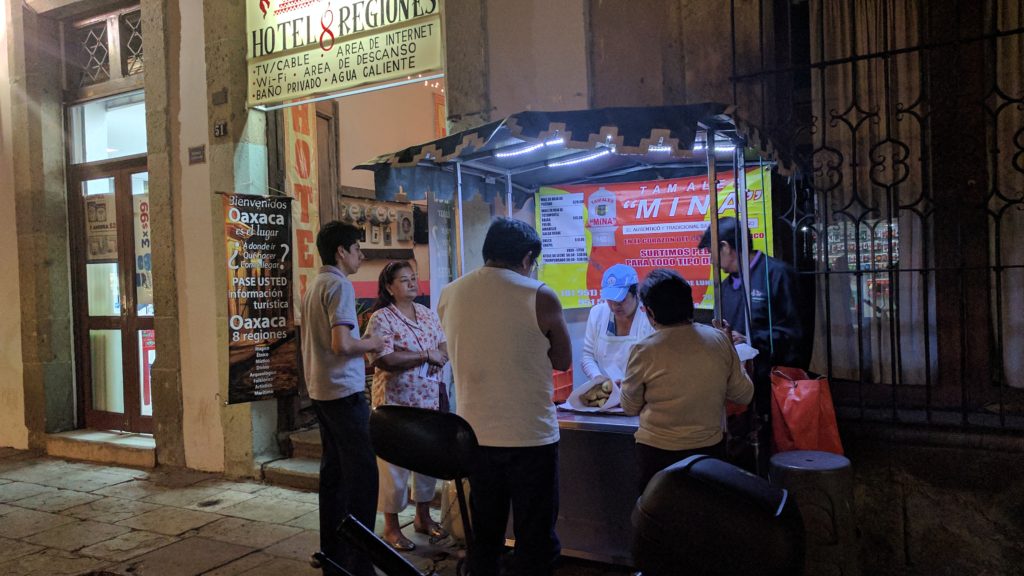 We showed up early because we heard a line forms and they sell out fast. Luckily we were 3rd in line and were astonished to watch the 2 customers in front of us pay over 600 pesos in tamales!  We bought one of each flavor and after we had our tamales in hand, we looked back and realized the line had exponentially grown, so we counted our blessings and mentally prepared our taste buds. 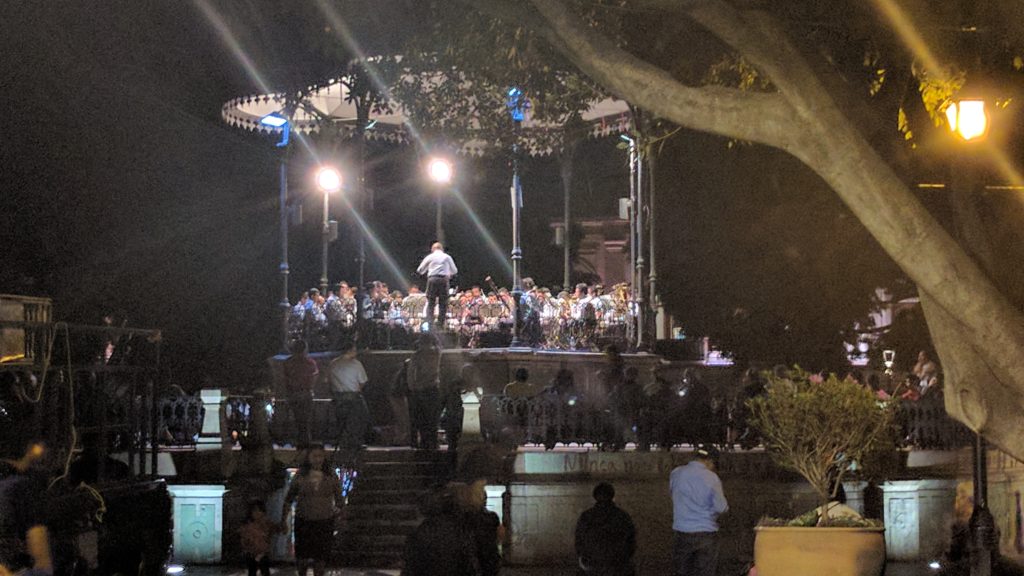 In the same town square where we witnessed protesting earlier in the day, an orchestra had set up for an evening of free music.  We sat near a fountain and proceeded to eat BY FAR the best tamales either of us had ever tasted, all while being serenaded by classics from Mozart, Beethoven and many others unbeknownst to us.  It was a wonderful reminder that despite all of the conflict around the world, humans sure can create love and beauty through music and food.  Mexico, again and again, we love you!

After 2 days in the city, we were ready to head coastal.  Matt’s parents Scott and Deb were due to arrive in Puerto Escondido in a few days for a visit, so we hopped in our trusty German chariot and got ready to descend to the beautiful Pacific Ocean. 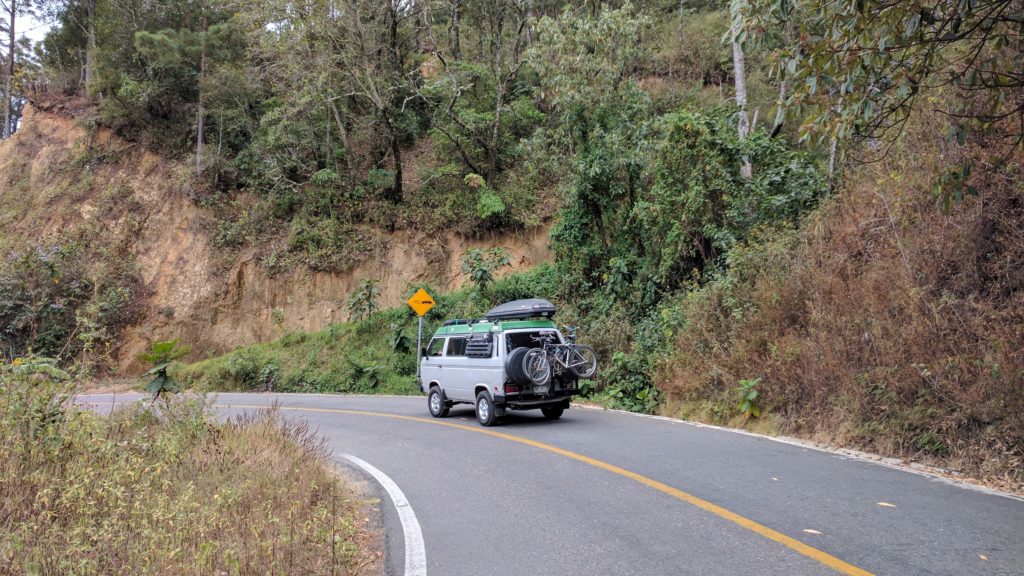 15 thoughts on “Into Oaxaca we go, obstacles be damned….”