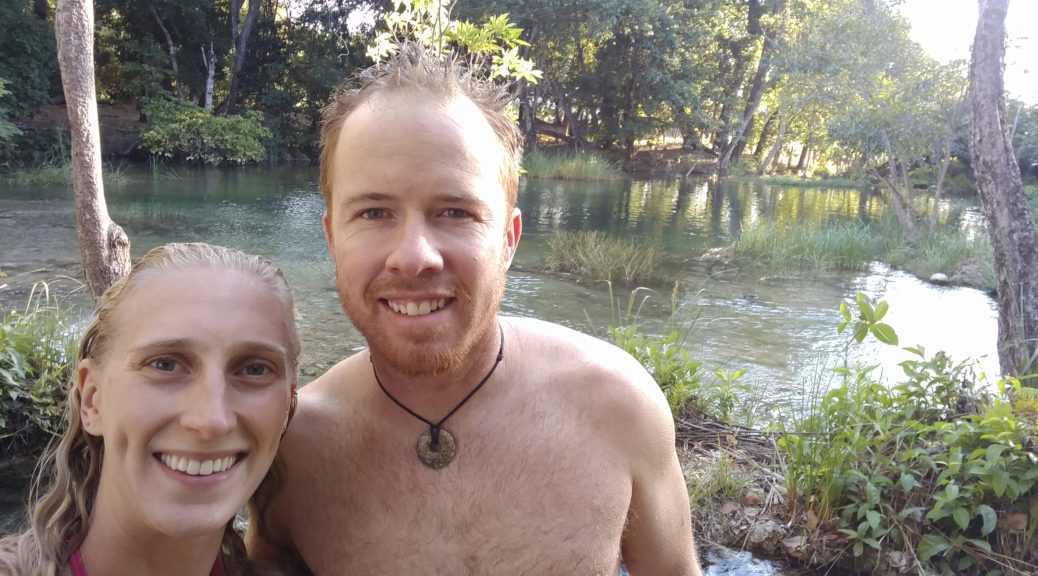 So there we were, cherishing and contemplating our new-found vagabond lifestyle and how we planned to progress. The time in Guatemala allowed us to realize we can shape this trip however we desire, thus giving us the sense of complete freedom. We anticipated this to be the feeling from the start of our grand adventure, but years of systematic structure and planning took a while to shake.  We opted to return to Mexico to visit areas we’d missed on our way down and to renew our visas for Guatemala, Hondurus, El Salvador and Nicaragua which were due to expire in just 3 weeks. It was also a great excuse to have some family visit us on the famed Oaxacan Coast. 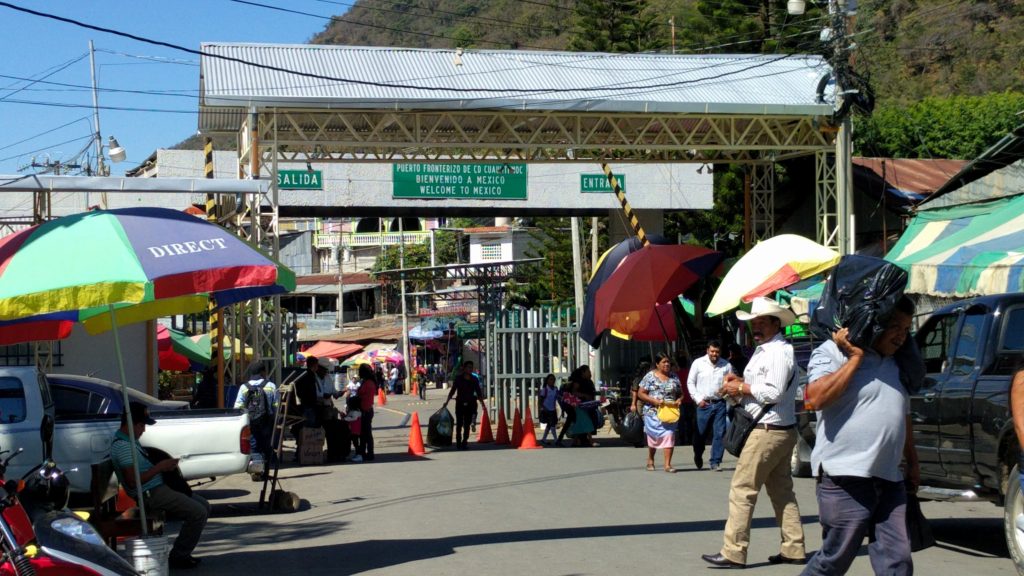 We hit the border with some great ideas for what to see in the states of Chiapas and Oaxaca. Both states are loved by travelers and Mexicans alike. Armed with more border experience than before, we were readyto tackle the border crossing with ease, or so we thought. Unfortunately, we overlooked one important detail. 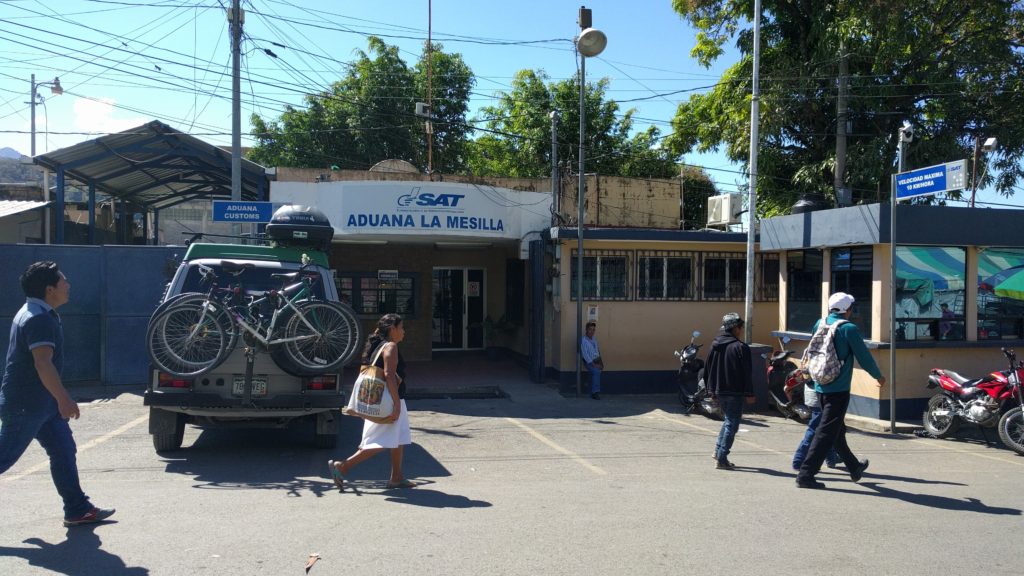 The rules in Guatemala prevent a foreign vehicle from coming back into the country once it leaves for a minimum of 90 days. This presented a huge problem for us, because we did not have intentions to be in Mexico for another 3 months. The immigration officer was quite nice and offered us a temporary exit permit lasting only 15 days. We told the officer we’d be over extending that permit during our time in Mexico and he just gave us a positive smile and said he didn’t know what the computer would say when we try to re-enter again. All we can do now is see what will happen upon our return to Guatemala. Fingers crossed… 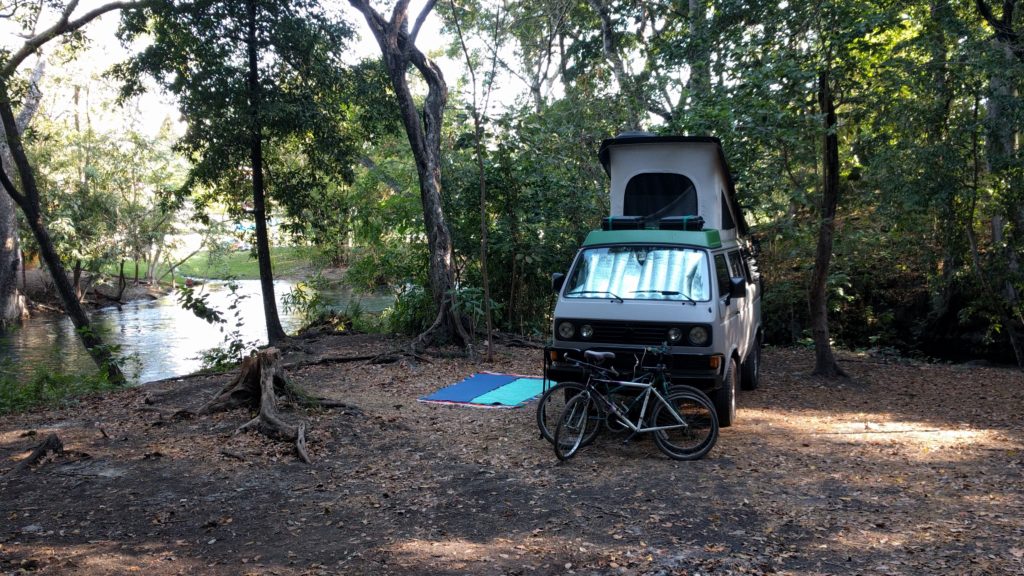 Our first stop back in Mexico was Lagos de Colon, which turned out to be one of the best camping spots yet! With over 40 fresh water pools, countless streams, fresh water springs, Mayan ruins, huge trees everywhere for shade, and a sweet rope swing, we were in vanlife heaven!  The lakes are located just across the Guatemalan boarder on the valley floor and after the long journey through the rugged Guatemalan mountains, we were able to really appreciate their grandeur from afar. 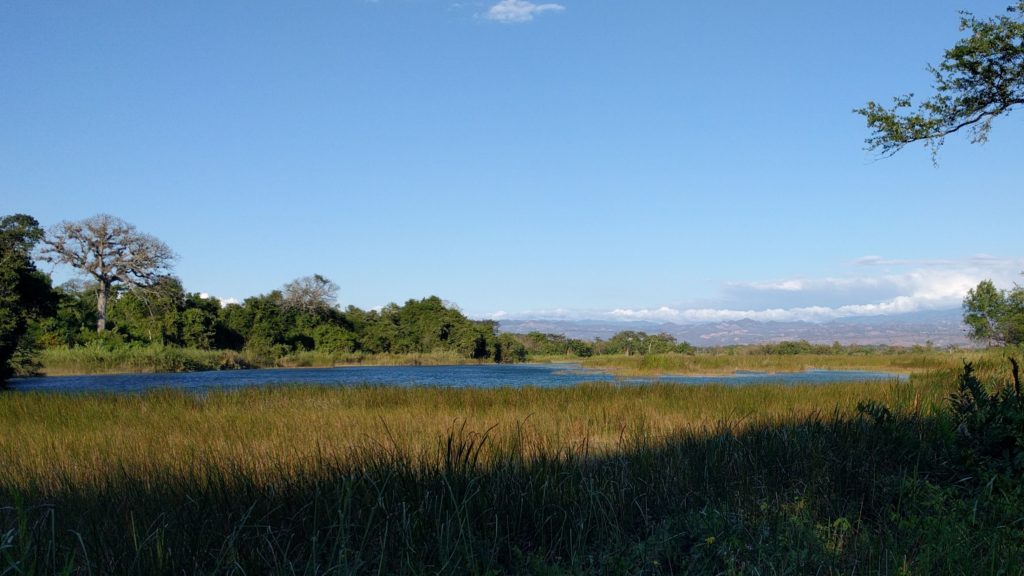 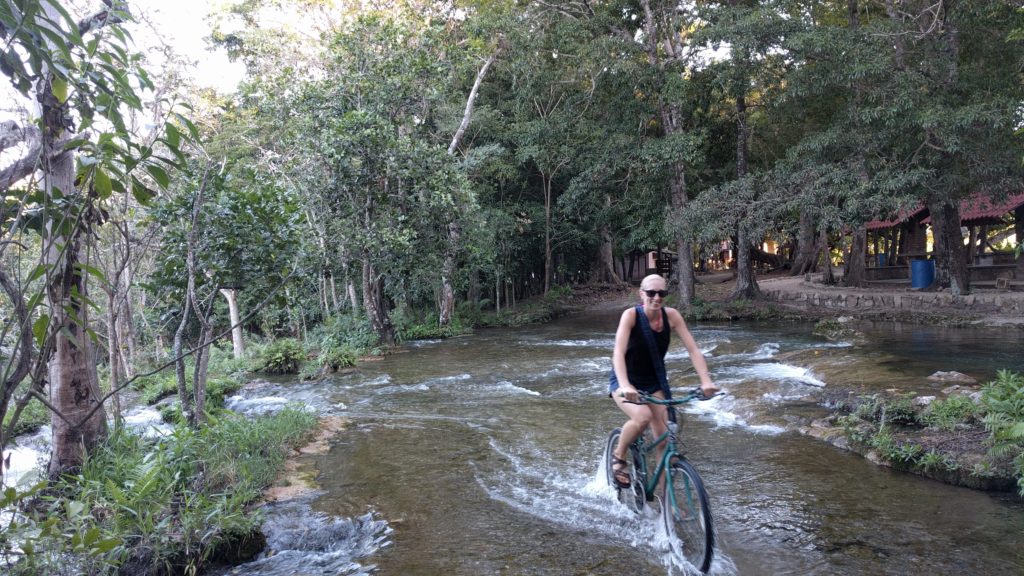 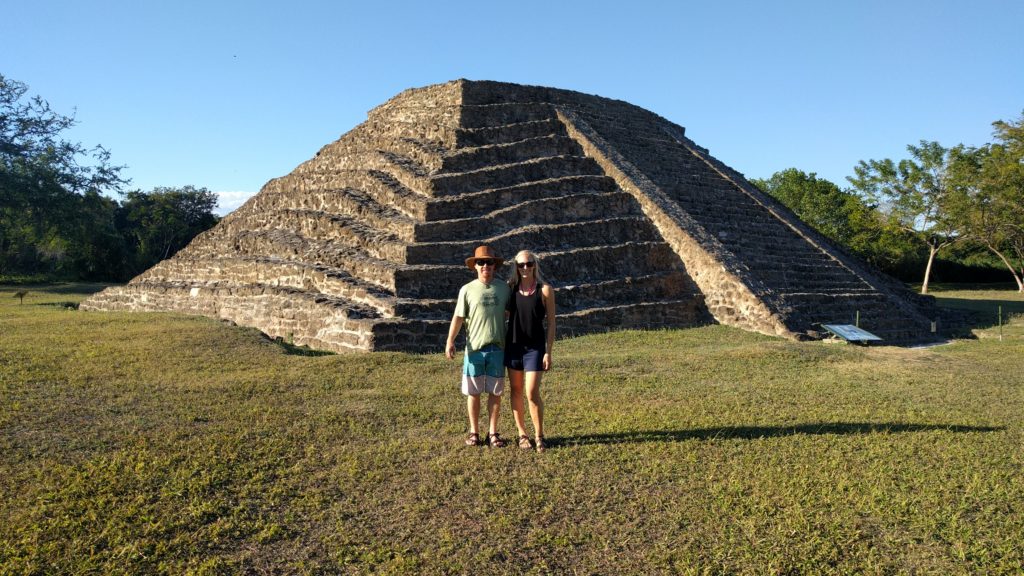 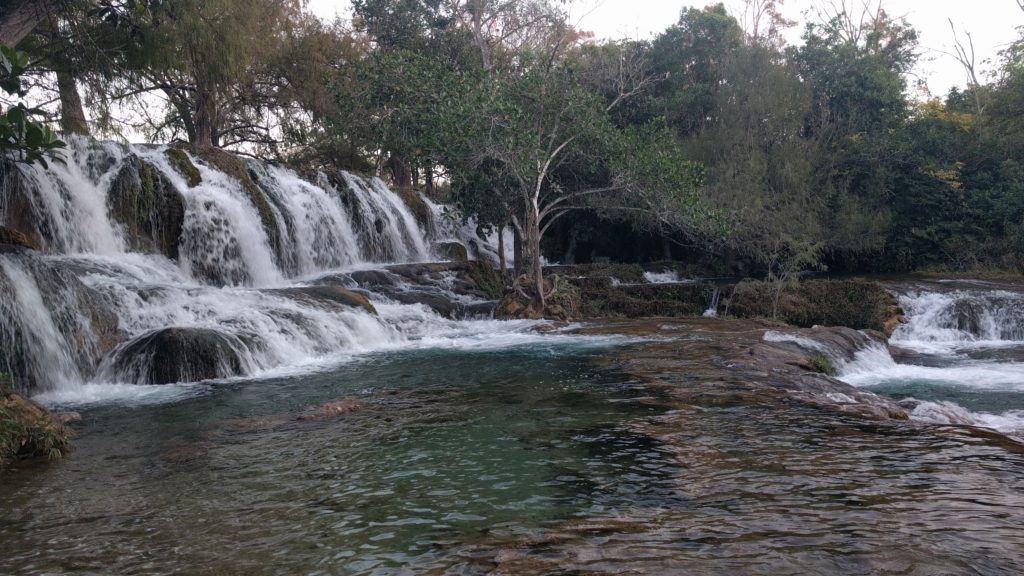 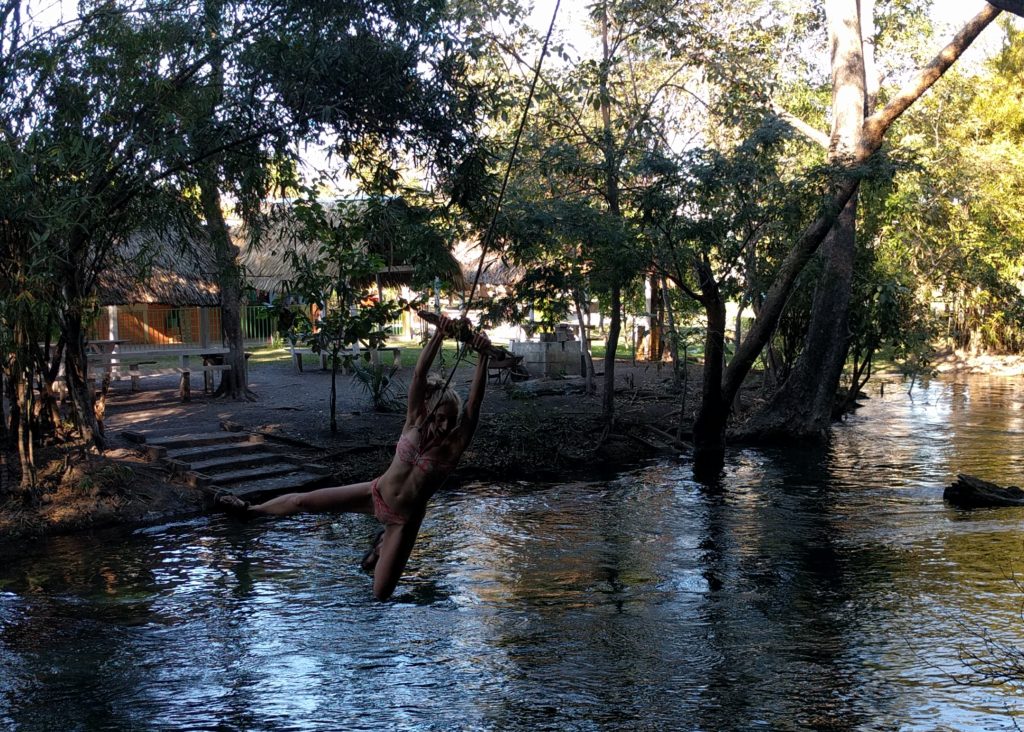 After a refreshing few days, we headed for San Cristobal de Las Casas, an eclectic and very international city sitting at a surprising 7200 ft. On the way we stopped in a cute little city named Comitan de Dominiguez. During our quick overnight here, we discovered the most elaborate cemetery we have every seen. 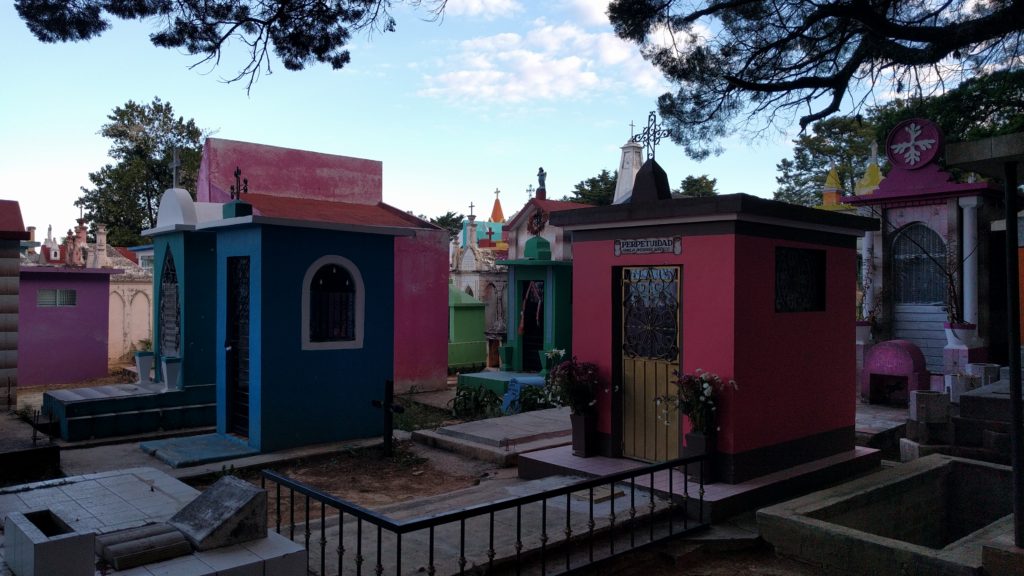 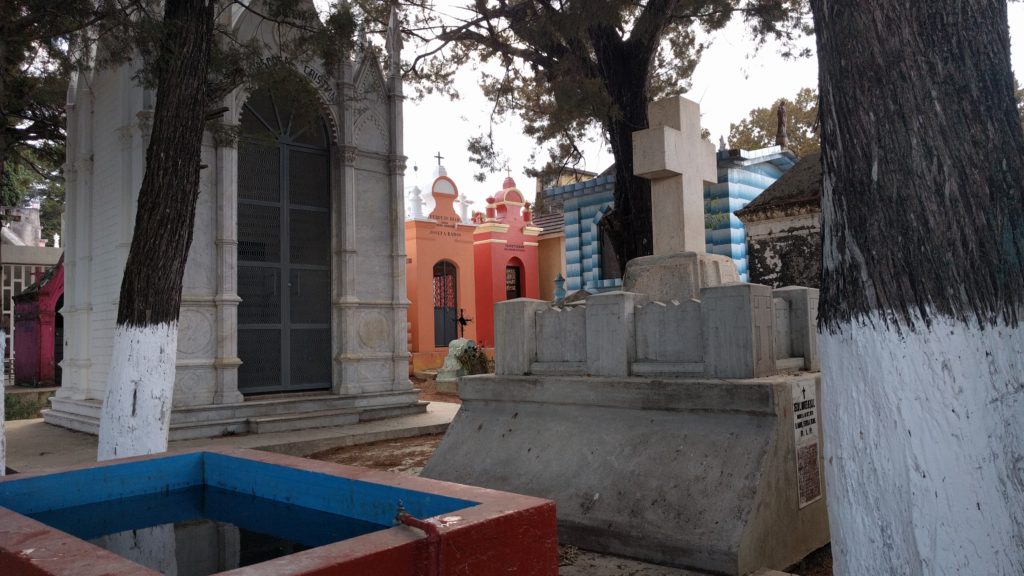 Families and loved ones support those who have died on there next spiritual journey by providing them a safe place to rest and also bring offerings of music, food and drink during a cetain time of the year.  The celebration is known as Day of the Dead and is celebrated from Oct 31-Nov 2. We thoroughly enjoyed walking through the cemetary exploring the unique colors, shapes, and sizes of the family alters and graves. 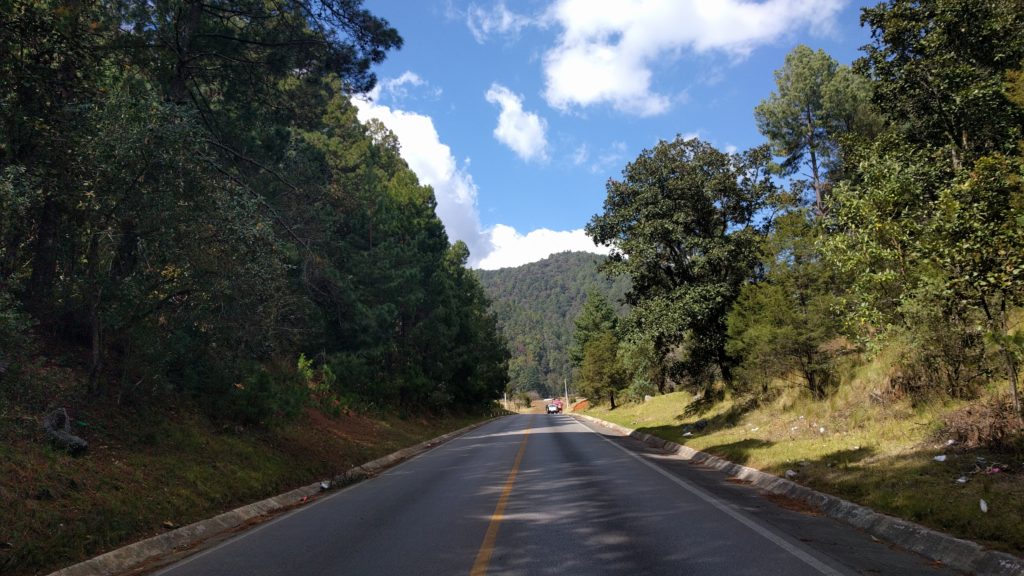 Continuing towards San Cristobal, we sat back and enjoyed the views. The drive from the lakes to the city left us reminiscent of our Rocky Mountain home as we weaved through pine forests and great mountain valleys. 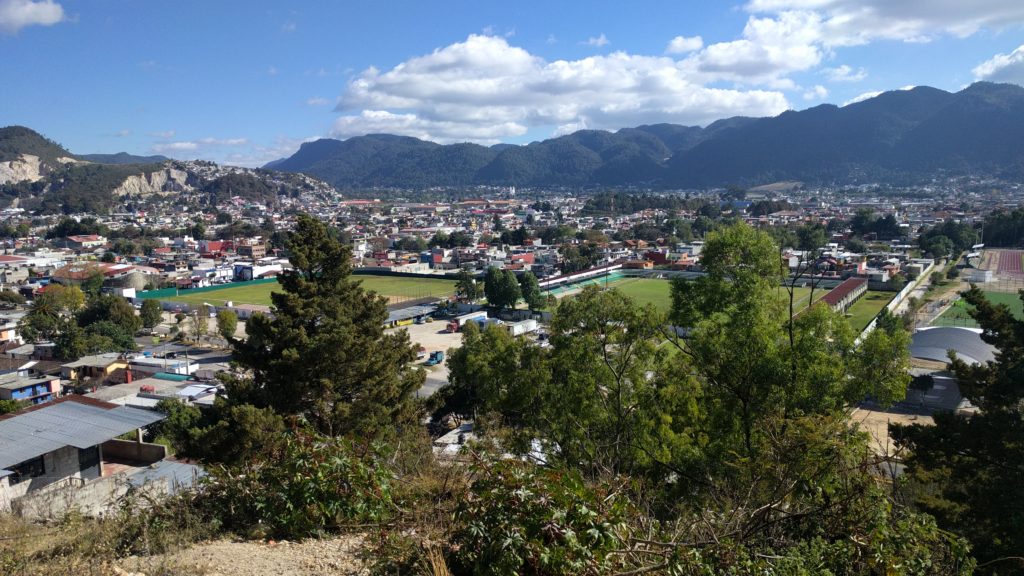 The day we arrived,  we happily set out to explore the modern and internationally influenced city full of Spanish colonialism and a young spunky vibe. 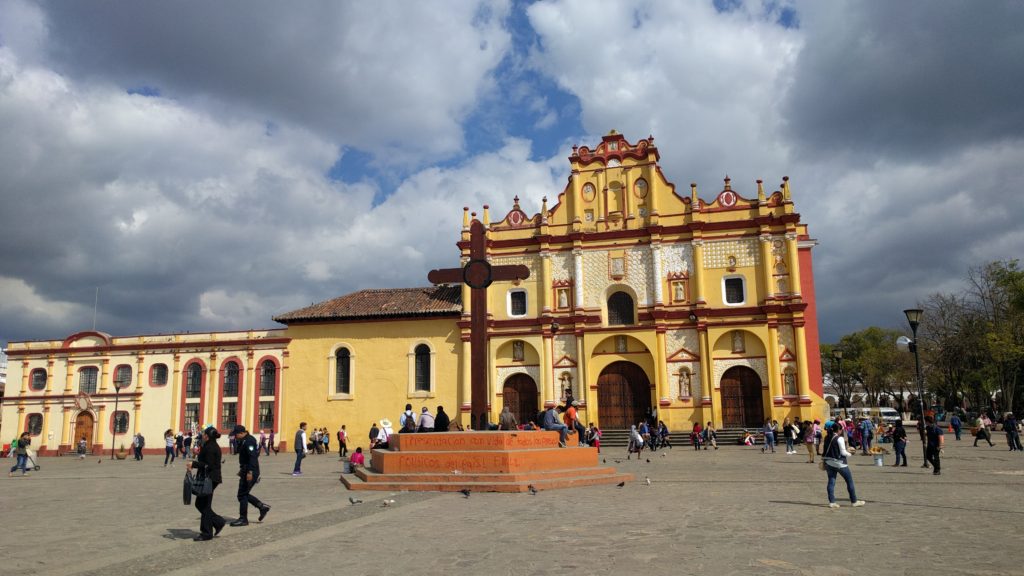 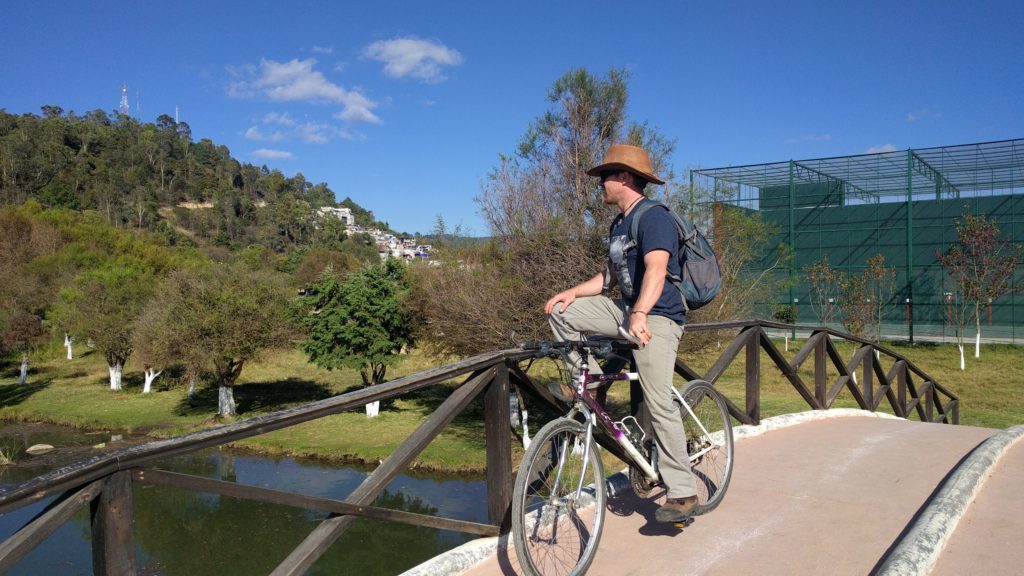 There is a heavy South American and European influence, especially Argentinian on the restaurants and bars in San Cristobal, with live street-side music and vendors with delicious food and drinks throughout the bustling downtown area. 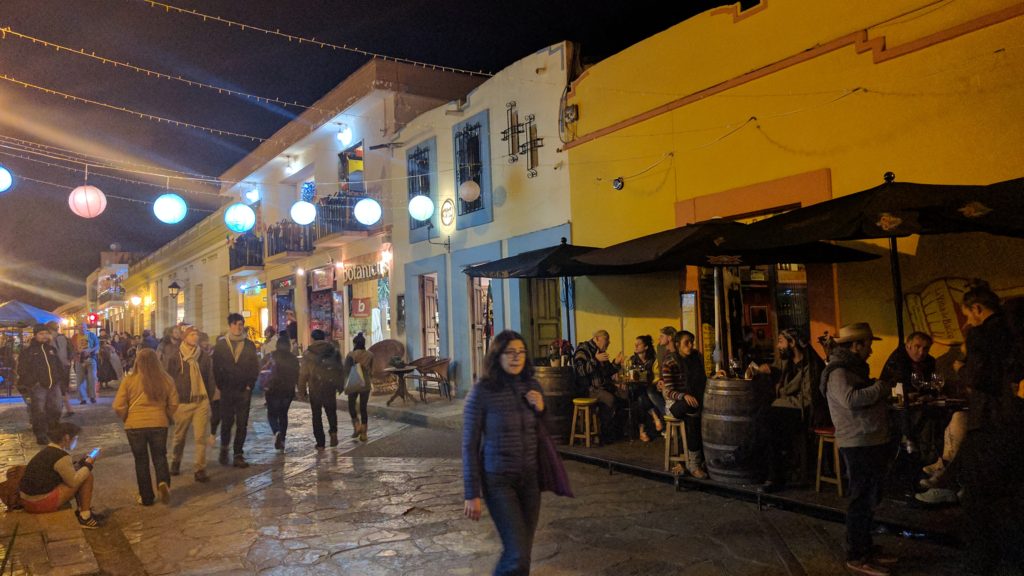 Art adorned many of the walls throughout the streets and alleyways, reminding us of Mexico’s diverse culture. To top it all off, the weather was perfect! Around 70 in the day time and 40s at night, we felt right at home in San Cristobal. 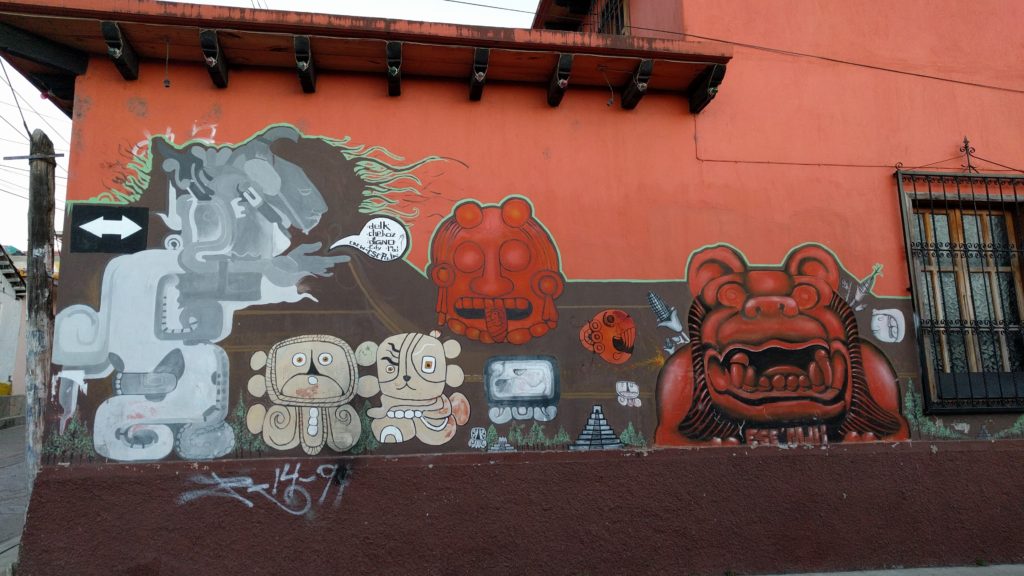 After a few nights camping in the city streets, we decided to seek out a climbing spot Sarah had discovered online. The small state park of Arcotete had limestone cliffs along a river with caves and camping which locals loved for picnicking and ziplining. After meeting a couple of climbers at the cliff close to sunset, we decided to stay the night and climb the next day. Since it was Sunday night, we had the place to ourselves which was a peaceful and a welcom change of pace from the streets of San Cristobal. The next day, we woke up refreshed and quickly wore ourselves out climbing for the first time in about a month. 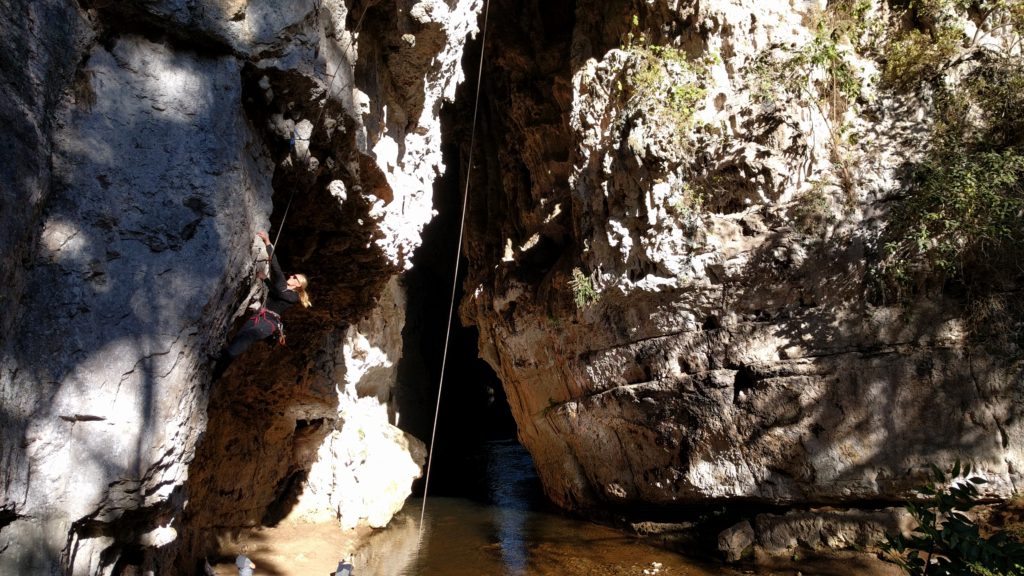 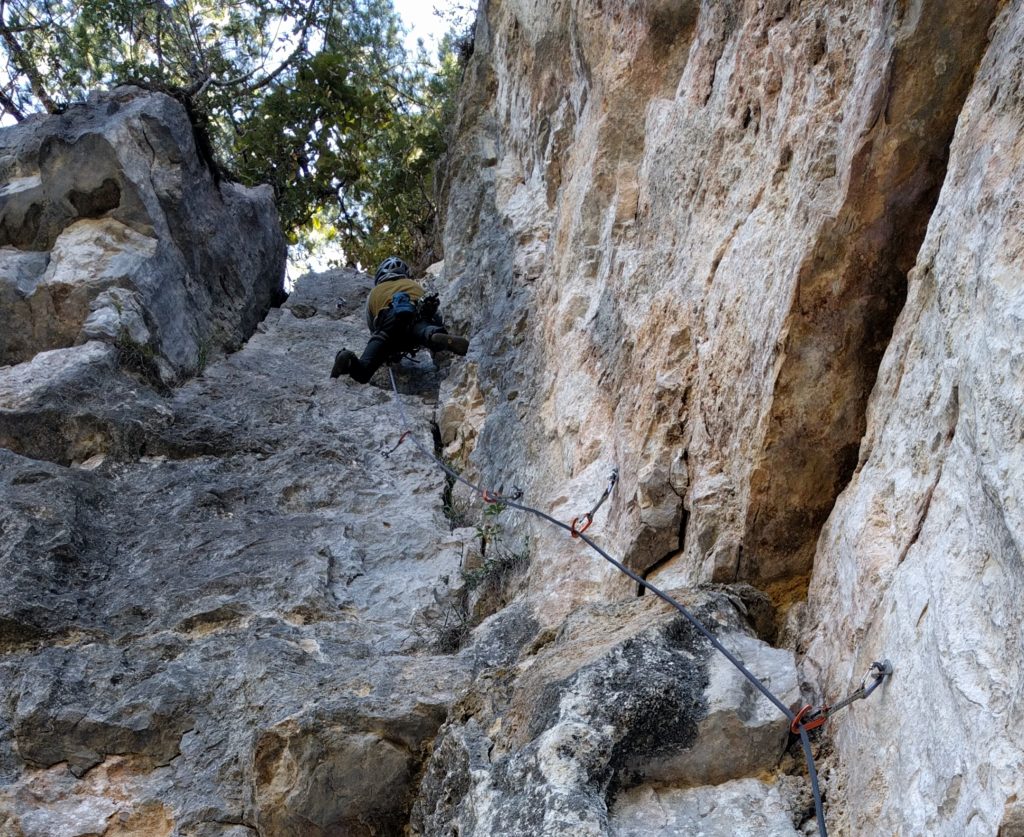 The following day, we visited the neighboring town of Chamula, which we’d heard is where a strange religion is practiced. Upon arrival, what seemed to be a normal Catholic church from the outside turned out to be far from it. We entered the church to smells of candles and pine, with the walls bordered by alters of saints surrounding a pew-less space completely covered in pine needles. There is no photography inside to allow respectful watching, listening and experiencing of the unusual rituals. 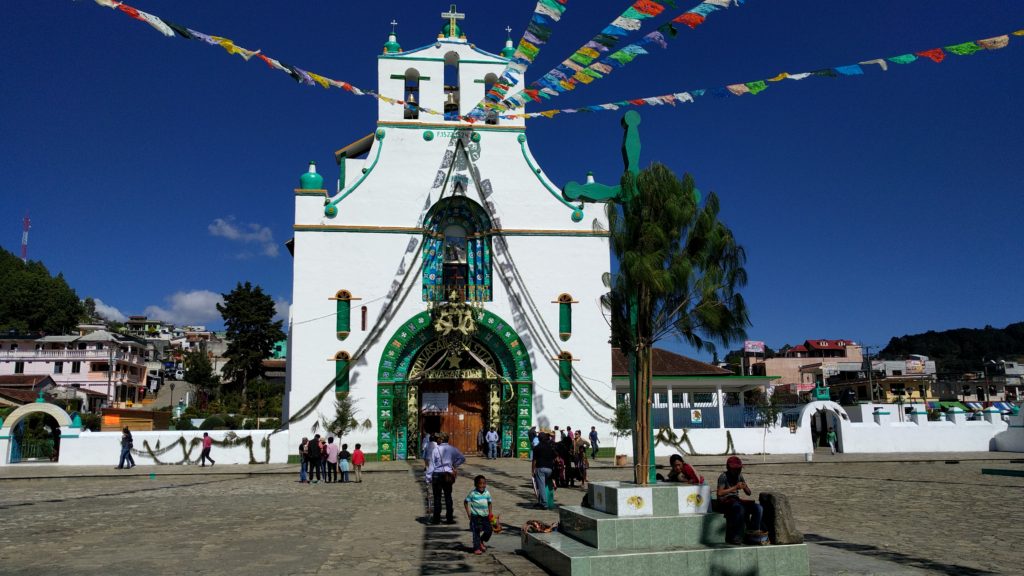 Families entered the church, cleared a space amongst the pine needles and placed 4 or 5 lines of candles on the tile. Gently, and slowly the candles melted to the ground while the matriarch chanted and offered a sacrifice of eggs or a live chicken. One family gently cracked the eggs and then blessed their teenage son. Meanwhile at a different family alter, a chicken was sacrificed by silent suffocation while blessing their sleeping infant daughter. After the sacrifice, both families drank the sacred liquid of coca-cola in a communion like fashion. We later found out wine was once used as the sacred liquid, but in modern times with coca-cola so prevelant across Latin America, and cheaper than water, we understood why they considered it sacred.  Though it was probably the most bizarre event we have seen thus far, we were fascinated by how the Mayan Tzotzil people worship in the modern era where Catholicism appears to reign supreme. 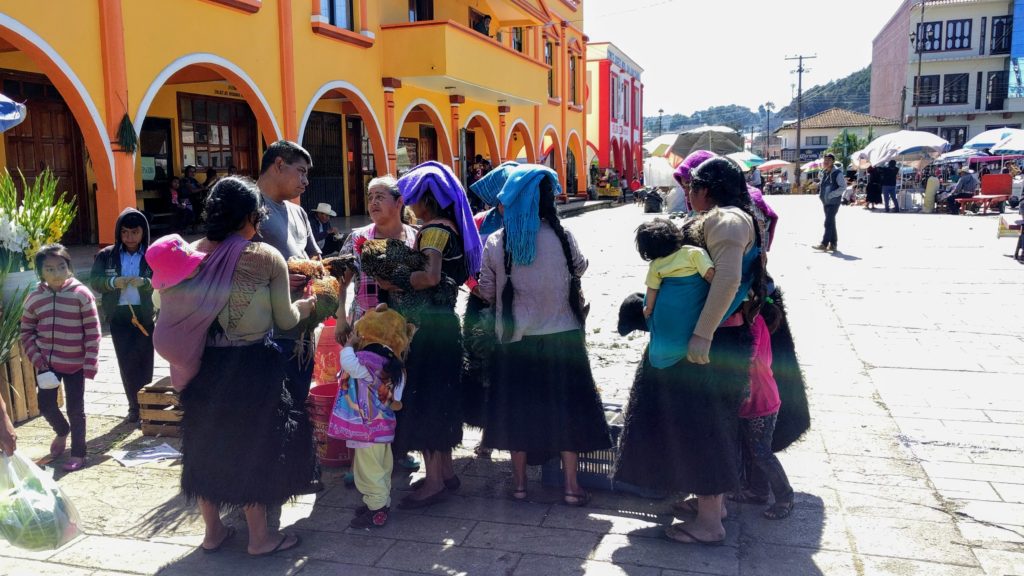 Before leaving San Cristobal, we decided to visit a German mechanic to help us sort out a squeak coming from our rear passenger wheel. Nothing major was discovered which was great! In the end, the brakes were properly cleaned and inspected, our exhaust mount and small hole were welded shut and a minor hole in our CV boot was repaired. Upon getting the bill, we were shocked to discover that his hourly rate was $120 pesos/hr ($6 dollars/hour)! 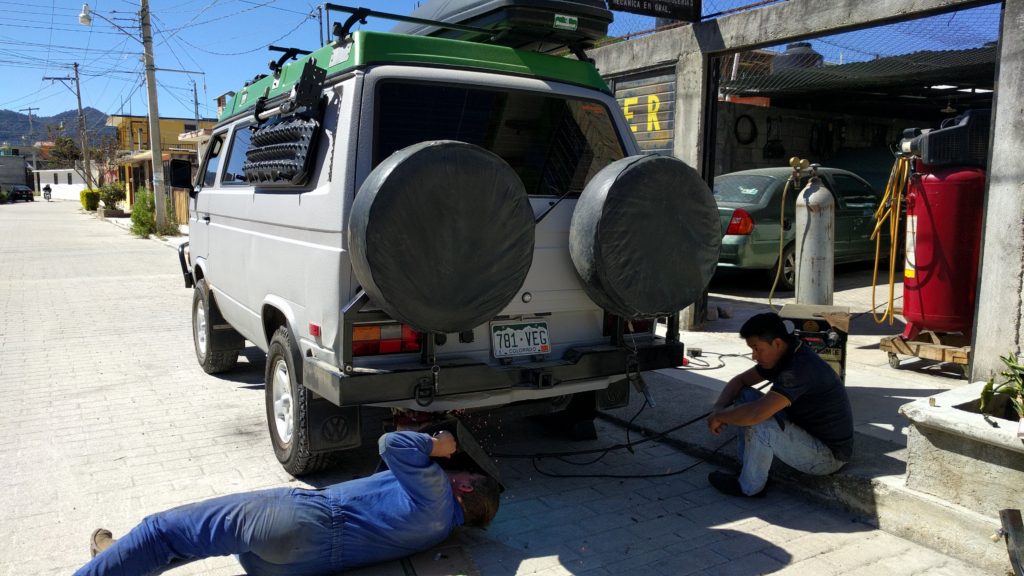 After great food, cool fresh air, and fun climbing, we were excited to continue west towards the big city of Tuxla/Gutierrez where we planned to experience more of what Chiapas has to offer… 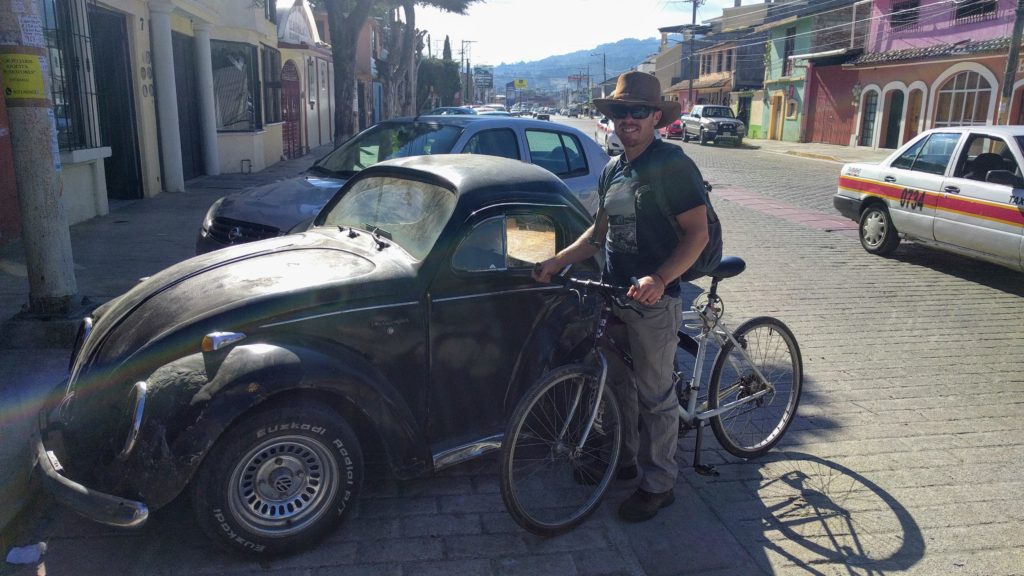 6 thoughts on “Chiapas: Mexico Round 2!”