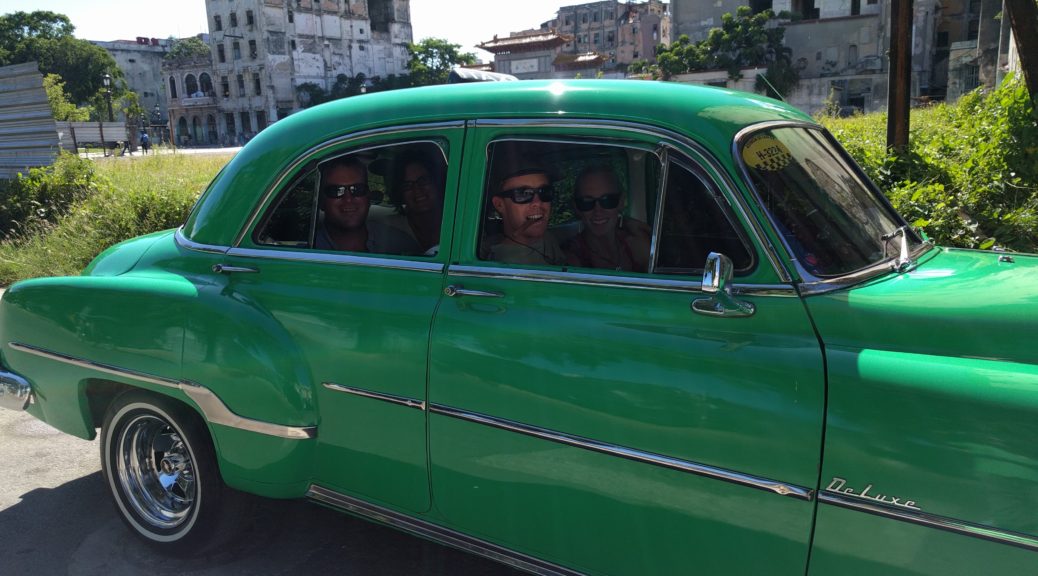 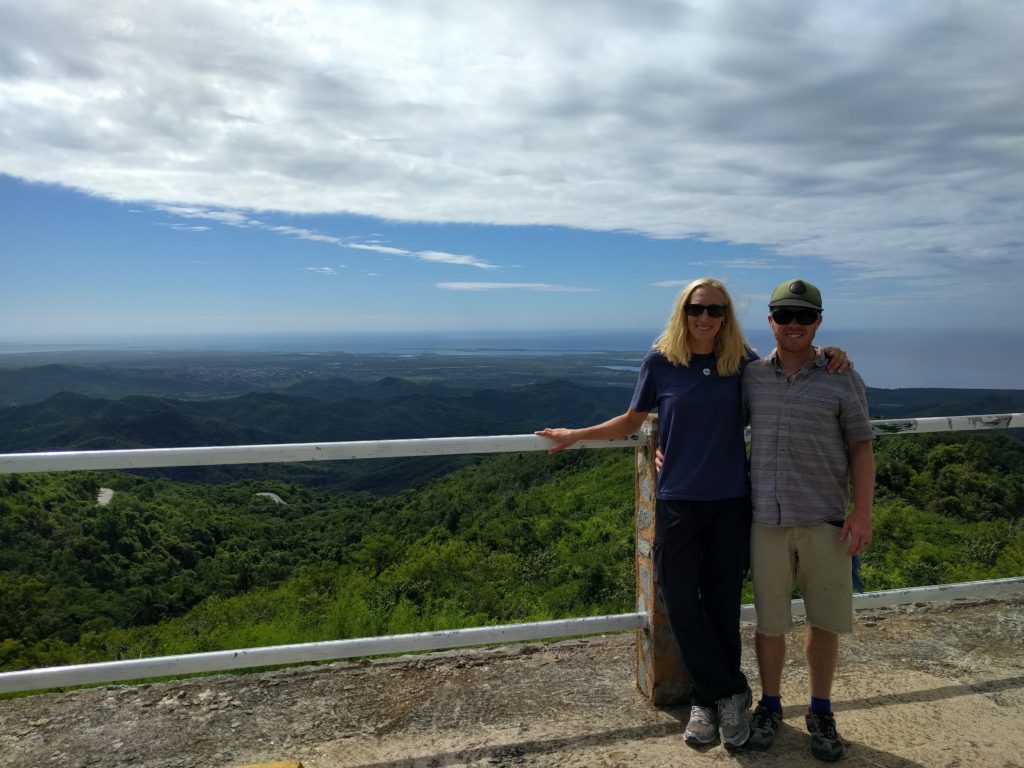 After leaving the beautiful city of Trinidad, we made our way up to the mountains behind the city into Parque Natural Topes de Collantes.  We went on an amazing hike that led us into a really cool slot canyon/cave made of limestone with great pools for swimming and even some climbing around.  This was definitely one of the unexpected highlights of the trip. 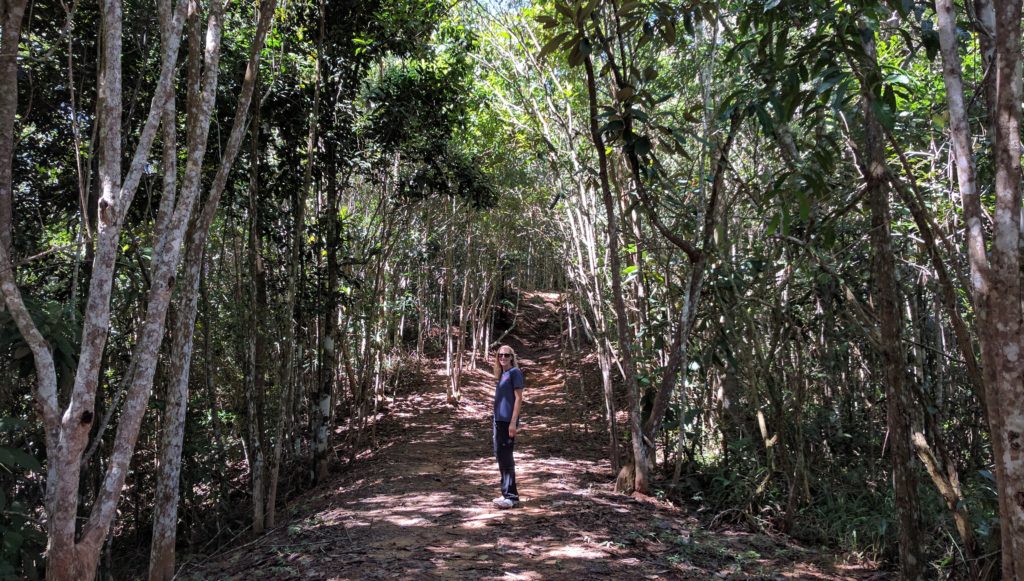 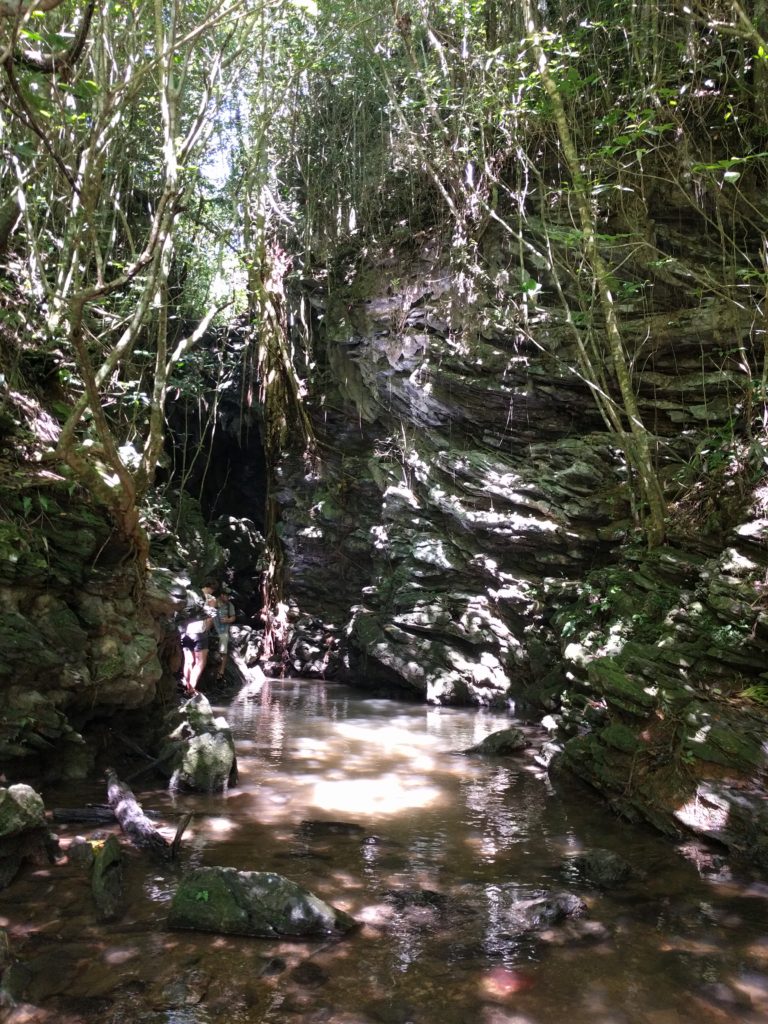 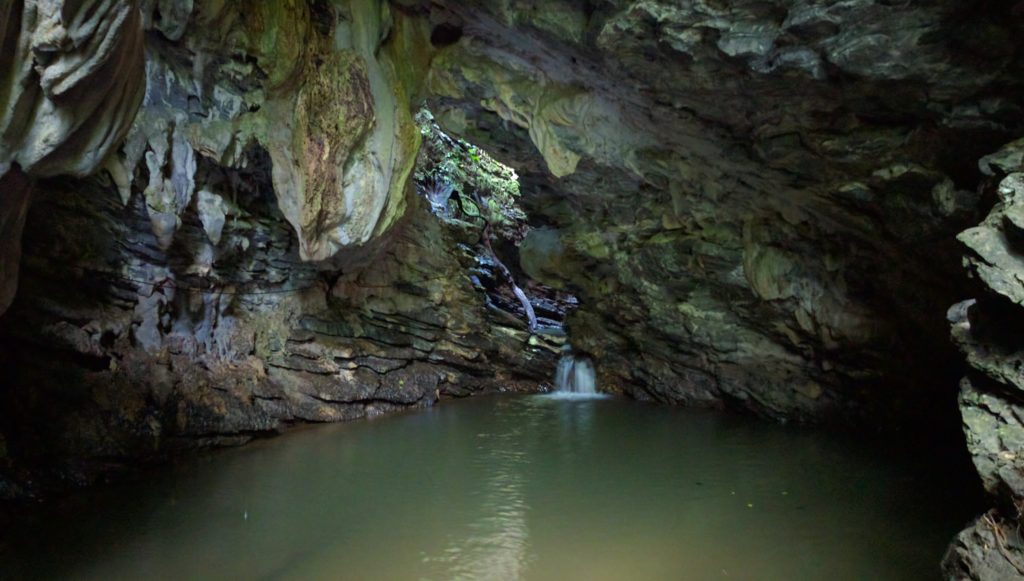 Our next stop was the city of Cienfuegos. The drive through the mountains was just stunning to get there. 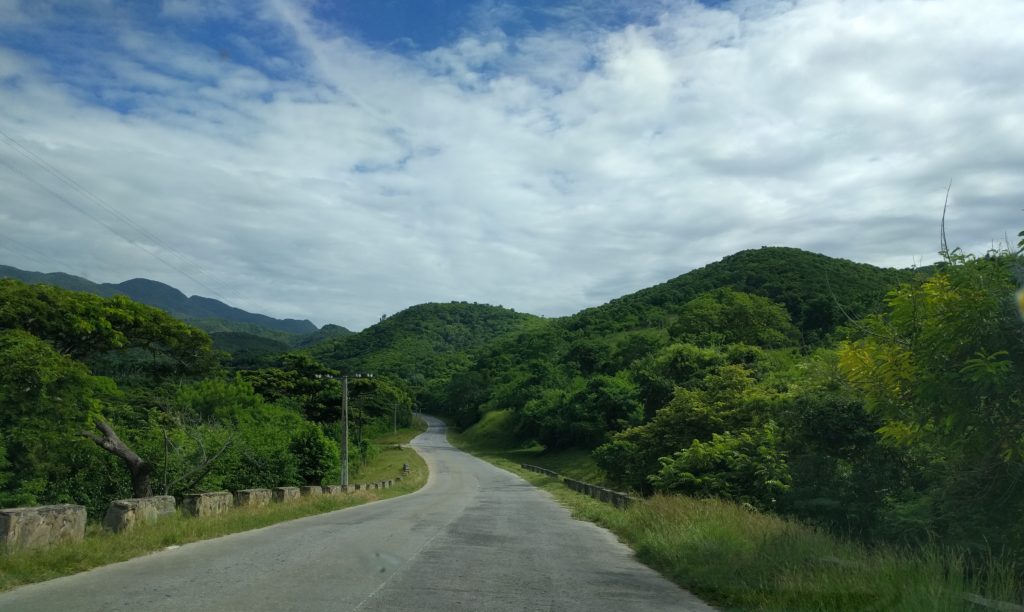 Cienfuegos is a brilliantly beautiful city with a wonderful coastline. We stopped for dinner and it turned out to be one of the best yet on the trip. Until now, we had been less than impressed with the cuisine that restaurants had to offer, but Cienfuegos changed that! We discussed how we needed more time to really see and experience the country, but we made the most of the beautiful evening and sunset with the view from our balcony seats outside. 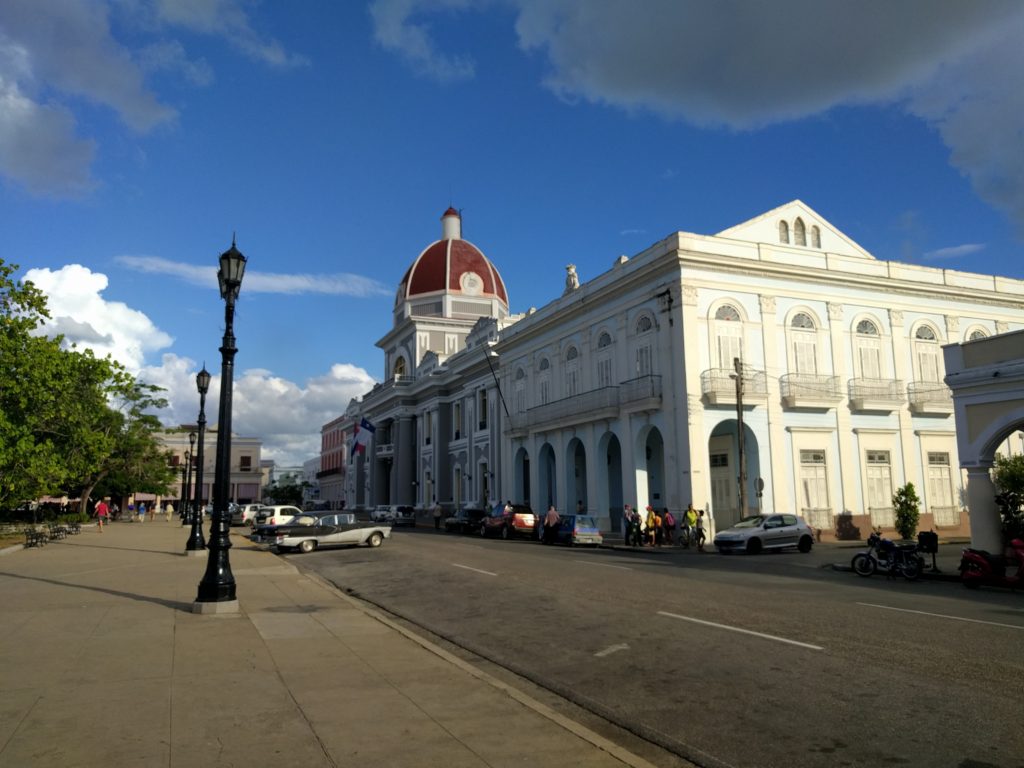 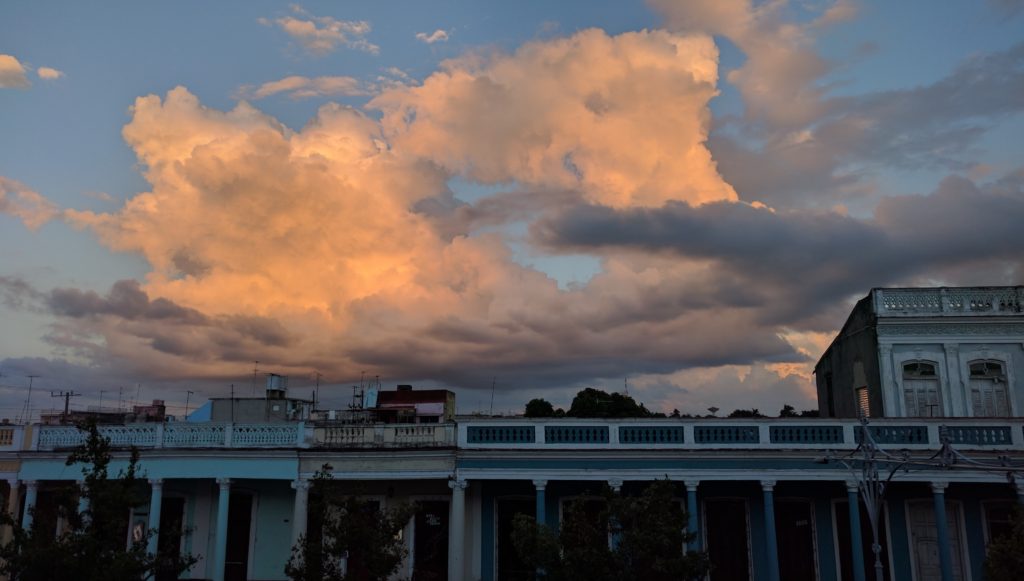 As we departed Cienfuegos that evening, we had our sites set on Playa Giron and a diving adventure.  Matt and Sarah had never scuba dived before, so the excitement level was high.  Cole is very experienced and had researched a popular area for diving along the southern coast. It was very affordable for first timers or experienced alike.  With a small crash course and thirty minutes of practice with the equipment in shallow water, we were ready to go explore the underwater world. 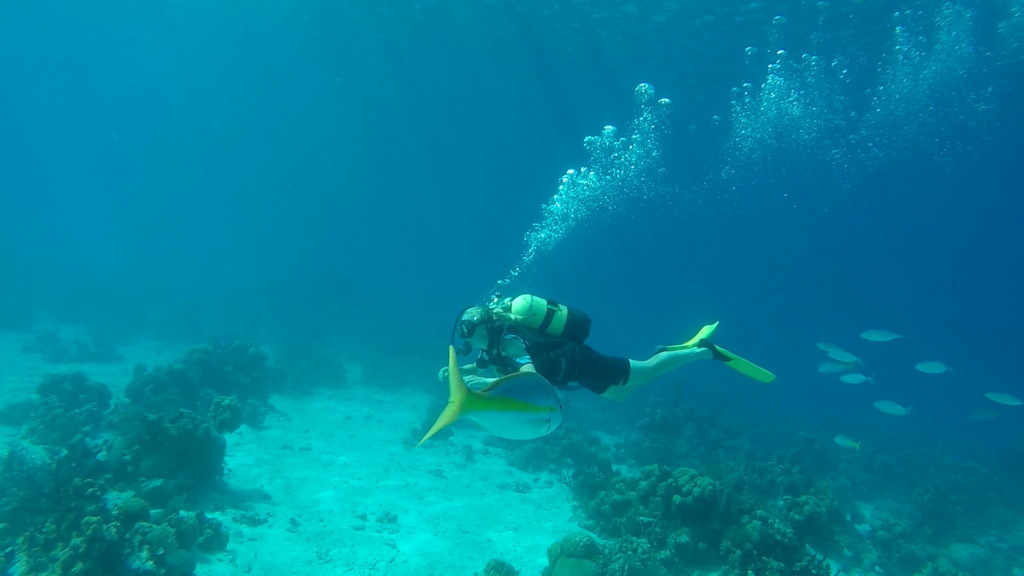 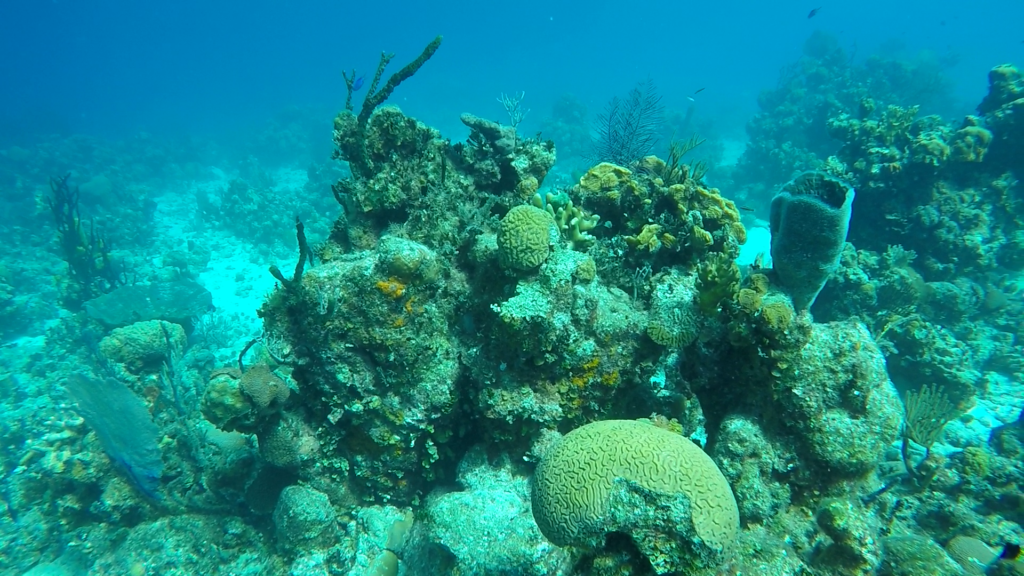 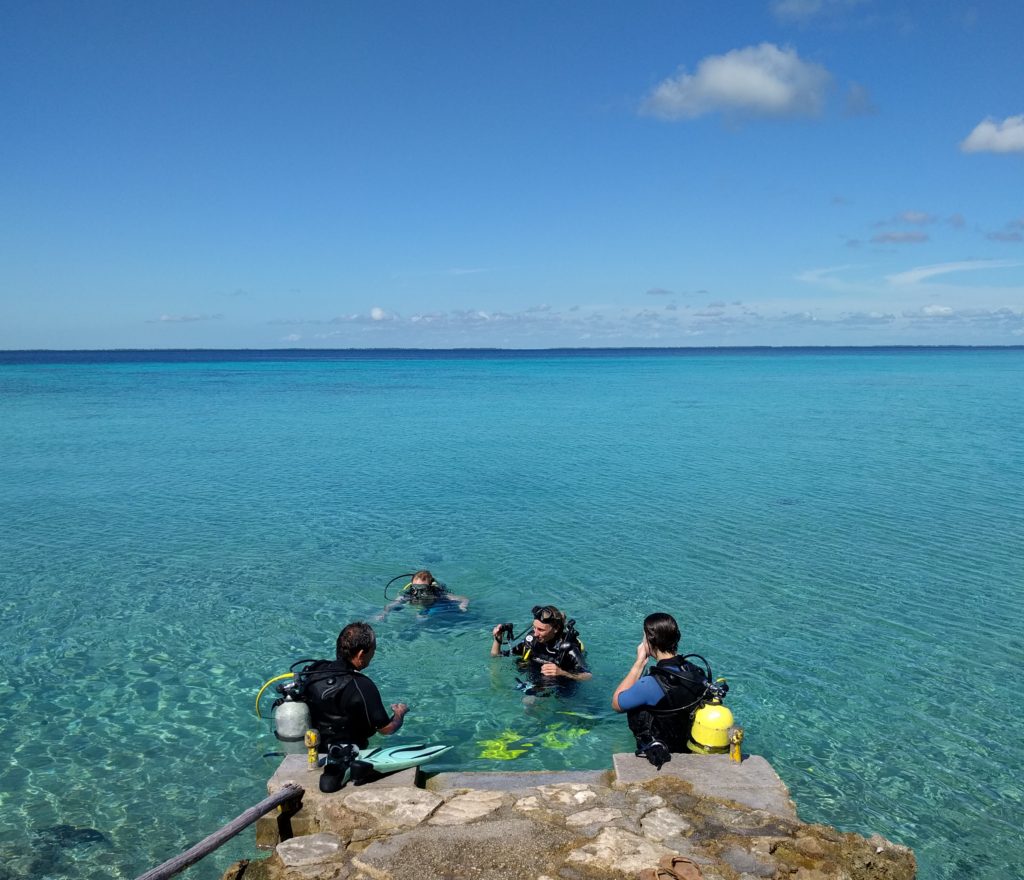 From the cozy beach life, we headed off for the western region of the country and the town of Viñales.  It is famous for its tobacco, coffee, beautiful mountains and temperate climate. 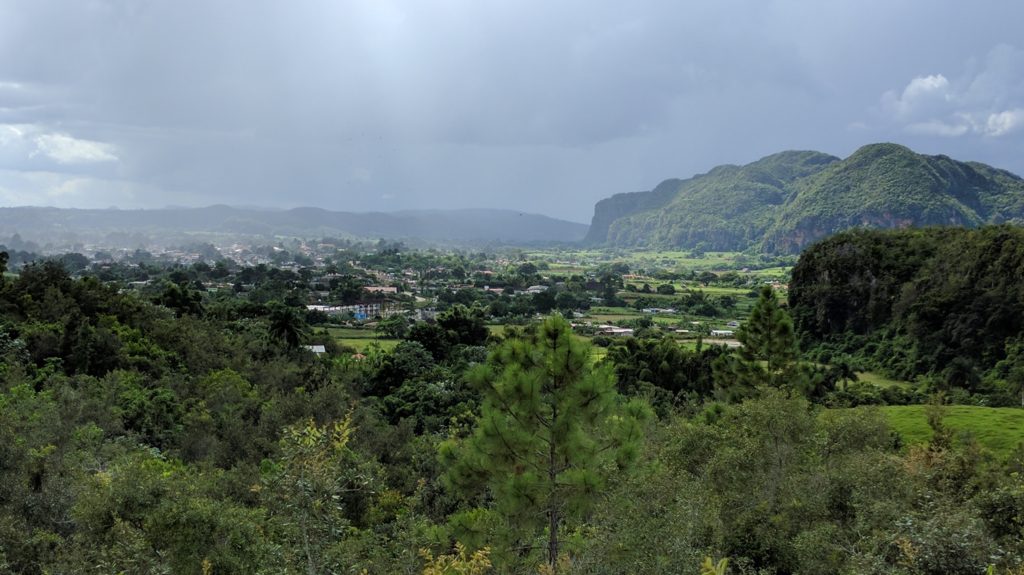 After finding our casa for the next two nights, we enjoyed a rum and coke before the evening’s end in cozy Viñales.  The following morning we separated from Cole and Megan as they went on an extended horseback tour while we had plans to go for a hike to see where the rock climbing was that we’d read about.  We quickly learned that we cannot simply go for a hike without a guide, and the climbing was relatively far away, so last minute we negotiated a deal for a short horseback ride as well.  It included a stop at a tobacco farm as well as a coffee plantation with locals offering information about everything along the way. 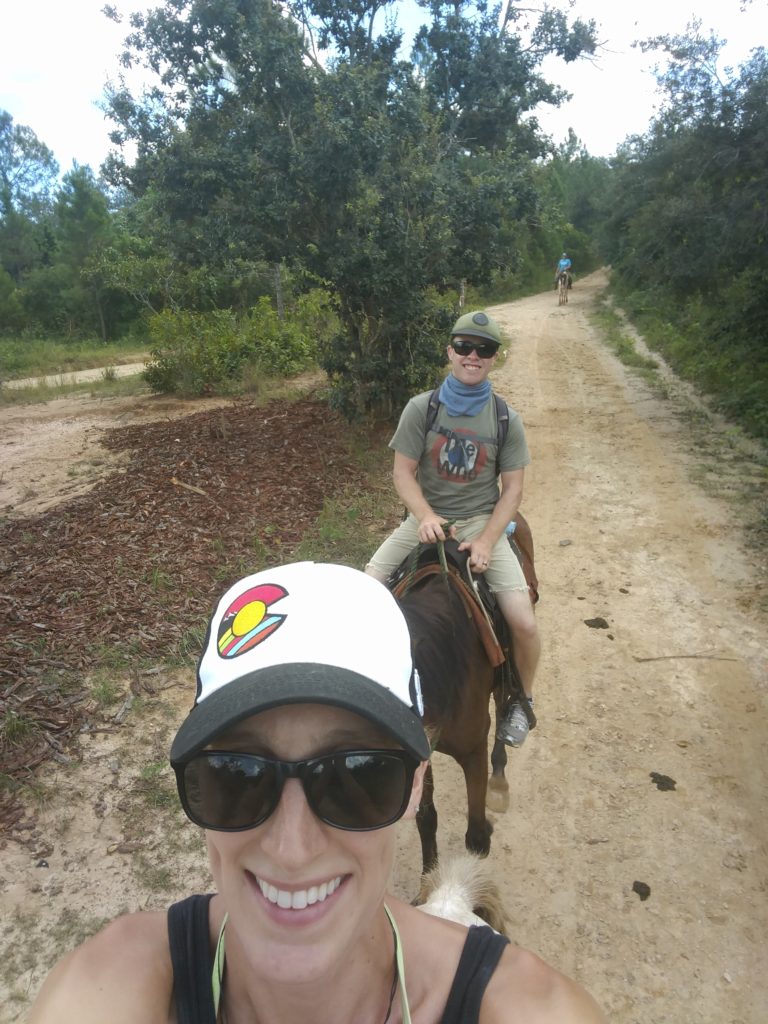 Fortunately we had a guide to ourselves, and he let us run the horses pretty fast.  Matt’s was named Mojito and was always hungry, finding a way to snack on anything he could grab his teeth on.  Sarah had Palmita, who kindly guided her through the trails. 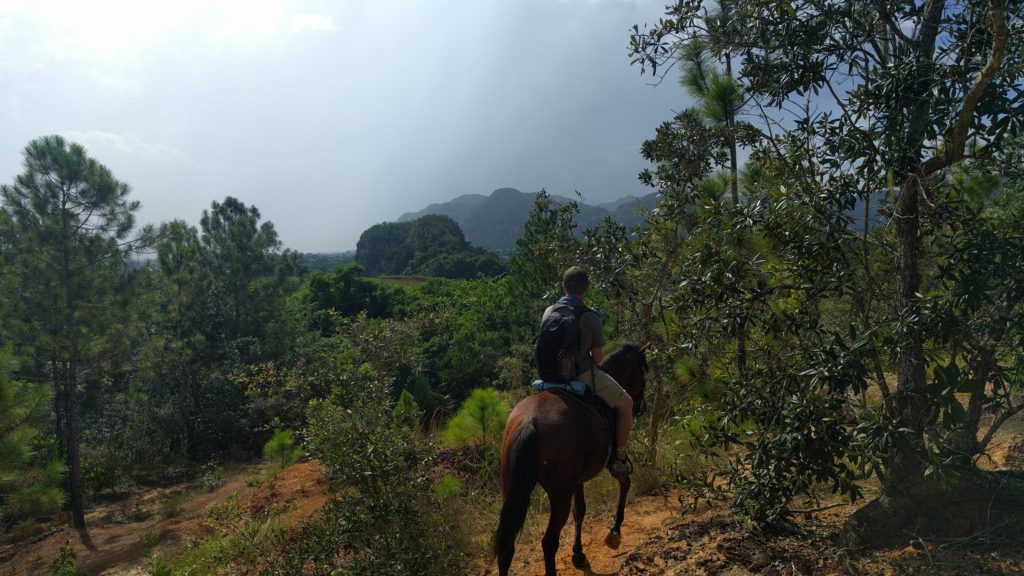 The tobacco farm we stopped at first was very informative.  The campesino gladly showed us how they are rolled along with the anatomy of the cigar leaves.  This particular farm did not use any pesticides or man made fertilizers in the growing process, nor did they use any preservatives for the leaves.  Instead they cured the leaves with a mixture of lime juice, honey and other secret ingredients only they know.  The whole time we were able to enjoy one of their fine cigars and we eventually bought a few more to send home as gifts.  We also learned that most Cubans enjoy dipping the mouth tip end of the cigar into honey prior to smoking, which apparently Che did, and it really kicked it up a notch. 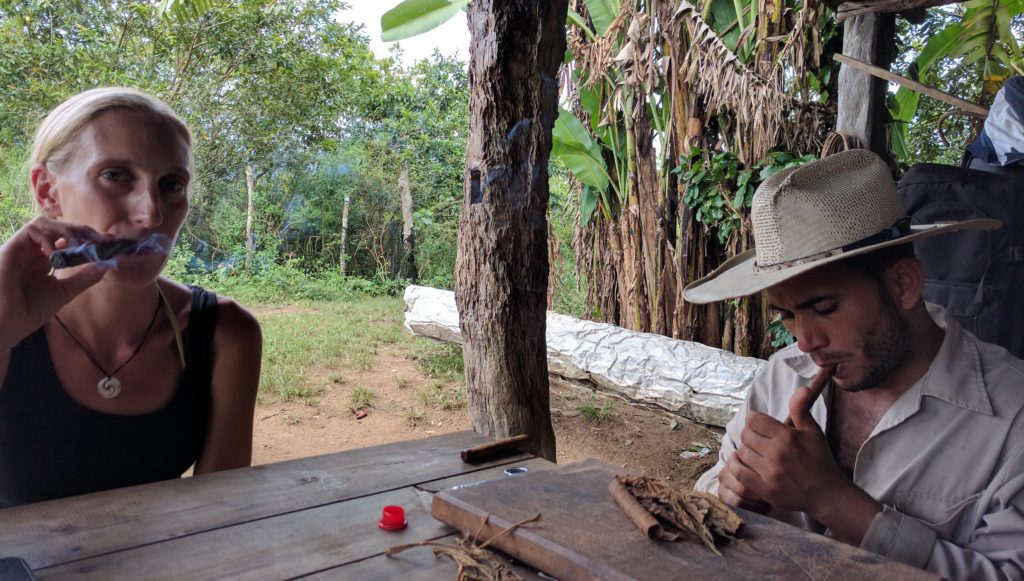 Saddling back up with a nice nicotine buzz, we were off to the coffee plantation.  Here we not only learned about the coffee produced in Cuba, but got to extract some sugar cane juice straight from the plant itself, which we thoroughly enjoyed drinking after the tour.  The local farmer, Yoandry, had a gregarious personality and spoke great English.  He turned out to be a dance teacher who we later met up with in that night at the dance club where he works. 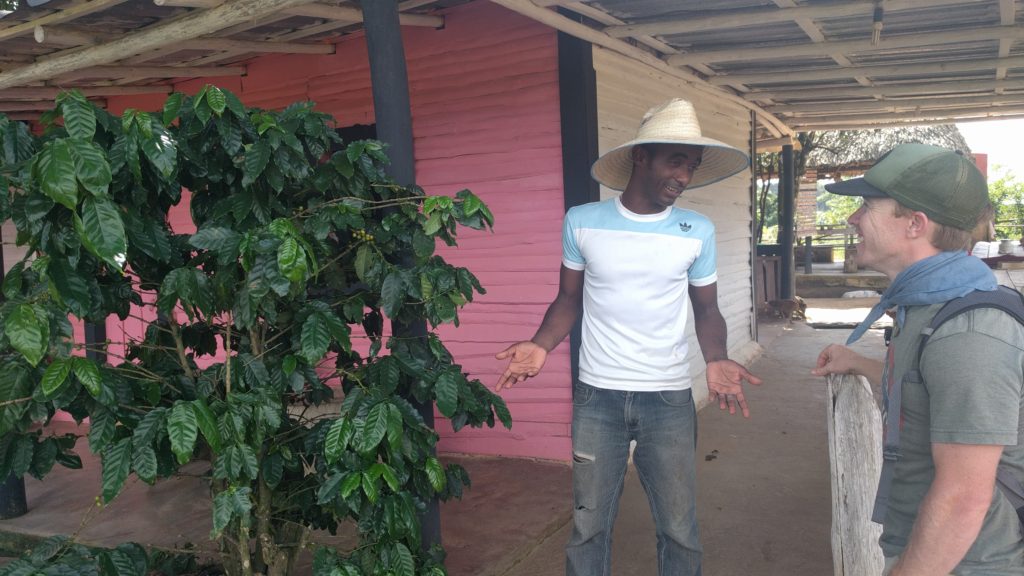 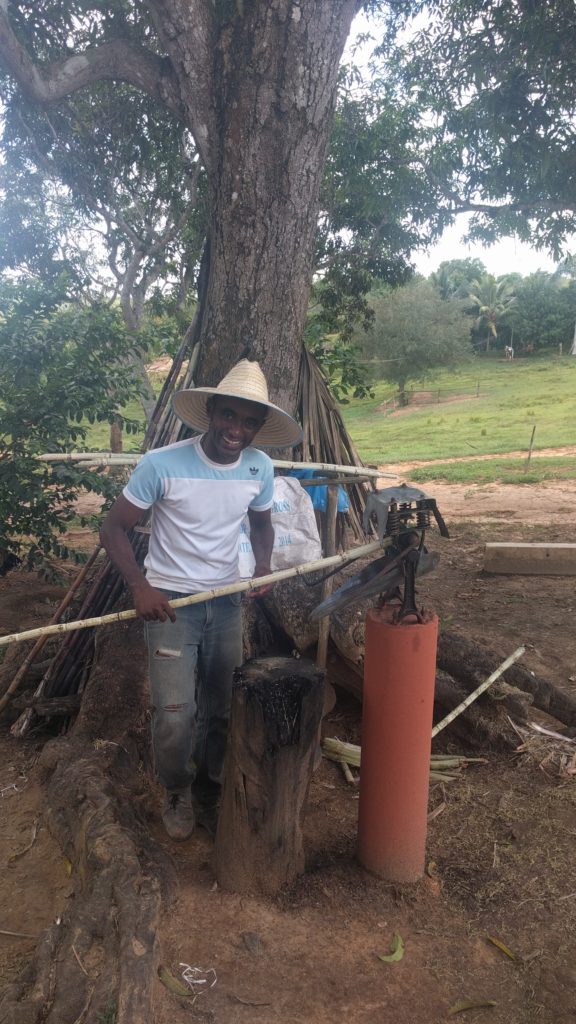 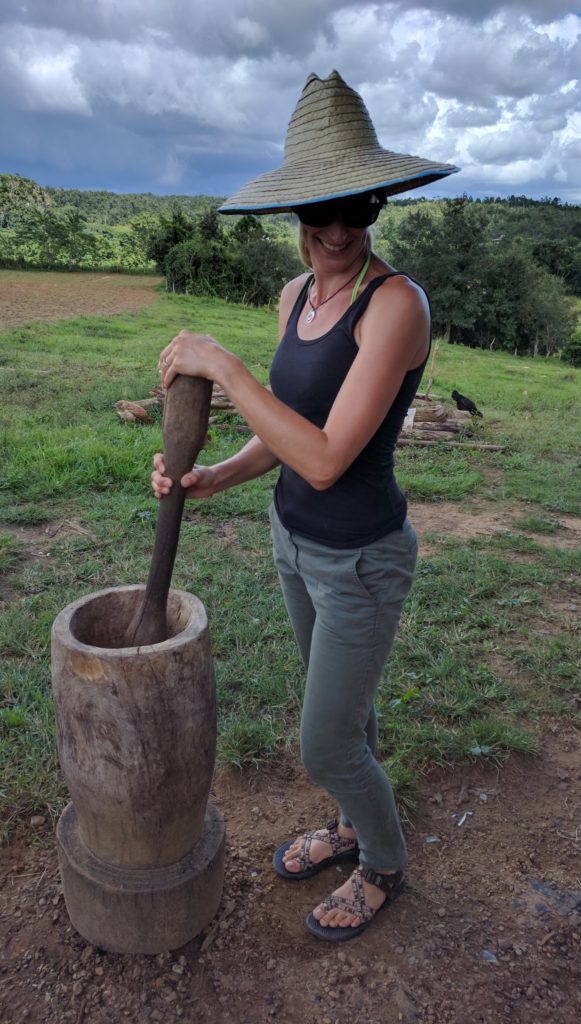 The sugar cane juice, guarapo, was quite the treat and as fresh as it gets. 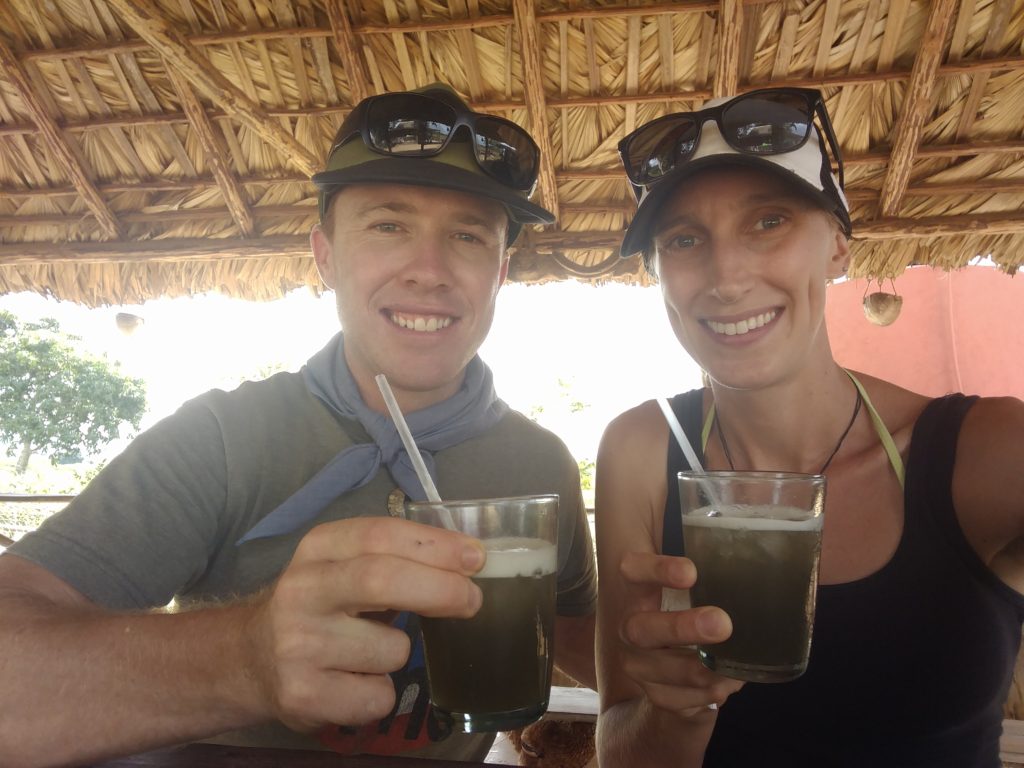 Making our way back to the casa, we met back up with Cole and Megan to exchange tales of the horseback rides and to get ready for dinner on the town.  We’d heard about a local spot that had amazing homemade pasta and it turned out great along with the sunset on the way there. 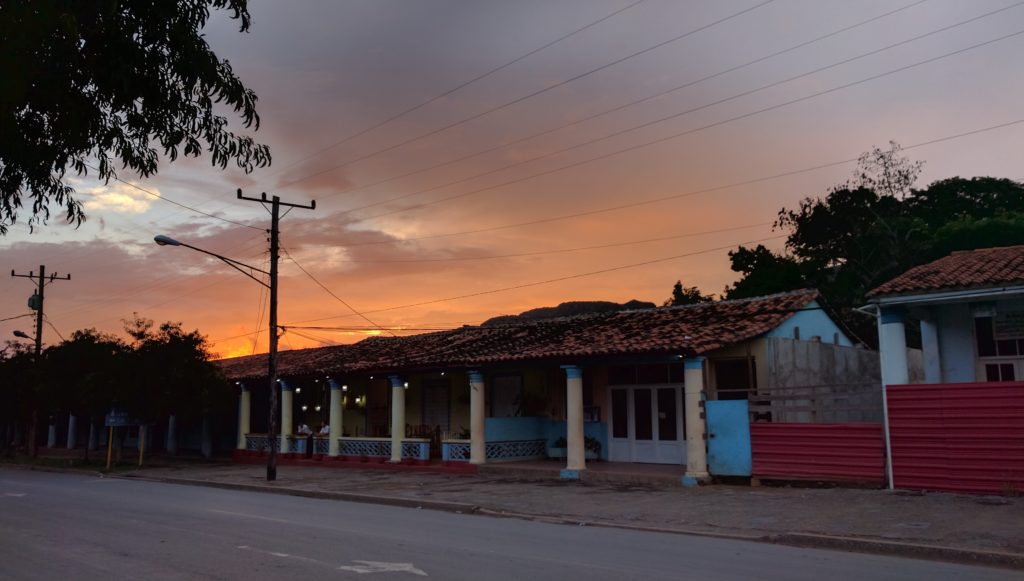 Later we found ourselves at the rumba bar where our coffee guide worked.  We had some more mojitos, and with the urging of one of the band members to get up and dance, we did just that. We were the only goofy white Americans trying to dance like Cubans, but as they say, if you don’t come to Cuba and dance, you really didn’t come to Cuba. 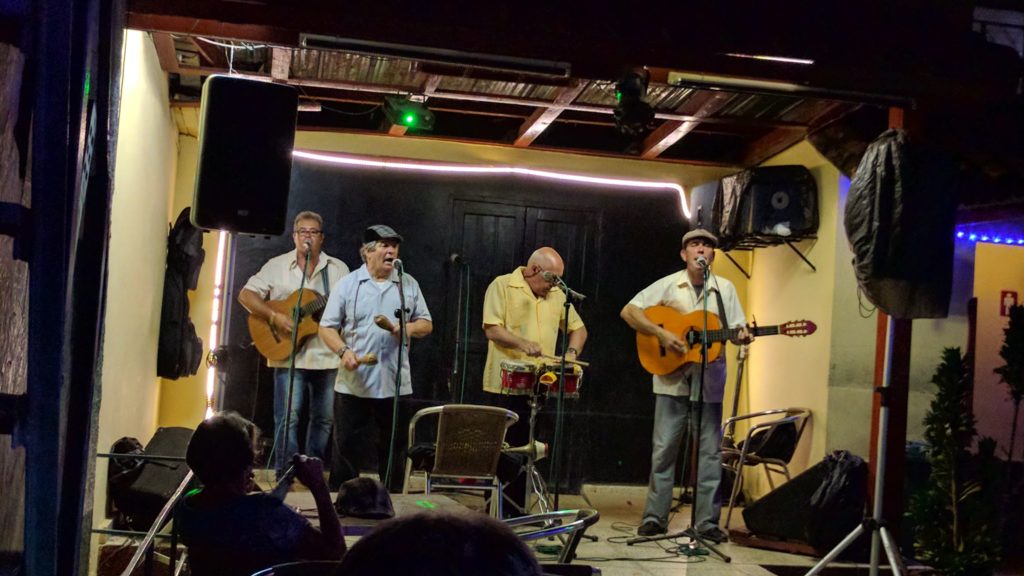 Our time came to an end if Viñales, but we knew that someday we’d be back to spend more time in the beautiful mountains with the friendly people.  On our way out we decided to stop at a large mural that had been painted on the cliff faces.  What we saw blew us away at the size and at how much paint was used to cover the cliff face. 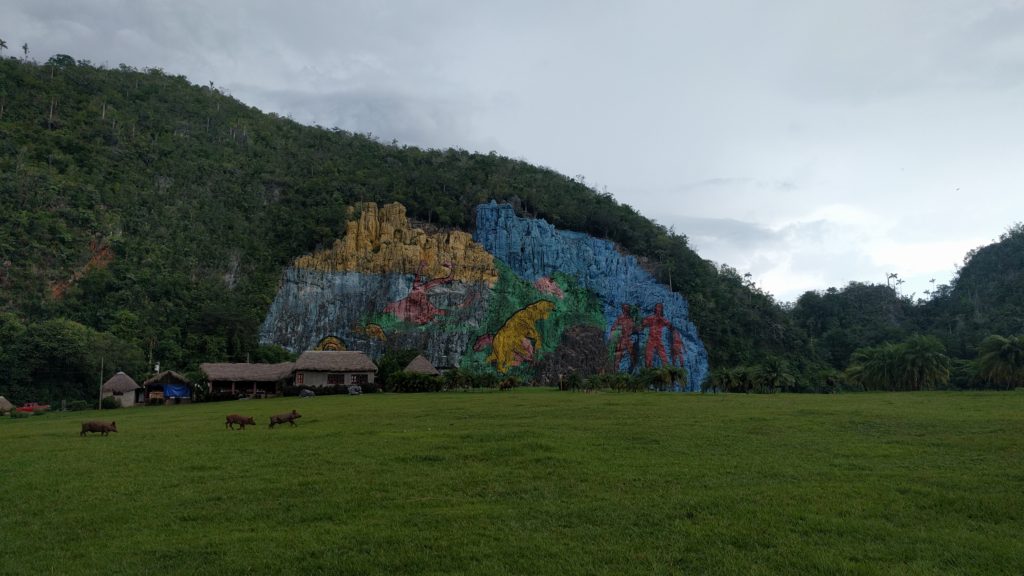 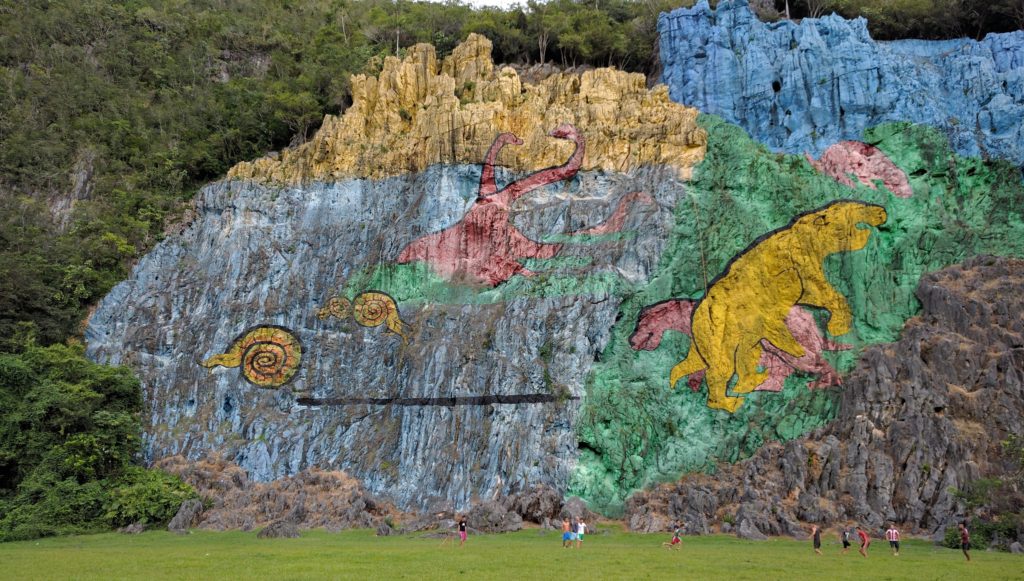 Along the road back to Havana, we stopped at a cave that was once used as a slave hideaway.  Today it is a night club, Palenque, and though we were there bright and early in the morning, we knew why people loved to party here. 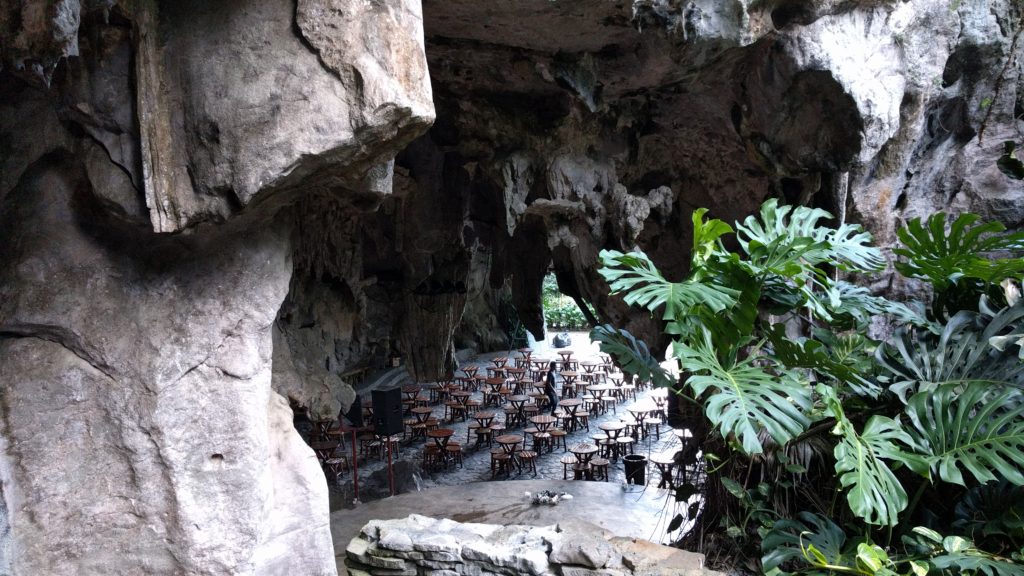 With one night left in Havana before heading back to Mexico, we made the goal of finding some good food off of the beaten tourist path.  We eventually found a great Chinese restaurant where we celebrated Cole’s birthday with a flaming flan for dessert.  We walked around in areas we’d missed at the beginning of our stay checking out some memorials of the famous revolutionaries and the important poet Jose Marti. 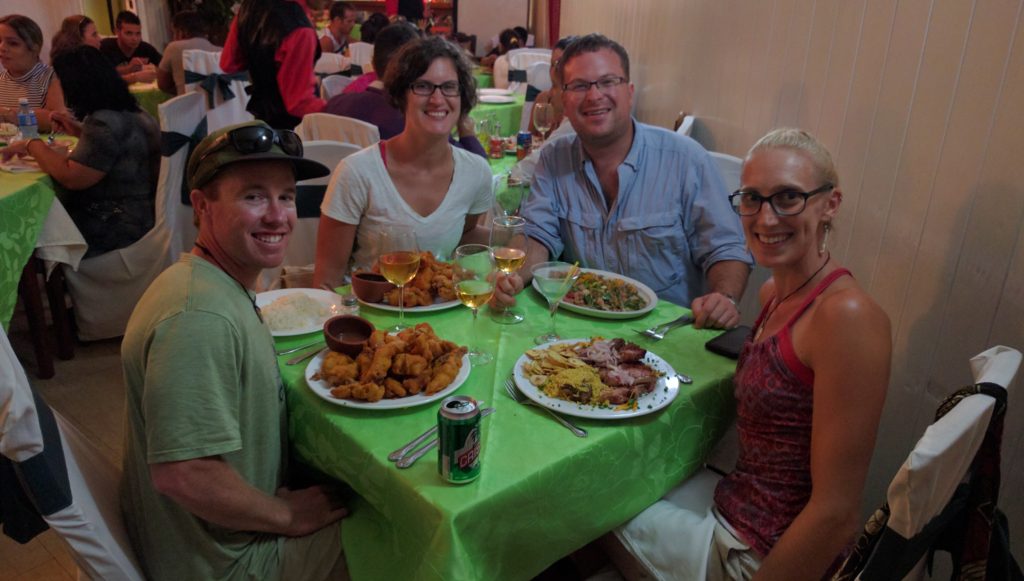 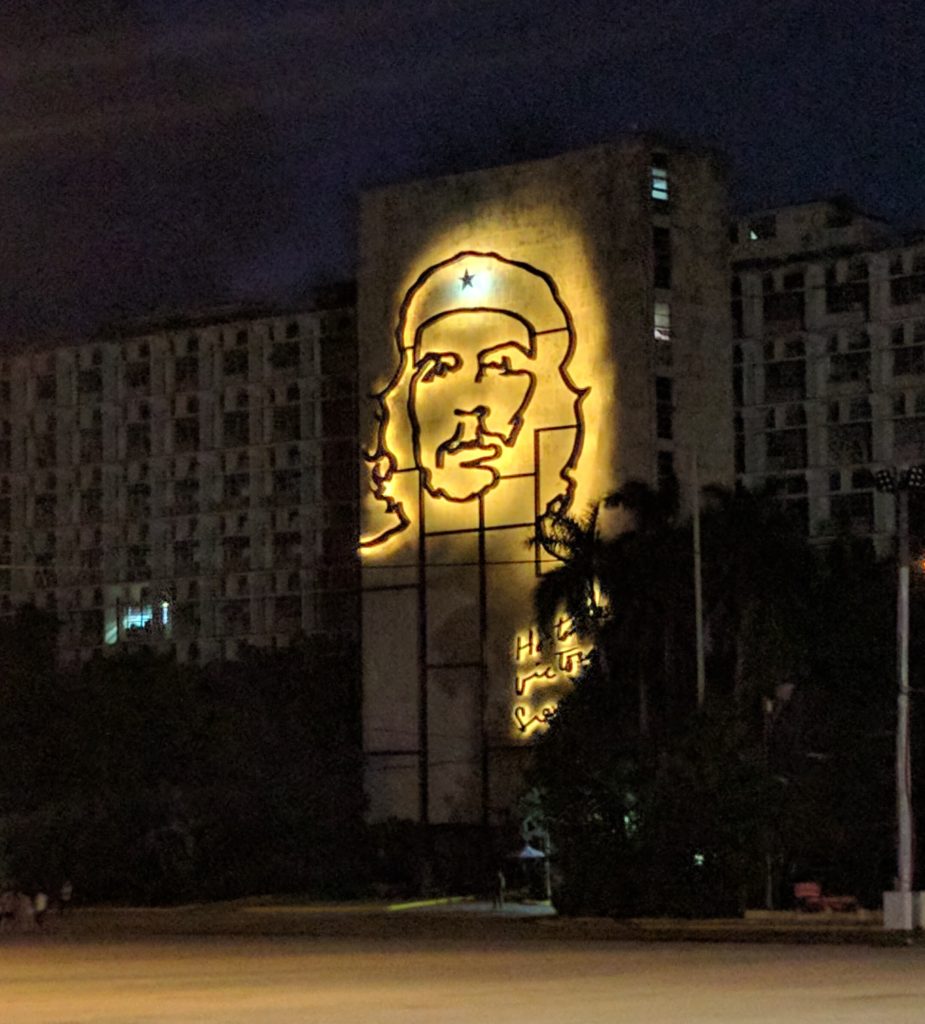 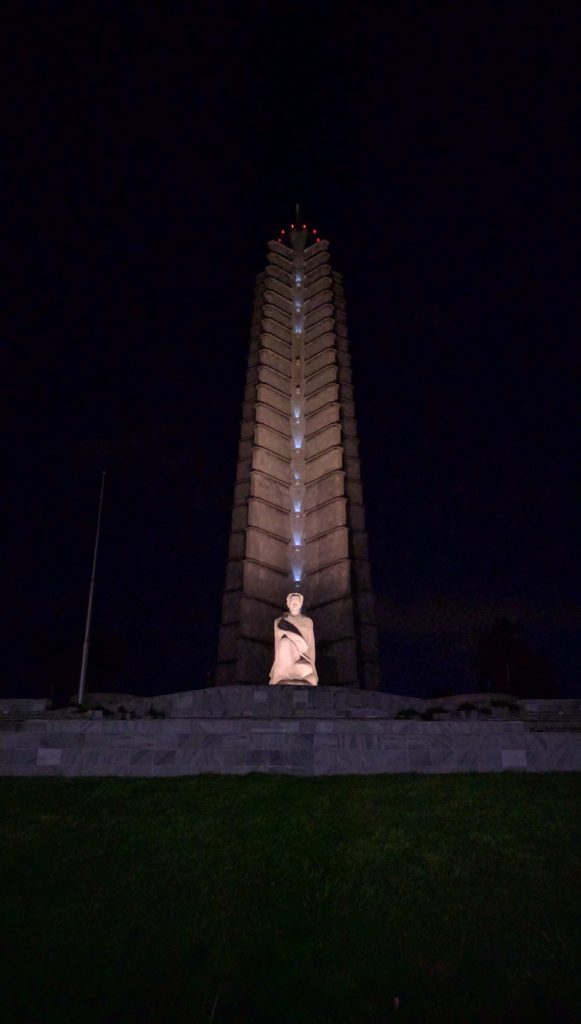 We were up early the next morning to catch a flight back to Cancun and our trusty Koru.  Cuba is an amazing place, and although the people are still struggling to get by, changes are definitely underway.  It was quite obvious that soon there will be more access to things like internet and hopefully more diverse foods.  It really is a shame that such a large Caribbean island, where every fruit or vegetable under the sun can thrive, seems to be withheld from the population.  Despite the lack of resources that we Americans take for granted every day, the Cubans are some of the most beautiful, kind, proud and hardworking people we’ve ever had the privilege to see and meet.  We know we will be back someday again…