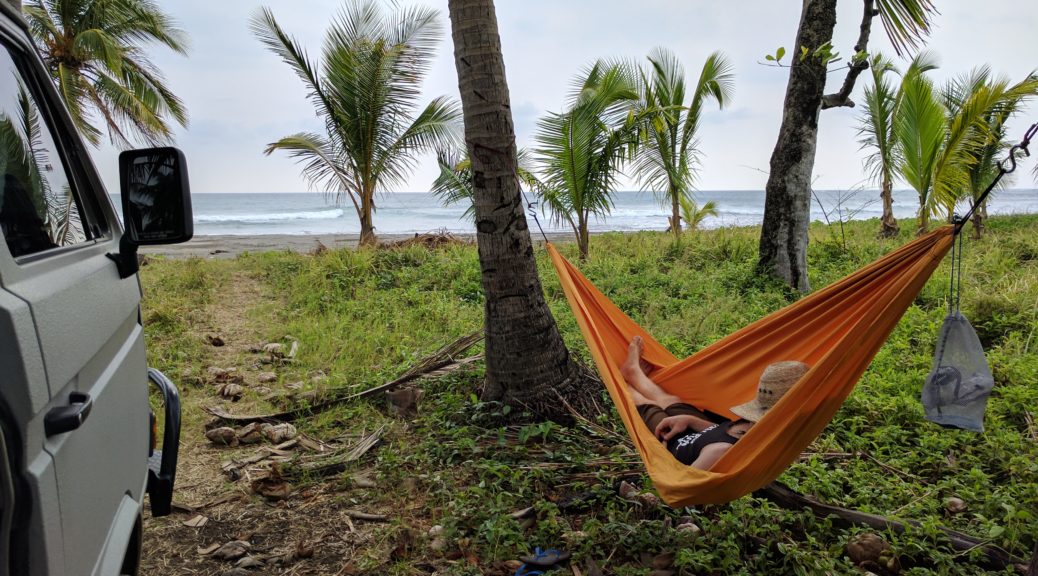 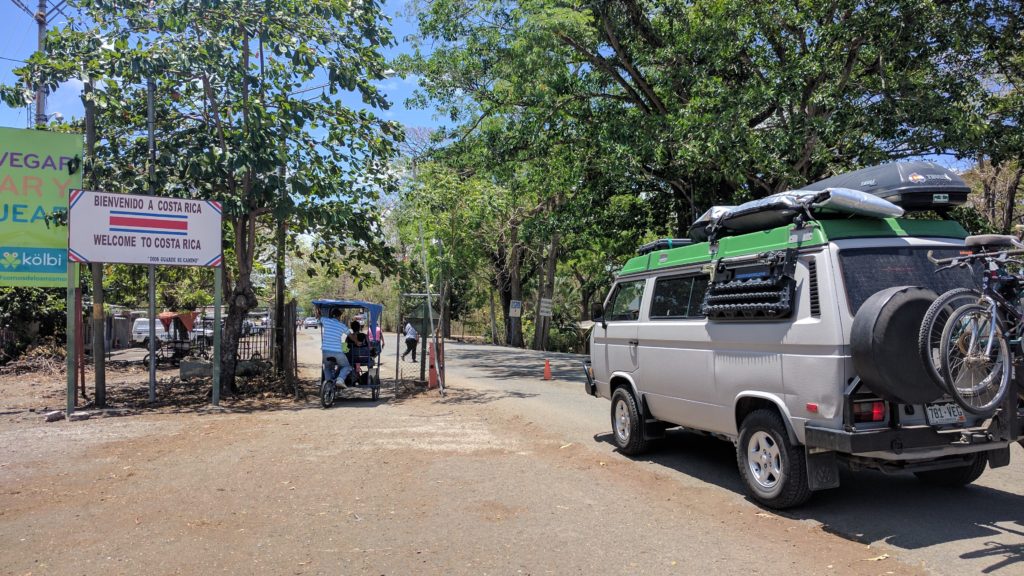 The time was upon us once again to traverse across another political border, this time into Costa Rica.  Leaving Nicaragua behind for now, we eagerly anticipated the country known for ‘pura vida‘ which has a deeper and more profound meaning to the locals, which we quickly began to feel once over the border. Famous for it’s biodiversity, lack of military, happy people and potable water, we were ready to jump right in. 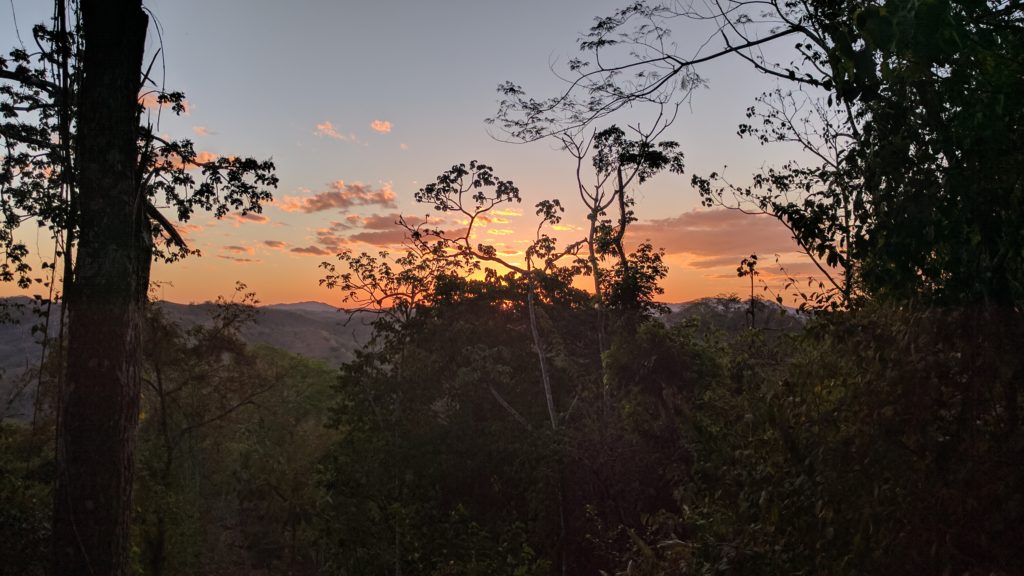 Crossing the border just a few days before Easter, avoiding the beach during Semana Santa craziness was our first priority. Just over the border, we stopped at a Finca with camping owned by a very nice Swiss woman. Right away we saw crocodiles, monkeys, wild and crazy insects, and a sloth.  The biodiversity and wildlife habitat had appeared to do an about-face as soon as we crossed into Costa Rica, surely in part due to geographic/climatic changes and the government protecting the land. 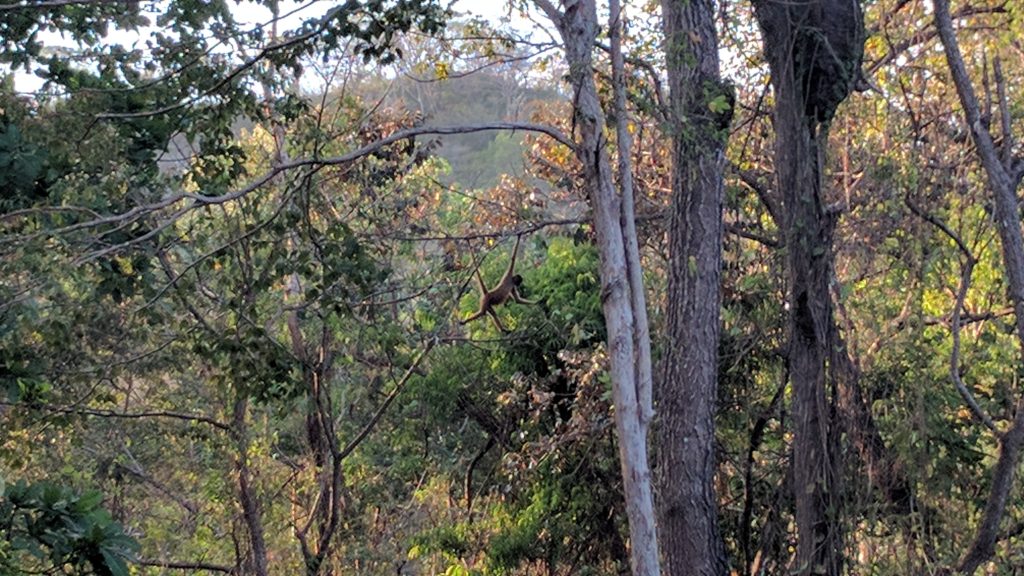 Our next plan of action was to check out one from a list of many incredible National Parks in Costa Rica, Rincon de la Vieja in Guanacaste. There, we were treated with nice hiking trails, views of nearby volcanoes and most importantly, hot springs! Despite having been hot for weeks and not even considering something like this, we were high enough in elevation with cool air, cold rivers and waterfalls nearby, so we went for it. 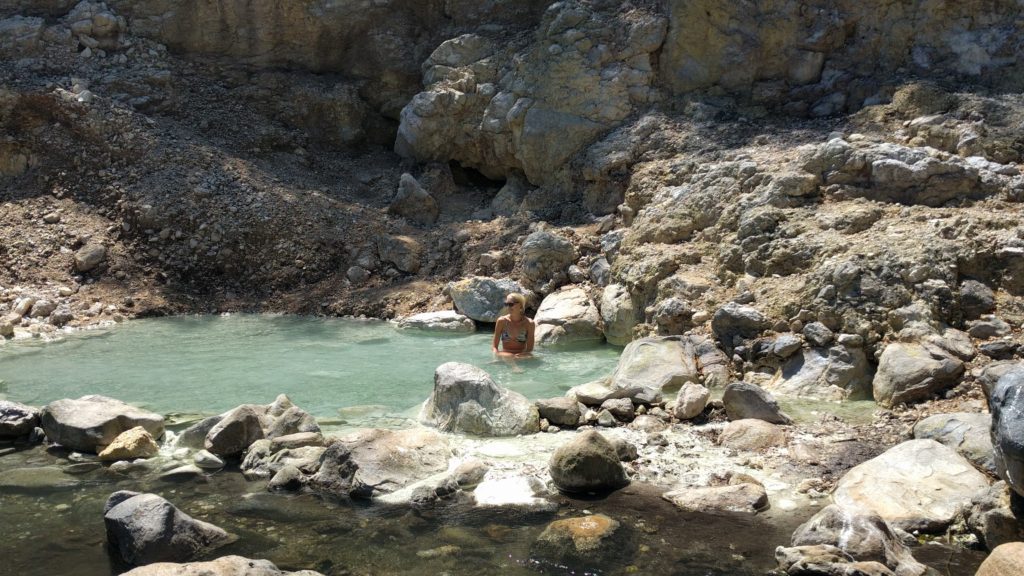 After a nice hot soak, we made sure to spend some quality time in a shady river area with a fun waterfall to play in. Our bodies and minds were rejuvenated and we felt as clean as we’d been in a while after weeks of warm salty water and air. 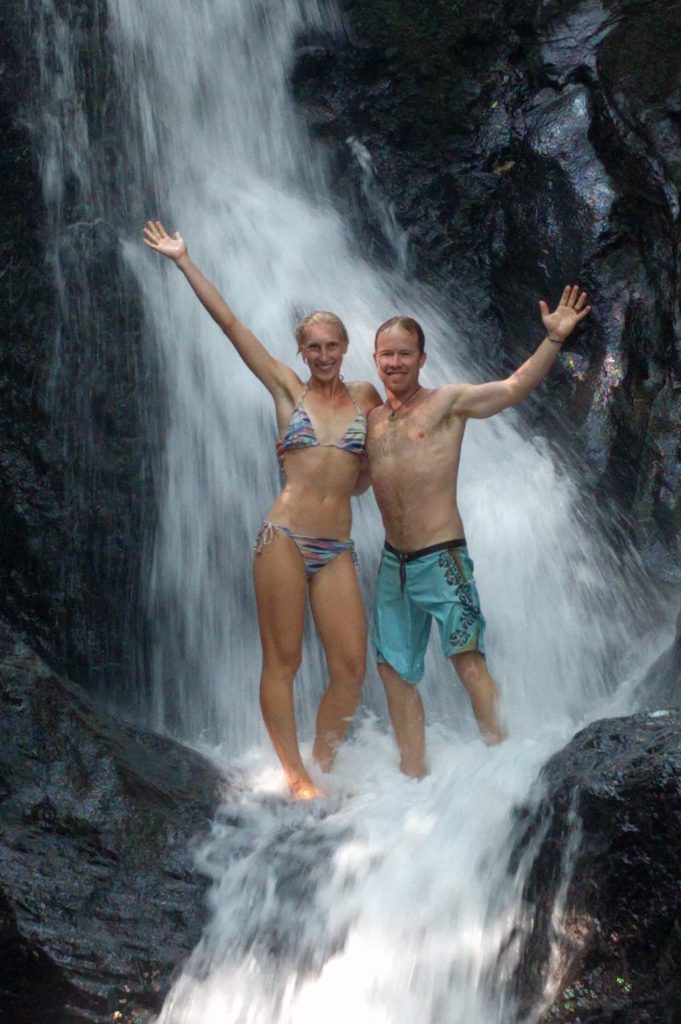 Feeling the good energy of the high mountains with fresh water and air, we kept kruisin around to check out Lake Arenal and the famous Volcano owning the same name.  As we approached the area, Sarah discovered a beer brewery online, and having not tasted a delicious micro-brewed beer since we left the States, naturally, we made a nice loooong stop for the day. 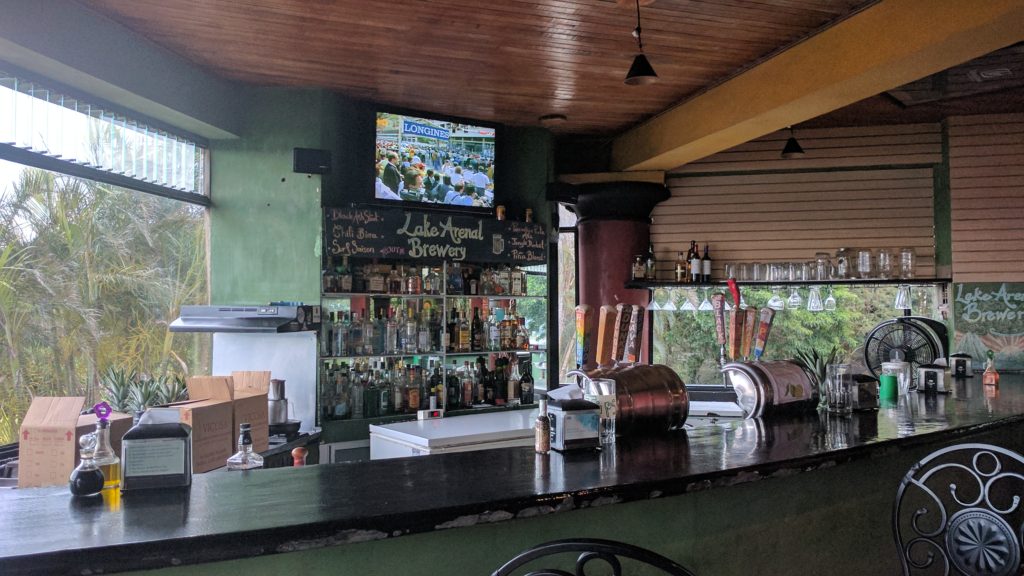 Chatting with the owners, we discovered they were from Carbondale, Colorado! After many stories and beers, we painstakingly pulled ourselves away from the good beer to find a spot for the night along the lake. 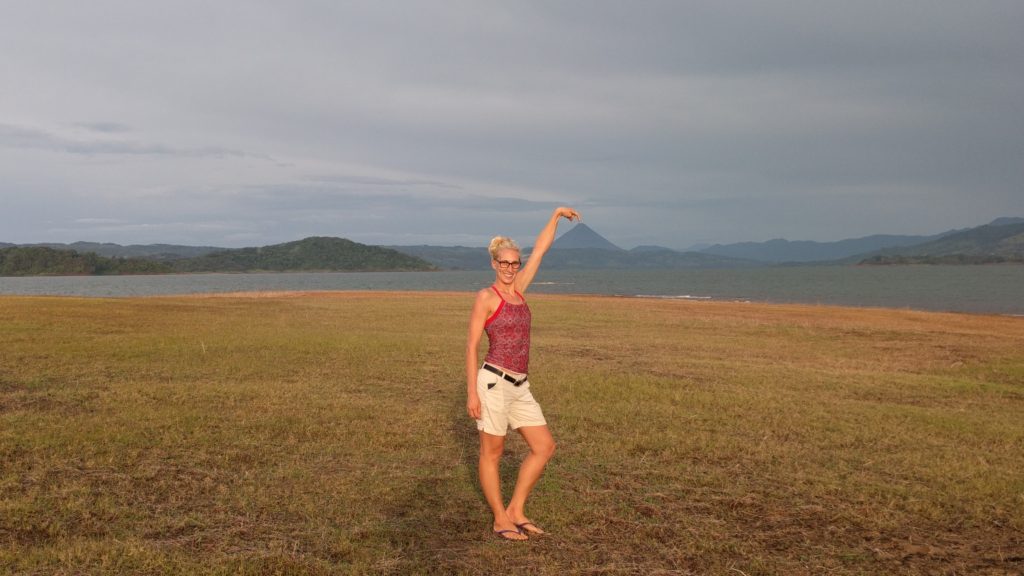 It was a good thing, because we proceeded to witness one of the best sunsets yet with views of Volcano Arenal with the whole area to ourselves!  It was a moment of shear beauty, and it occurred to us that it was earth day, inspiring us to feel incredibly blessed with the ability to witness the earths profound diversity and unrelenting beauty. 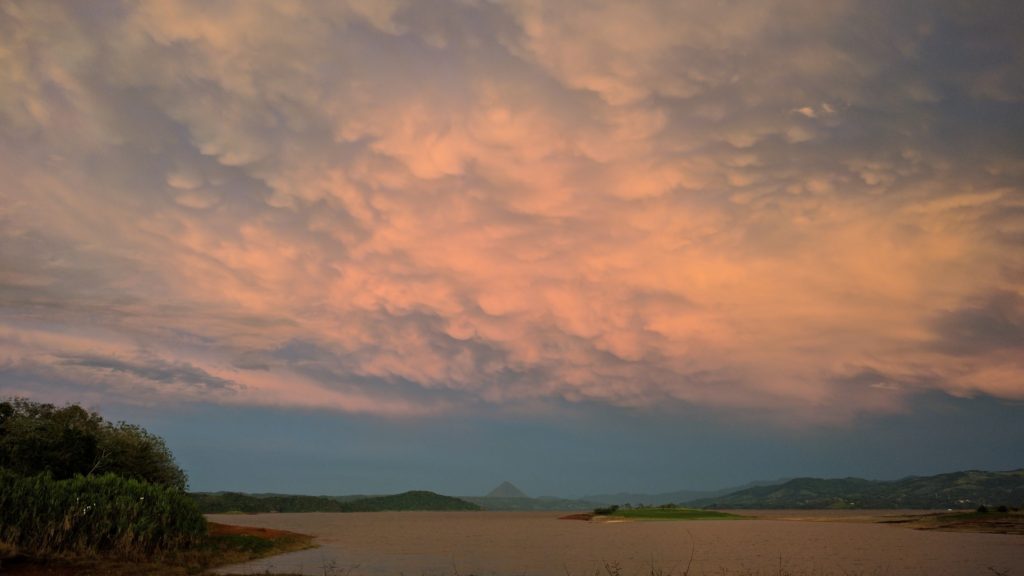 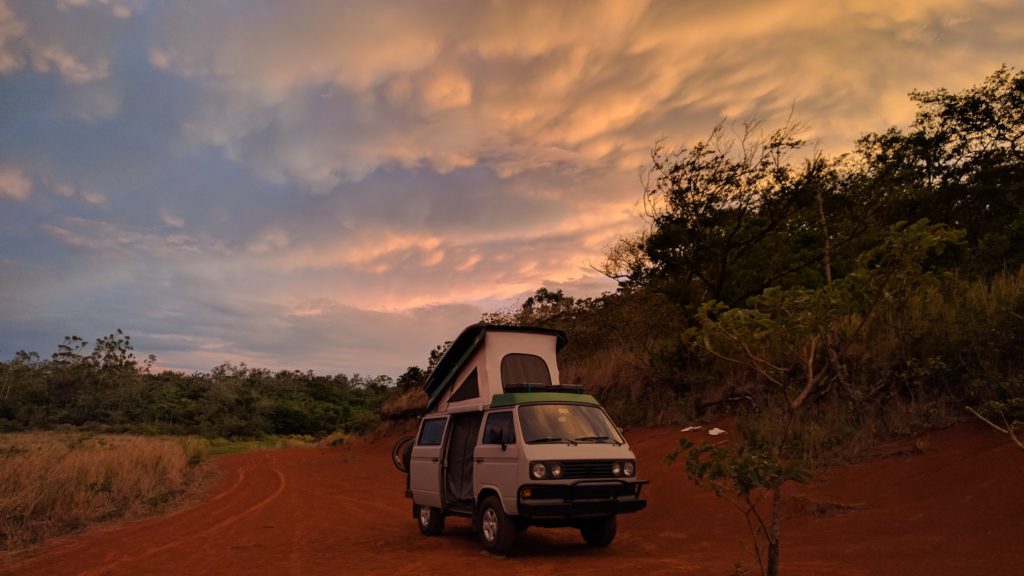 Up bright and early, another quick swim and wash in the fresh water of the lake, we were off on our way towards the Nicoya Peninsula and its famous beaches and quaint towns. 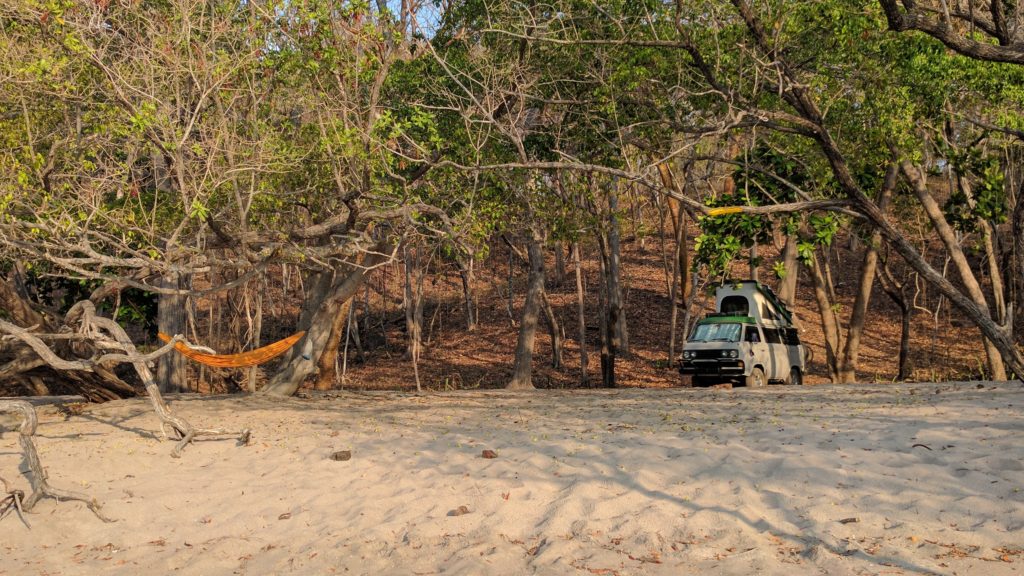 One of the most amazing aspects of Costa Rica for us so far has been the ability to camp beach-side almost everywhere for free.  It has reminded us of the US in that regard as well as the priority for protecting large tracts of natural lands.  We stumbled across beautiful beach after beautiful beach as we traveled south along the peninsula.  One that stood out was Playa Conchal, where we met a very friendly ‘Tico’ (Costa Rican) family that camped near us. 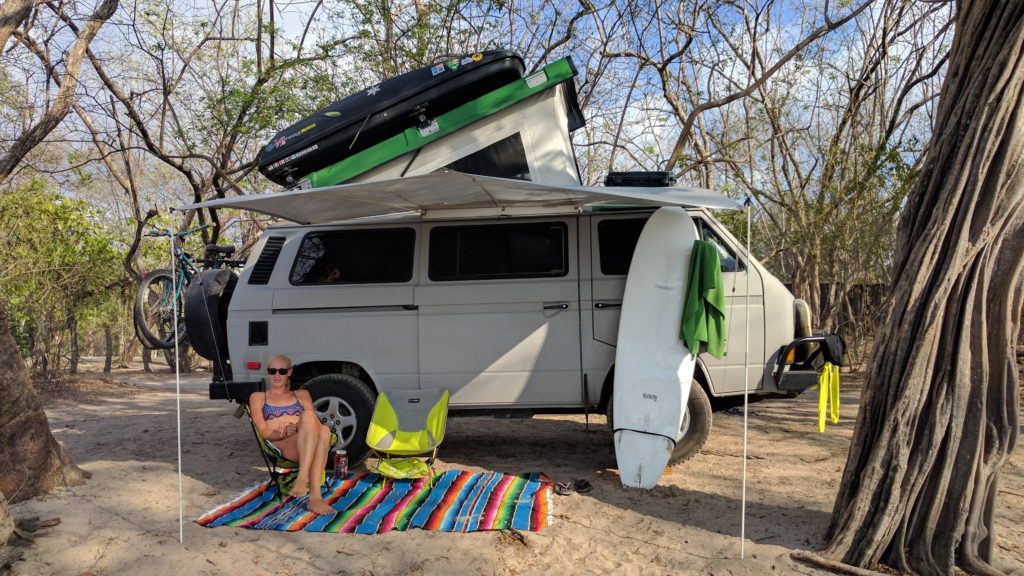 We all shared food, drink and stories together. The family even started a fire on the beach one night to roast marshmallows and invited us to join! 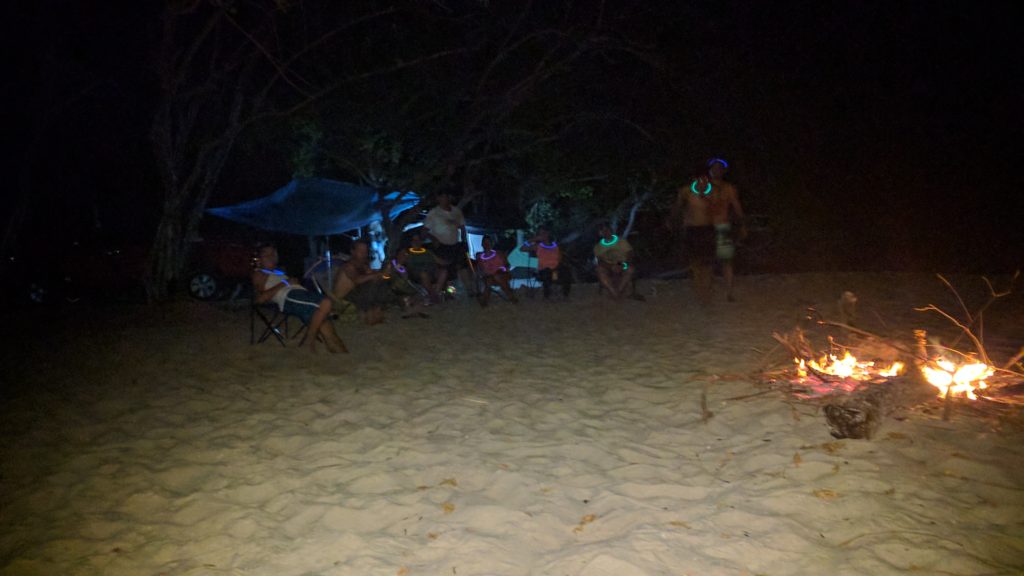 We really enjoyed our time here, with the pleasant white sand beaches and swim-able ocean on one end, and a small beginner point break on the other to practice our surfing.  After the fun weekend with the locals, we crept our way south stopping at several other small and remote beaches with great camp spots and seemingly endless surf. 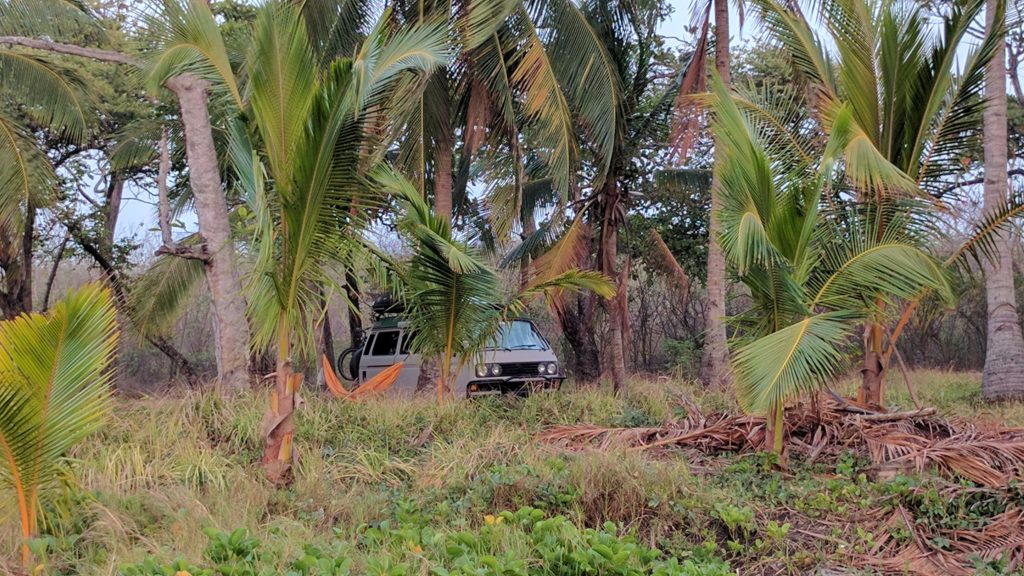 The roads maintained their less-than-appealing rough nature but made us realize why we found so many remote and beautiful spots. From one-lane bridges to standard river crossing, and all the speed bumps you could dream of in between, driving the Peninsula has been quite the adventure. 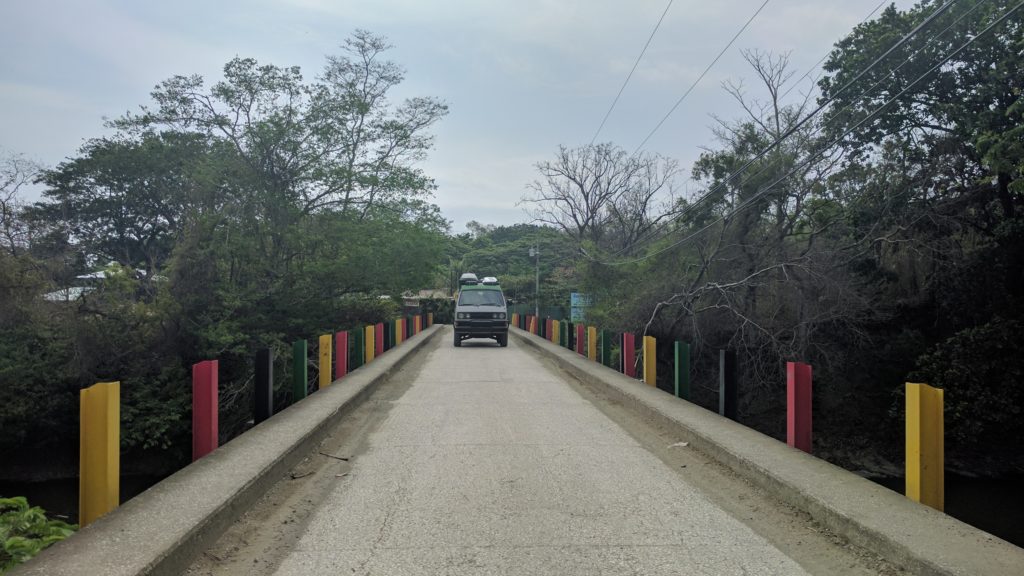 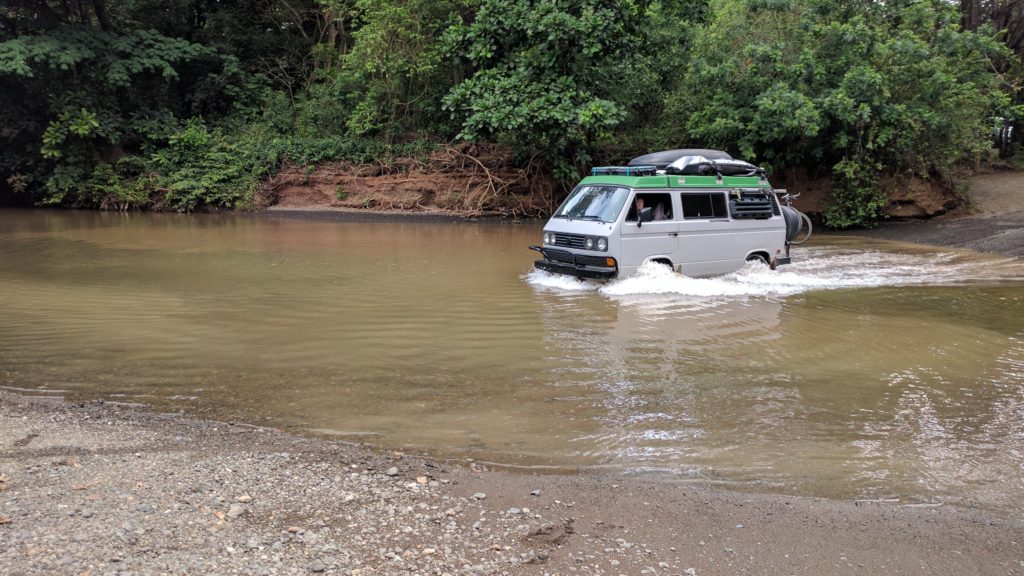 After many days and nights in the van, both of us were starting to think about a break from the day-in, day-out routine of vanlife. As fun as living in a van has been, we both were feeling the need to have a bit more space for a quick second. Just as these feelings materialized, we met a nice tico named Steven from the capitol San Jose while playing soccer on Playa Avellanas.  We quickly became friends and he invited us to park at a house he and his friends from New Hampshire had rented nearby.  It was incredible timing, as we desperately needed to clean the van and just have some space. 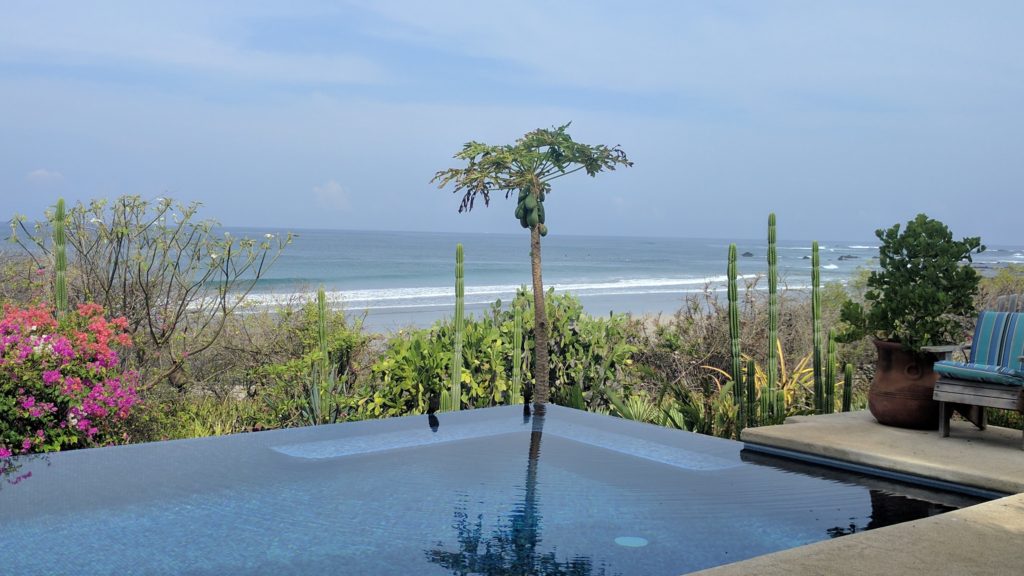 With a really nice pool, kitchen, safe parking space, and located right in front of the great surf of Playa Negra, we felt like we hit the jackpot. We gave Koru his much needed clean and casually relaxed in some shady space for 2 nights with our newfound friends.  We even cooked up the rest of our mole from Oaxaca, Mexico in a grand fashion due to having a nice fully loaded kitchen to work with. 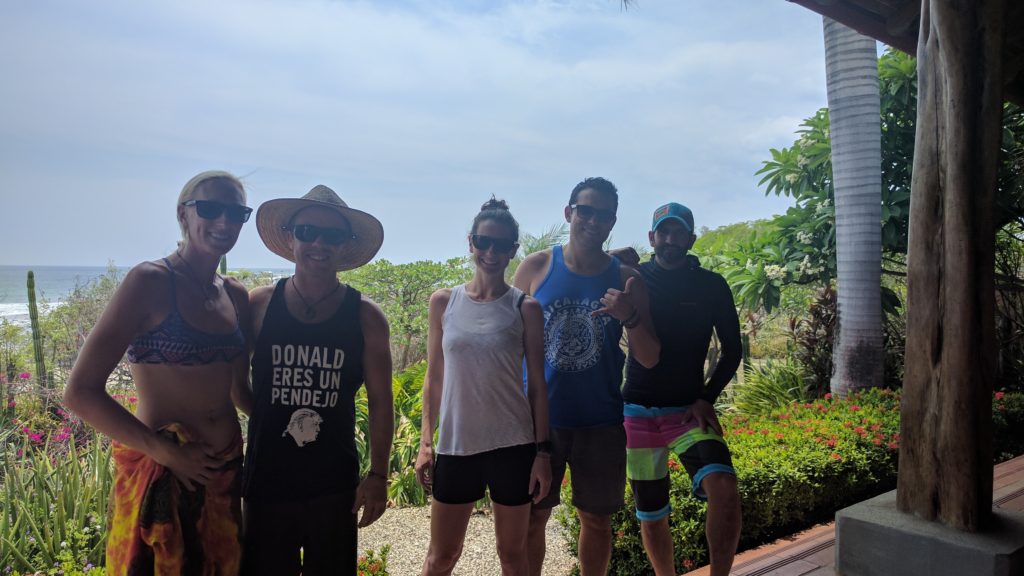 Feeling re-energized and clean, we continued towards the popular area of Nosara. Here we realized Costa Rica is developing at a fast pace, with restaurants and hotels all over. Still having a desire to take a break, we were keeping an eye for a volunteer opportunity via the website workaway.com, where travelers can find several types of opportunities all over the world.  However, as we were looking for a place to park for the night in Nosara, dumb luck struck again.  We met 2 friendly guys from Colorado checking out our van. After hearing about our trip, they invited us to park at their place too, where the 2 couples with adorable daughters were vacationing! 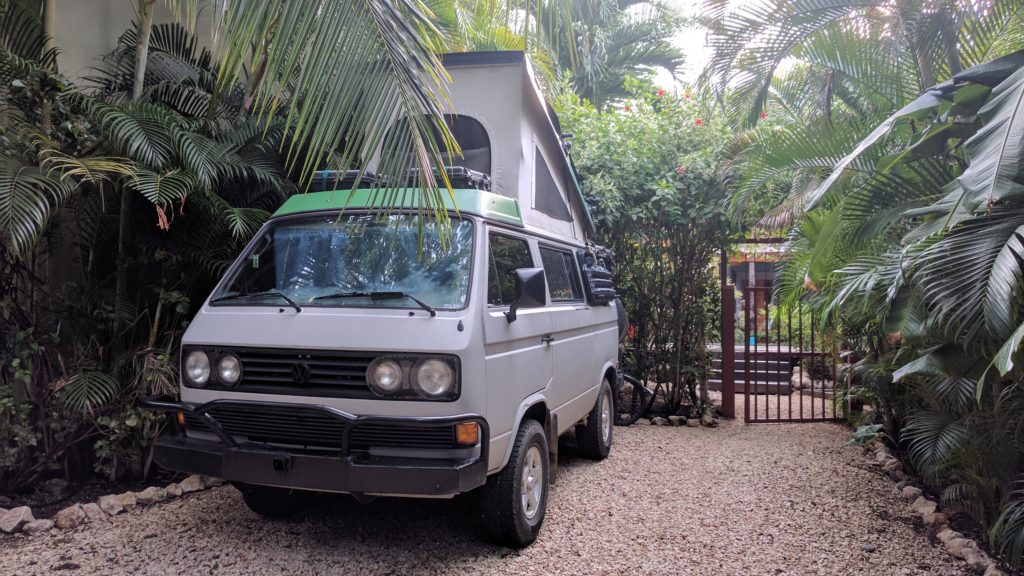 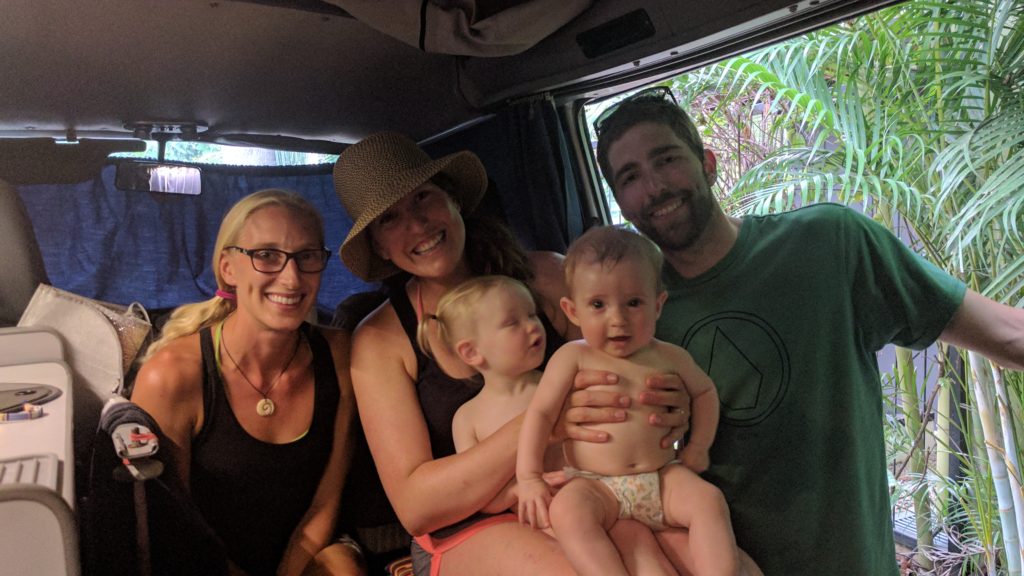 Again we were feeling the good energy from fellow travelers and good luck appeared to be all around.  Ben, Molly, Kyle and Kelly with daughters Nora and Carolyn gladly took us out to a nice Italian dinner where we had a great time socializing and sharing stories.  They live in Summit County and have created amazing lives for themselves, with good jobs and plenty of time off to raise their families. We were very inspired by them and plan to connect again whenever we venture back into Colorado. 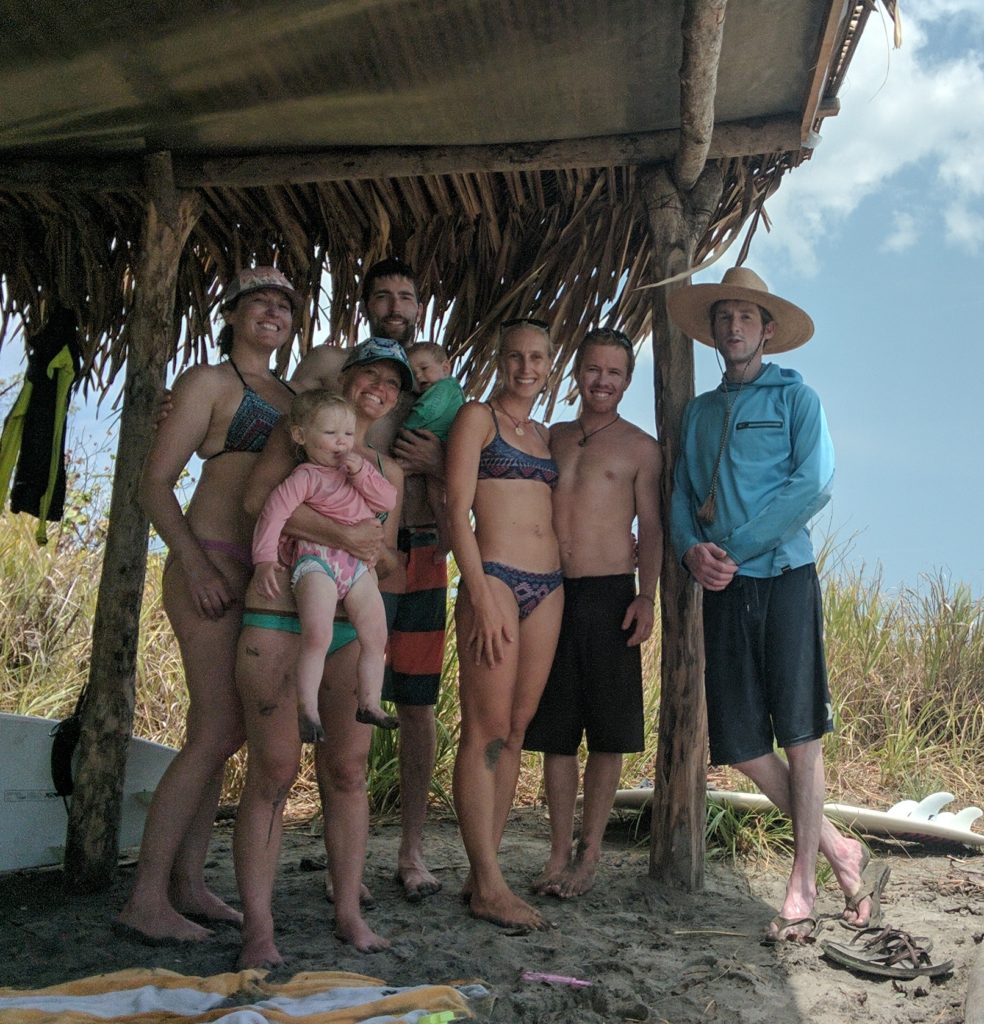 Eager to keep the good times rolling, we reached out to a hostal in Samara, just south of Nosara to possibly volunteer for a couple of weeks. Mere minutes after inquiring, they emailed us back right away with 2 openings for volunteers.  Taking it as yet another sign, we saddled up and made our way to Samara.  We plan to stay here for at least 10 days while we have a van break and explore the area, full of surfing, snorkeling, hiking and swimming, not to mention a cool little town with good food and friendly people. The owner of the hostal even owns one of Koru’s older cousins, a ’71 air-cooled VW bus. 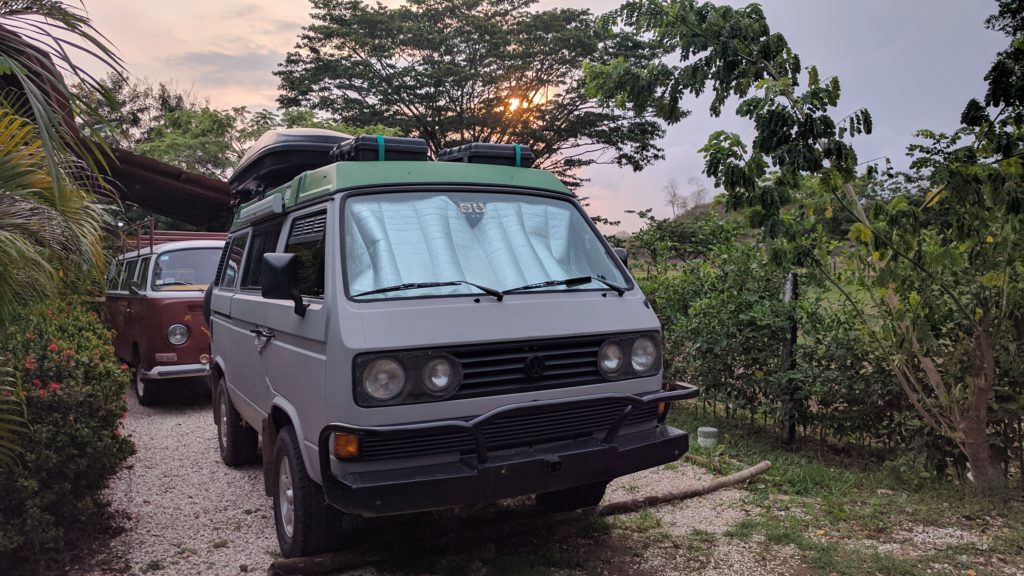 Lastly for now, the rainy season has showed up in a matter of 2 days, but we are happy to be posted up in a place with our own stand alone room and fun people to be around.  The lightning at night has been spectacular and even when its raining, we can still do lots of fun things. Sarah managed to capture an amazing photo during a large flash of lightning while a group of us were watching from a deck. The first photo is a mere moment prior to the second photo. Remember, this was taken during the dark of night. 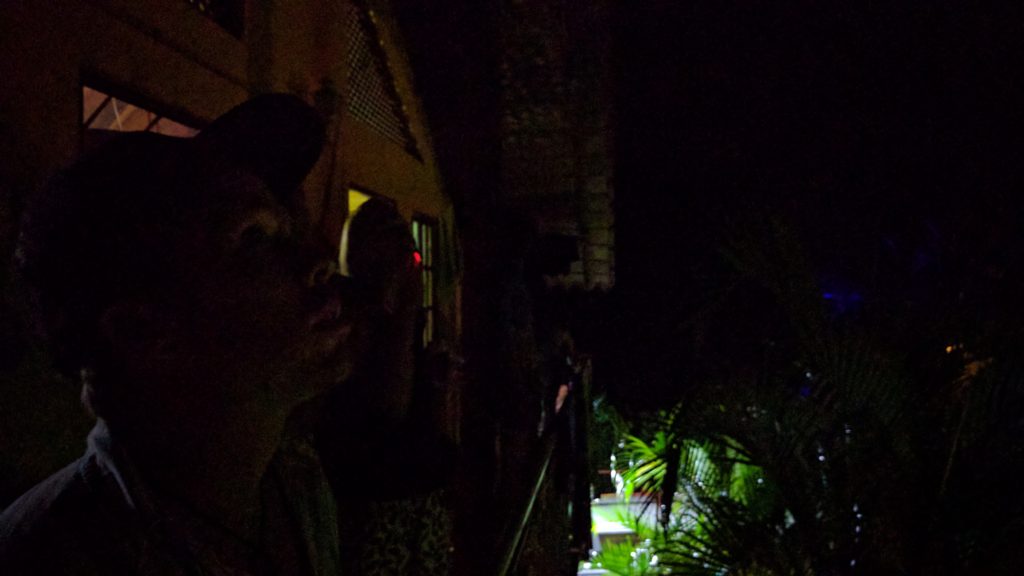 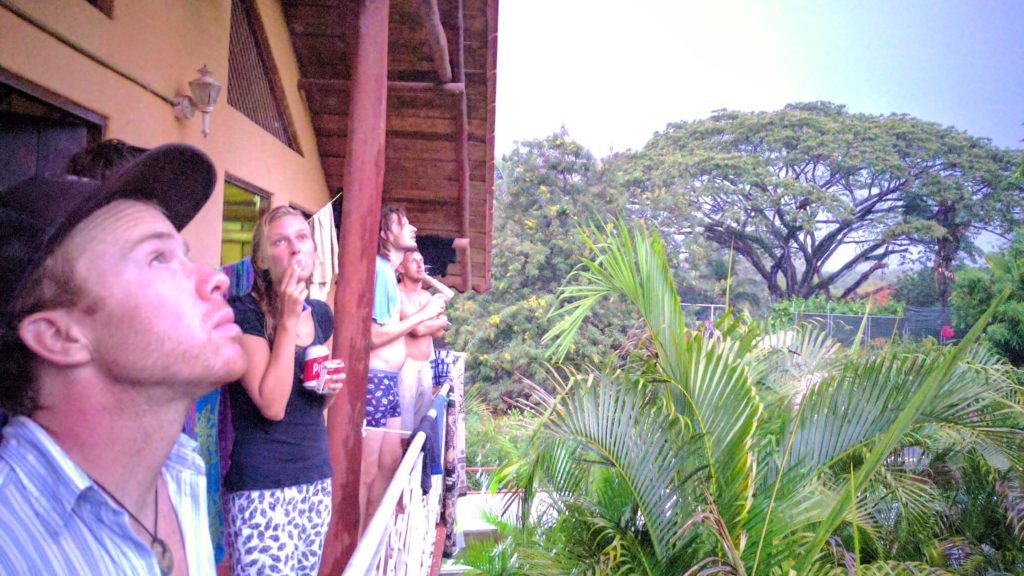 The kindness, beauty and environmentally friendly vibe of Costa Rica has been overwhelmingly special. For now we will continue to enjoy the scenery, people, and living pura vida! 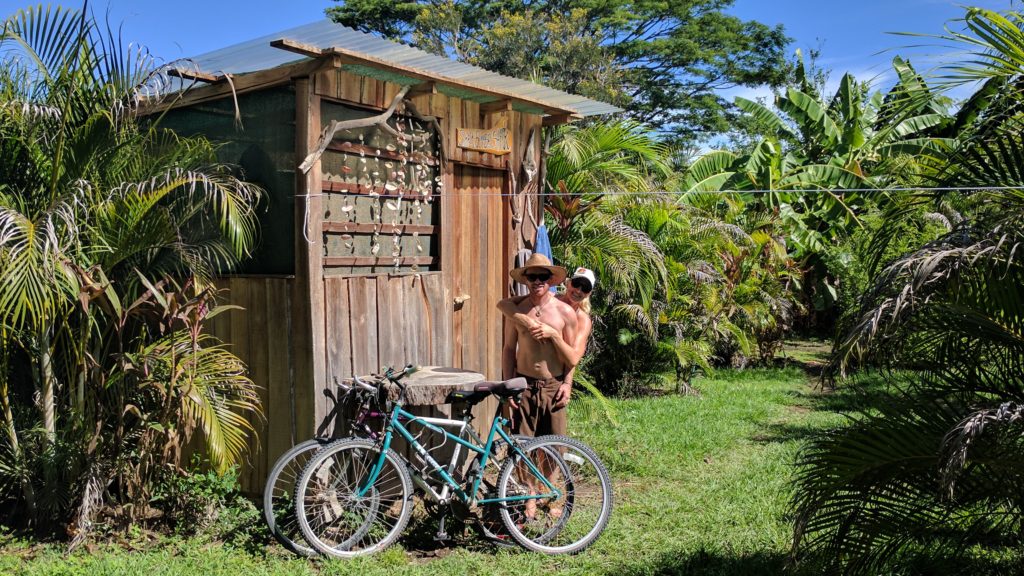