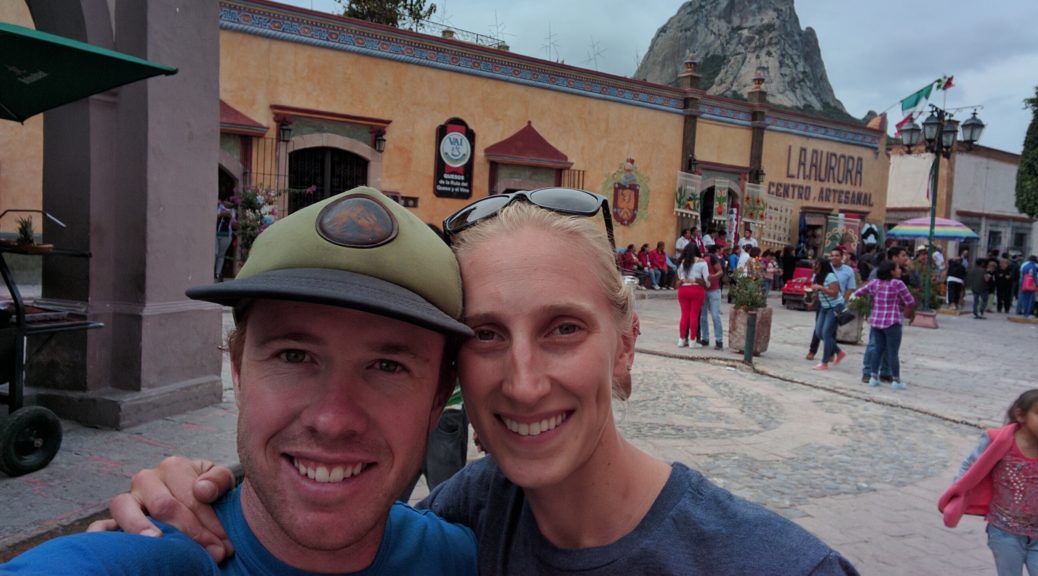 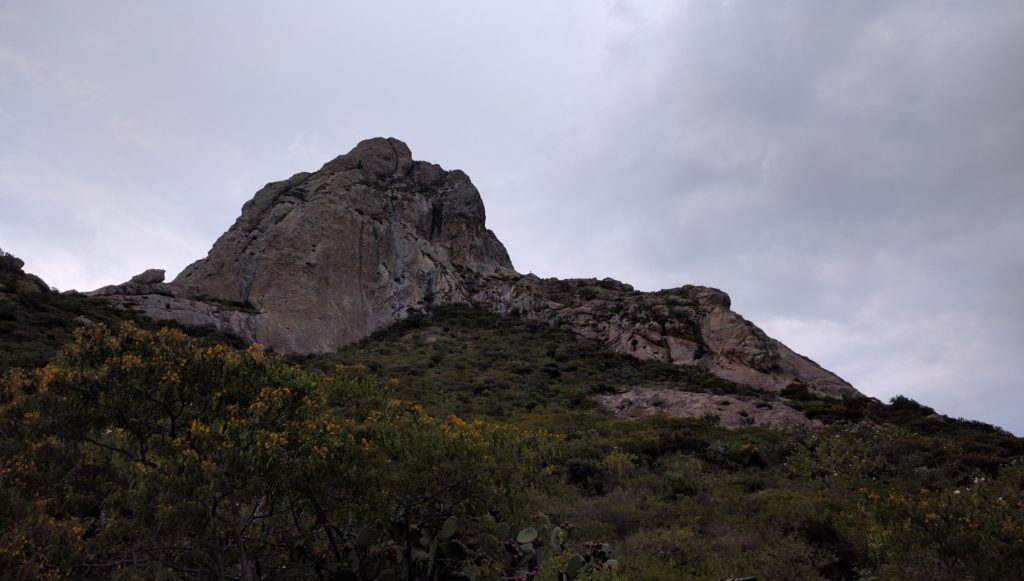 Earlier in the trip while we were climbing in northern Mexico, some locals had made mention of a huge monolith with multi-pitch climbing near the pueblo of Bernal, in the state of Queretaro. Since it was more or less on our way, we knew it would be our next stop. Once we spotted the large monolith (Peña de Bernal) from the highway, we were blown away by the size and were excited to be climbing again. We later found out that it is one of the tallest monoliths in the world. 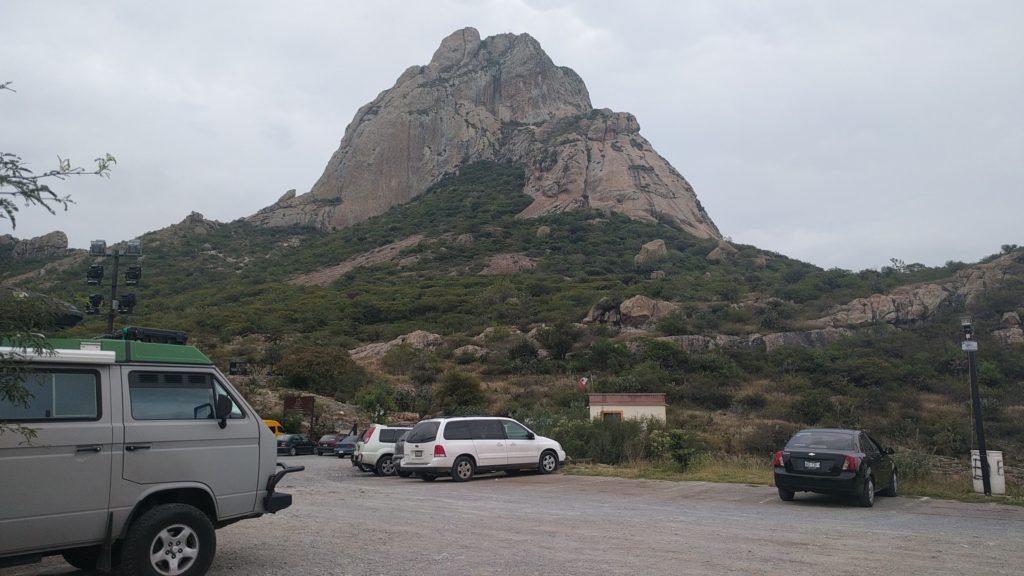 Bernal is close to the relatively large capitol city of Queretaro in the state and draws a lot of tourists.  It is named a ‘pueblo magico’ by the government for the special town and beauty of the area, and is essentially one step away from having a UNESCO designation.  We found a parking spot for 20 pesos that the lot attendant agreed to let us stay at for the night. With little time in the day left to do some climbing, we opted to do a small hike and see the sights. In the main square, there was a water show complete with music and lights and with vendors aplenty and a large colorful light shining on the monolith, we gladly chatted with locals and sampled of the goods. 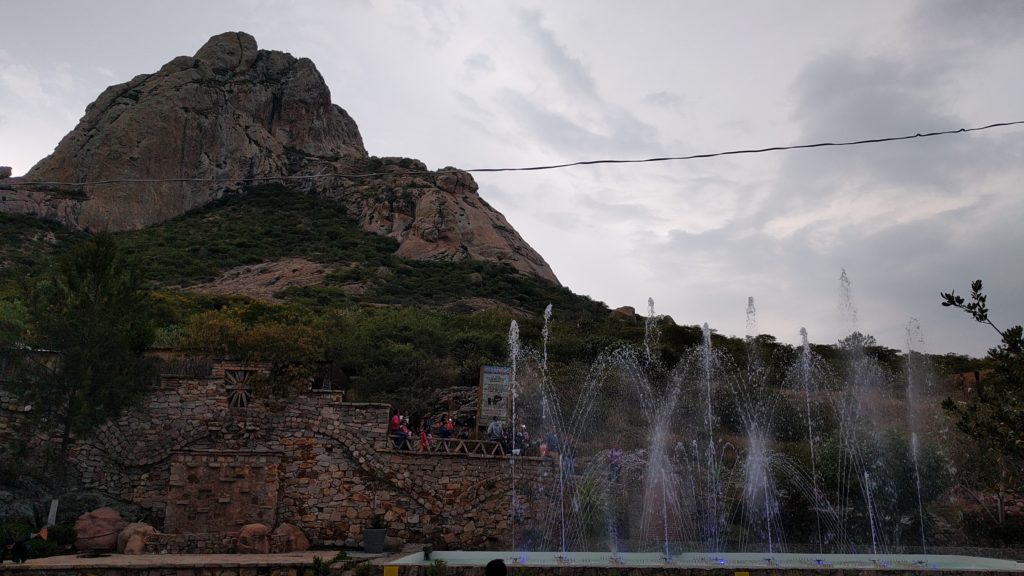 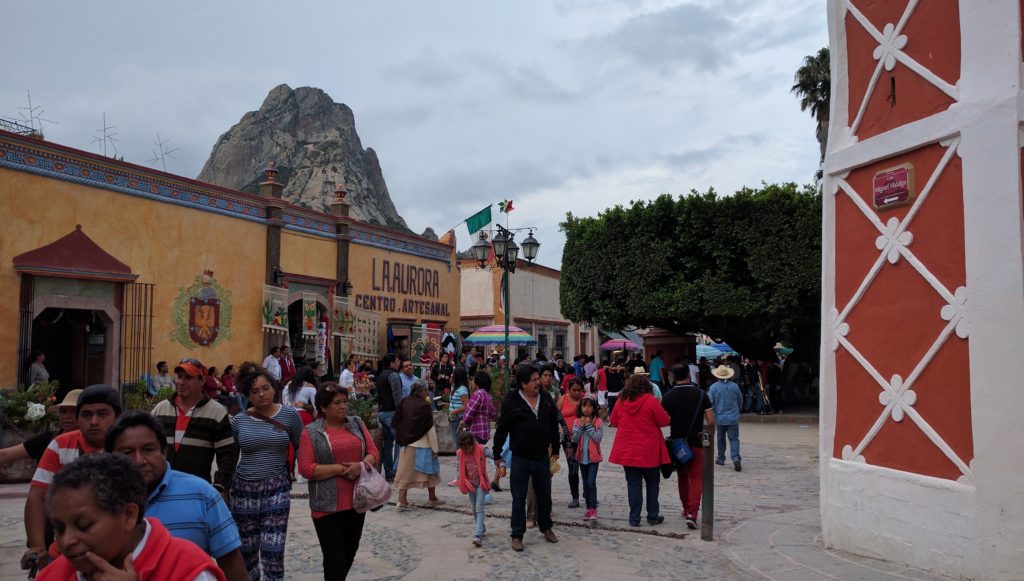 The next morning we were up early to try the classic 5 pitch route right up the prominent face of the rock. Easy yet stellar rock provided a peaceful and quiet outing with no other technical climbers around. Once at the summit, we did encounter some other guided clients who had taken an easier 4th-class route up the backside where ropes were only needed for the last 60 feet. We chatted with the guides and clients atop the monolith and they proceeded to invite us to lunch to further swap climbing tales and try the traditional food and drink of the area. 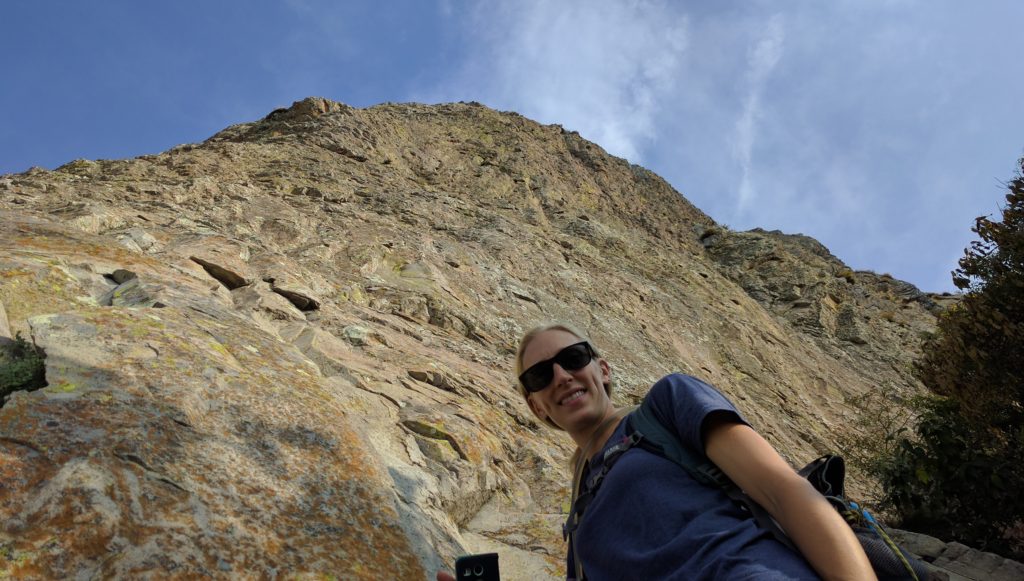 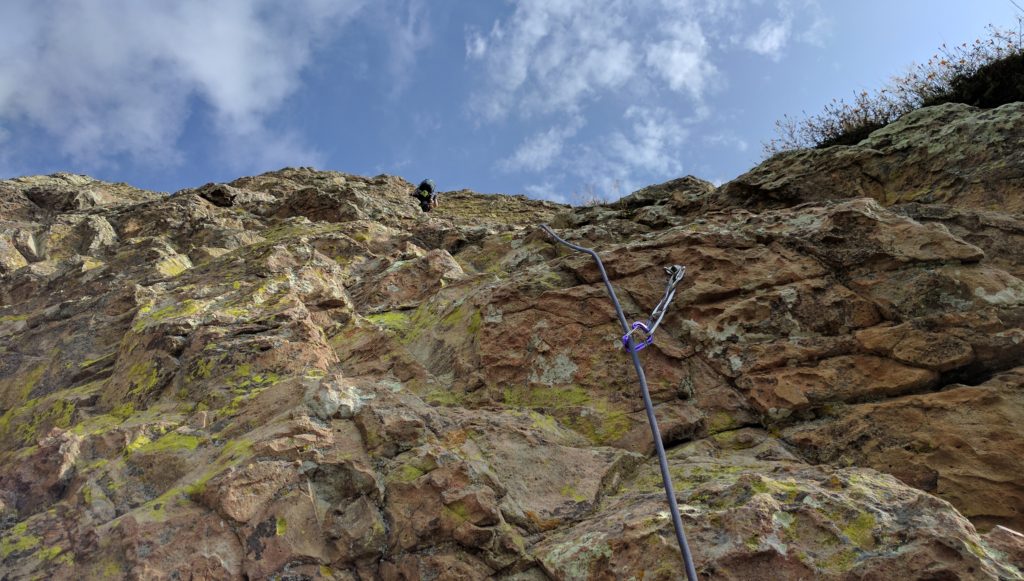 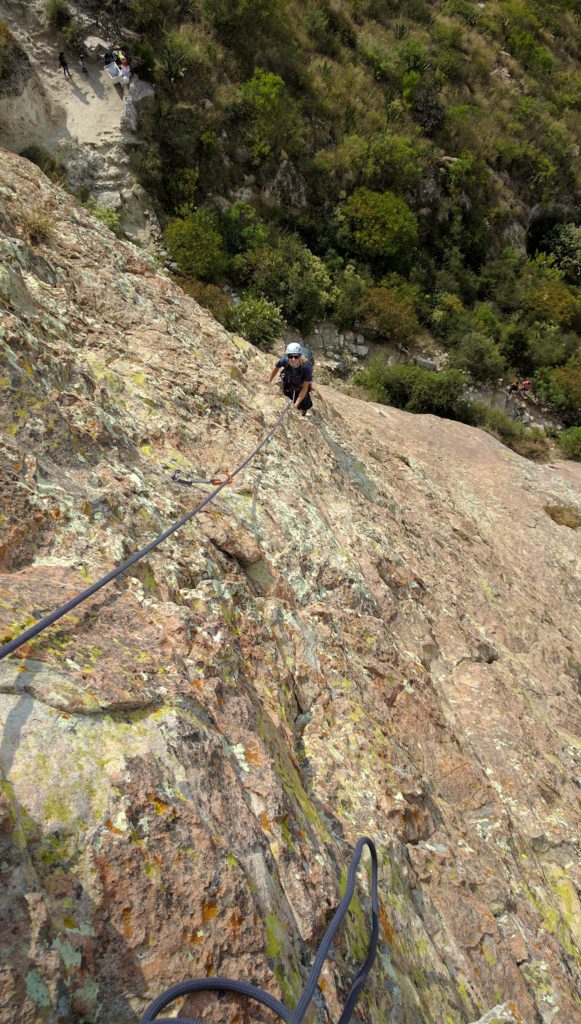 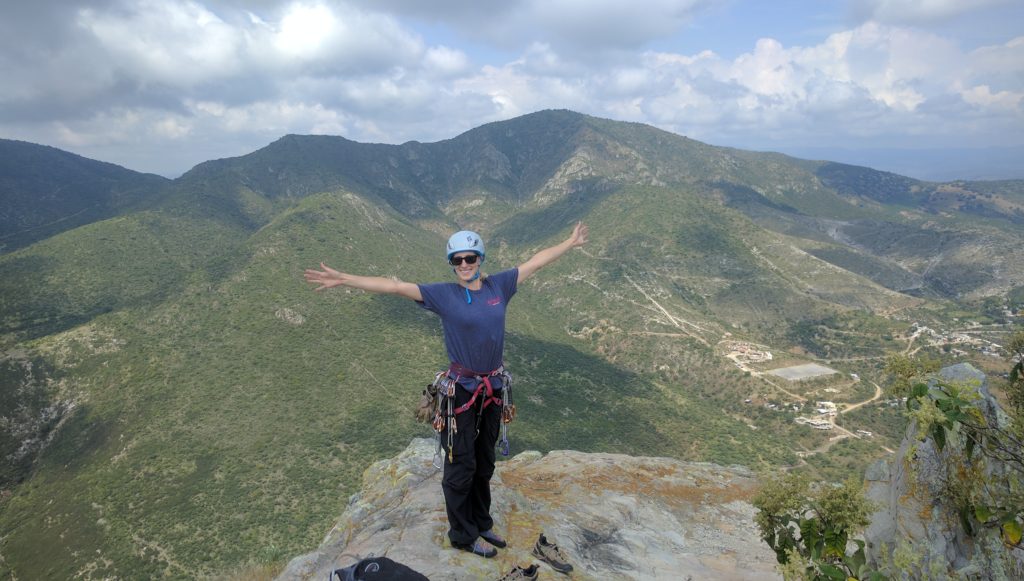 After a couple more harder single-pitch climbs, and with the tourist crowds increasing, we made our way back down to reconvene with the fellow climbers for an amazing lunch. 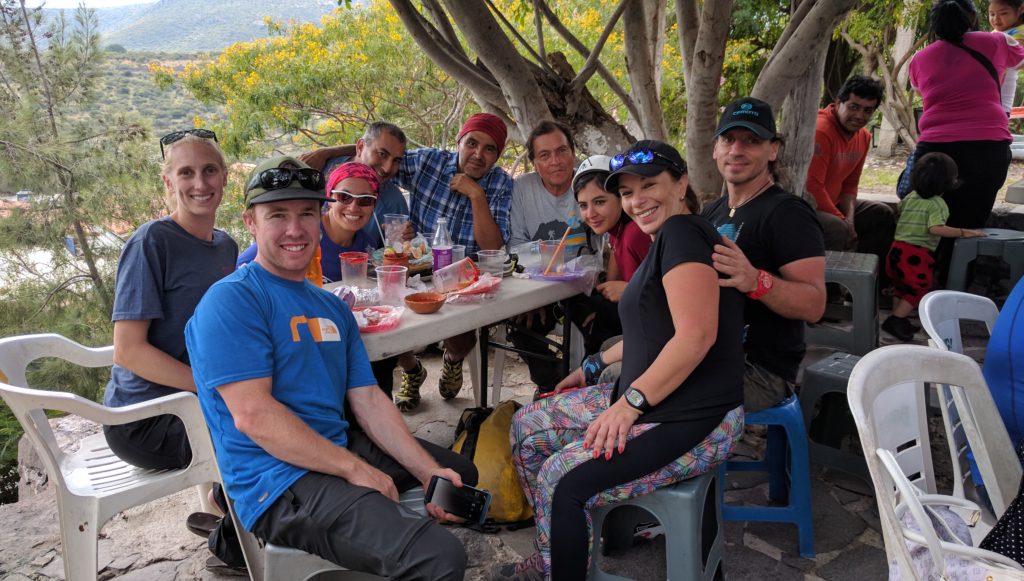 Gorditas and nopales are the staple in this region. Gorditas are basically a thick corn tortilla stuffed with ingredients of your choice and here the corn was blue. Nopales consist of meat and cheese chopped up with cactus flesh and stuffed into a larger cactus and grilled, yet another unforgettable Mexican dish. 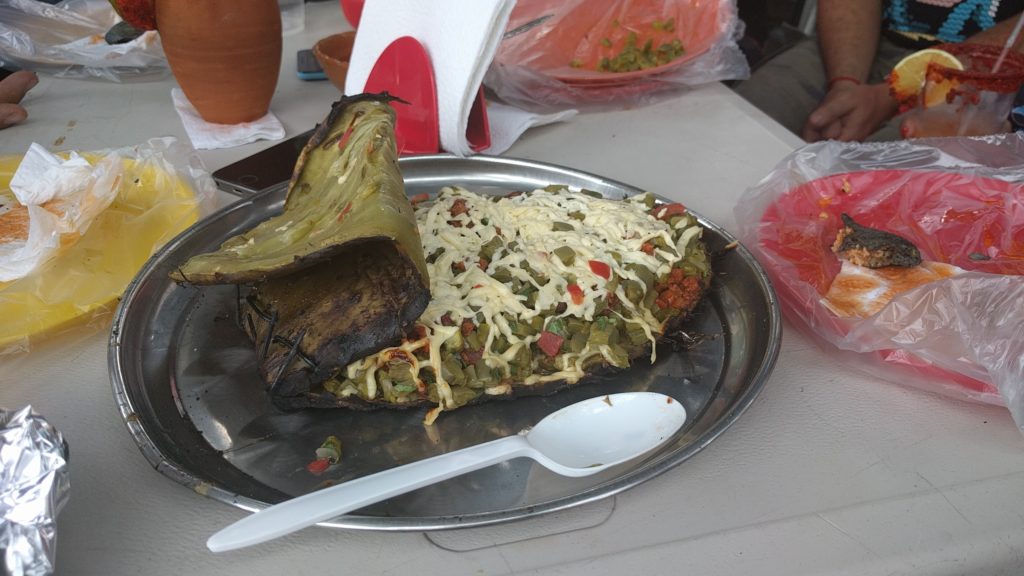 The traditional beverage of the area is known as pulque, which is fermented cactus and very potent in alcohol content. The flavor is not as pleasing as other drinks, so fruit juices and sugars are usually added by most vendors.  It was an interesting flavor for sure, but delicious none the less! 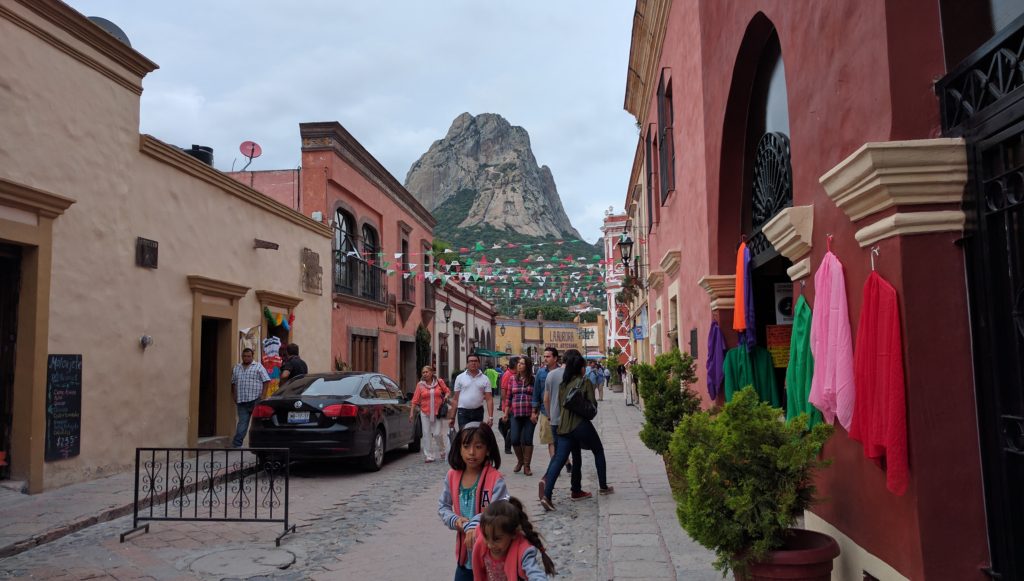 One more night in the pueblo magico and we were headed to the big bad Mexico City. After a lot of discussion, we’d decided there was simply too much of Mexico’s history represented there we could not miss it. So, feeling good about things, we gently made our way to what is known as the world’s biggest city.