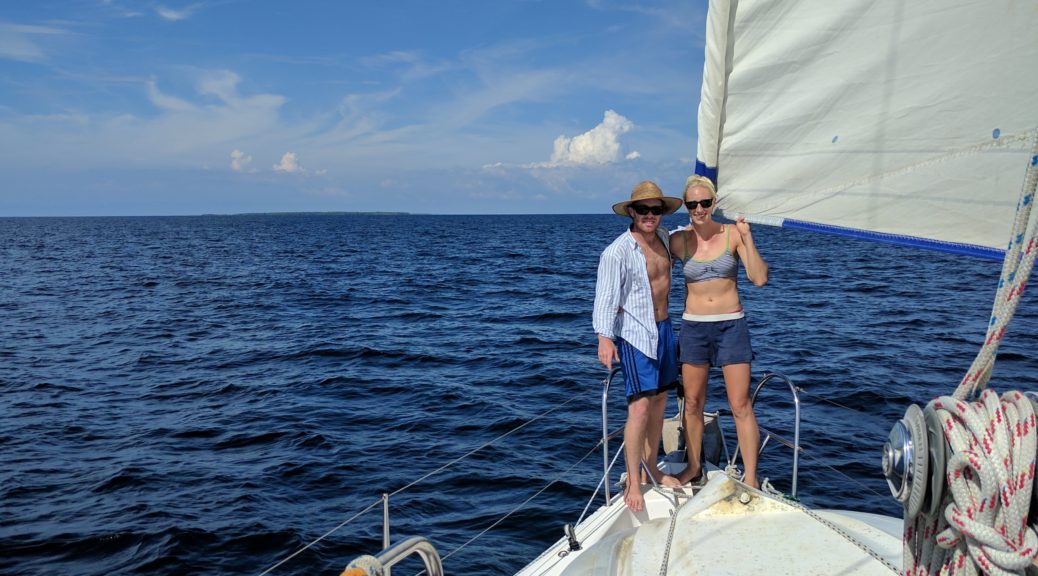 Having spent many months more than planned in Central America, we were finally ready to make the leap and commit to driving through South America.  Admittedly, we’ve had feelings of doubt and homesickness and the many months of heat and humidity hadn’t helped.  We were at a critical decision point, but as you all know from the previous post, we went for it and jumped on the sailboat and kept our compasses pointed south. After all, our initial travel goals revolved around reaching South America, so Colombia, here we come! 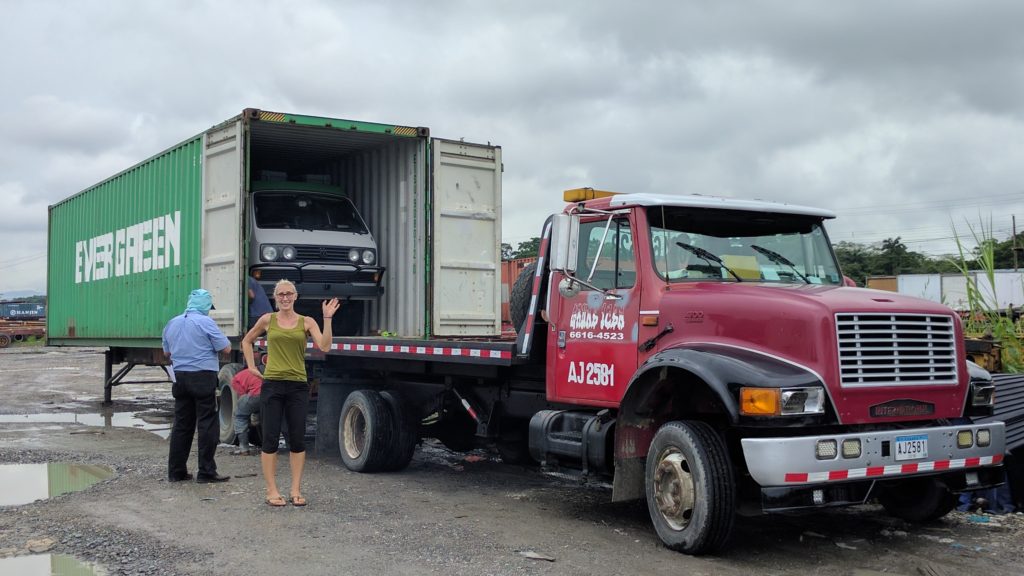 With the van snug as bug in a old musty container, we got ready to jump on a sailboat named ‘Sangria’ with captain Mike (pictured below), a local Colombian who’s had 20+ years of culinary training, most of which occurred in Italy on top of sailing experience since he was young. Our bellies were as excited as we were to voyage into the San Blas Islands between Panama and Colombia where the indigenous Kuna still reside. 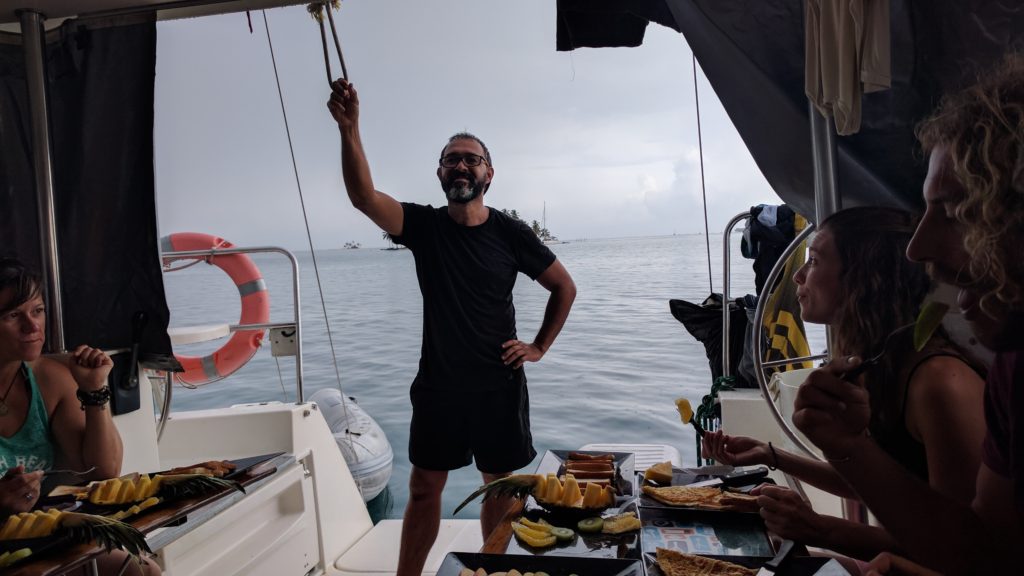 The morning of our departure was a bit delayed, and at the time we didn’t know, but the Sangria was having an electrical problem similar to Koru’s just a few weeks back. After a few hours of waiting for the sailors to arrive in Puerto Lindo, we were invited to kill some time buzzing through mangroves and hanging out on an island while we waited for the Sangria to get prepared. It was a good time to get to know each other before the 5 day journey. 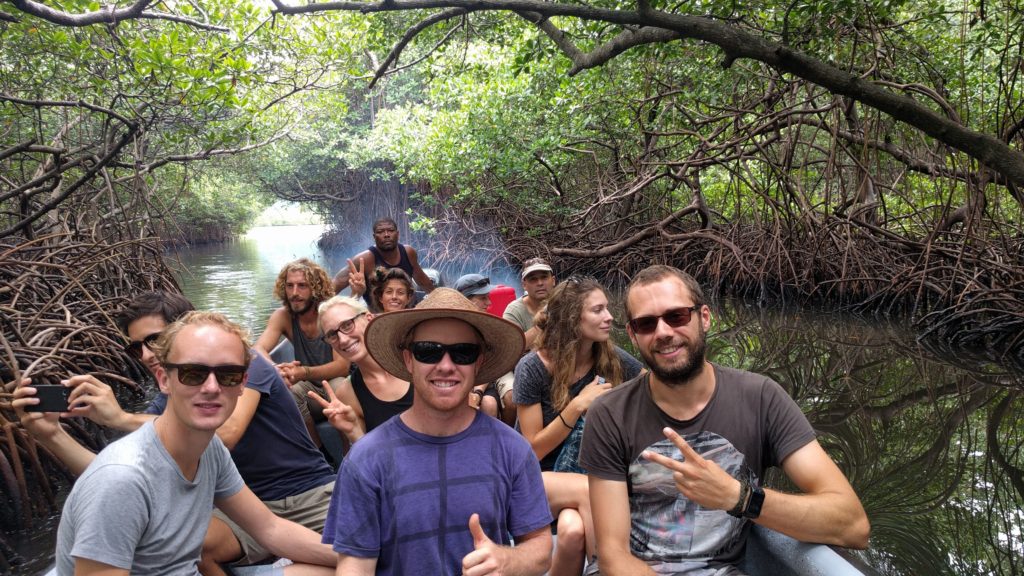 The plan for the first day was to sail through the night and arrive at the first islands by early morning. This meant open ocean almost right away. Unfortunately Sarah fell ill along with most of the other passengers around dinner time making it hard to eat the first of many delicious meals. 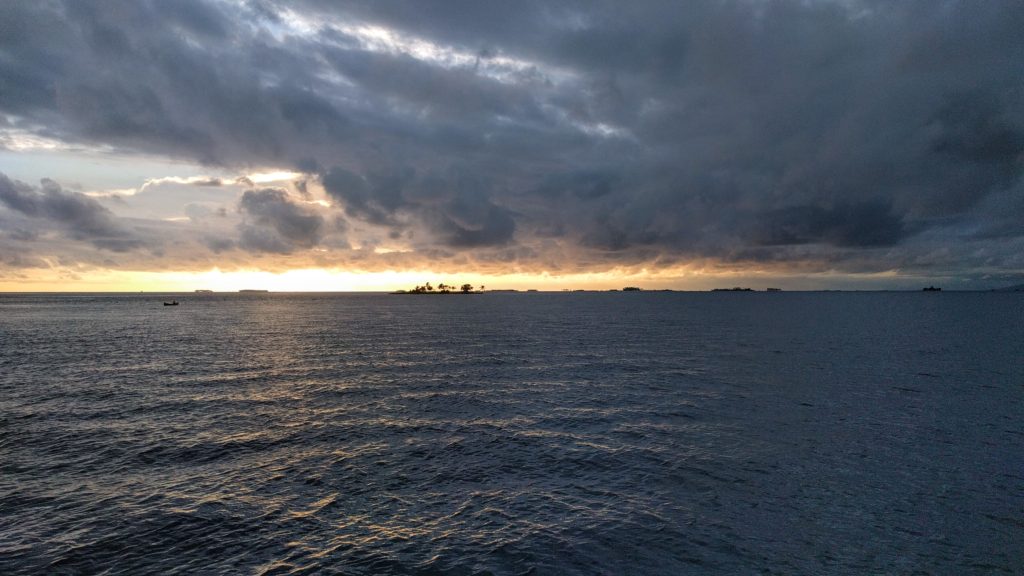 We managed to get some sleep despite rocking vigorously back and forth throughout the night. Our first sight the next morning from the deck of the boat was equally shocking as it was interesting. Some of the islands had every inch developed, with some houses precariously cantilevered out over the ocean.

With music blasting and signs for convenience stores and restaurants within sight, it appeared that life was similar to land dwelling minus the obvious difference of transportation and residence over the water. 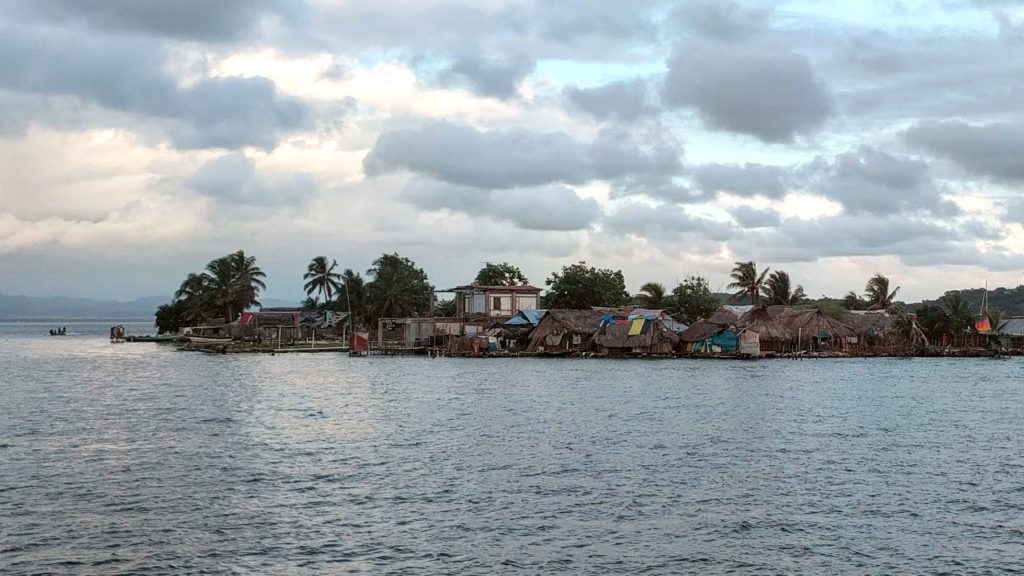 Captain Mike made a delicious breakfast that we enjoyed in the calm waters while getting interesting information and anecdotes about previous trips and the islands. 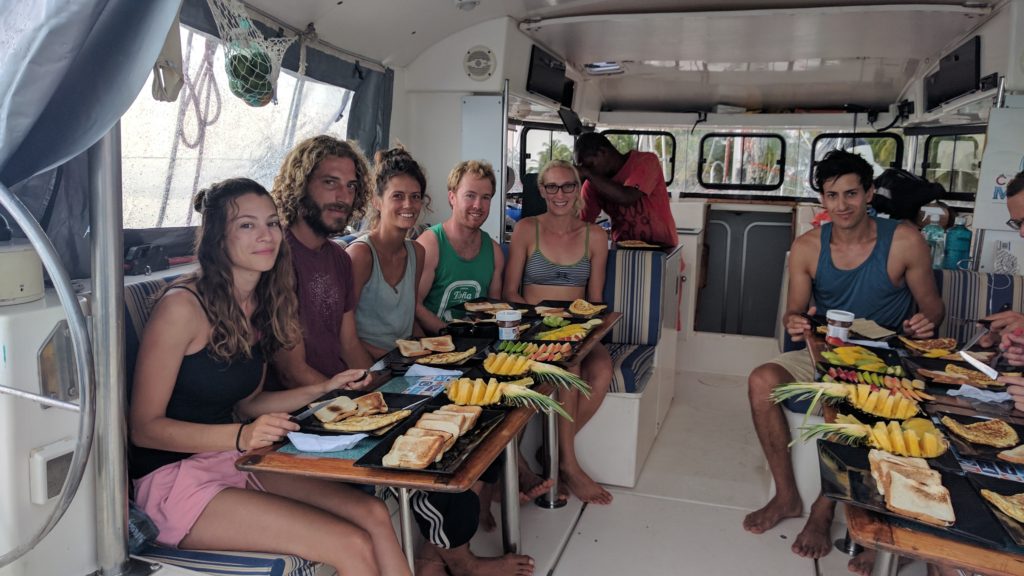 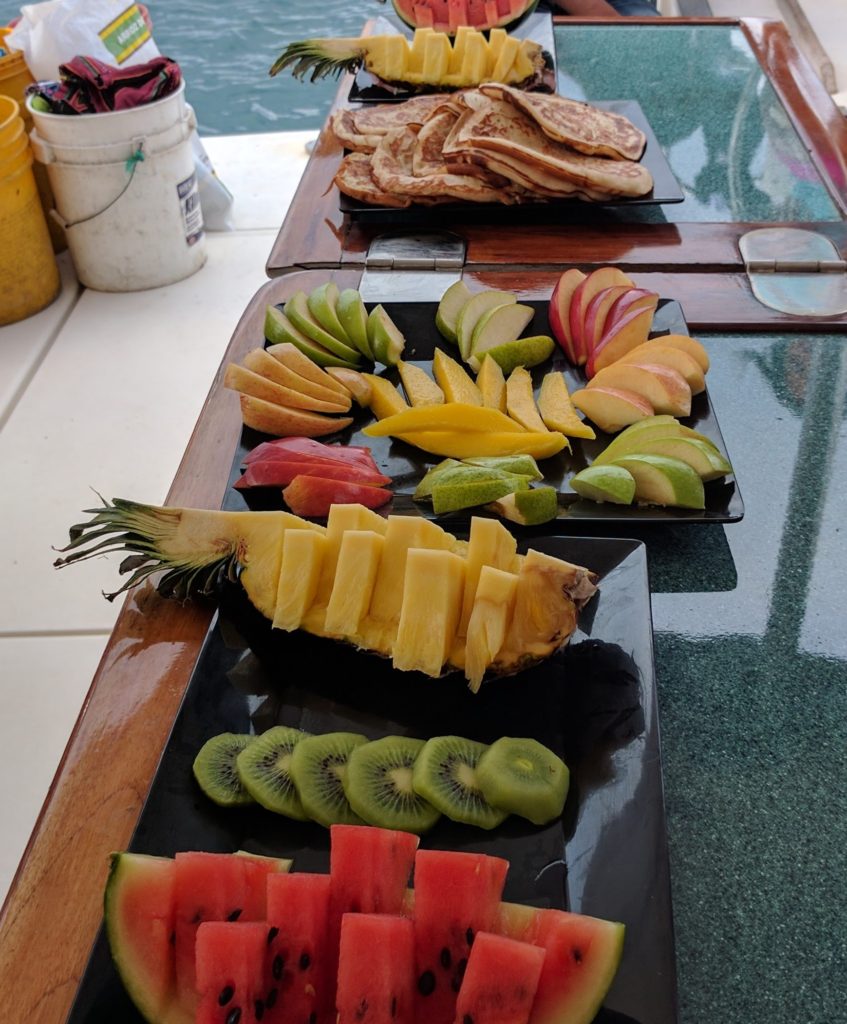 He exclaimed that over the last 10 years, all of the captains have noticed a gradual shrinking of the islands and decline in reef health. Whether you believe in global climate change or human influenced climate change, major shifts are happening here and the livelihood of the Kuna are in serious danger. We’ve never witnessed an example of this so up close and personal in our lives. 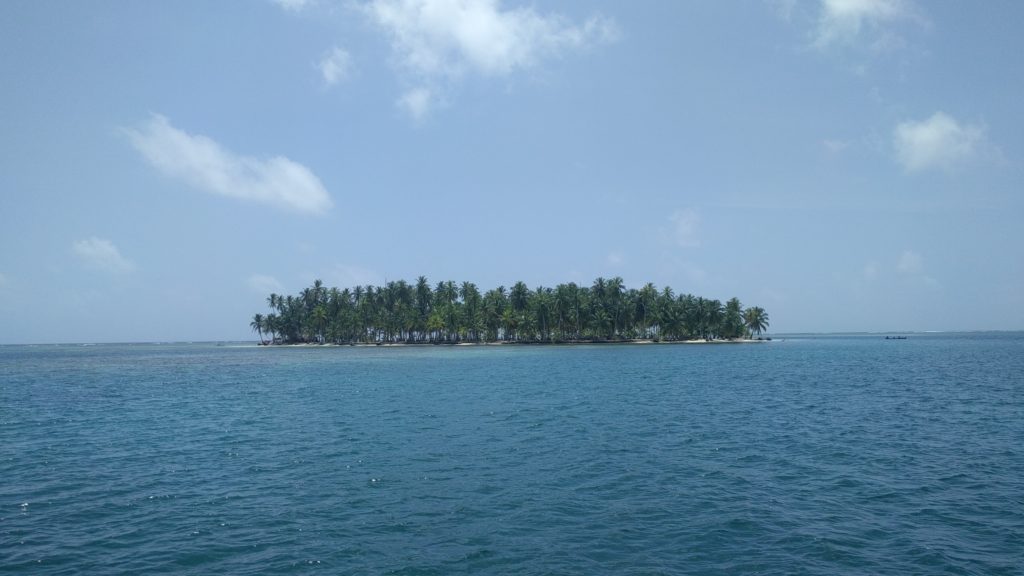 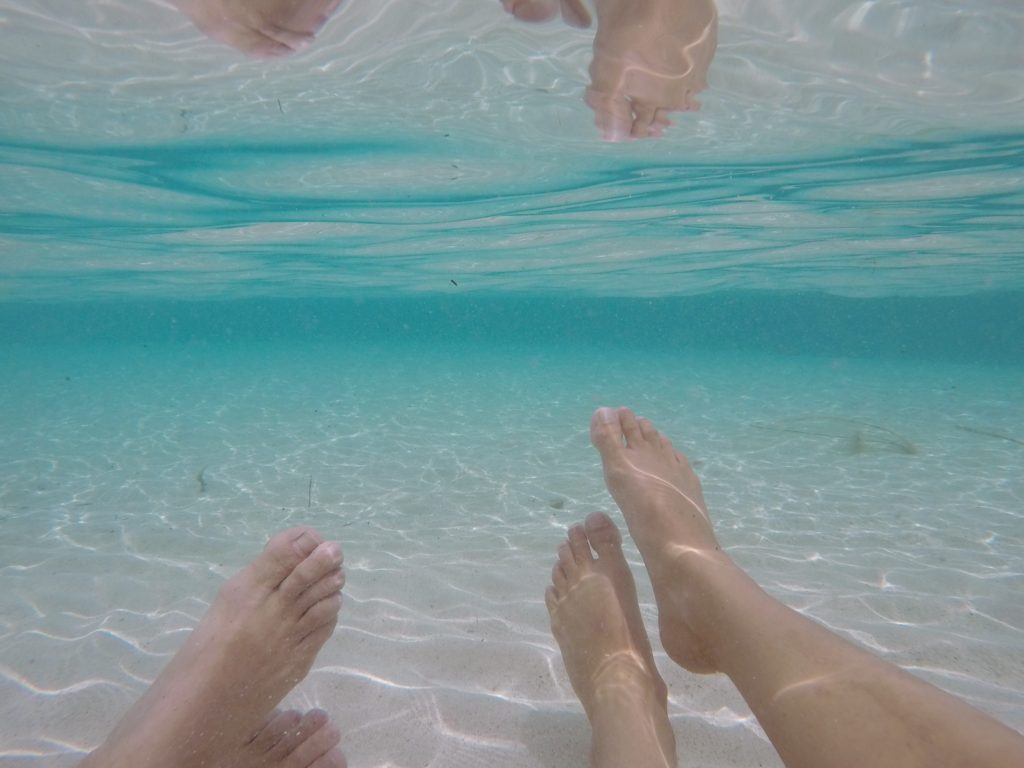 The next days consisted of slow progress through the calm waters of the San Blas islands with various stops at some islands both inhabited and empty.  The iconic sandy island with a few palm trees were all over this area, and many of the story book depictions of deserted islands could have easily originated from the San Blas. 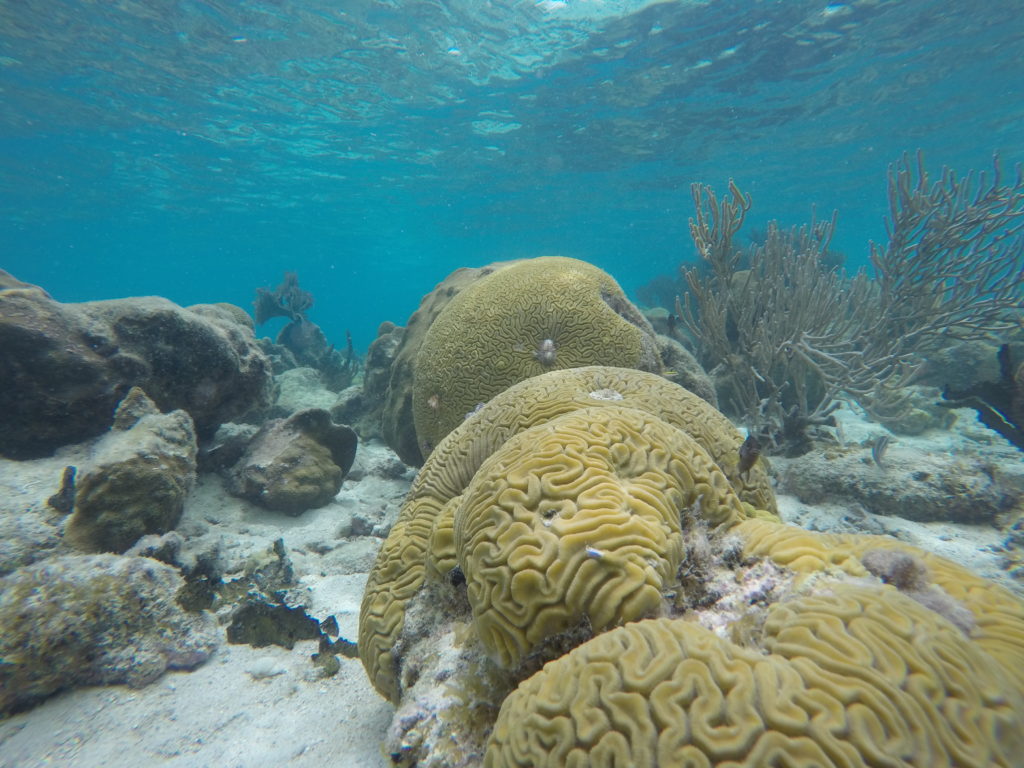 The reef systems were also very impressive as well as dangerous for boat navigation.  We witnessed several large boats grounded and abandoned on the reefs. It was obvious that only skilled captains could navigate the small sliver channels to maneuver through the islands.

The diversity of sights in this area were impressive. From modern sail boats navigating the islands to big ships grounded on reefs at the hands of inexperienced captains, and with local Kuna’s effortlessly navigating their hand made canoes around the area, there were no boring moments. 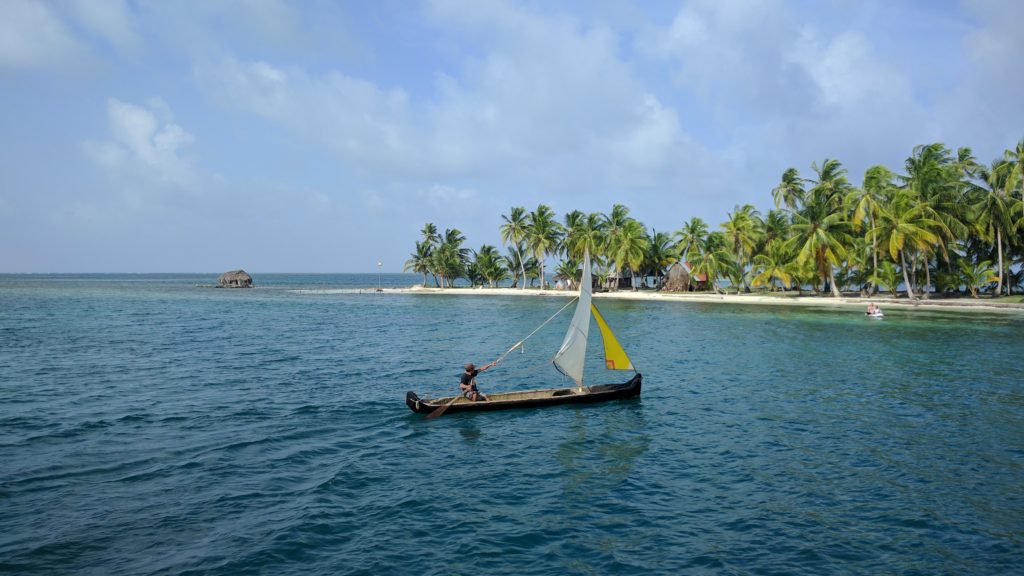 At one of the best stops, we managed to enjoy some great snorkeling while captain Mike built a fire and cooked a plethora of delicious meats.  A local family resided on this island and we supported them by buying one of their traditional Mola’s, which are stitched fabric panels they use for their clothing and sell for decorations. 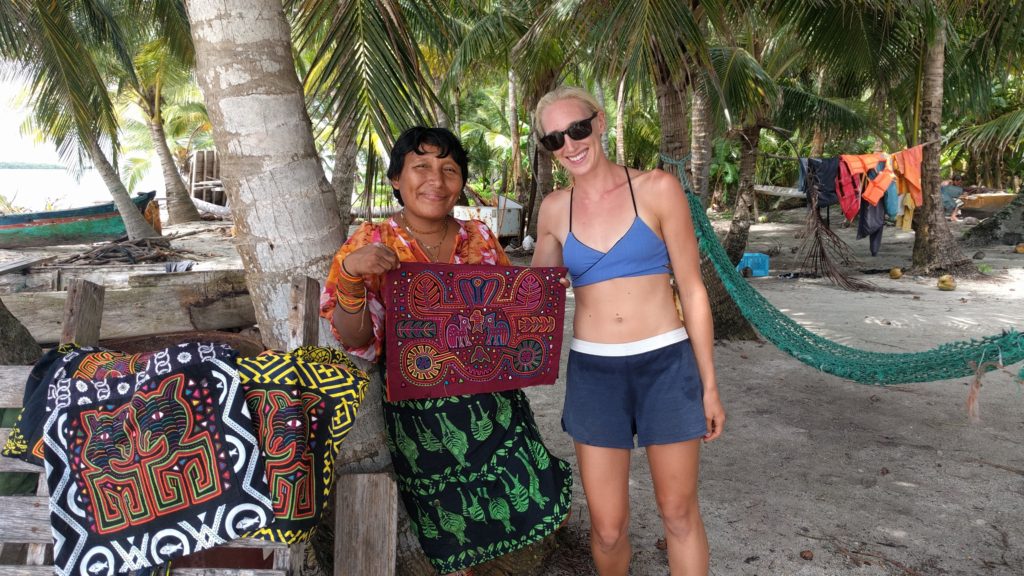 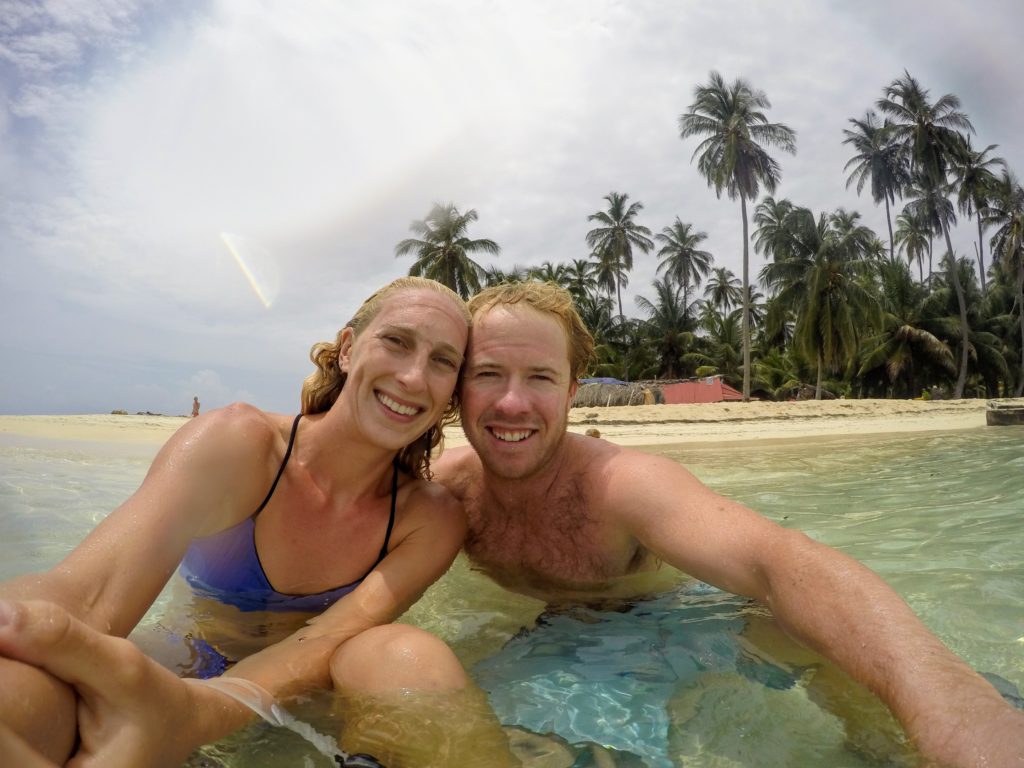 Lounging in the shallow crystal clear water on soft white sand while we watched our sail boat casually bobbing back and forth after our snorkel was an image and moment we will never forget.  Eating our fill of the best lunch of the trip along with some local beers washed away any of the doubt or stress we’d experienced a few days prior. 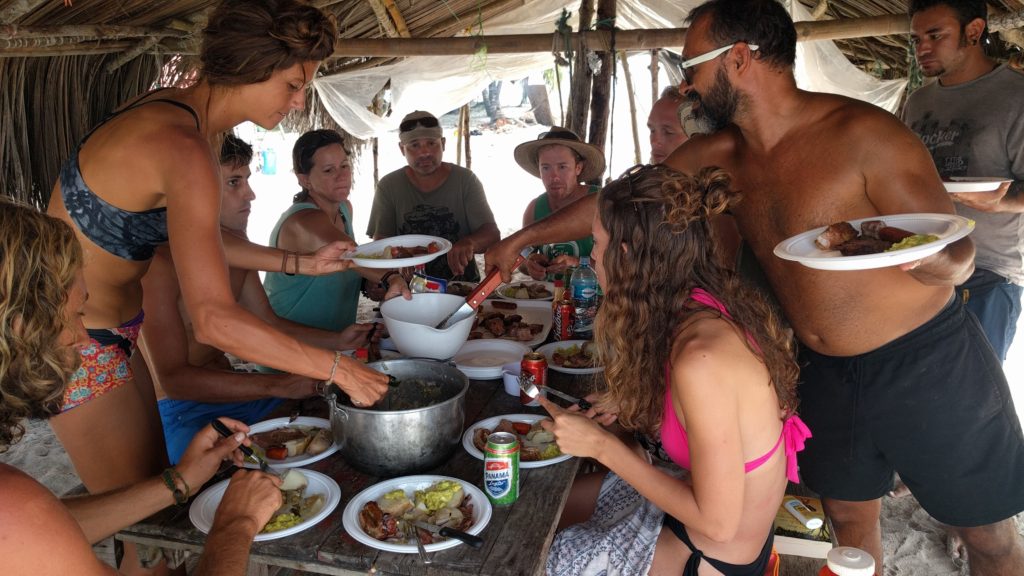 We were at ease with our travel decisions and excited to have a break from the van while experiencing the beauty of sailing the open seas. 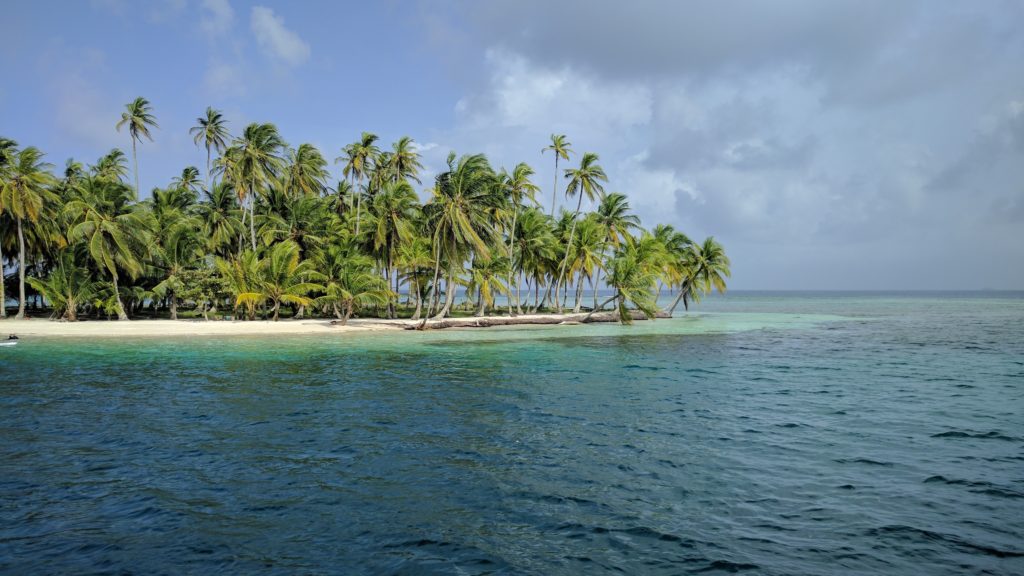 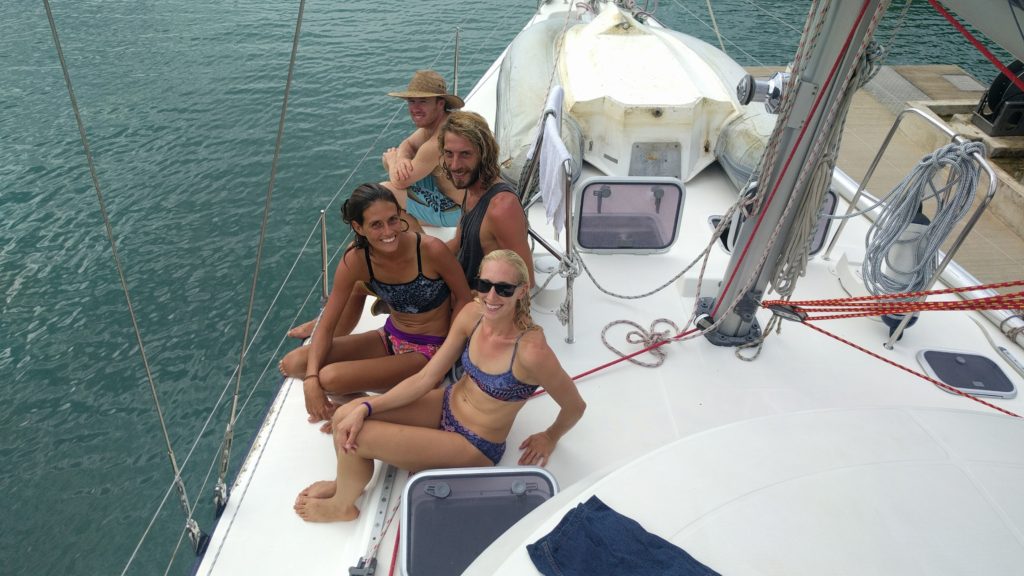 The Kuna are very peaceful and happy people.  Below is a photo of their two flags. The first looks like something we all don’t like to see (swastika), but in fact represents peace and they have been flying it for centuries. The second represents the Kuna nation, as they have their own government and sovereignty from Panama. 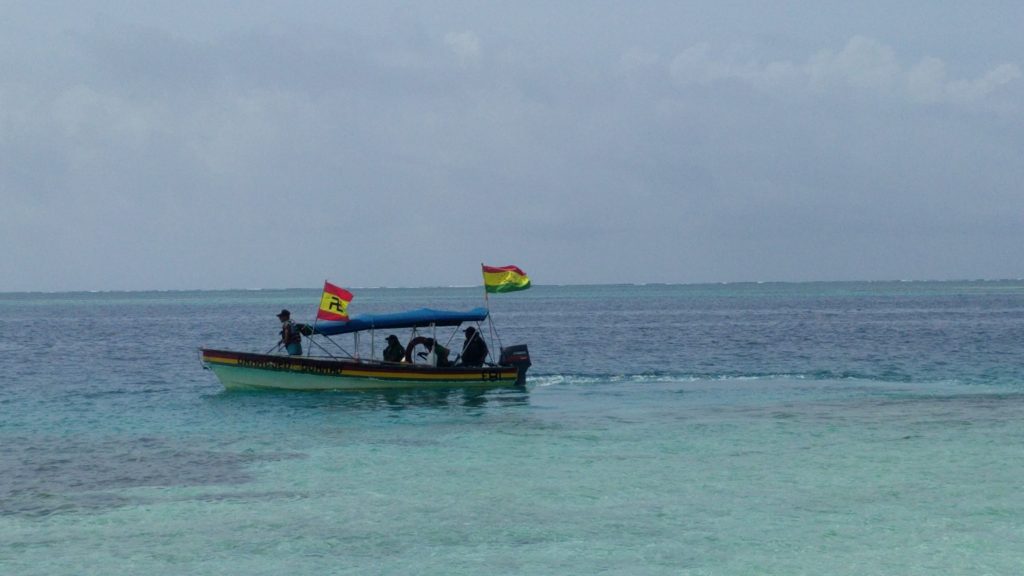 During our time among a more populated group of islands, some local Kuna sidled up next to the Sangria with one of their hand-made canoes full of freshly caught lobster that were very much still alive. Our boat bought 10 large lobsters at around $3 a piece, one for each person on board. Hard to beat this freshness. 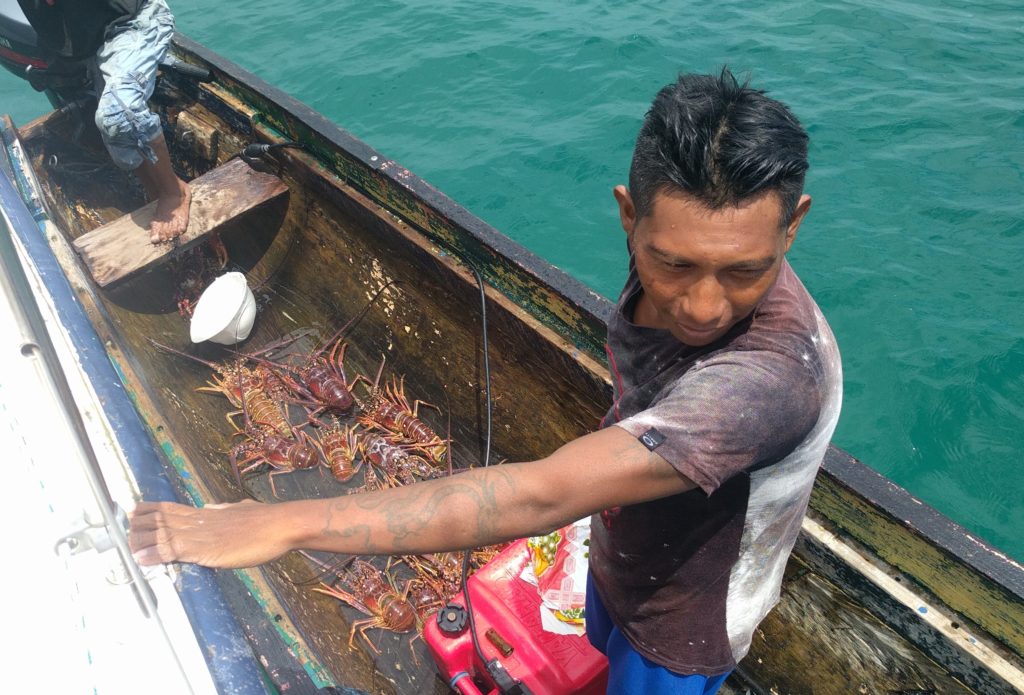 Every day the Kuna would simply dawn a snorkel mask and free dive into the rugged reefs to grab the lobsters by hand.  The number of sailing tours through the area enabled consistent lobster sales, thus supporting and helping to prolong their seafood based culture. Sarah was very excited about the lobsters and even wanted to keep one as a pet, but Koru wouldn’t have approved. 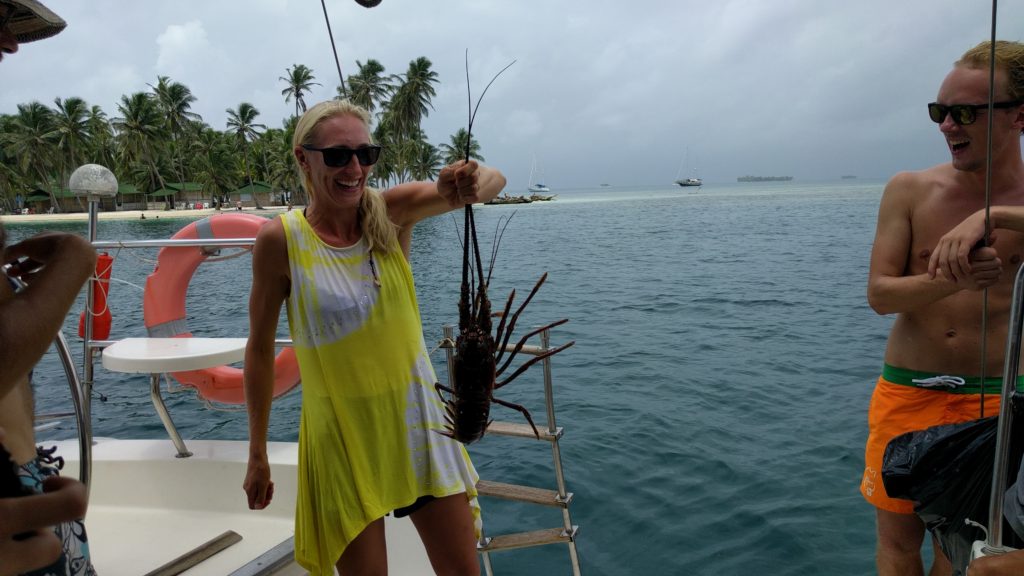 We later watched how Captain Mike effortlessly prepared one of the best meals we’ve ever had. Accompanied with lentils, coconut rice, and a nice wine; we were in culinary heaven. 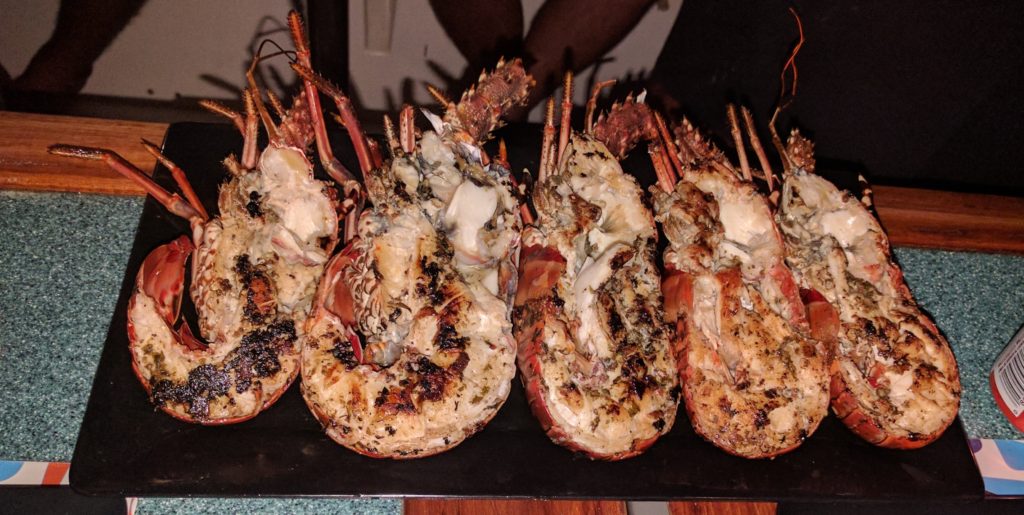 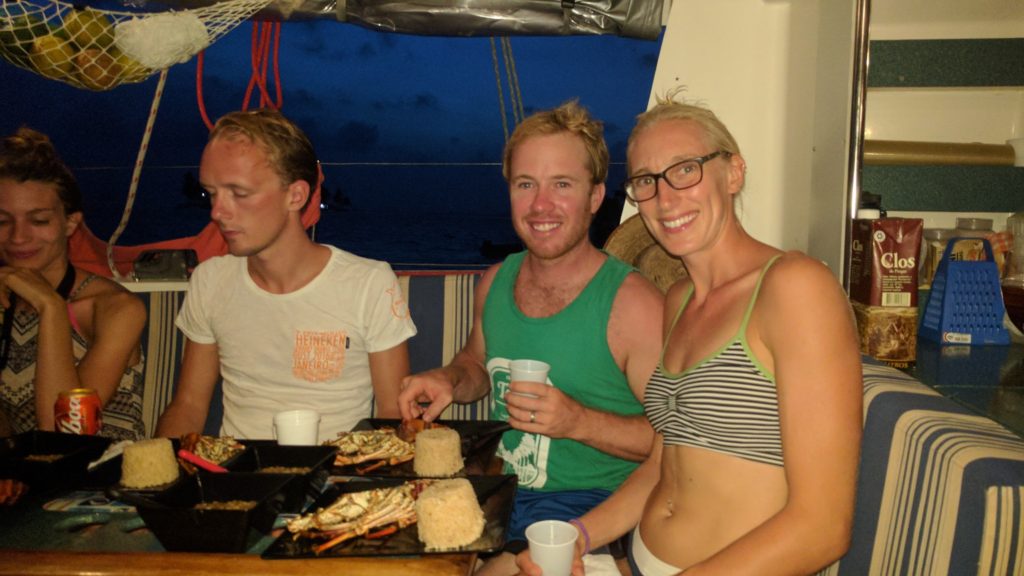 The days seemed to effortlessly slip by and we were fortunate enough to have good weather with rain for only part of one day. We even had the pleasure of dolphins visiting the sail boat. Twice, a large pod surrounded us displaying their superior swimming abilities and playful nature. 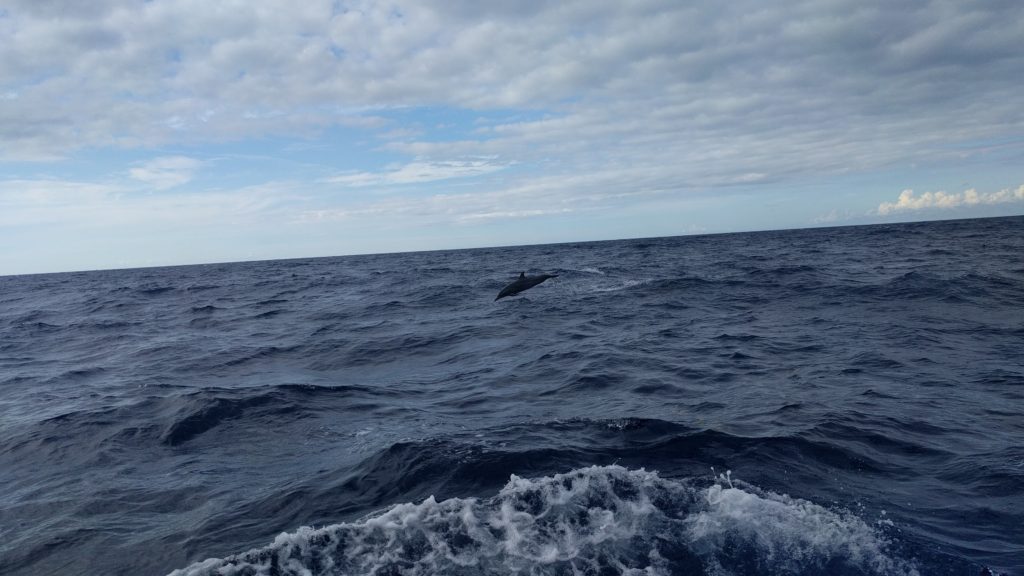 After relaxing for most of a day, we sailed at night and all noticed that bio luminescent algae were all around us, and the water disturbed by the boat lit up into vibrant greens and blues. The dolphins showed up again, but instead of seeing them as an animal, all we saw were vibrant streaks of green and blue darting through the water. These images were nothing short of pure magic. As we left the islands on the 4th day, a perfect opportunity to fish from the boat presented itself. Matt retrieved his hand line he had bought in Mexico and trolled with a Rapala. After about an hour of patient waiting, he managed to haul in a Mackerel. 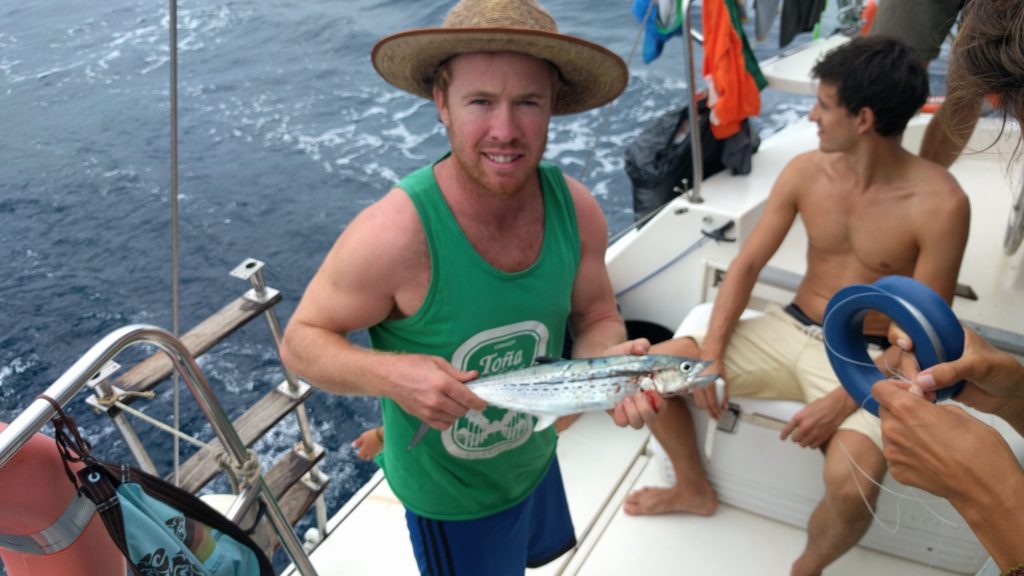 That day captain Mike had bought some red snapper from the Kuna with plans of a fresh fish dinner on the open water. While everyone ate the snapper, we had the pleasure of eating Mackerel that night. Mmmm Mmmm! 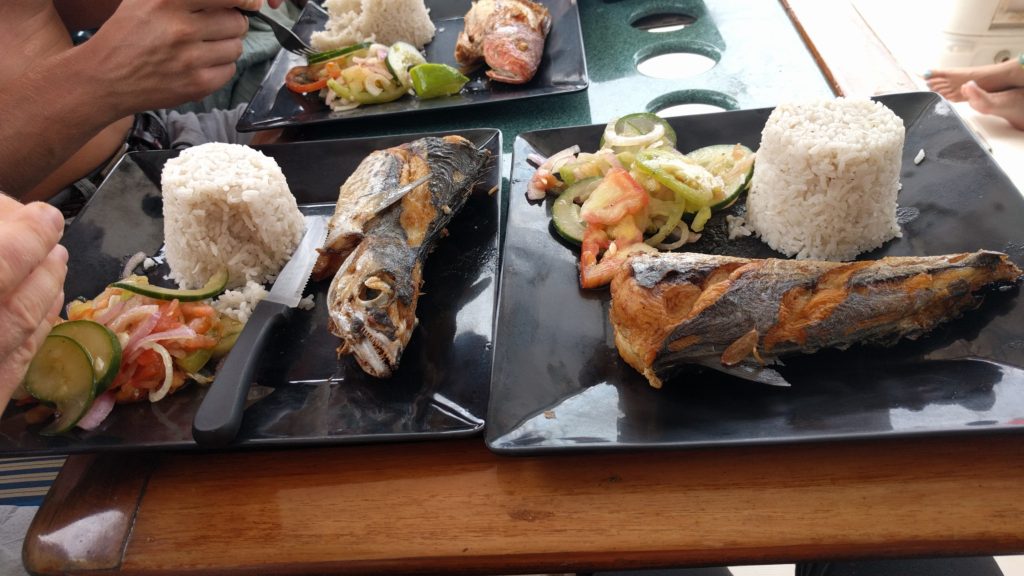 The final stretch of sailing again was over the open ocean, with rough seas. However, everyone had become accustomed to the rocking back and forth, so no one got sick. We approached Cartagena, Colombia bright and early on the final morning with a striking sunrise to greet us. 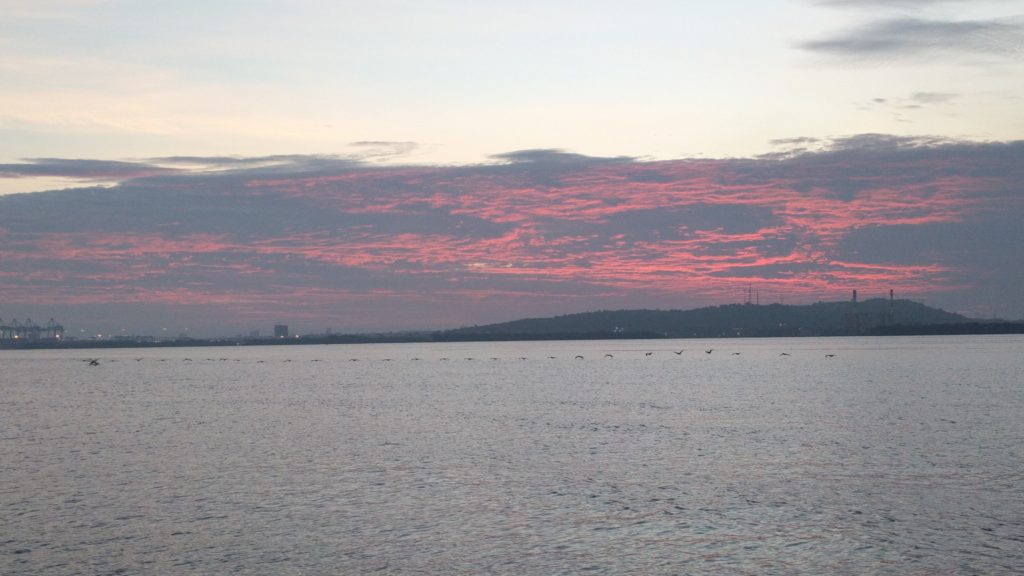 With views of the breathtaking port city, coffees in hand, we reminisced about our time sailing while also discussing our future with the van again.

We thoroughly enjoyed our peaceful and slow voyage through the bay as we slowly approached the city.  We wouldn’t be able to obtain Koru for at least two more days, so our plan was to pay for a hostel with our friends Tim and Andrea while we waited until we could bust a Kruise once again. 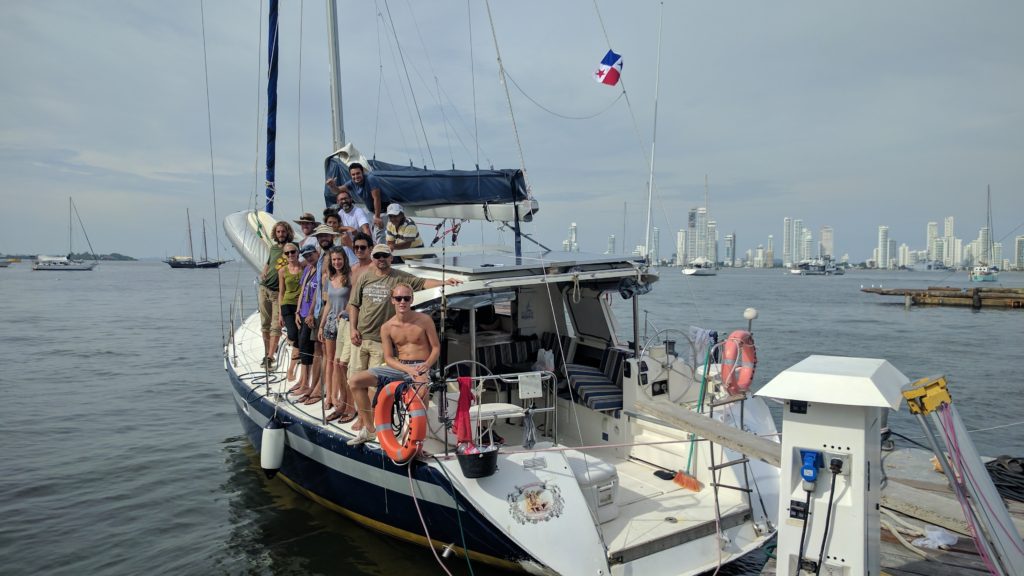 5 thoughts on “Sailing into South America”