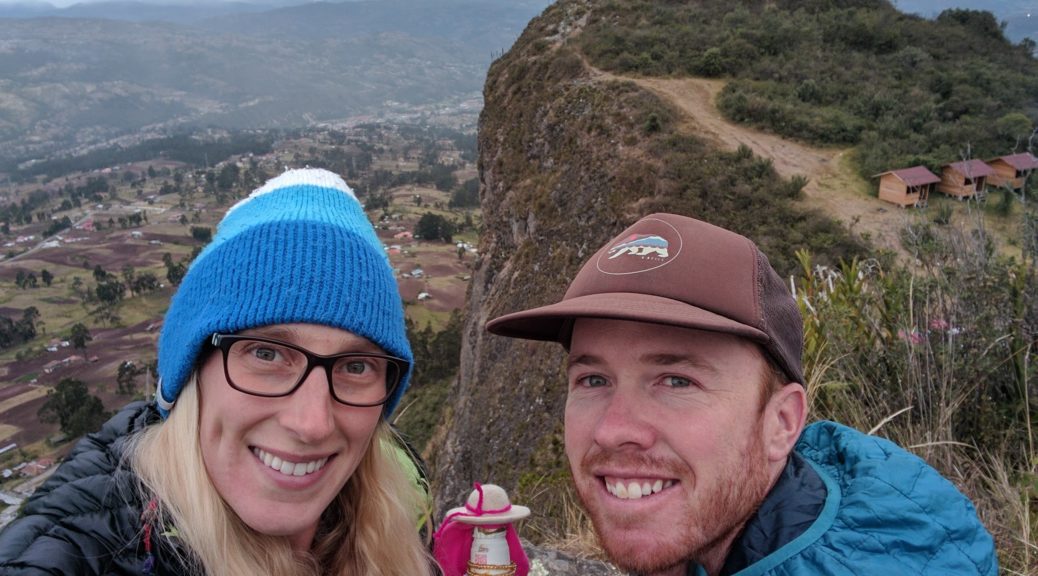 After experiencing a great stretch of coastline in Ecuador, we were ready to head back up into the mountains to visit the famous city of Cuenca and the surrounding areas. Our route towards the city brought us through Parque Nacional Cajas, which stunned us with it’s beauty and high elevation (12,900ft) causing us to immediately retrieve the cold-weather clothes again (which we love!).

We embarked on a quick hike to a nice view point and then descended down into the valley that is home to Cuenca. It is considered the most European city in Ecuador due to its colonial architecture resembling many cities in Spain. It’s downtown is a UNESCO world heritage site due to the many historical buildings and it was beautiful. 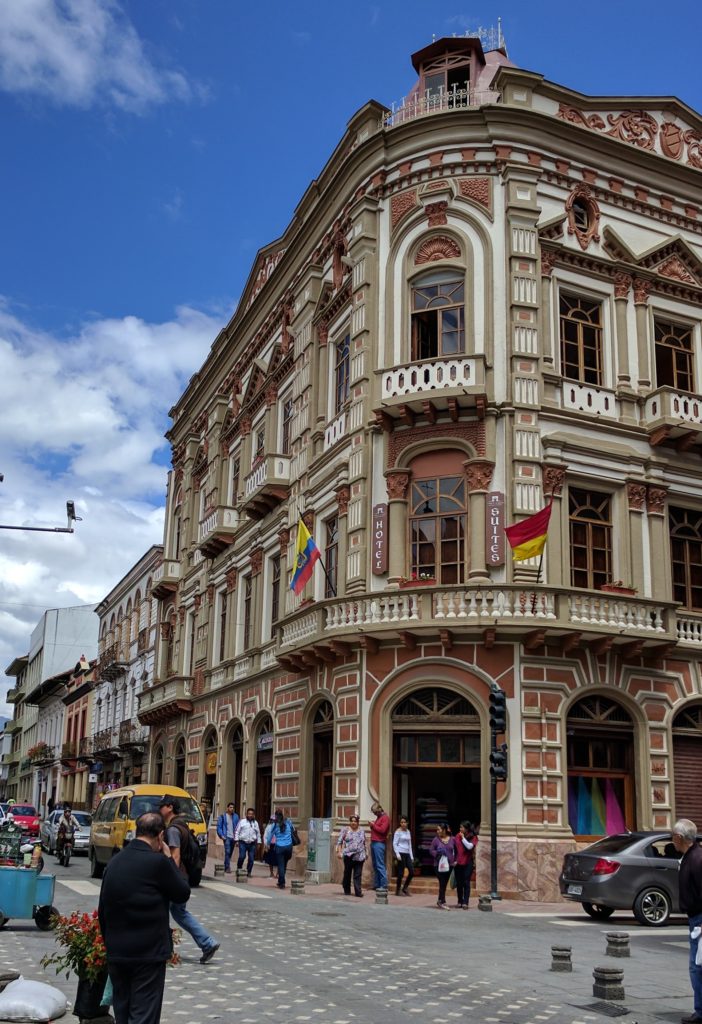 There are only a few pre-colonial sites remaining in Cuenca due to the nearly complete destruction brought by the Spanish in the 16th century. Cuenca was considered the most important city during pre-colonial times after Cusco in Peru, but due to it’s relatively easy location to find, the Spanish wasted no time and leveled nearly the entire city before rebuilding it. So naturally we went out looking for a history lesson and had a look at the old ruins with great vantage points over the city. 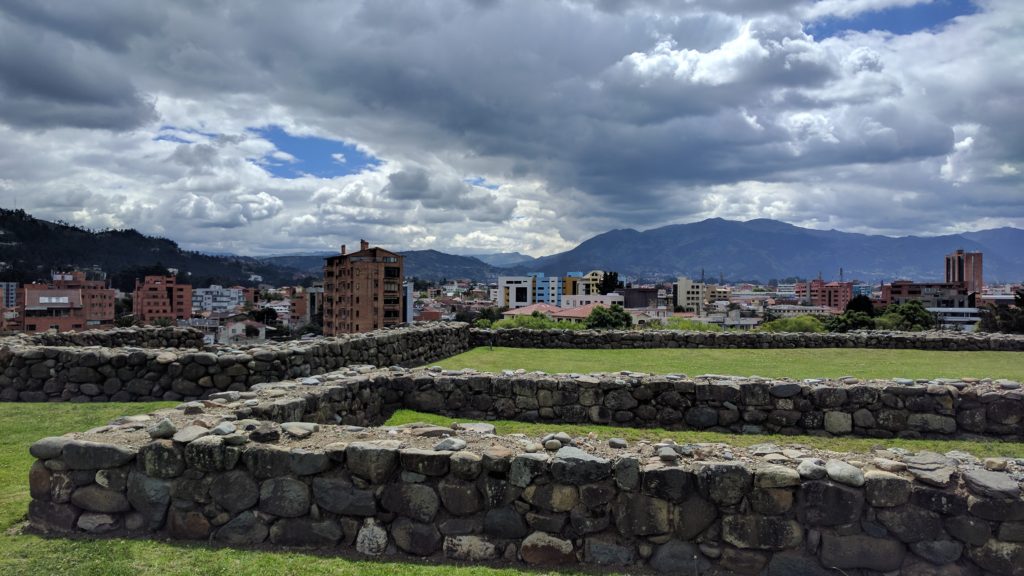 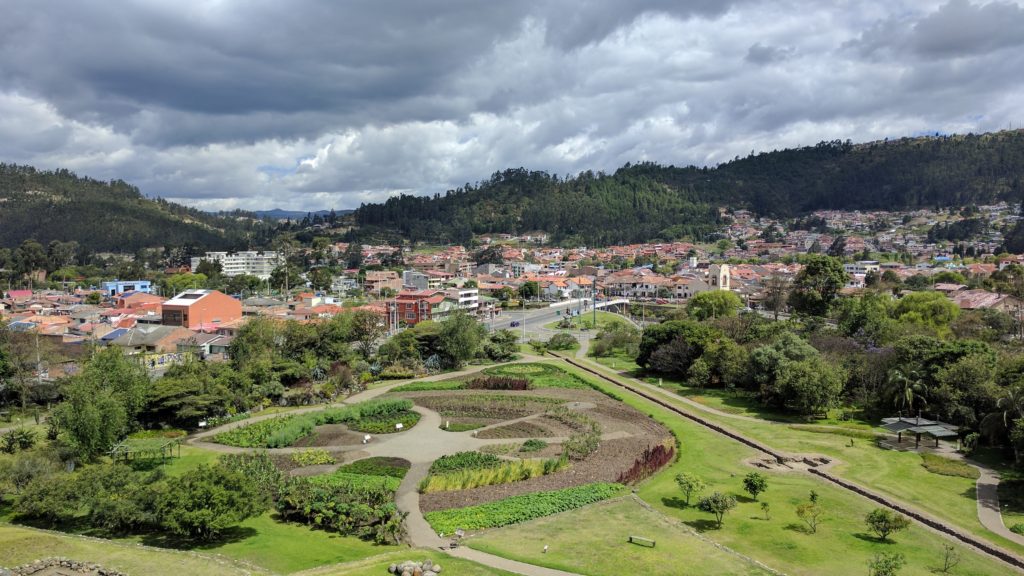 Ecuador is known by few as the home and birthplace of the famous Panama hat. They’d always been made in Ecuador along the coast but businessmen in the 19th century managed to ship them worldwide from ports in Panama, thus solidifying the name forever as ‘Panama Hats‘. Having found one for Matt’s dad along the coast, we set out to find one for Sarah. 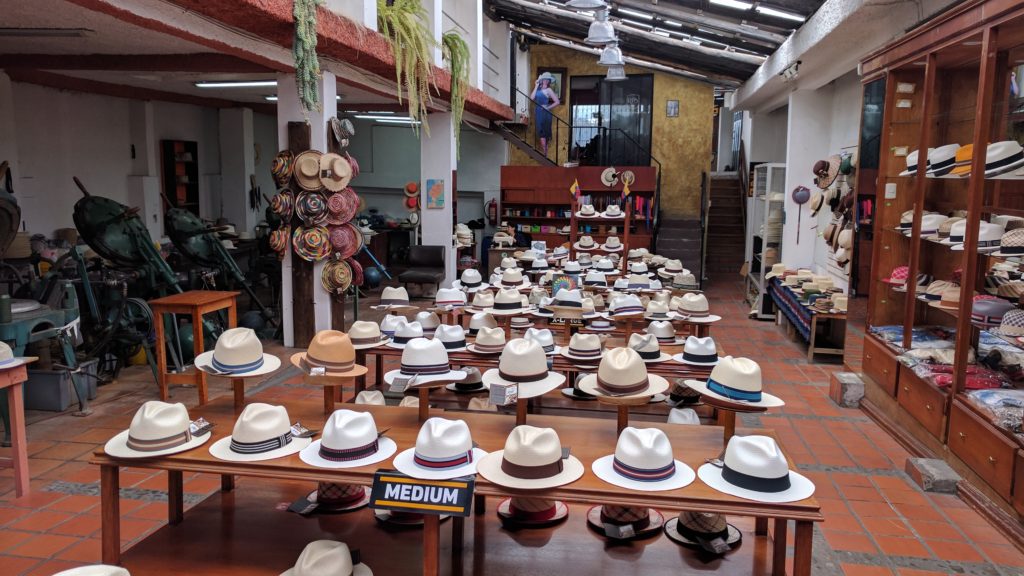 Cuenca eventually became the primary fabrication city of the hats, so we visited some stores and even the museum but alas, the correct hat for Sarah was to be found elsewhere. A nice night in the city with some good food was had and the following day we set out to explore more of the countryside. 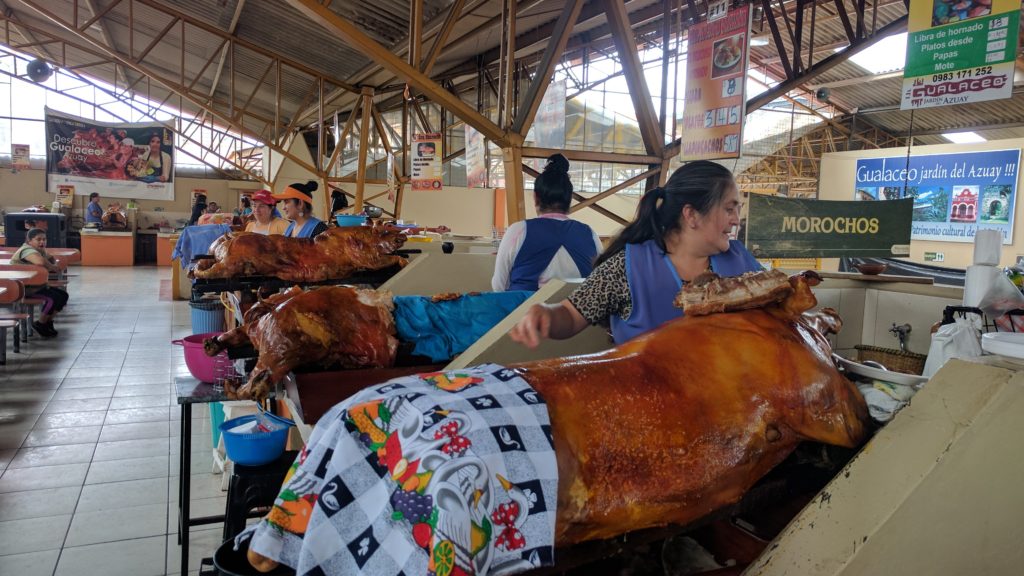 Stopping in small towns to have a look around is one of the joys of traveling in a vehicle. On the way towards a climbing area we discovered two small towns with amazing treasures. The first had a market with some of the best cooked pork we’ve ever had! Vendor after vendor was selling delicious roasted pig in its entirety. 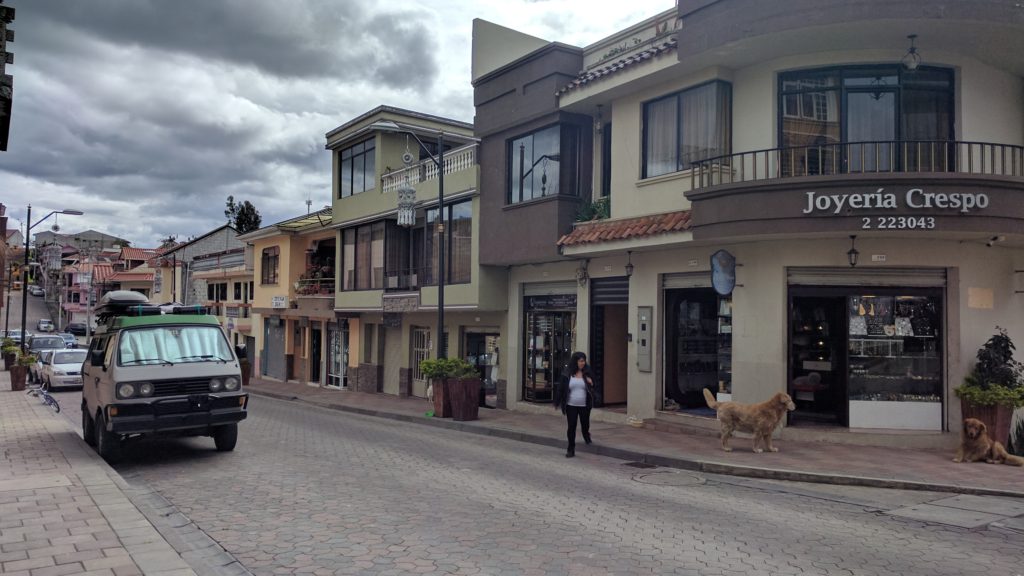 The second we stumbled into was known for its silver jewelry making. There must have been over 100 stores in Chordeleg selling various styles of jewelry which was unbelievable to see. And as women always tend to do, Sarah picked up a pair of earrings and a matching ring for our fancy nights in the van. 😉 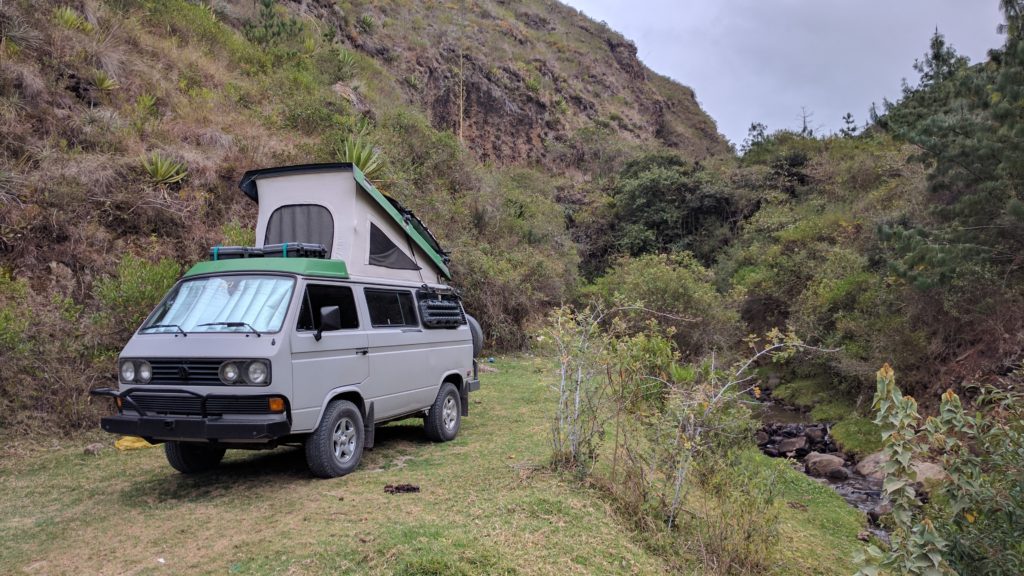 After our little pit-stops, we made our way to Paute where climbing and a wild camping were eagerly waiting for us. The next day, we enjoyed the rock and tranquility. 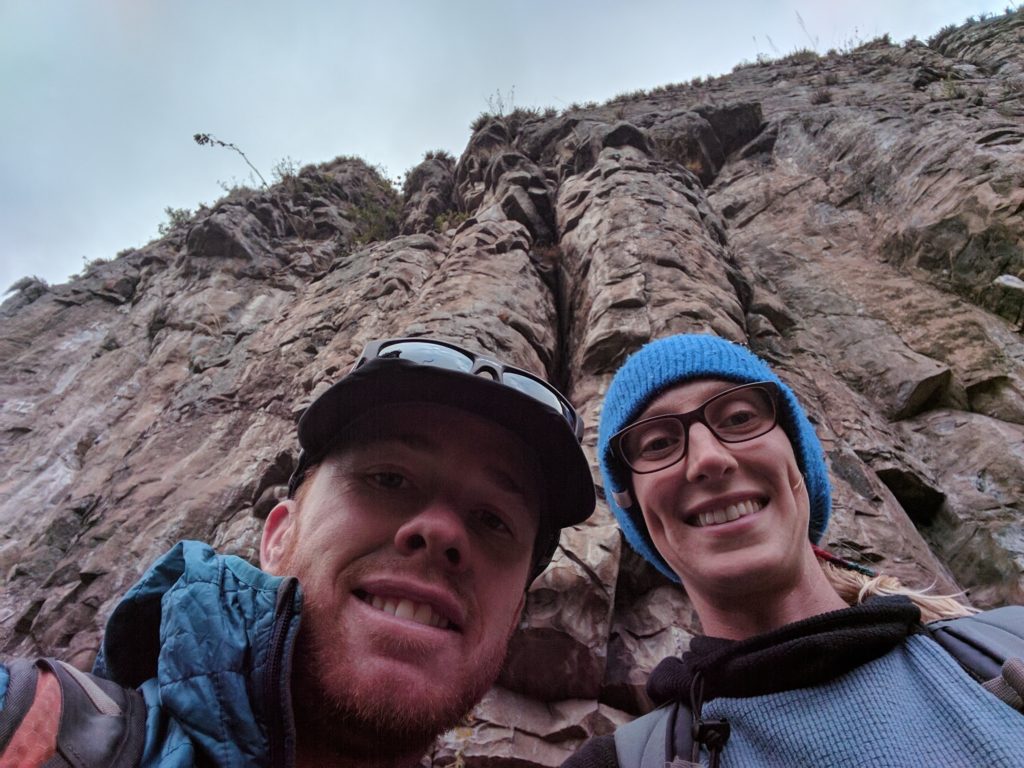 After Paute, heading north of Cuenca, we came across a small village with a nice little town square where we witnessed many locals dawning authentic Panama hats. We decided to ask around and sure enough a nice local led us to a store owned by several friendly women who were in the process of making the hats by hand. 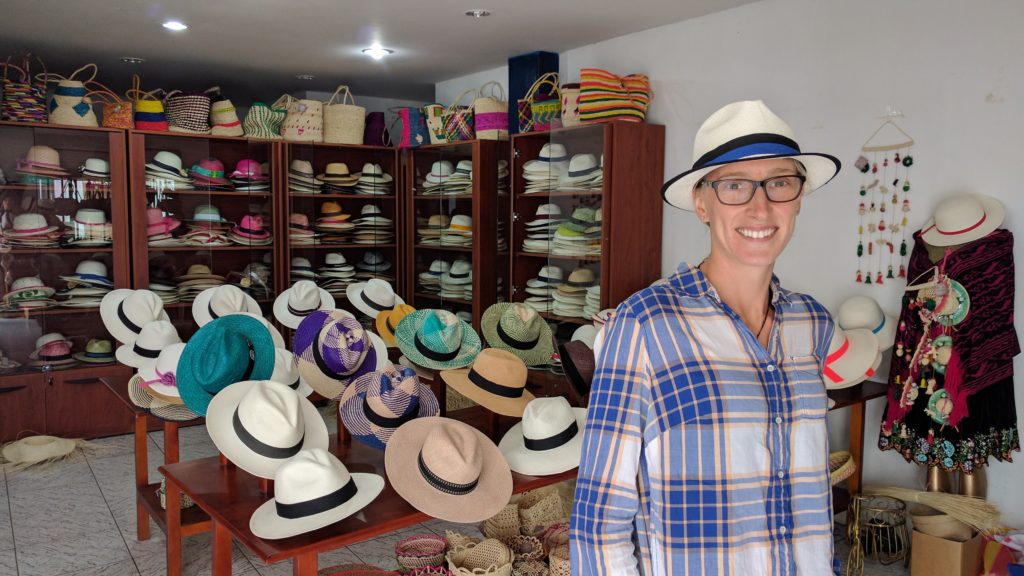 They took one look at Sarah and went to a case where many hats were stacked and low and behold, they found Sarah’s new hat in less than a minute. The fit and style were perfect and they even offered an amazing price where no bargaining was necessary. 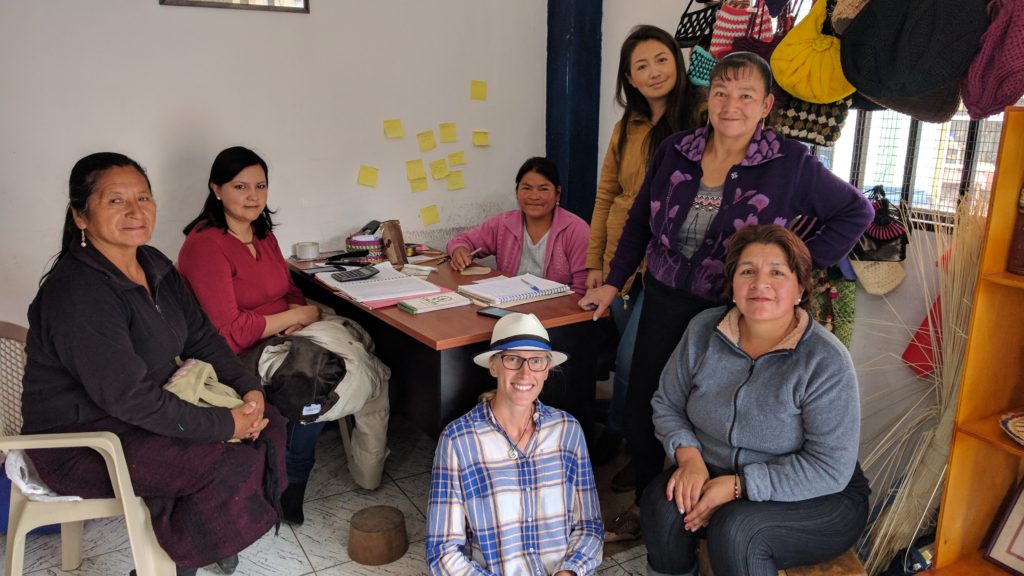 We ended up chatting with the friendly ladies for part of the morning and couldn’t tell who was more excited about the hat, us or them. So, with Sarah’s new favorite souvenir on her head, we ventured onward towards the most important pre-colonial ruins in Ecuador, Ingapirca. 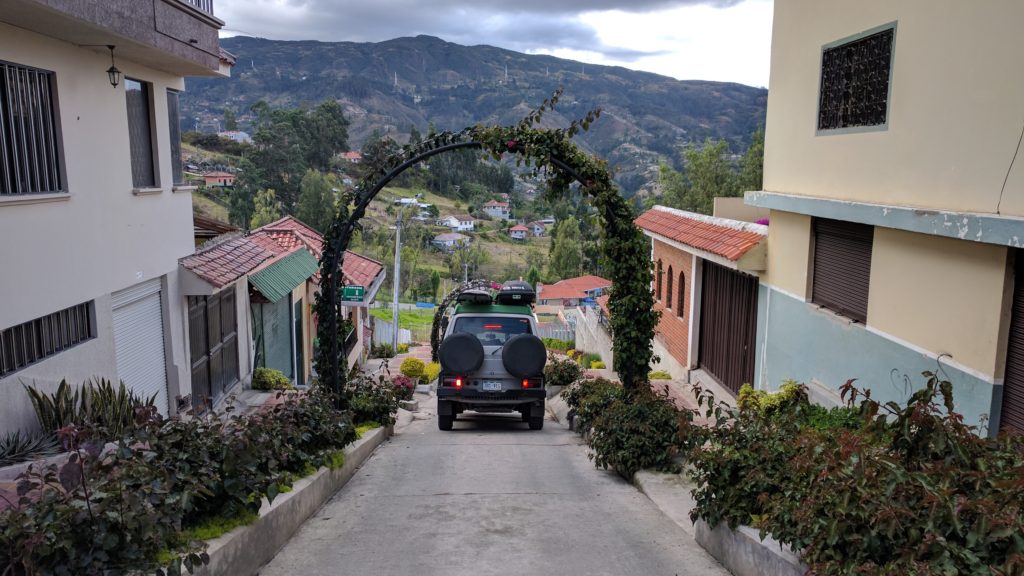 Visiting the ruins of Ingapirca included a guide (in English!) who passionately described the large ceremonial site. The Canari peoples of Ingapirca were worshipers of the Sun and Moon and built elaborate temples dedicated to study and worship them. These people were master astronomers and knew from the sun, moon and stars when to plant and harvest. 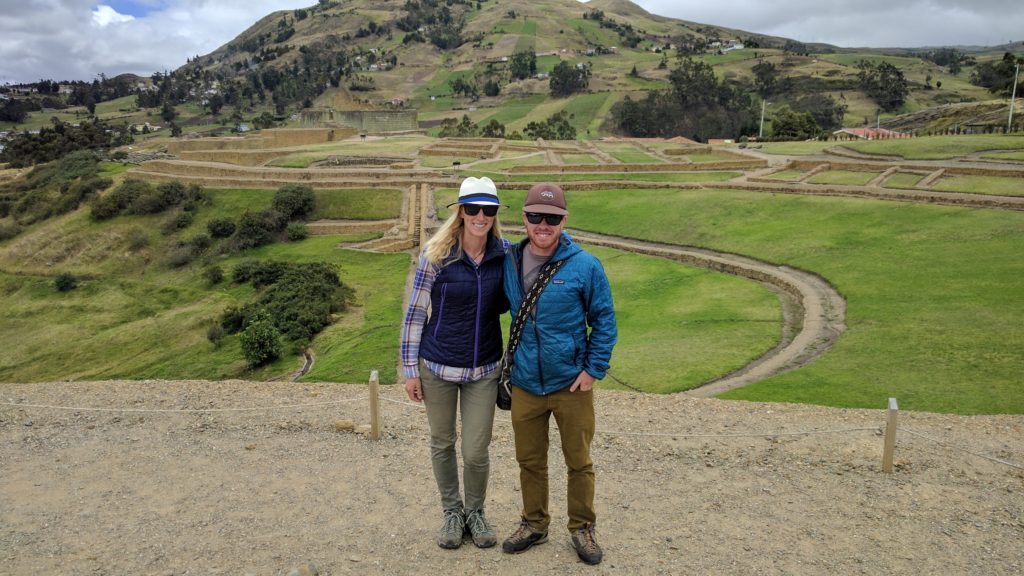 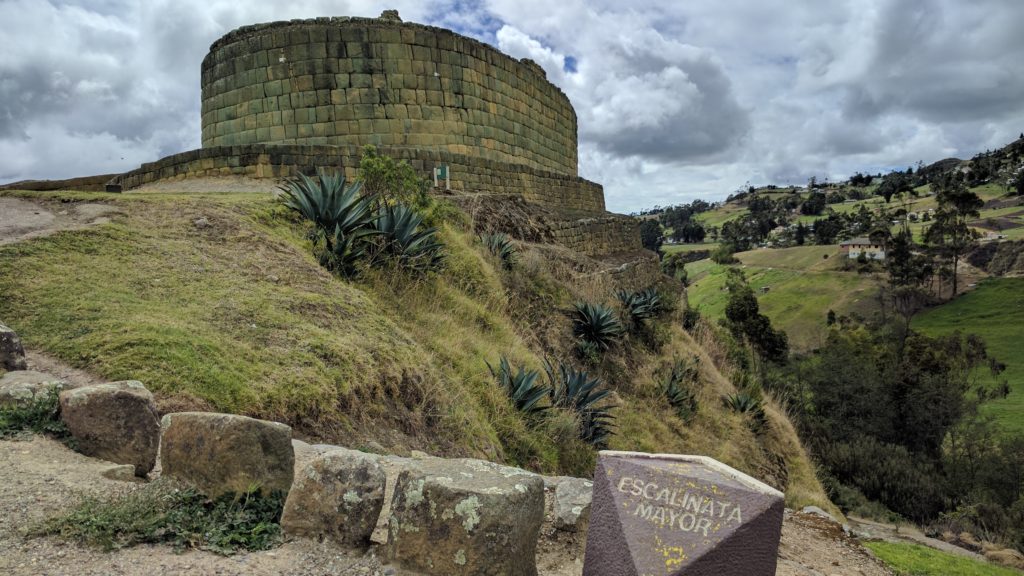 As the Incan empire conquered its way north from Peru, they had problems conquering the resilient Canari. Eventually, the Inca king Tupac decided to marry the Canari princess which led to a peaceful truce and harmonious life together in this area for many years. 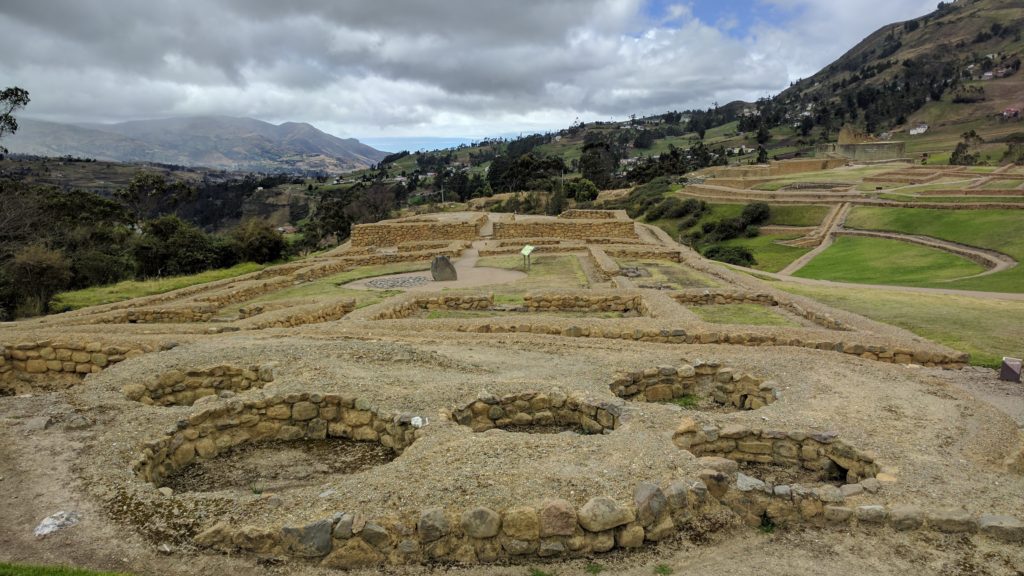 We were told that Ingaprica was to Cuenca as Machu Picha was to Cusco. These sites are considered the holy and spiritual centers near the bustling capitol cities of the ancient cultures. 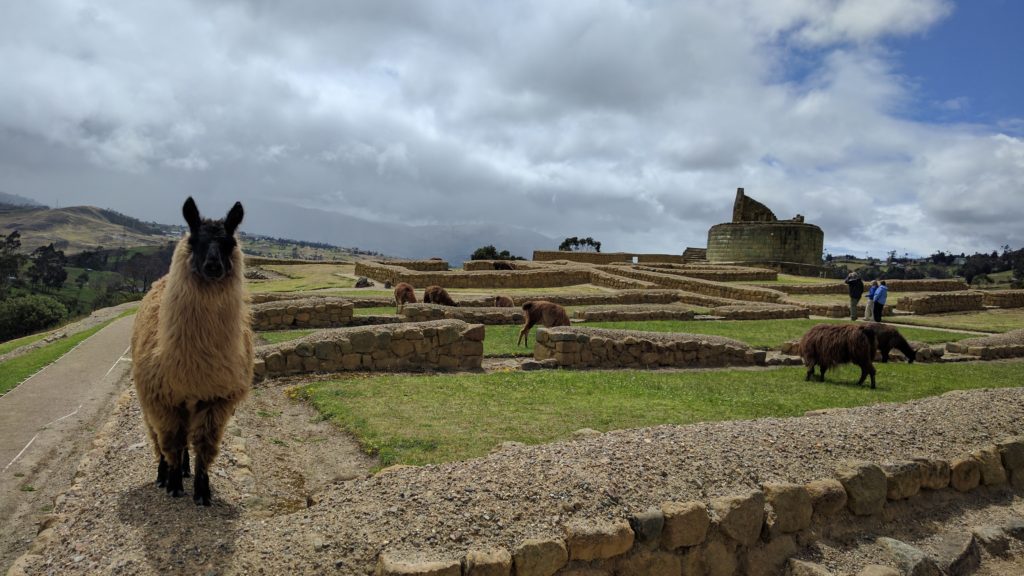 Thoroughly satisfied with our experience at Ingapirca and the wonderful Canari culture, we headed towards Cojitambo, another popular climbing area in the Cuenca area. 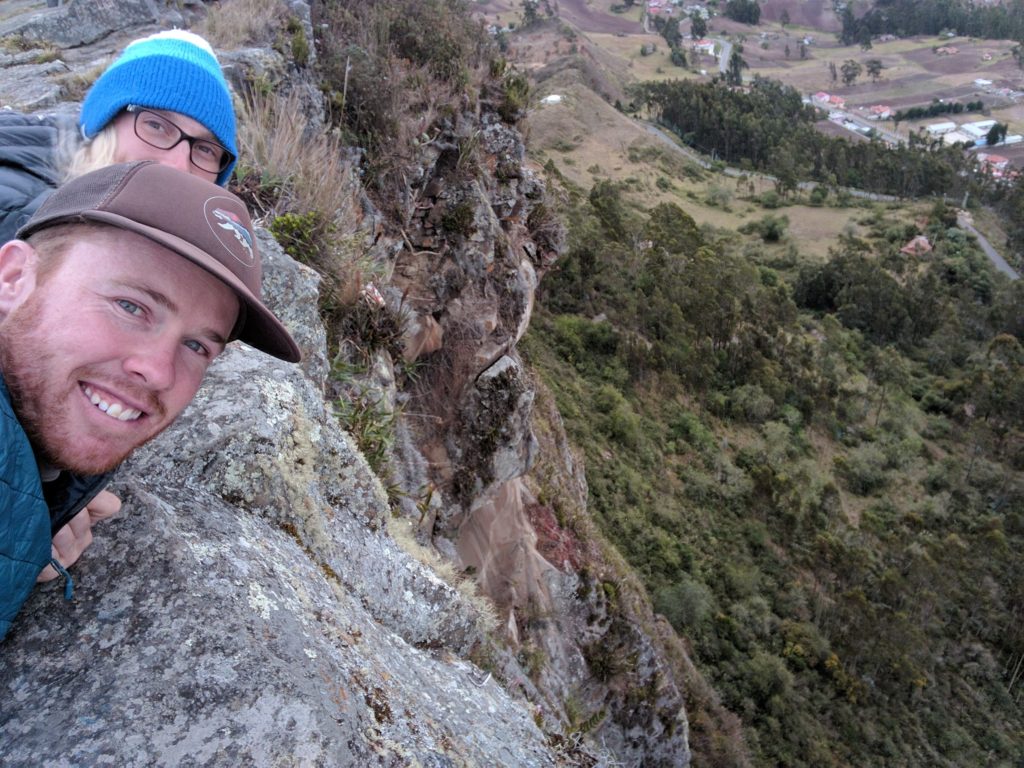 It took us a little while to figure out where to park, but after some time and patience we stumbled upon one of our favorite spots of the trip. 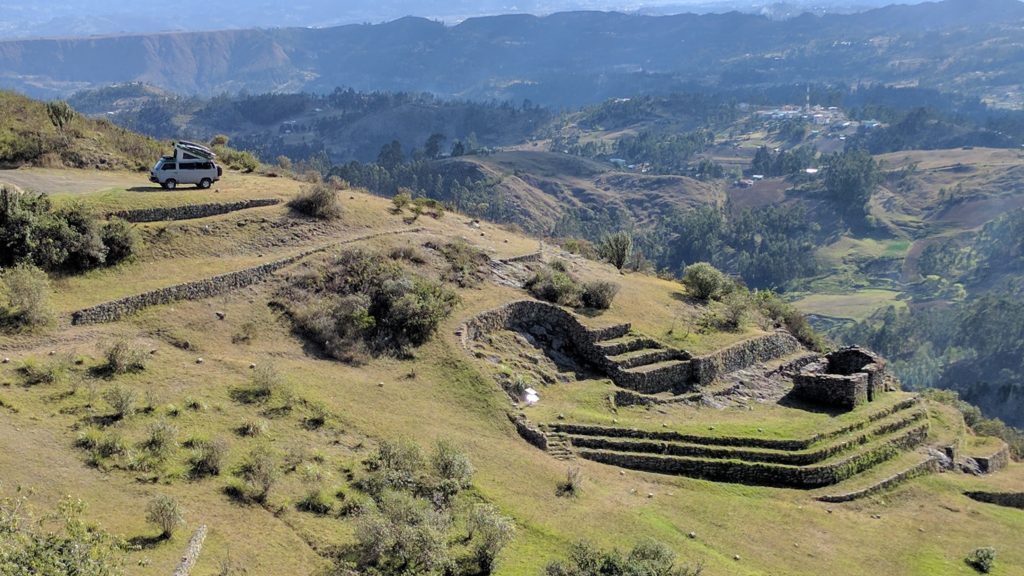 We literally camped atop some Canari ruins that were open to the public and resided on top of the monolith where the climbing was. We could rappel right into the climbing from near the van and had spectacular views of the surrounding towns and countryside. Yet another over-lander’s jackpot found in Ecuador. 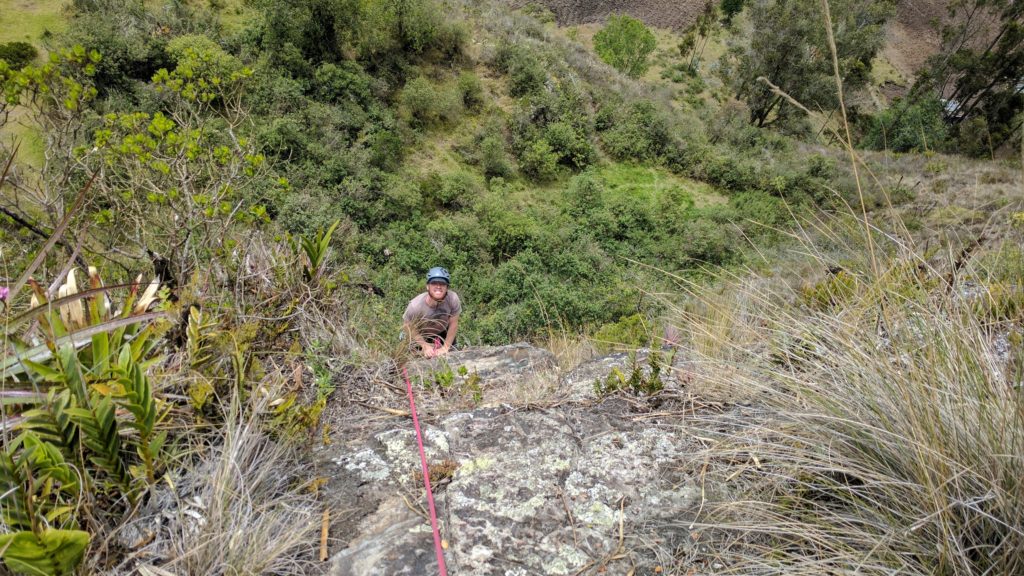 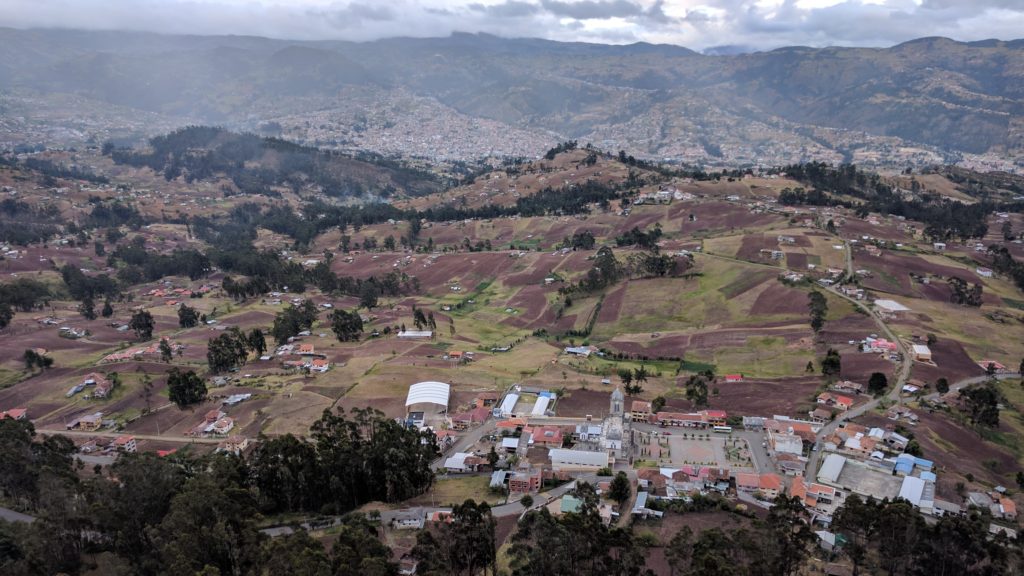 We discovered some interesting ruins after rappelling into the climbing area. There seemed to be nooks to discover around ever corner. 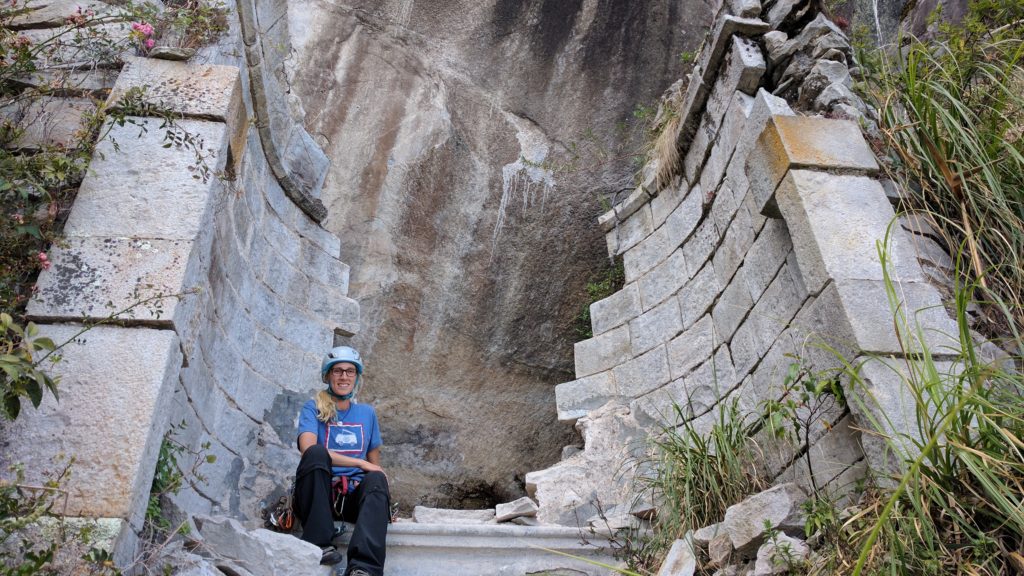 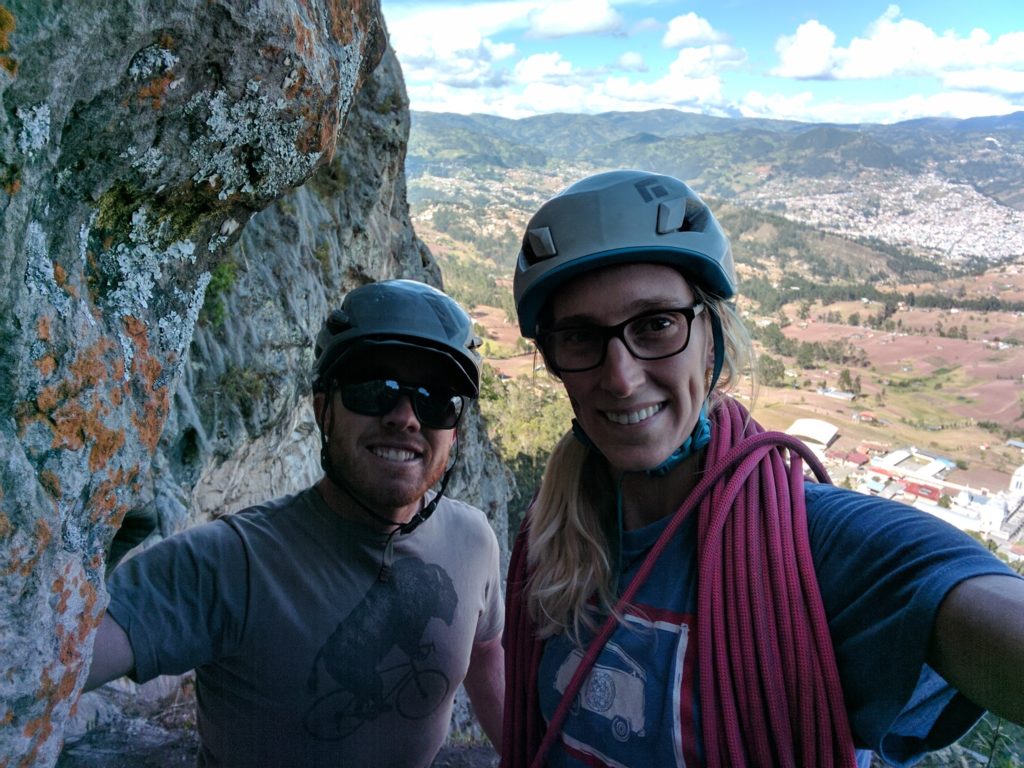 We even used the open space on the ruins below the van to play some classic Frisbee toss. 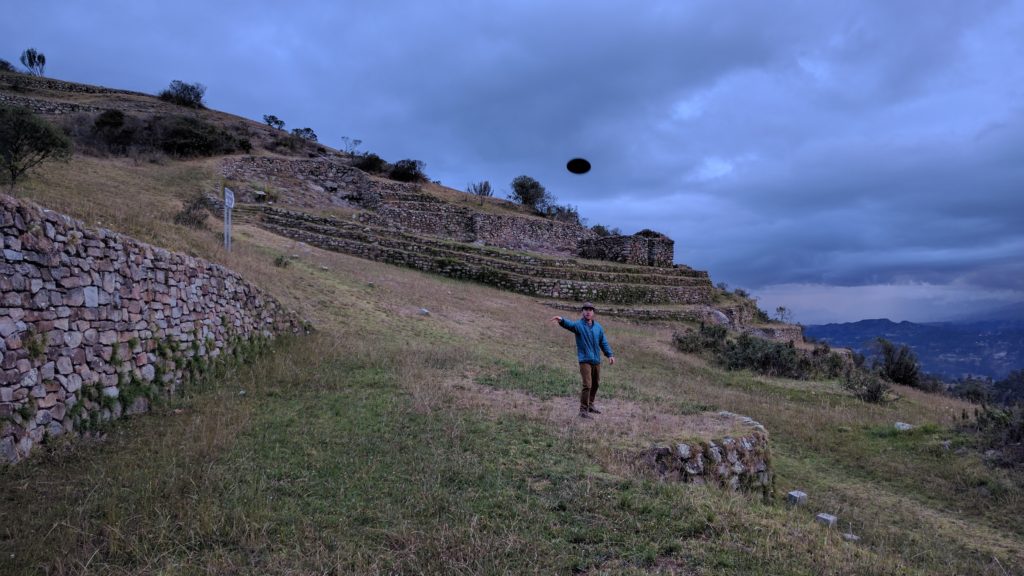 Now that our arms were nice and tired from some great climbing and taxing Frisbee toss, we kept Koru’s nose pointed south with minor stops prior to entering our 11th country, Peru. A quick stop at a nice waterfall, dinner sampling traditional cuy (guinea pig) and night spent next to some friendly bomberos (firefighters) gave us time to reflect on our time in Ecuador and our trip as a whole. 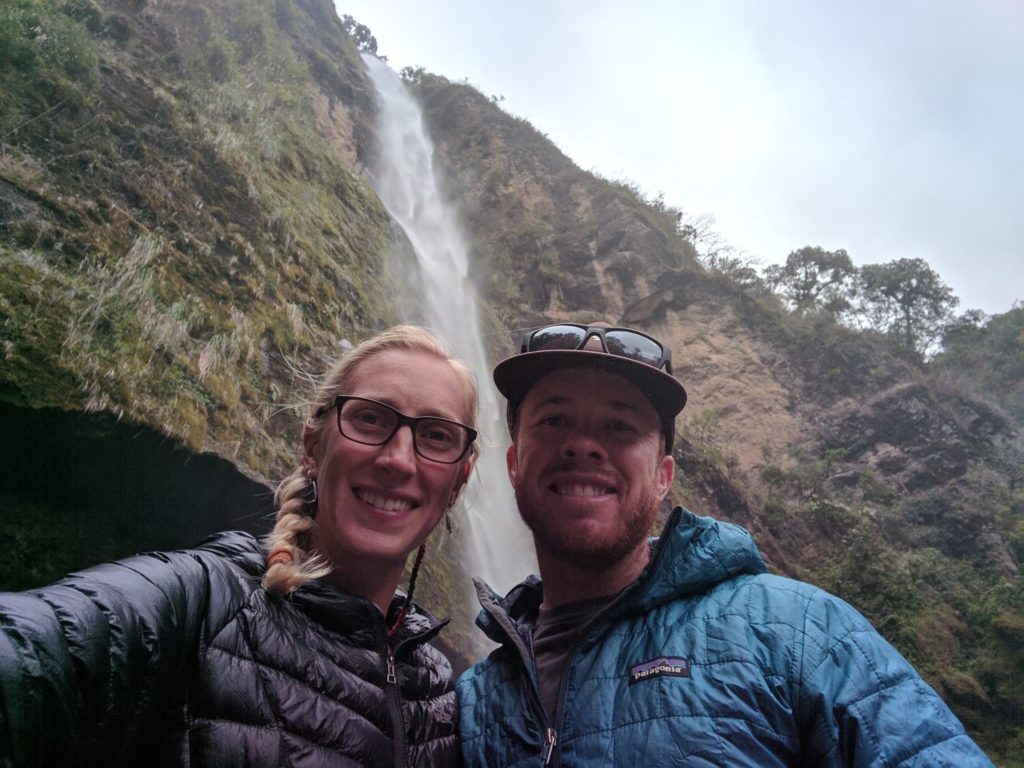 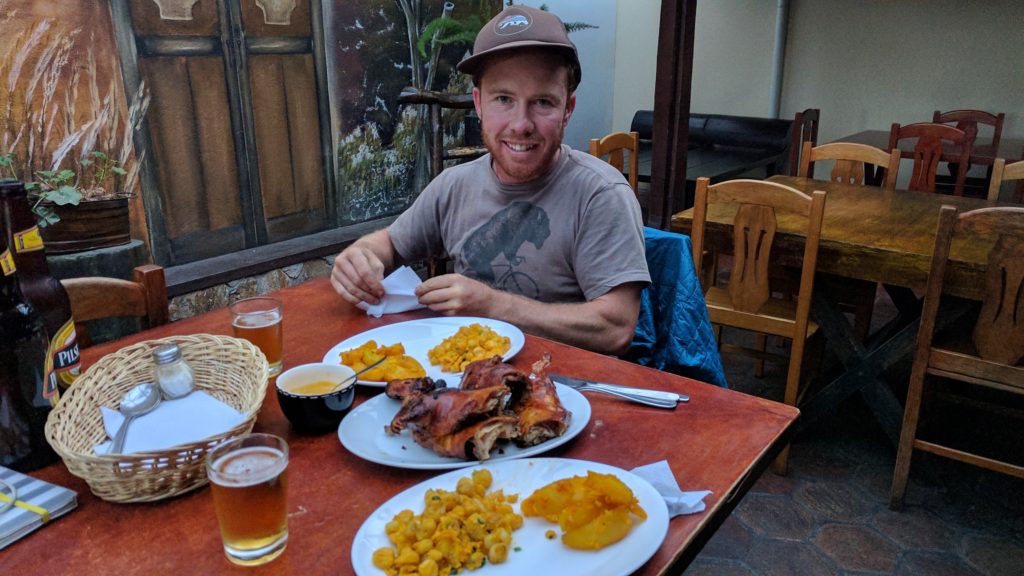 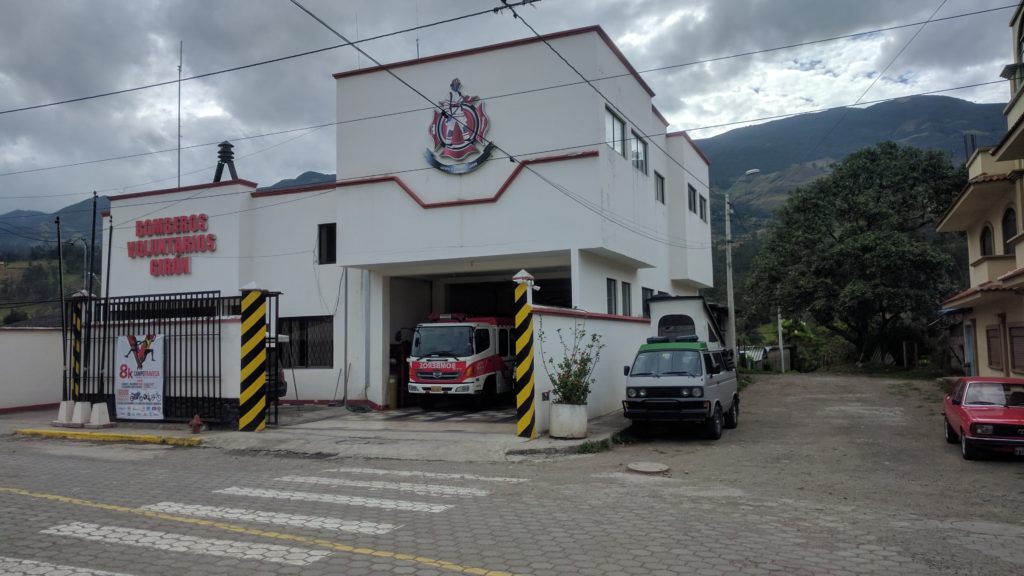 We ventured further towards the border of Peru on Ecuador’s uniquely amazing roads and reminisced about the ups and downs and our life choice to travel and dwell in a van. 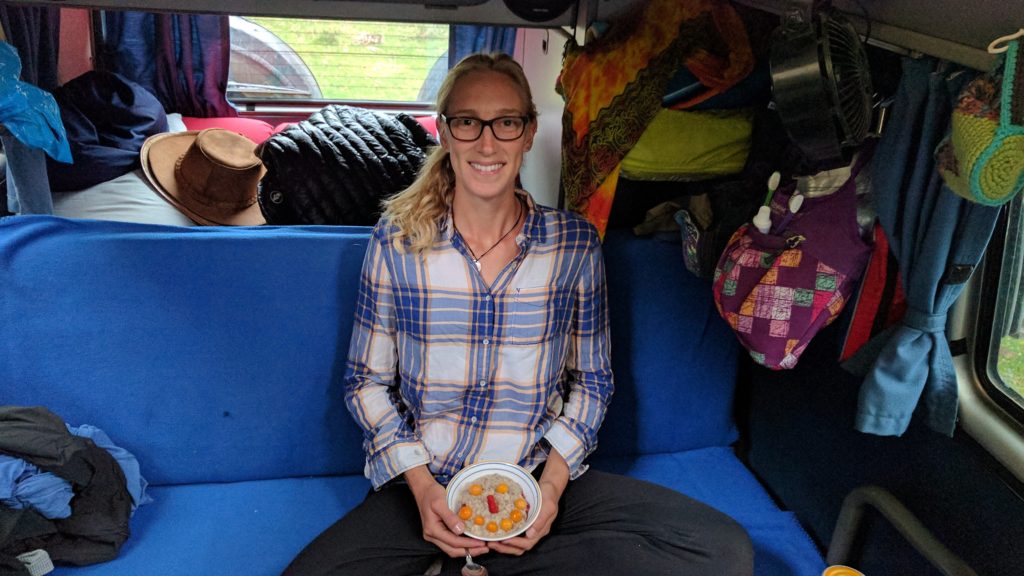 All we could do was smile and press on, knowing that we were truly lucky and living life to the fullest. Here we come Peru! 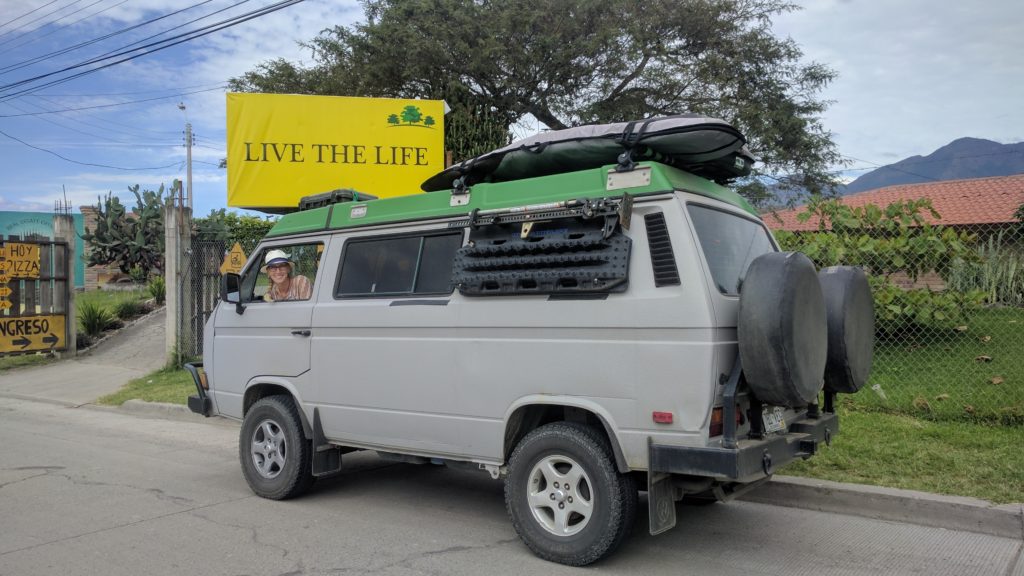 9 thoughts on “Cuenca, Canari, and Climbing”