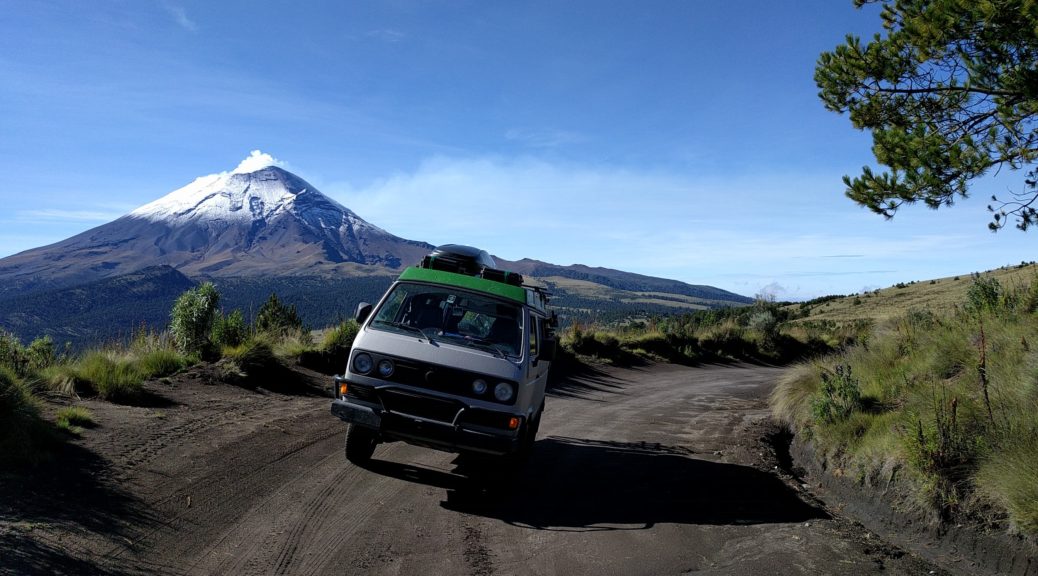 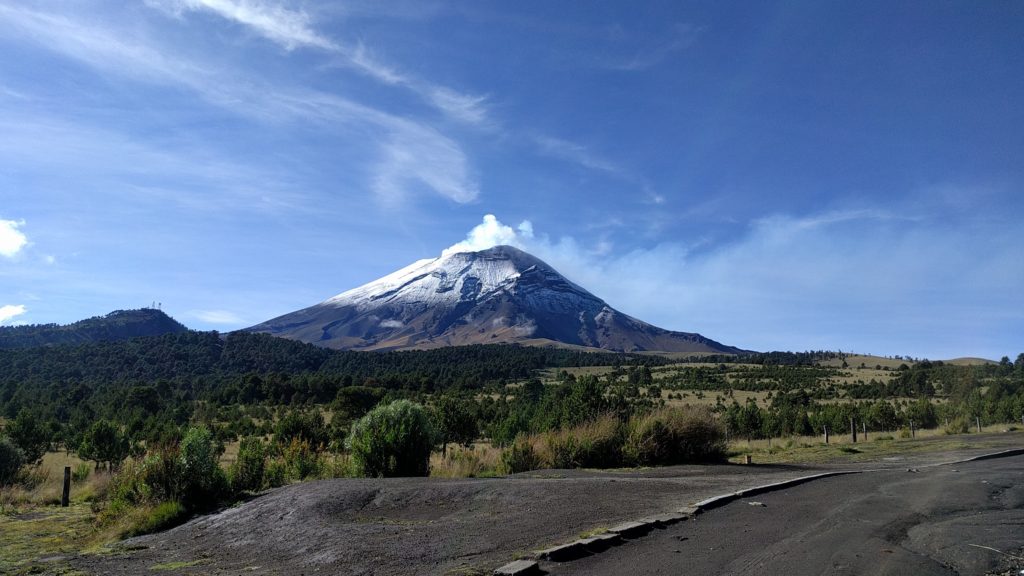 City life was fun, but we were more than ready to head out and explore the vast mountains outside of the city. With Mexico City sitting at an already impressive 8000 feet, it didn’t take long to reach the foothills of the incredible volcanic mountains and Mexico’s first national park just east of the city. 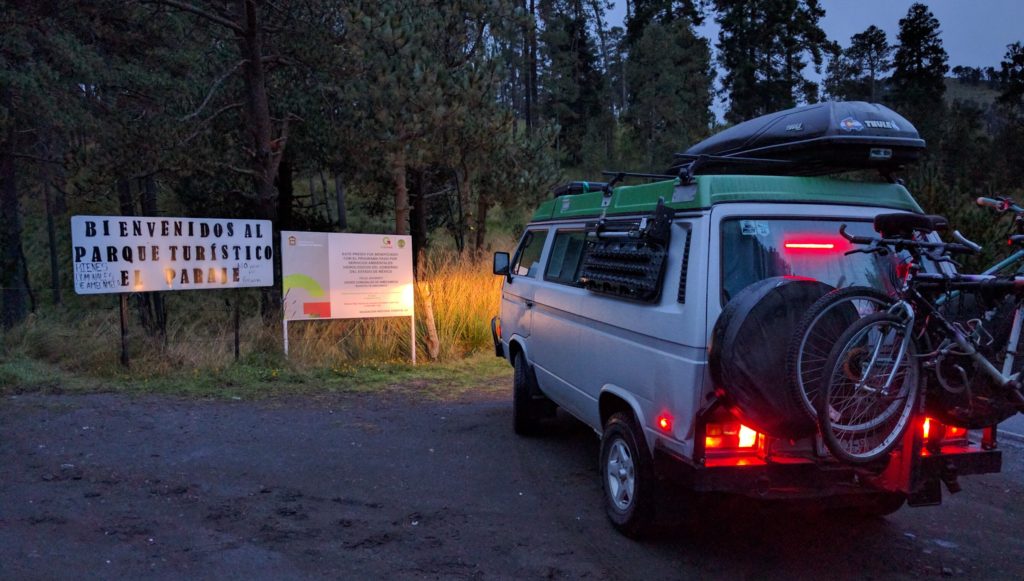 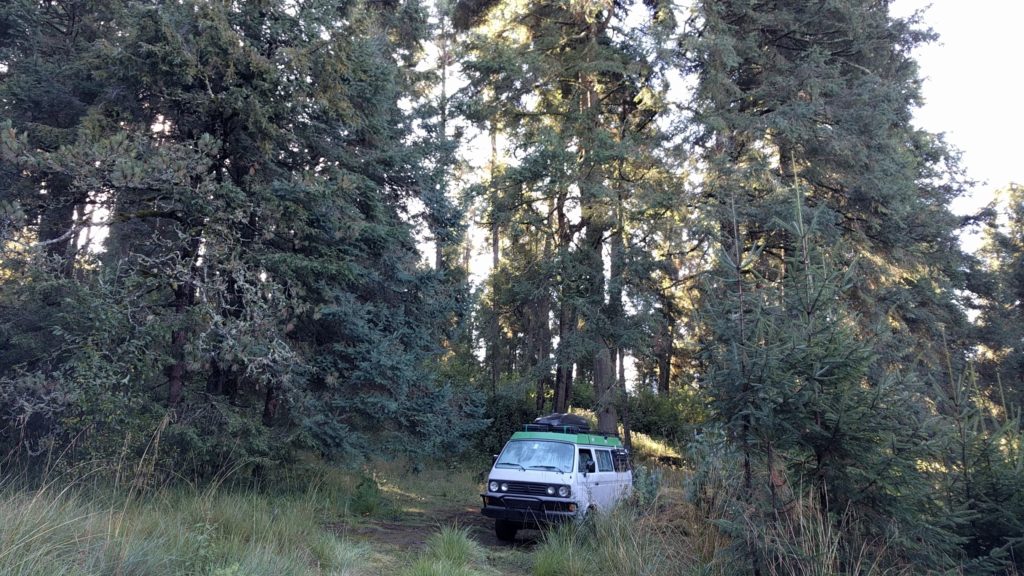 With little daylight left, we made it as high as we could before we pulled off of the road for a quick night of primitive camping. The cool evening temperatures above 10,000 feet were a joy and reminded of us of being back in the rocky mountains. We slept amazingly well that night, but were up early with hopes of glimpsing the two most famous volcanoes in Mexico, Popocatepetl (popo) and Iztaccihuatl (itza), before the clouds rolled in. There is an interesting legend regarding these two volcanoes that can be read about here. 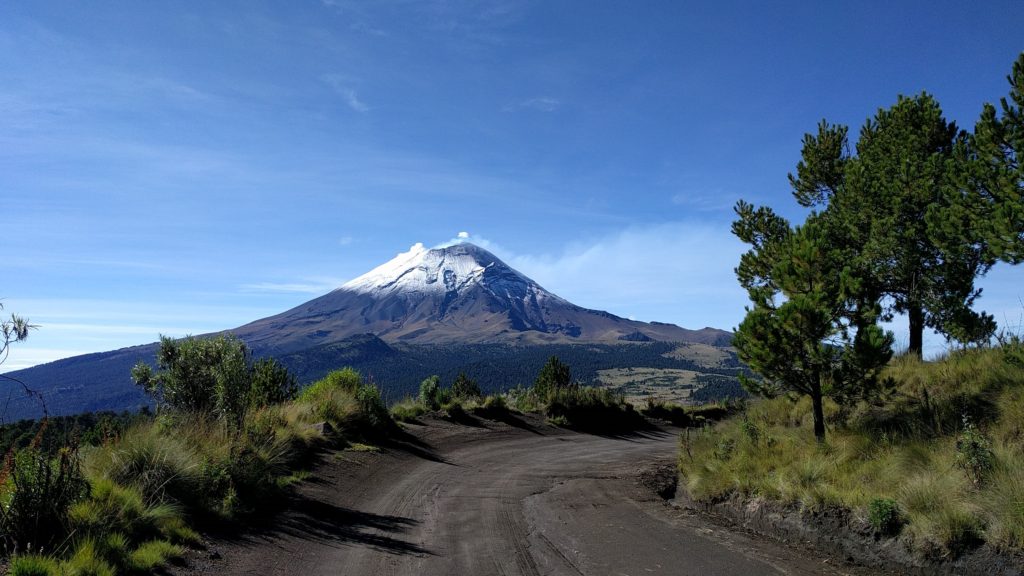 We spotted Popotepectl almost immediately and we quickly realized that we had almost made it to the top of the mountain pass the night before, and wow, it was a sight to behold. 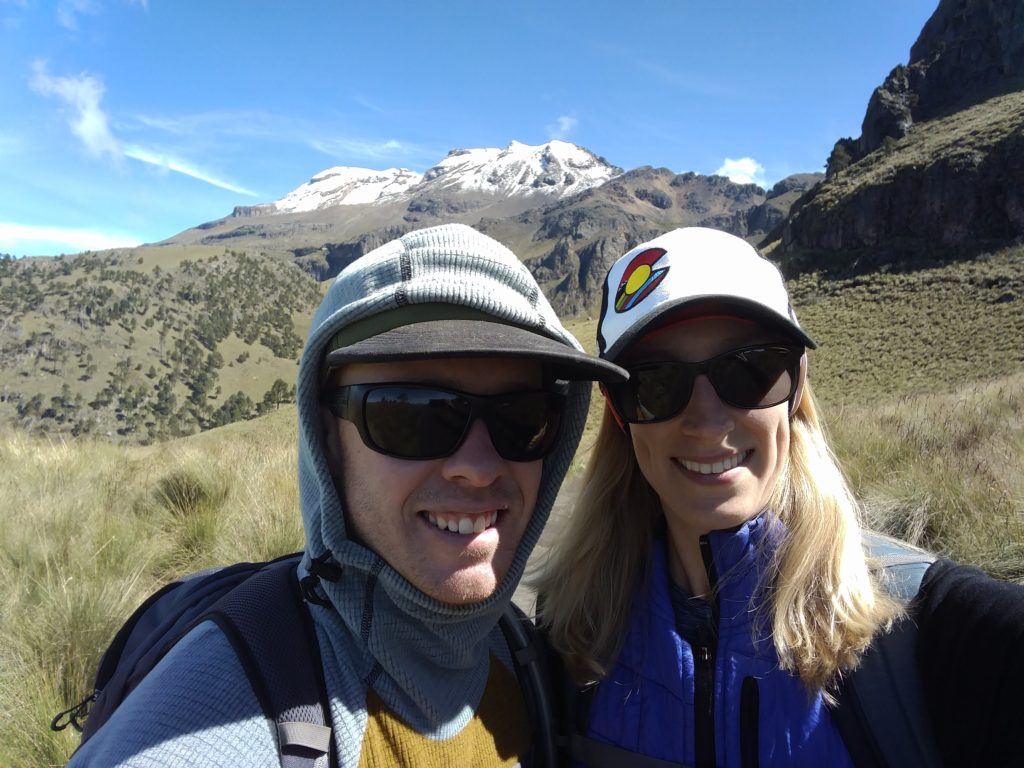 We hadn’t gotten any real exercise since entering the city so we were thrilled to go on a long hike up the side of itza as far as we could make it or until the weather turned. Popo is still very active and visitors are only allows as far as the road can take you to the top of the mountain pass. Itza on the other hand is dormant and more than willing to allow hikers tread upon her soil. Both summits suprass 17,000 feet and in order to summit Itza, it is recommended to have crampons and ice axes to navigate the snow fields. Knowing this, we knew we’d only make it part way.  The clouds rolled in on us after a little less than 2 hours. Our Colorado mountain experience advised us to turn around and head back down the trail. 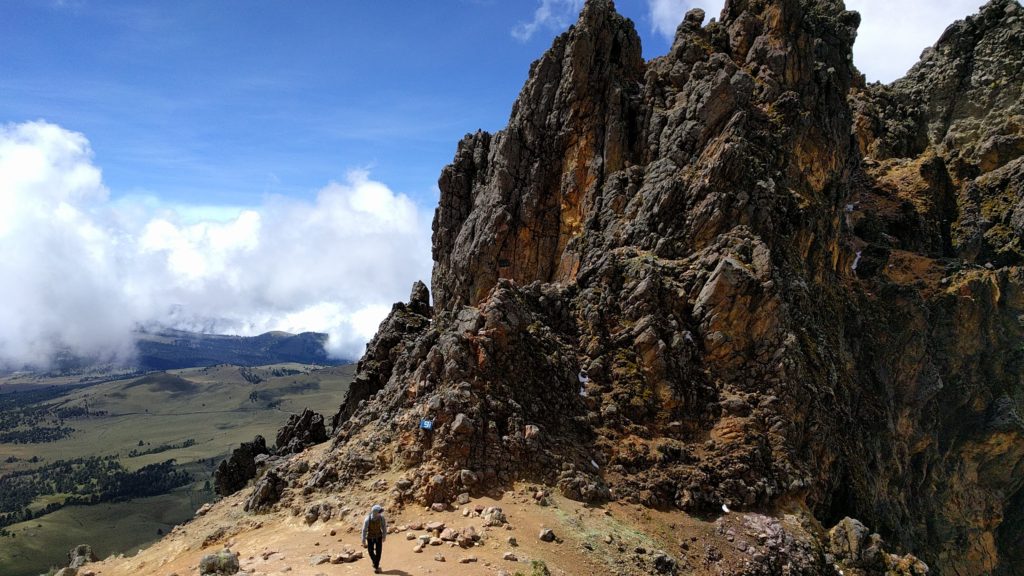 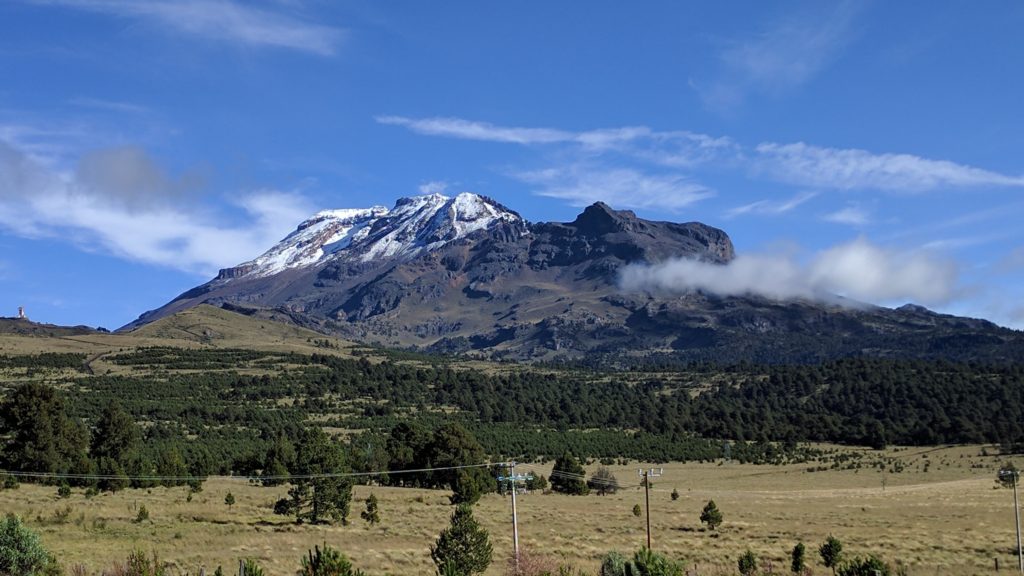 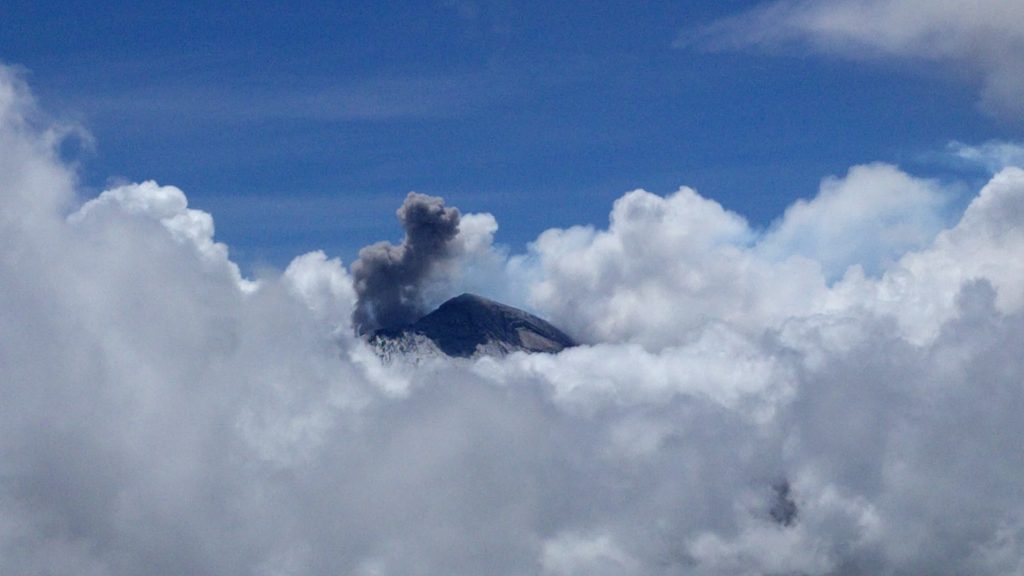 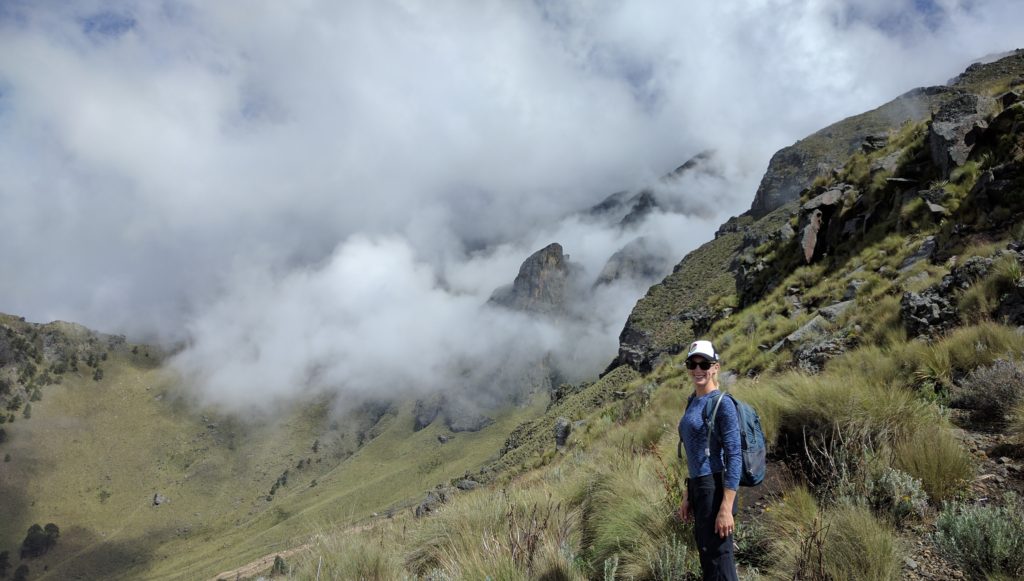 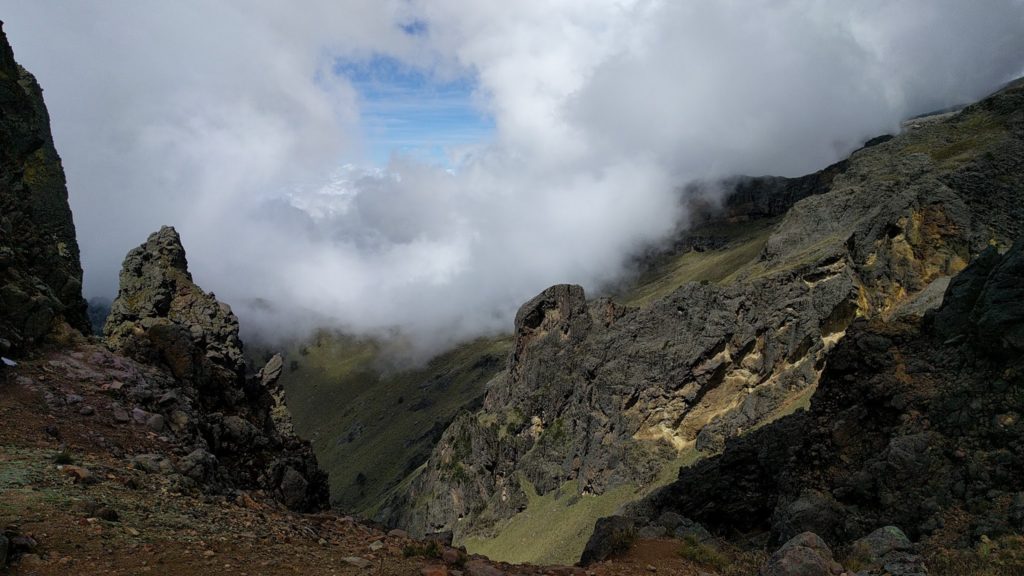 Upon returning to the van feeling good after a long hike, we were ready for the long decent to sea level. It is truly amazing that in the same day you can be higher than any mountain in Colorado and jump in the ocean. We took our time on the descent as we knew Koru’s breaks would be more than appreciative.  Along the way we stopped in the town of Cholula where we had the best Mole dinner either of us had ever tried. We also viewed another Spanish Basilica built on one of the largest pyramid ever discovered. With little time left in the day, we opted to not visit the archaeological site due to the fact that only a small portion of the pyramid was excavated. 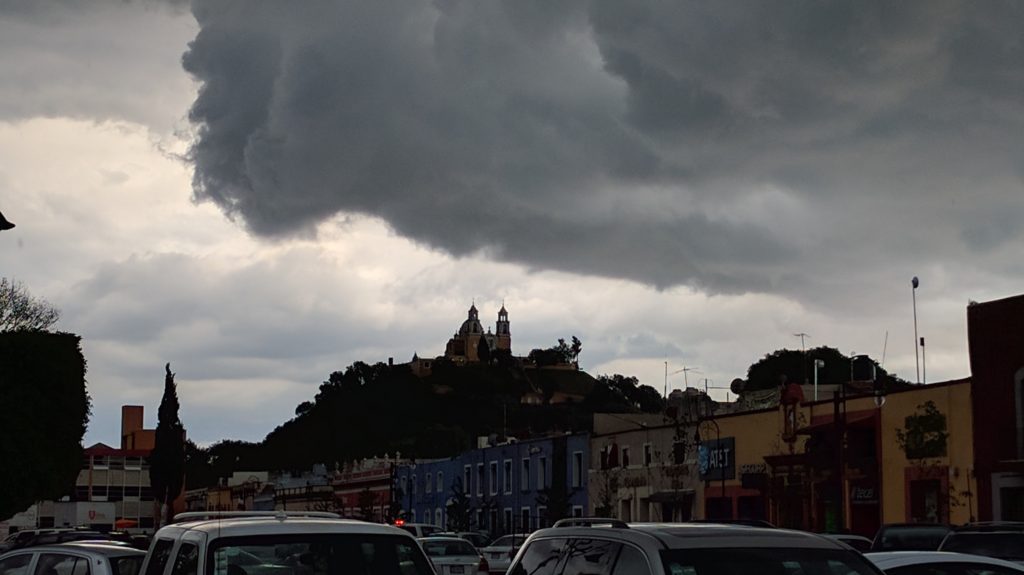 We decided to split up the drive to the ocean and spend the night at a gas station along the highway.  We woke up to see the amazing view of Mexico’s tallest mountain, Pico de Orizaba. 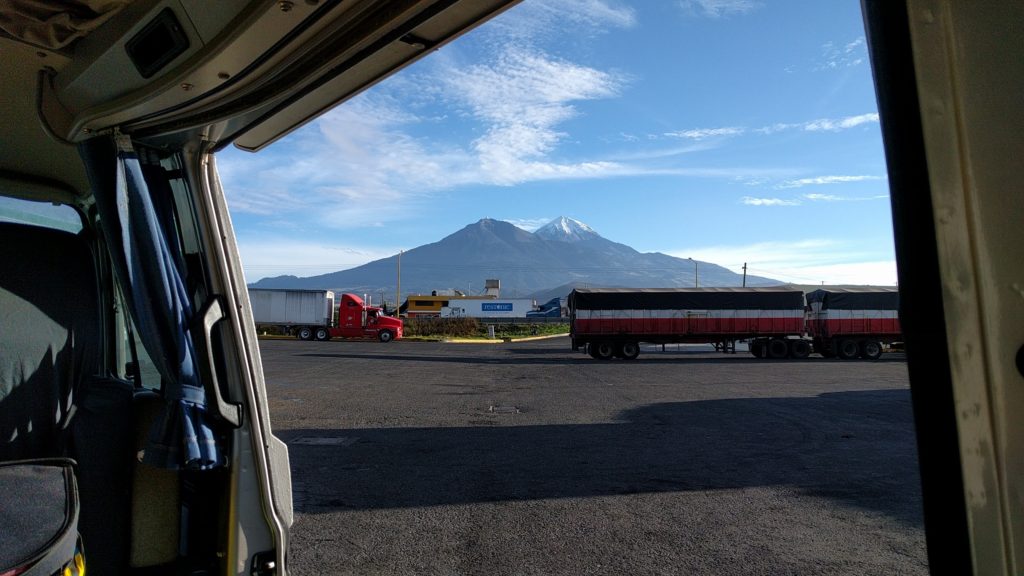 Our next stop was the town of Orizaba. We’d dropped several thousand feet since leaving the gas station, and the surroundings were beginning to feel more tropical. The geology was still volcanic creating striking mountain landscapes similar to those found in the Hawaiian islands. Waterfalls and friendly people were everywhere here. 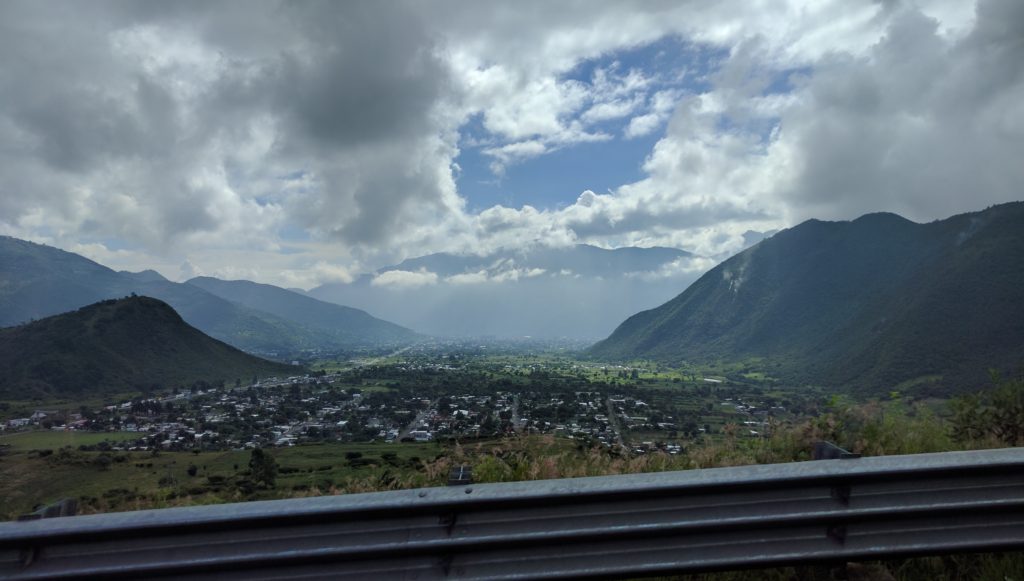 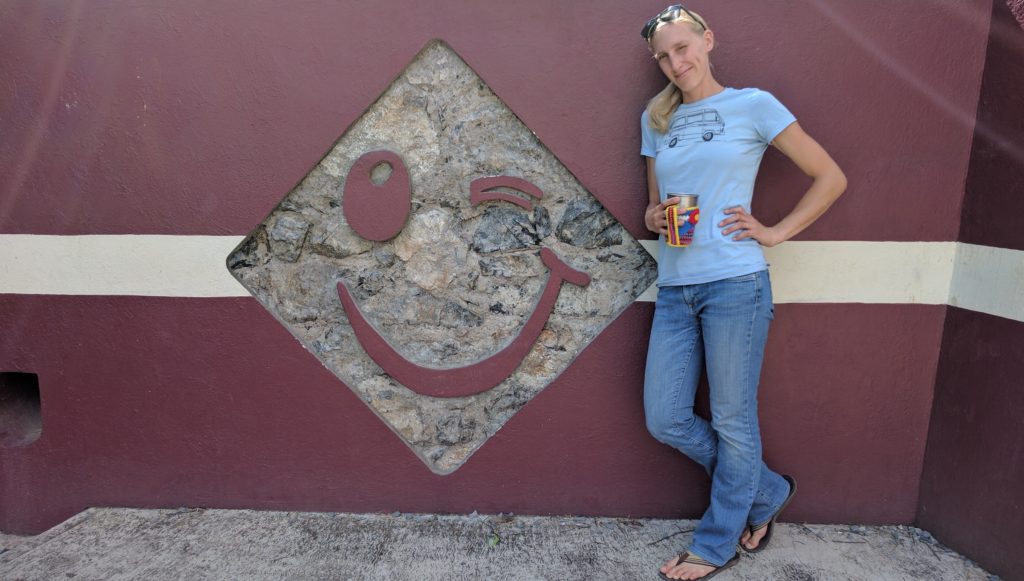 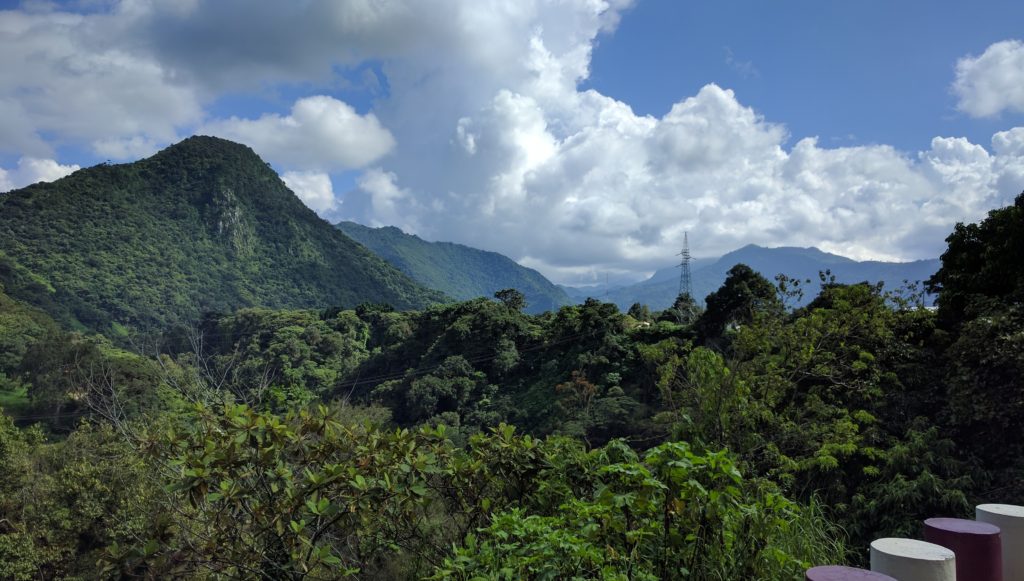 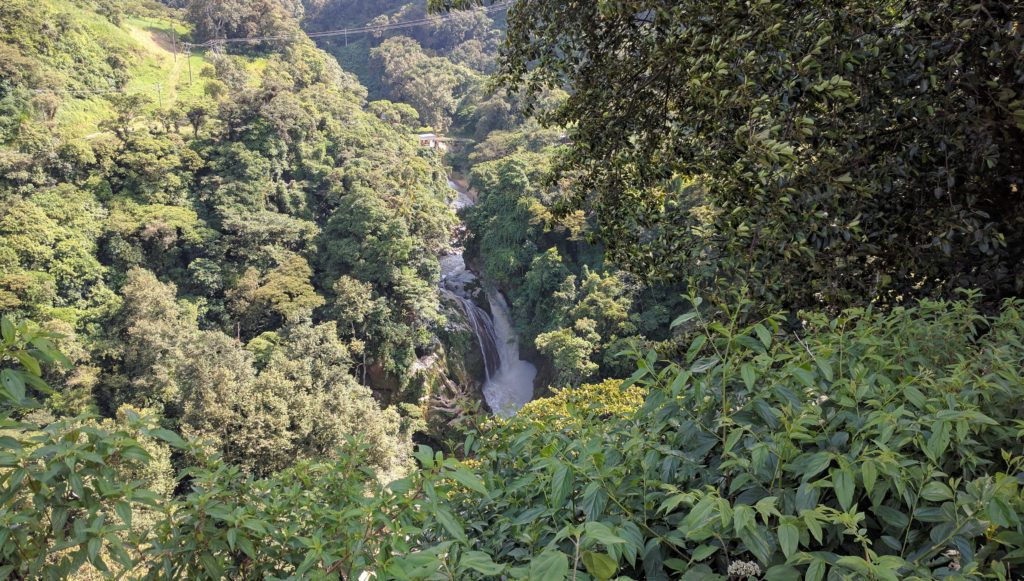 And, low and behold, we had our first vanagon sighting! Up until this point we’d only seen the older bay window, or kombi vw van, and hundereds at that, so we were thrilled to see the first of our fellow brethren. 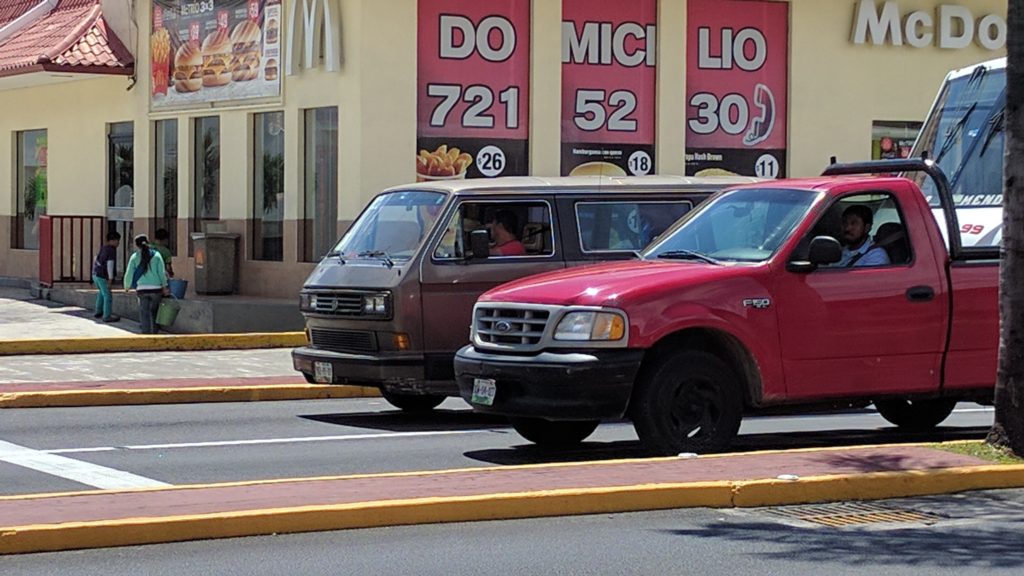 Our goal for the night was somewhere in the vicinity of Veracruz, Veracruz, where we would be spotting the ocean for the first time on the trip. Despite Matt’s excitement for surfing on this trip, it hadn’t bothered him that it took this long to get ocean side. Due to the amazing mountains, food and people experienced in the interior of Mexico, the ocean could wait. Upon entering the state of Veracruz earlier that day, we experienced the hot wet slap of thick humidity. We’d gotten used to the high temperatures throughout high elevation Mexico, but the humidity was our new opponent in the battle of acclimation. We still couldn’t believe that yesterday, 5 driving hours away, we’d thrown snow at each other while wearing puffy jackets at 15,000 feet. Yet another testament to the amazing diversity of Mexico.

We ended up arriving after dark and after some ill-fated attempts at finding a parking spot in the bustling city, we opted to continue south of the city along the coastal highway. We were hoping to find a public beach access road for the night which turned out to be difficult. With one more try before retreating back to the city for unsavory stealth parking, we stumbled upon the man they call ‘Gus’. 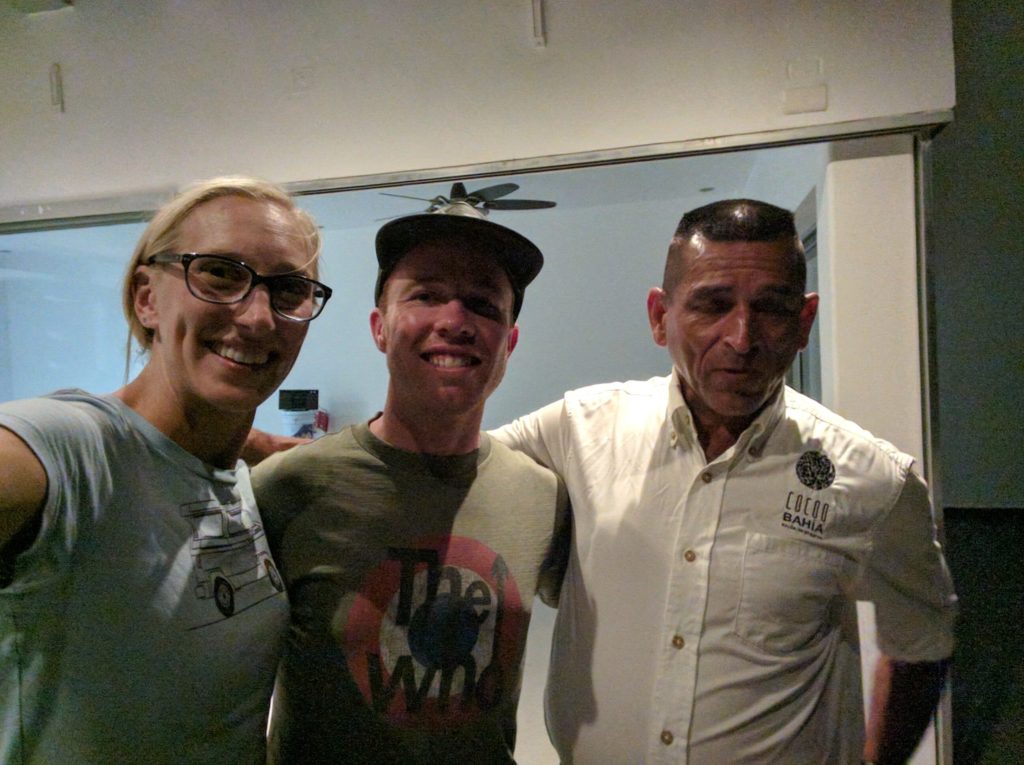 Having thought we found a public road, we quickly realized it wasn’t one, so we began to turn the van around. As we were doing this we spotted someone watching us from his balcony. We noticed he started making his way down to greet us and Sarah planned to ask where we might be able to park. Within a matter of seconds we realized that Gus was ecstatic to have guests. It turned out that he was a caretaker for a fancy beach house that gets rented out sporadically and he never gets the chance to entertain or visit with people. 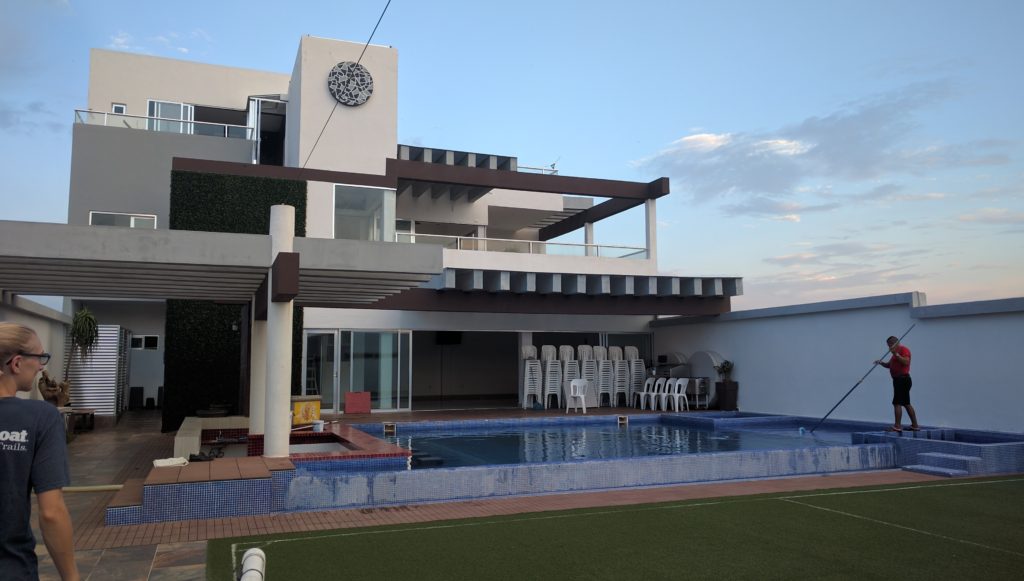 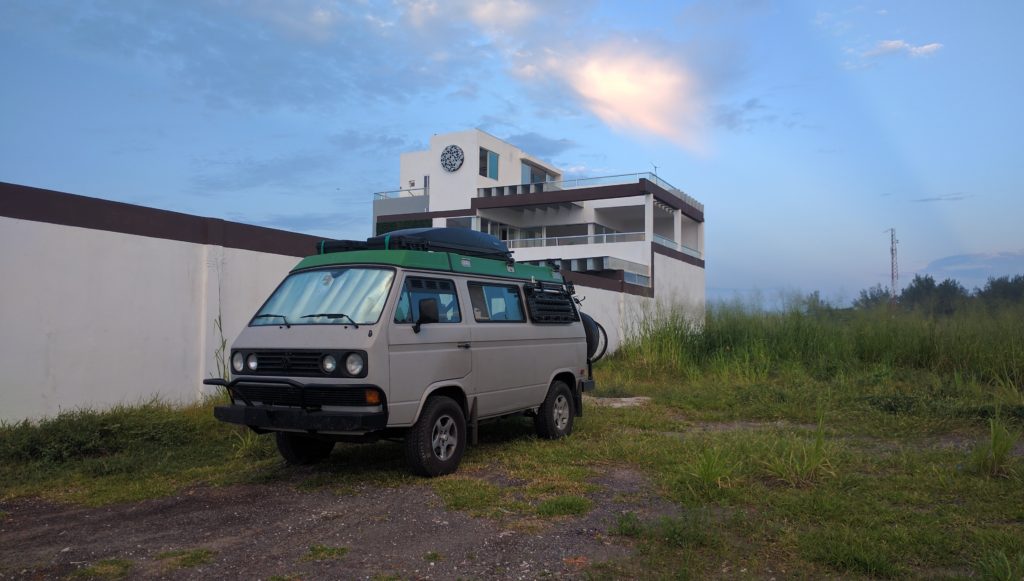 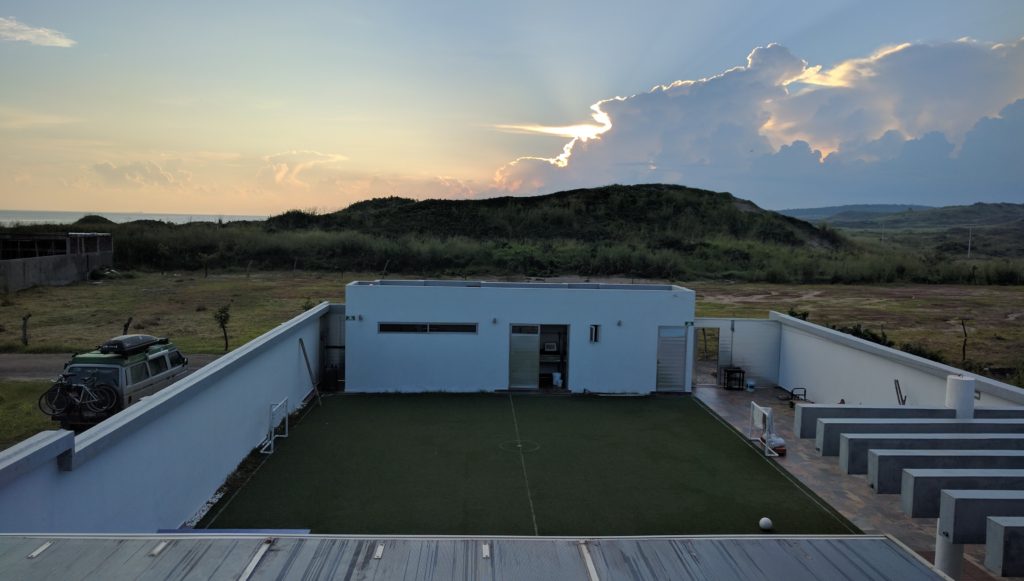 So there we were, comfortably parked next to a high dollar beach house getting whisked inside to drink beer and eat some crude flautas (rolled tortillas with cheese and fried) prepared by Gus. He immediately began talking about breakfast plans and was excited to practice his English. The night was dominated by his interesting yet eye-brow raising stories of his past. From three marriages and endless womanizing, to hostage situations with the cartels and US boarder crossings, there was no shortage of drama or intrigue in his stories, all in rapid broken English. All we could do was sit down, sip the beers and enjoy the ride with raucous laughter at every punchline. 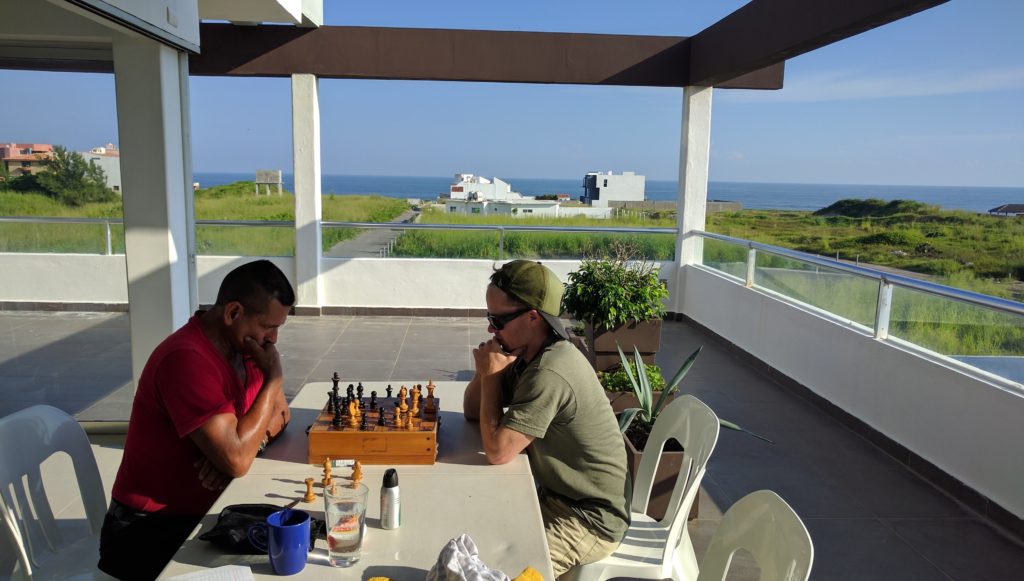 The following morning we helped make a breakfast of hot cakes and sausage while Gus schooled us in a game of chess before setting off into the southern reaches of Mexico.  With our serendipitous encounter with the man named ‘Gus’ coming to a close, we drove away, onto another day of adventure.

6 thoughts on “Beyond the City: The Mountains are Calling”