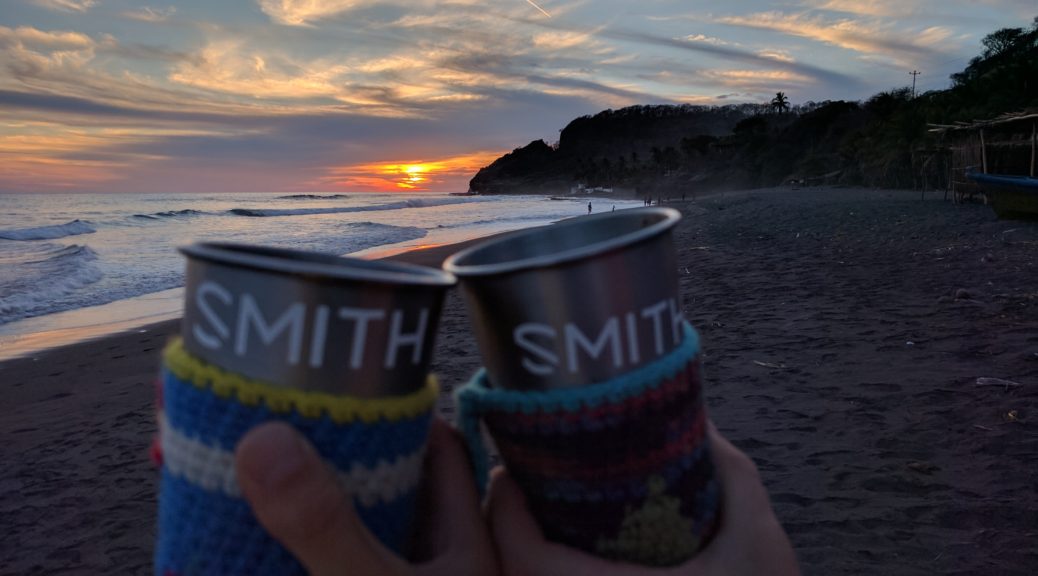 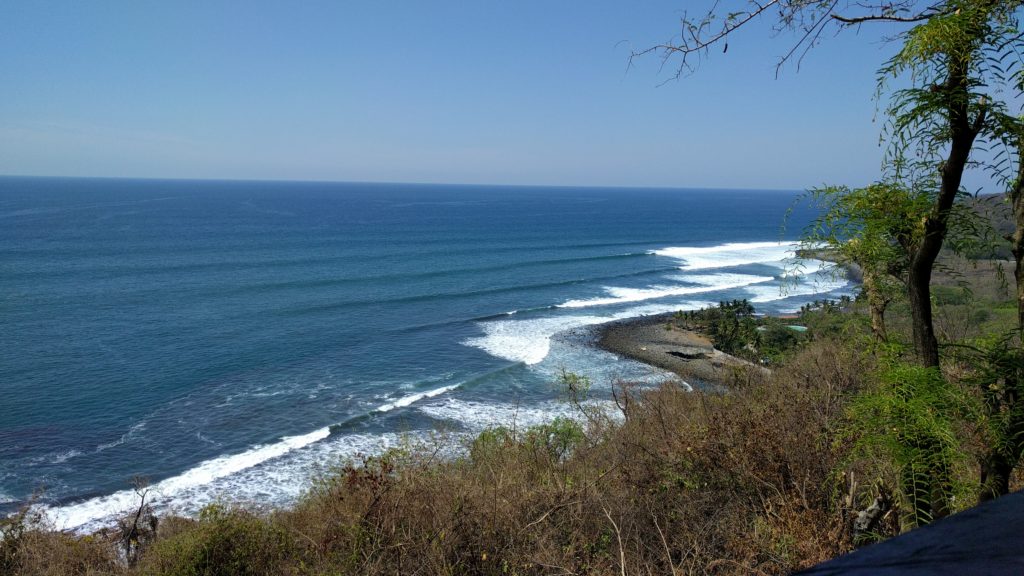 From the cool mountain air near the volcanoes, we made our way to Mizata, which is at the northern most point where the surf starts. We were excited to improve our surfing while hopefully exploring some small fishing villages along the coast. 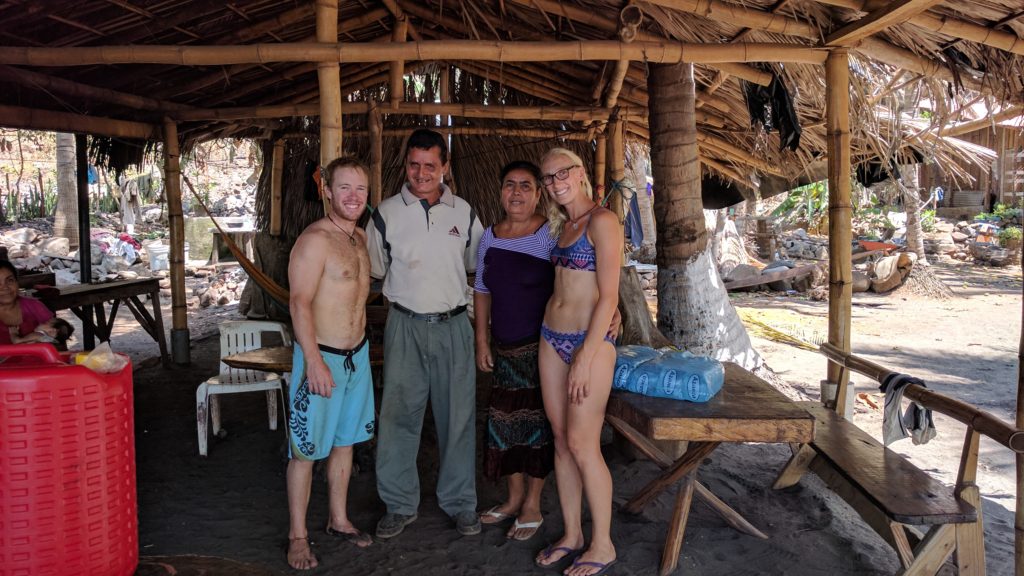 Upon arrival, we were happily greeted by a very loving family who went out of there way to make sure we felt a home. Almost immediately Matt was offered to go fishing the following morning on the owner Antonio’s boat. Unsure if he would be charged, Antonio re-assured Matt that he would just love the company. Matt ended up settling right in helping him change a tire on his boat trailer while practicing Spanish. 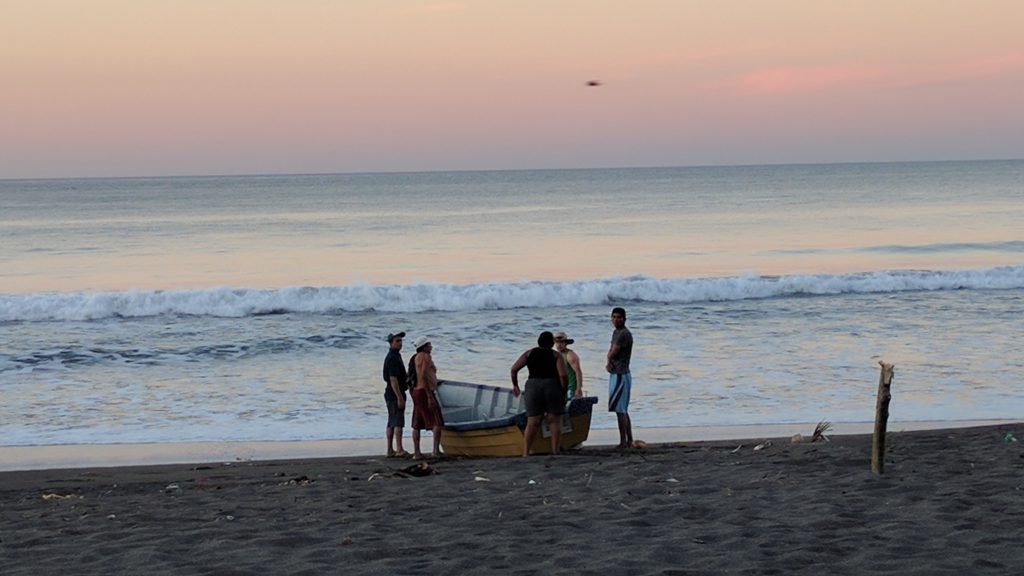 Up early the following morning, Matt was eager to see what the fishing had in store. Antonio and a good friend of his were preparing the boat and with the help of other family members, we all managed to push the boat in to the water. Once buoyant, the trick was to accelerate the boat as fast as possible between sets of waves because they were definitely big enough to cause problems. 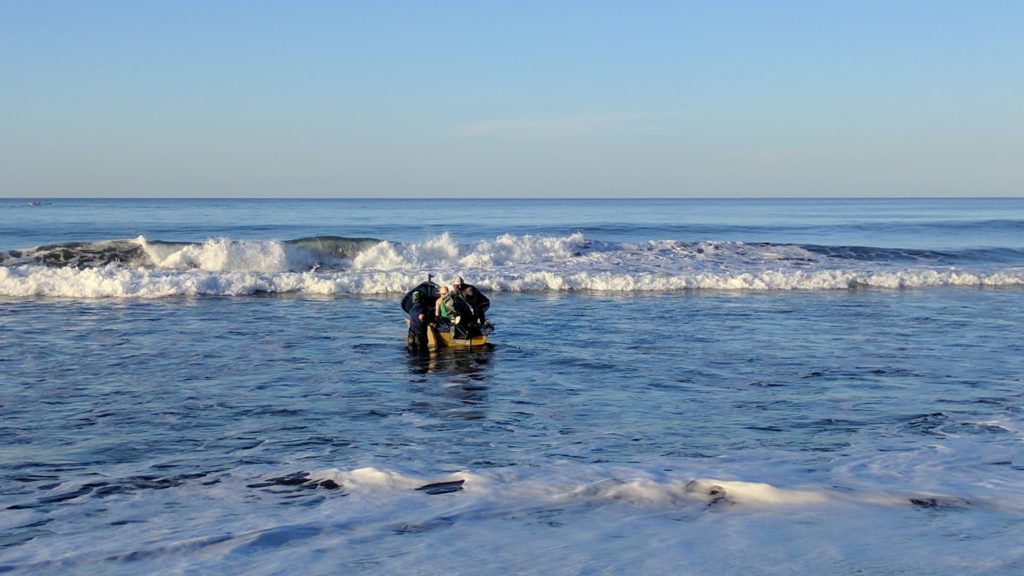 After successfully avoiding the waves, we quickly set to rigging up hand lines to troll with. We used simple rapalas (fish imitating tackle) attached to heavy duty line that were simply wrapped around our hands as opposed to a real. 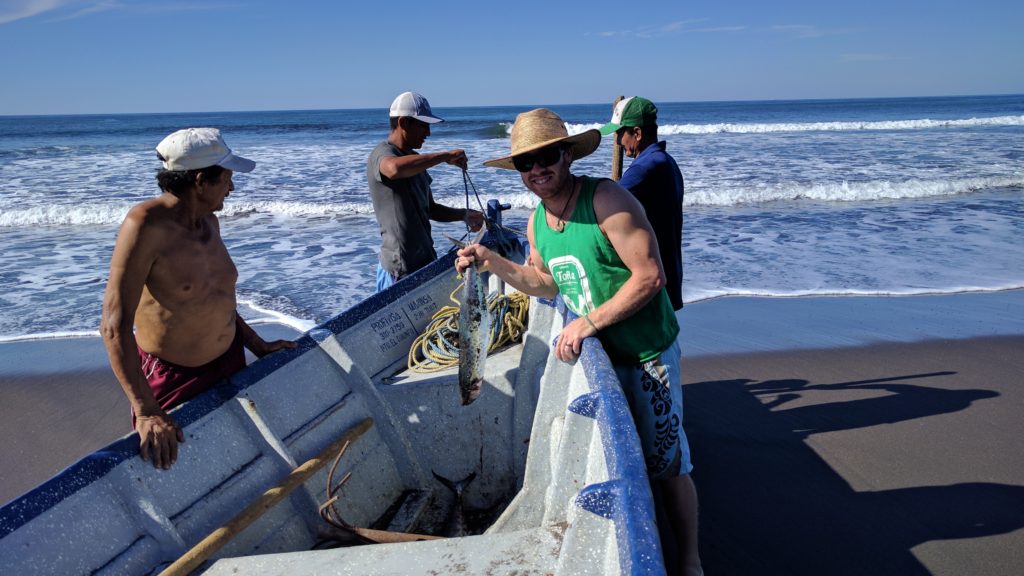 The fish caught for the day were 2 Mackerels by Matt and a tuna by Antonio. Matt was excited about seeing the tuna, and for how small it was, it really gave Antonio a fight. Throughout the time fishing, it became very clear that they were fishing for their food for the day, and if extra was caught they would try to sell it. It was humbling to be on a small local boat with some guys just trying to get by. 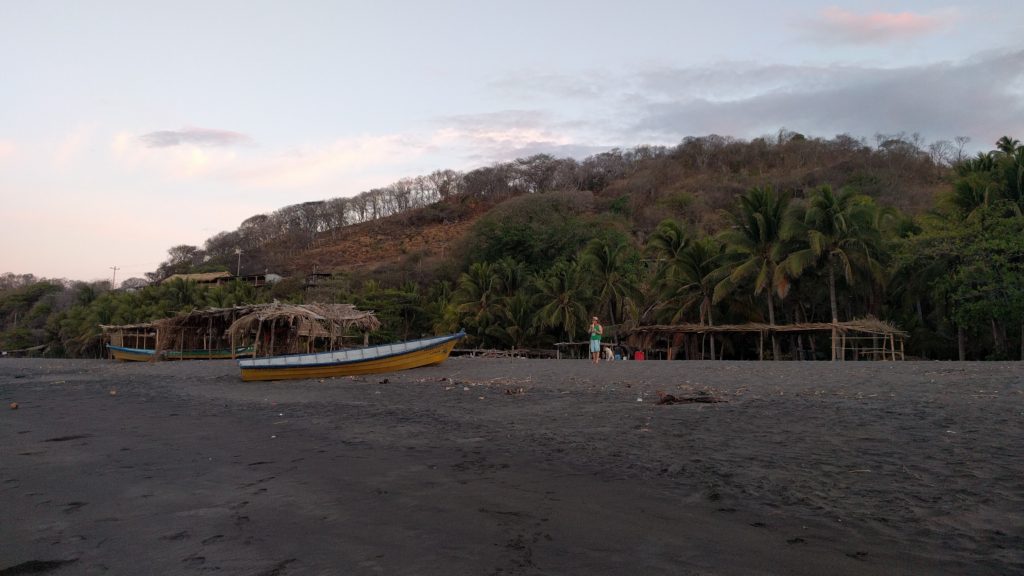 Back on shore, Antonio gave Matt one of the Mackerels. We would only accept it if the family would show us how they cook it and share dinner with us. That evening, we brought out our potatoes and broccoli to share and we had a wonderful dinner with a truly humble and friendly family. 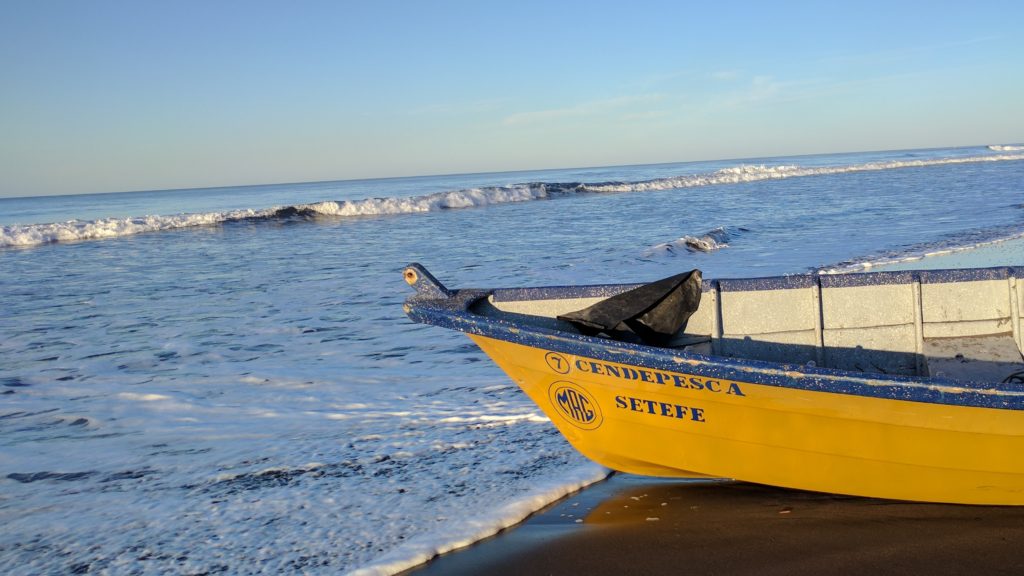 Antonio offered Matt to join him again the following morning on another outing, so another great day of fishing was had. Three Mackerels were caught on this day, and we ended up seeing some dolphins up close. 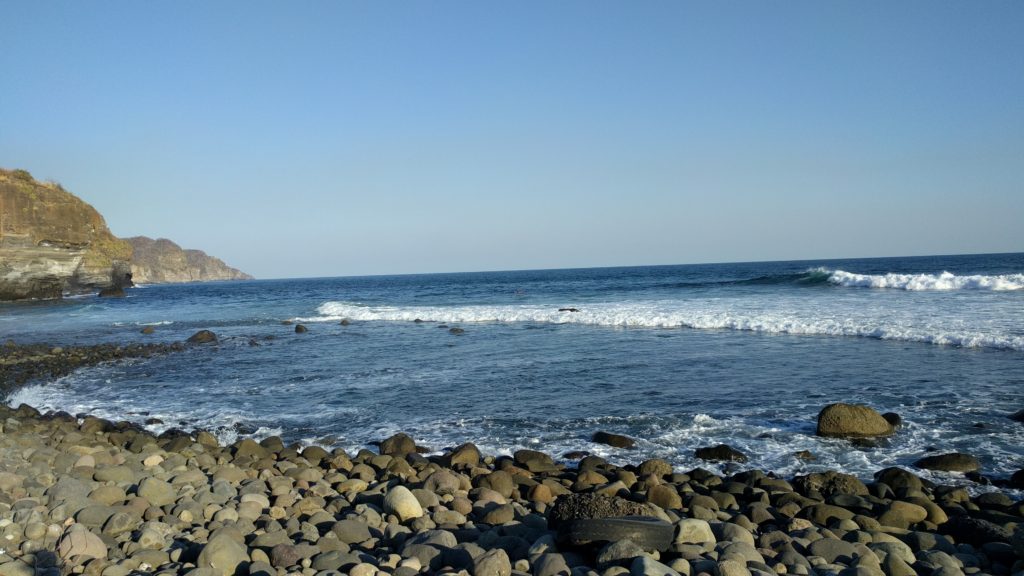 Back on shore, we decided to give some of the famous waves a try. El Salvador is famous for its surfing, and we quickly realized why. The waves are very clean and there are points of rocks that create perfect setups for waves. The rock structures also create great habitat for fish and other marine life. Every morning we could count on seeing fishing boats everywhere either netting fish, or trolling in various ways. 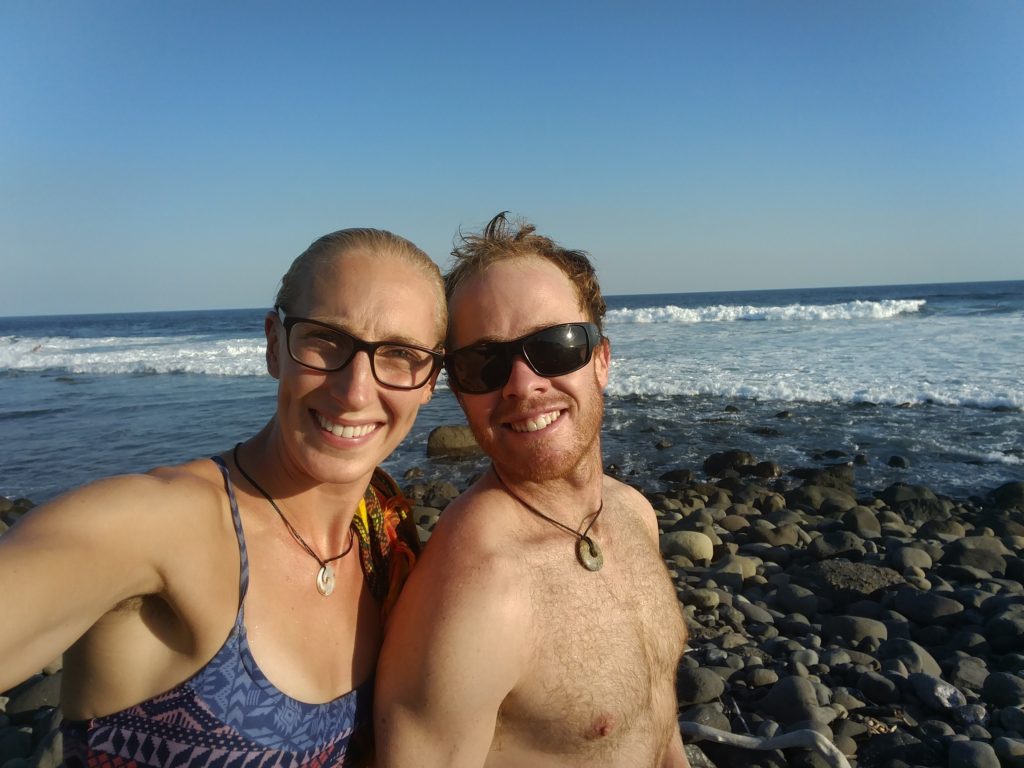 Overall, we had a great first impression of the coast and the locals who’ve been living there for generations. We later found out that in 2015 a large swell came in and completely destroyed the homes and structures close to the water, which included Antonio’s. Everything that we’d seen had been built in the last 2 years. It was amazing to see how they adapted and bounced back from such hardship. 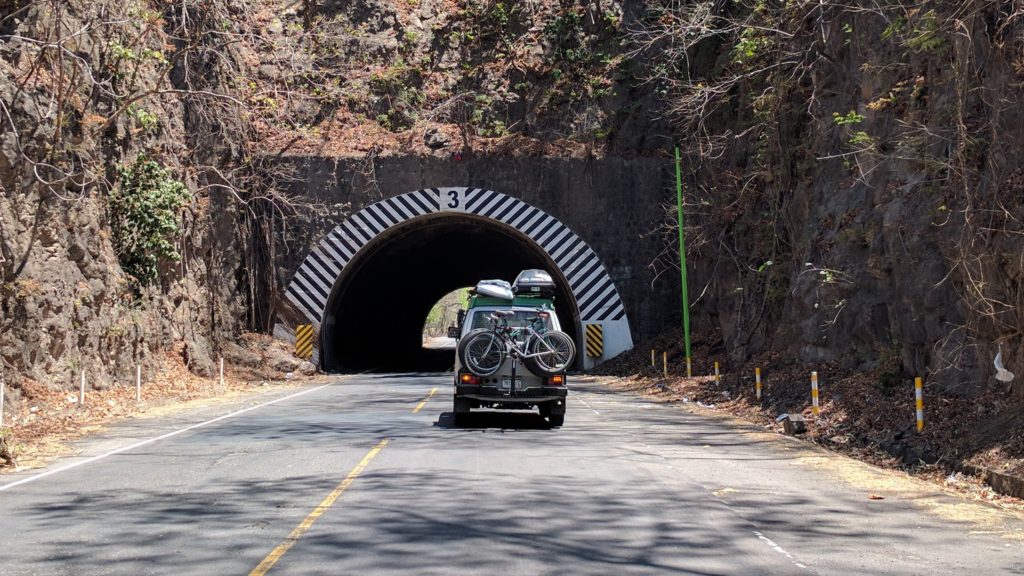 Bidding farewell to this amazing family left us feeling grateful and fortunate to have met them. We will never forget our time spent here with these loving and happy people. 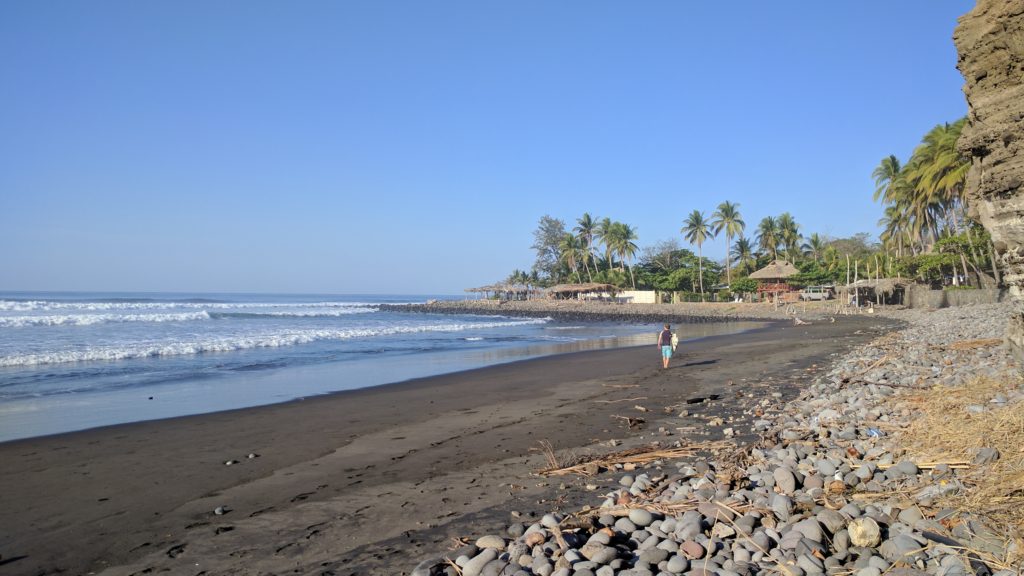 Our next destination was a beach and point break known simply as Kilometer 59 or K59. They have yet another great wave to surf and Matt quickly jumped in to test it out. 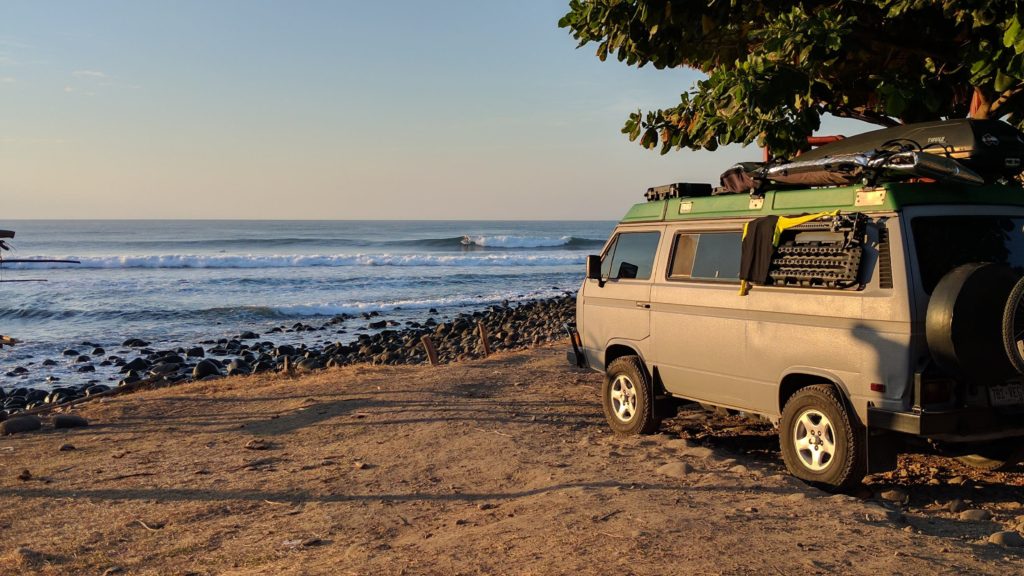 We’d stopped under a tree next to a hotel and the owner loved our van so much he encouraged us to park there for the night and use his outdoor shower, bathroom, and palapa with hammocks. After surfing we chatted to some friendly locals and had a nice night enjoying our beach front views with the van. 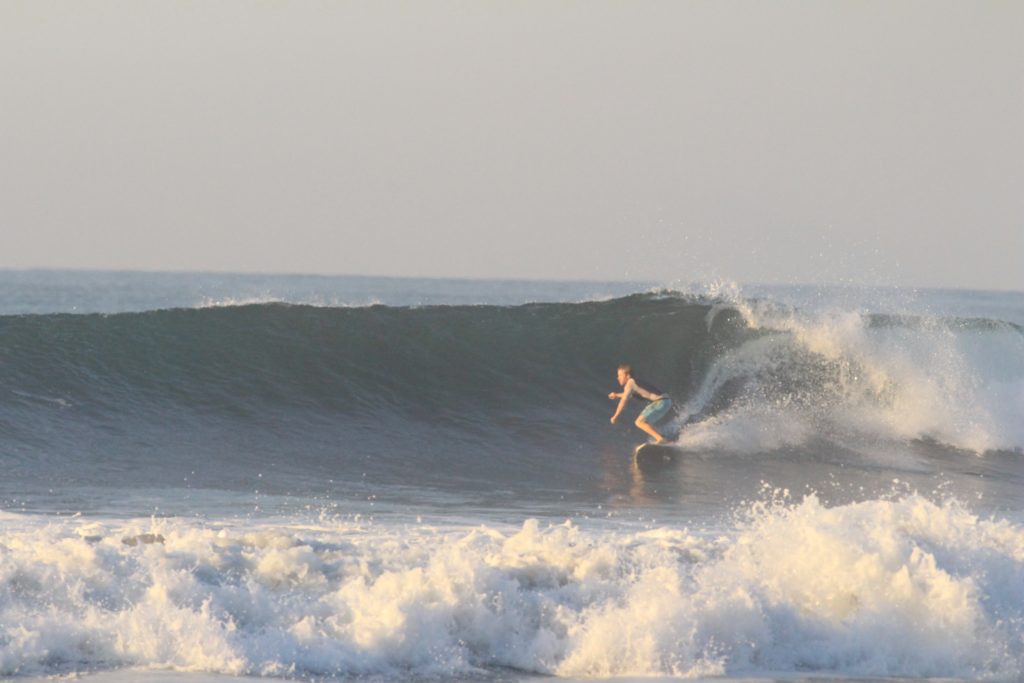 The next morning Matt surfed again and enjoyed the fun, clean waves. Afterwards Matt got whistled at and realized local photographers had set up to take photos of surfers for the morning session. A few good shots had been captured, and since its not everyday you have someone with a nice camera able to get surf photos, we opted to buy some. 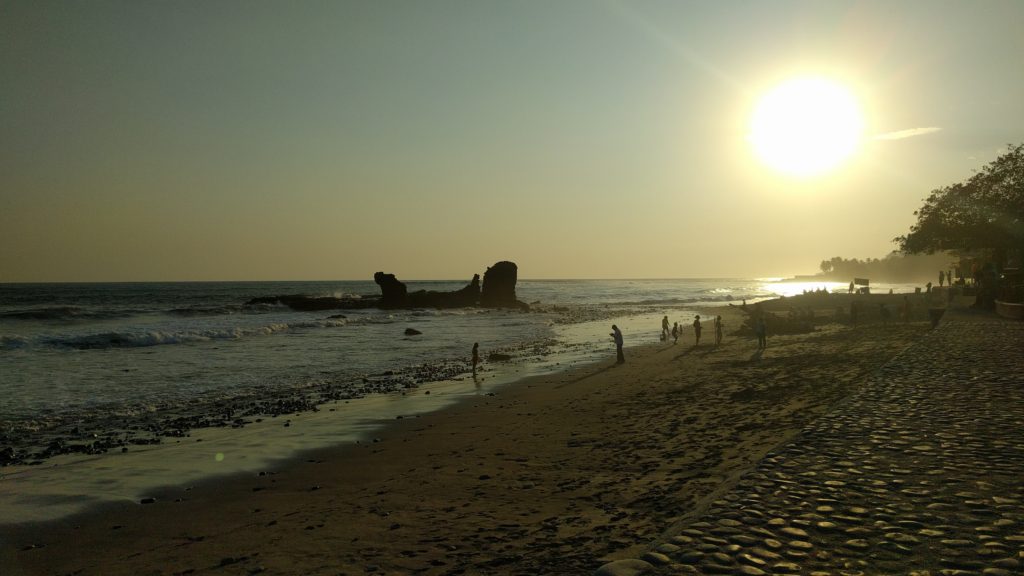 Saying goodbye to a beach we could have stayed a week at, we headed to El Tunco for a few nights. El Tunco is likely the most developed and touristy beach in El Salvador and for good reason. The surf is good (3 different breaks) and it’s absolutely beautiful. 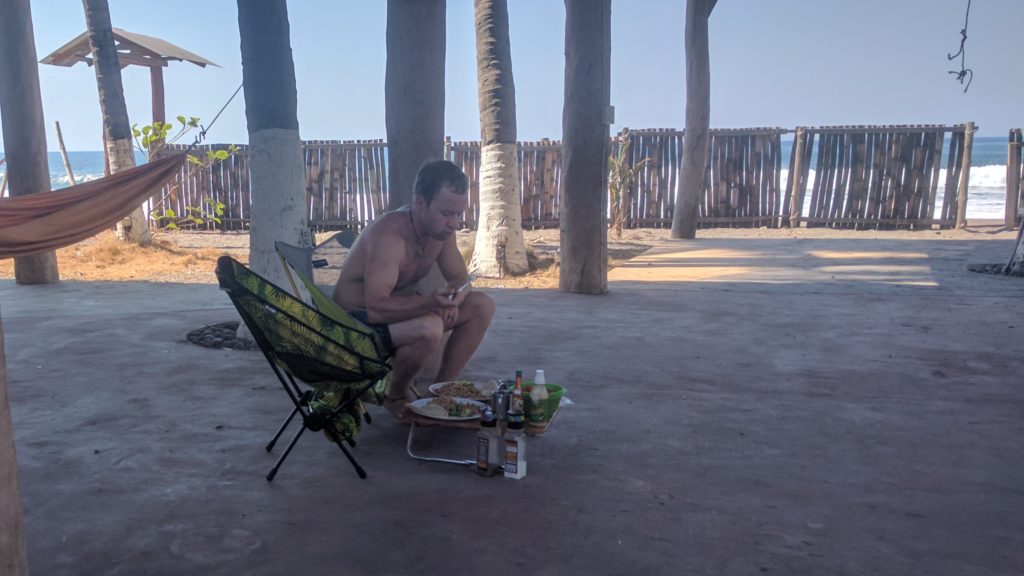 We planned to get a repair done on one of our boards, so we set up shop at a great and affordable beach-side campground. 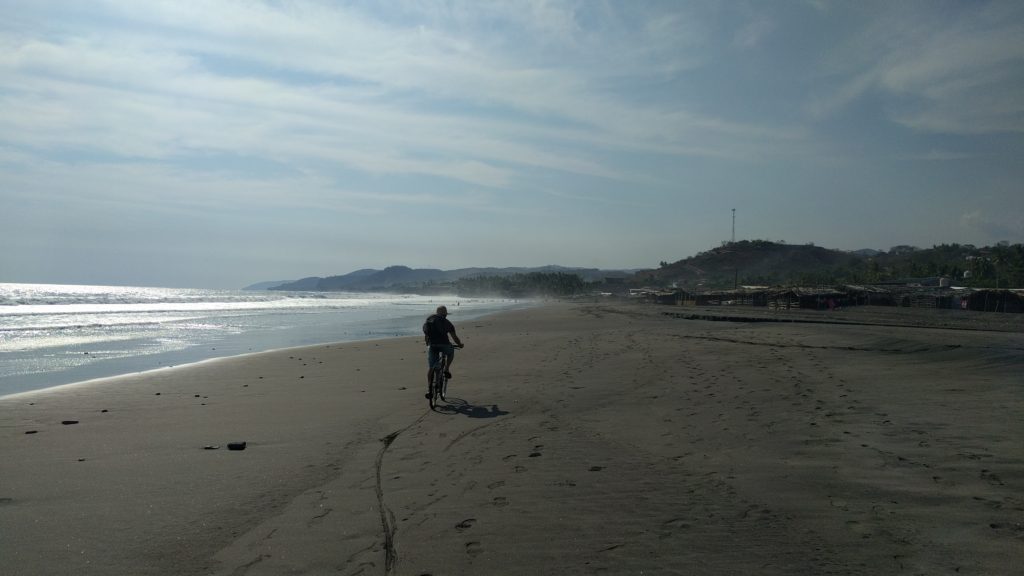 The mornings were filled with surfing while we read and explored during the days. 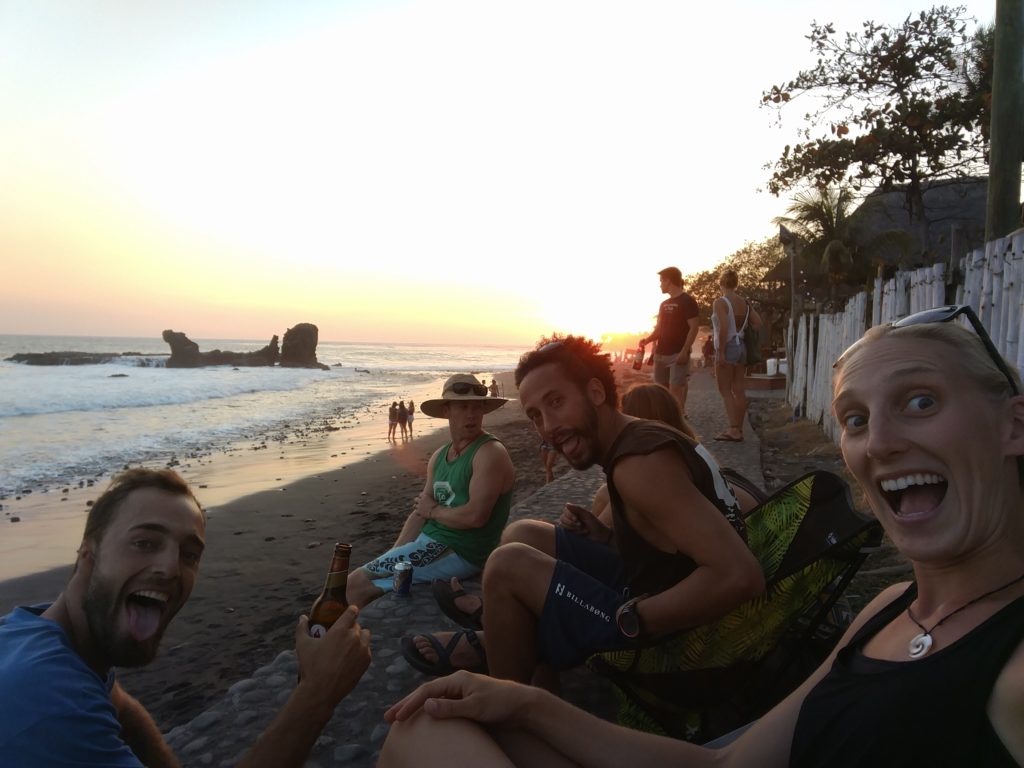 We even met some fellow over-landers on motorcycle from Colorado and shared a few beers together during an amazing sunset.

One day, we road our bikes to the next town over, La Libertad. We’d heard there was a fresh fish market and good surf, so we wanted to check it out. 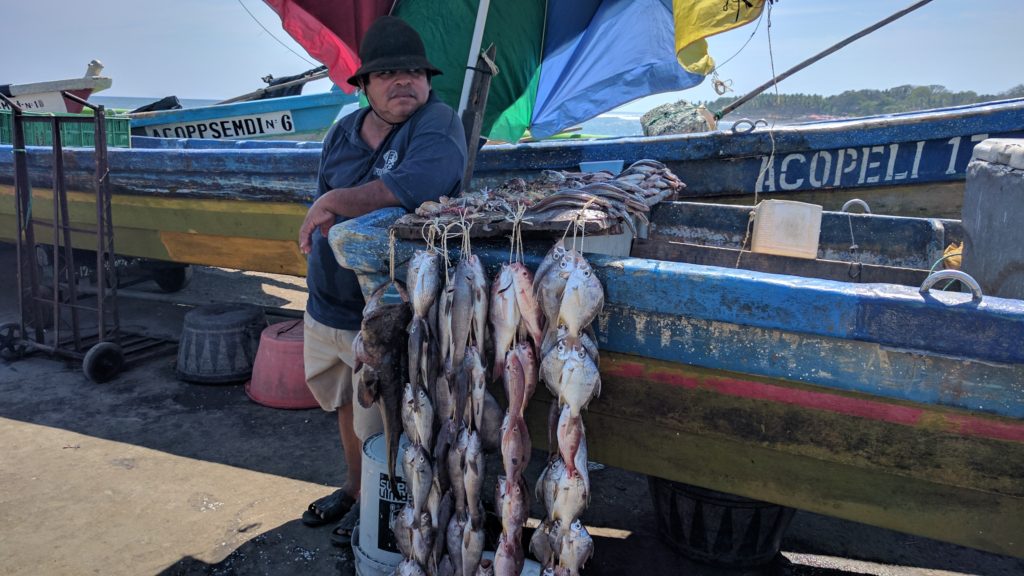 The fish market was one of the coolest operations we’ve seen. When fishing boats come in towards the pier they are lifted by crane onto the deck of the pier. 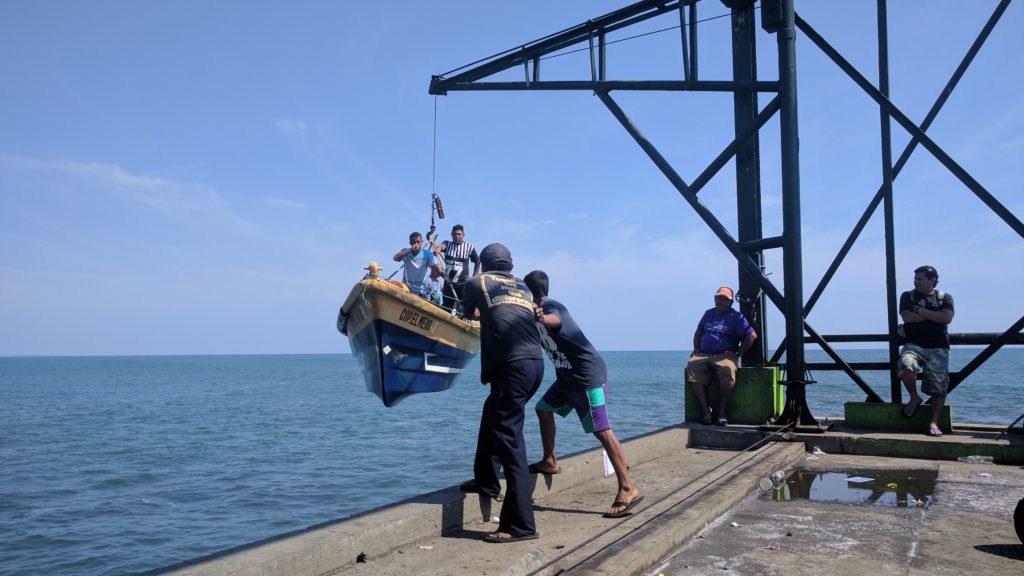 The boat rests there for a few minutes and whoever was there waiting was able to buy fish directly from the fisherman. As fresh as it gets! 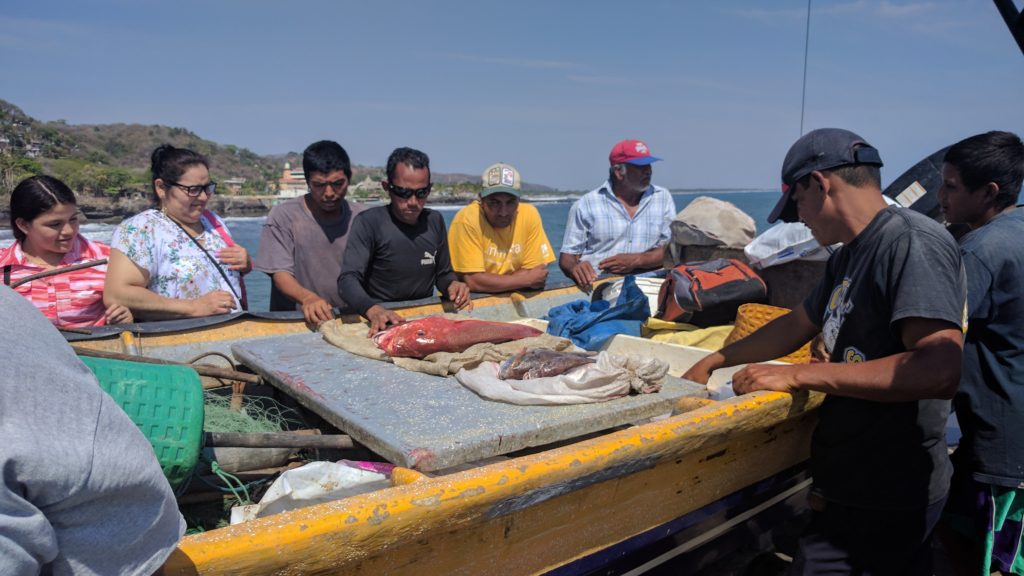 Afterwards the boats were stored in whatever space was available on the pier, and the rest of the catch was sold to vendors just 30 meters away. These vendors were in a shaded market selling everything you could think of from the sea. 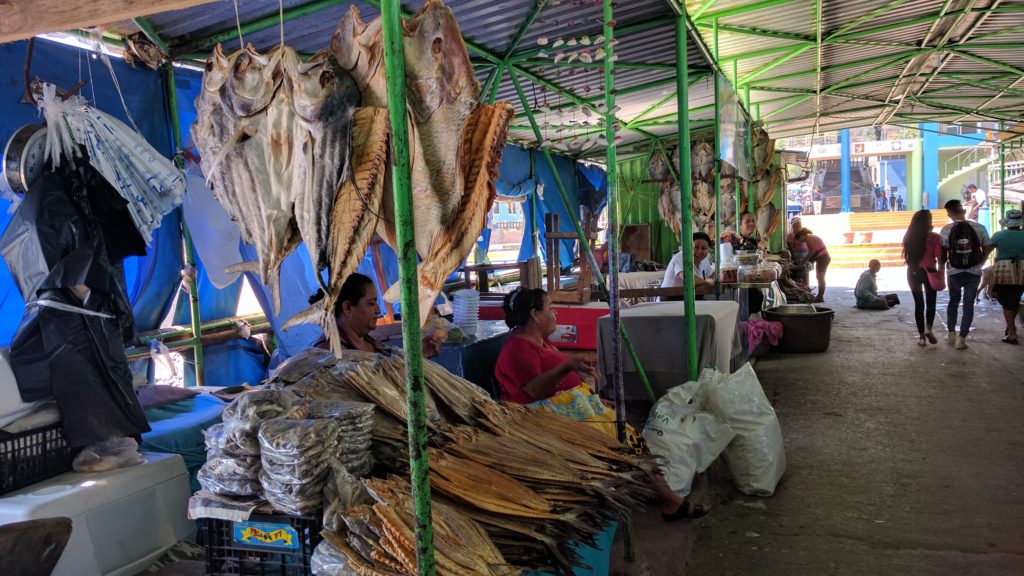 After our board repair was complete, we packed up and planned to head towards the lesser-known southern town of El Cuco. 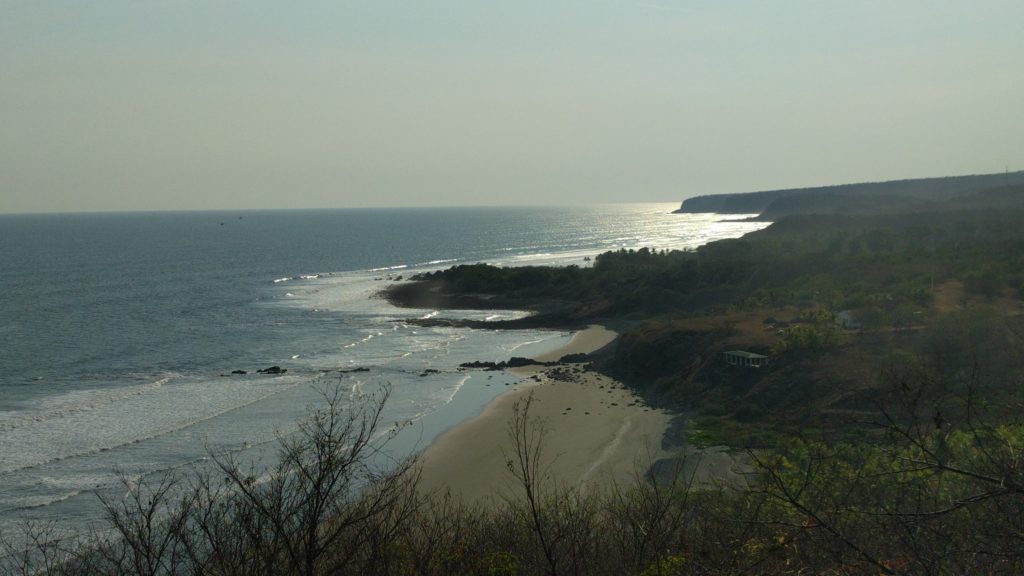 Here we could access the even further and more remote Punta Mango surf break. 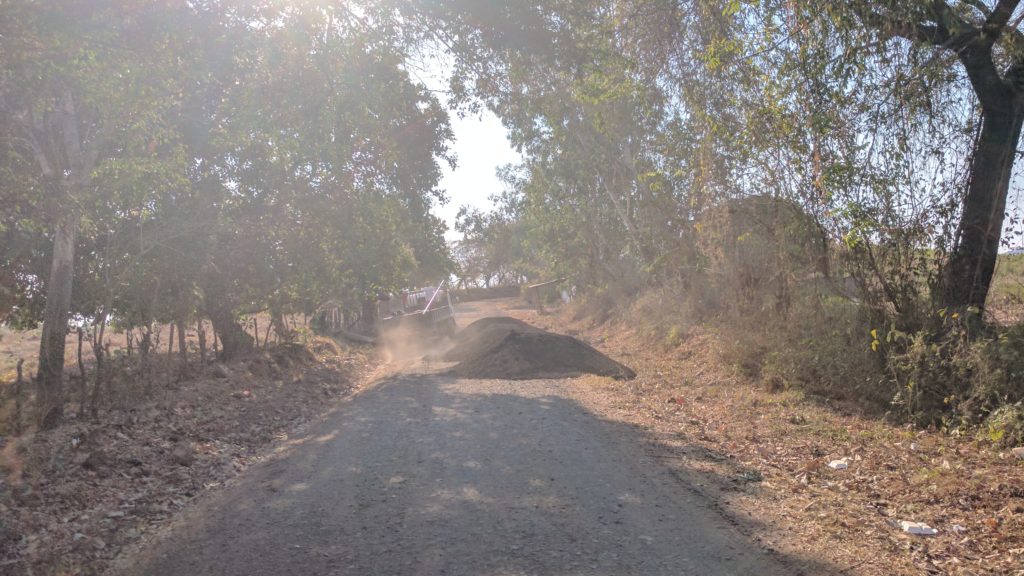 The roads were rough to get there, but they held the swarms of surfers at bay, and we were treated to nearly empty waves on a barren coastline with minimal infrastructure. 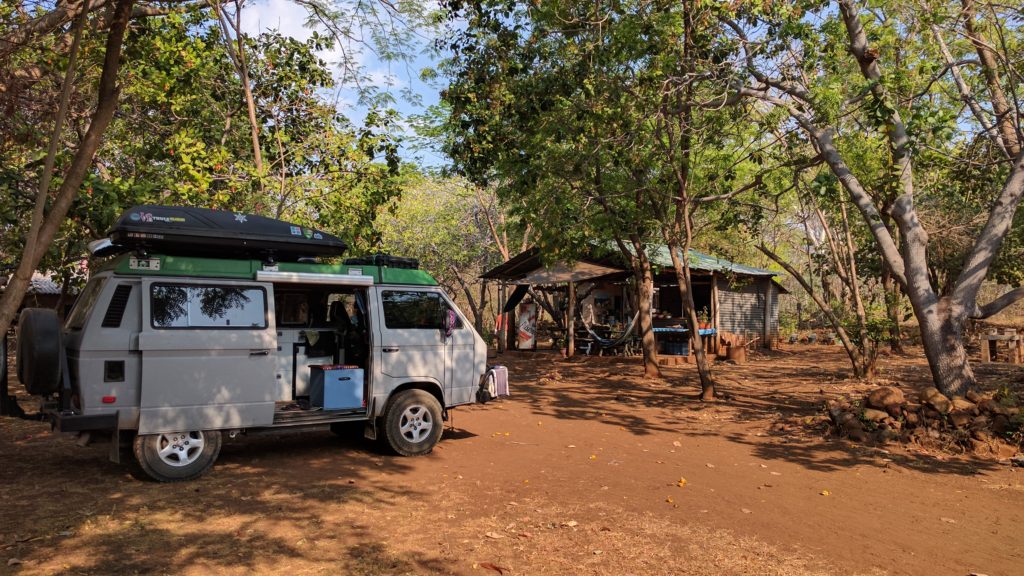 Rancho Mango was our parked home for two nights and we thoroughly enjoy the tranquil scene. The lady who manages the little area was a pleasure to speak with and cooked Matt one of the best pizzas he’d eaten in a while. 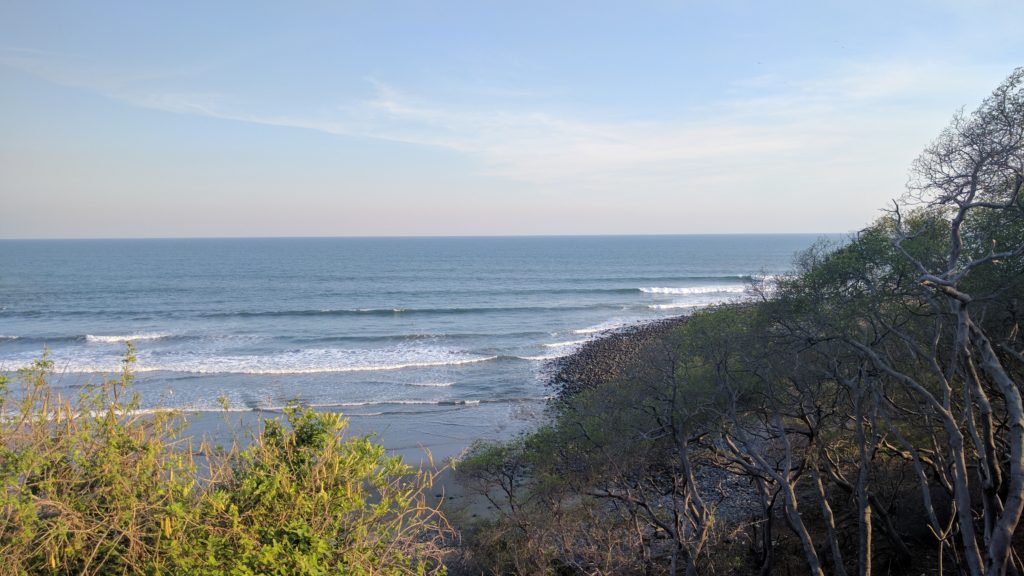 Sarah was able to catch her first real wave and Matt enjoyed the surf for which the point is famous. 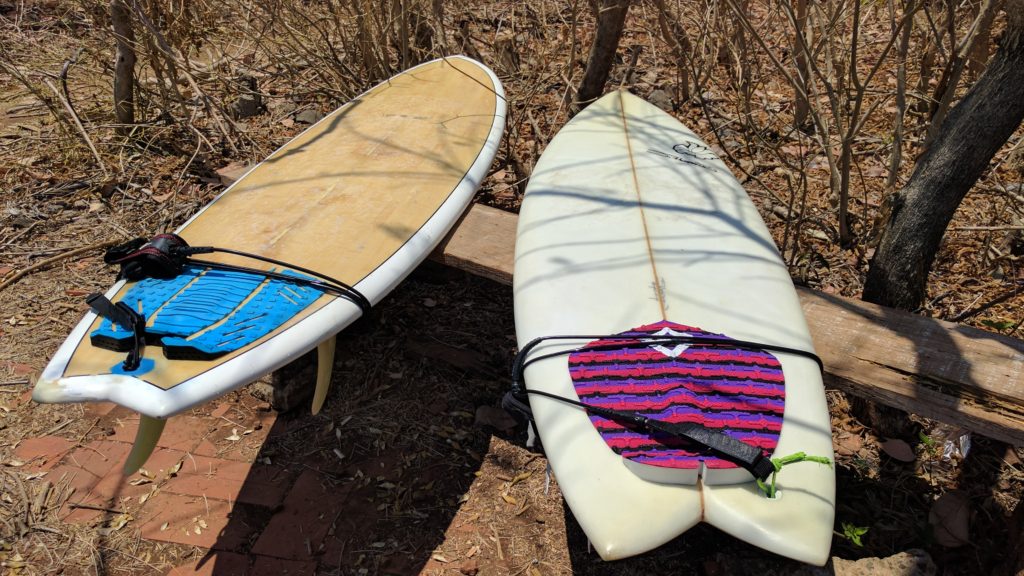 After our days in Punta Mango, we decided we were ready to push south through Honduras into Nicaragua. El Salvador, despite it’s tumultuous history, proved to be a great place to visit and we will remember it fondly. Onward Koru goes!

4 thoughts on “Beautiful Coast Lines, Casting Lines, and Riding Down the Lines”