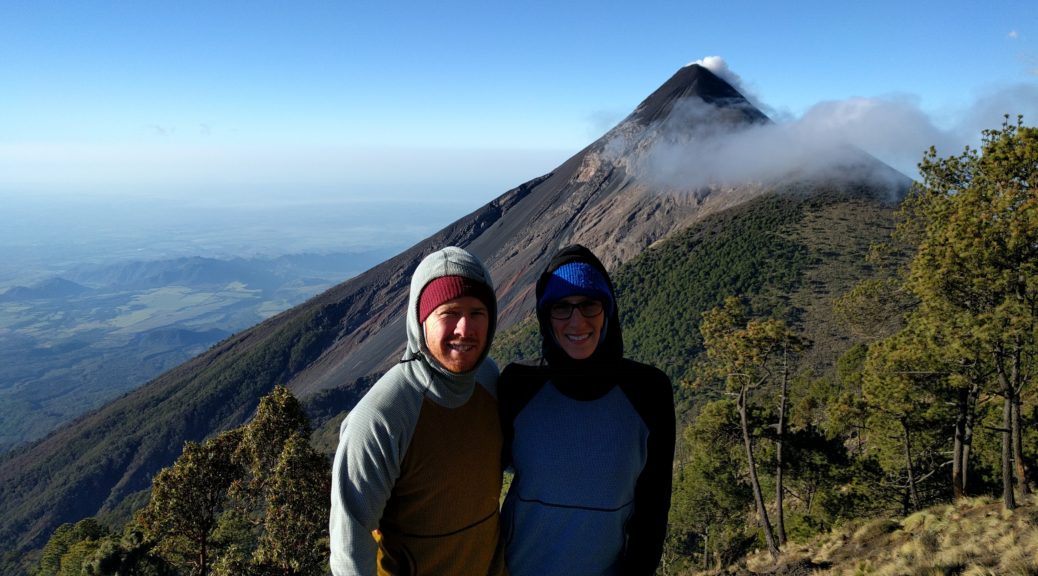 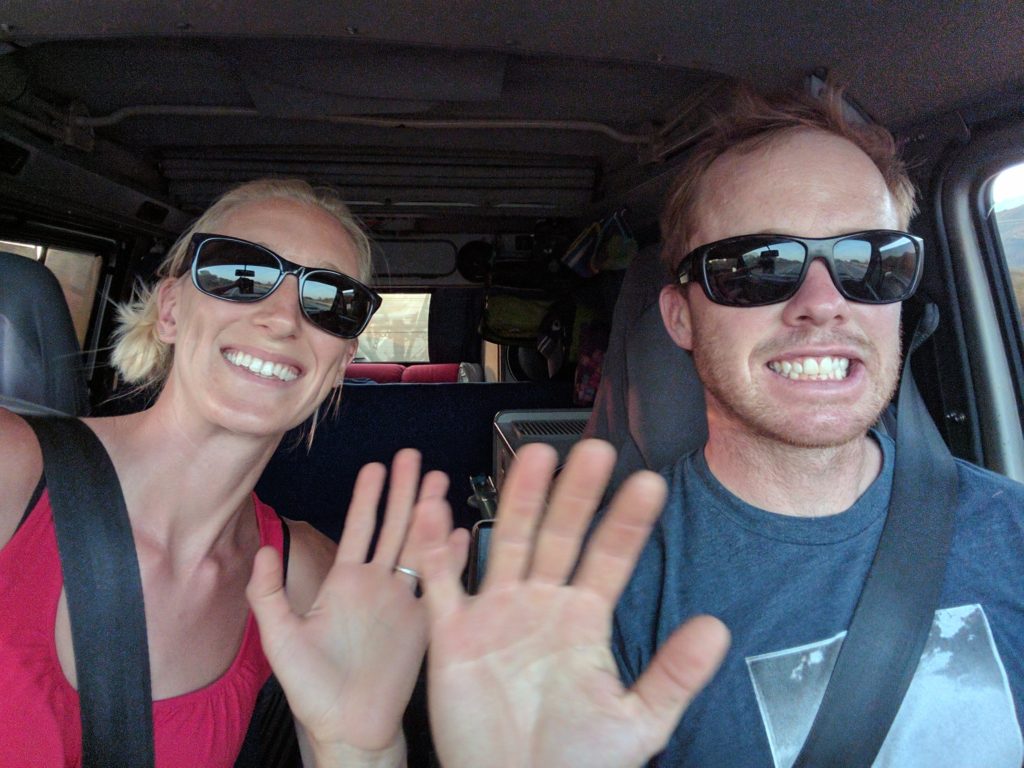 After our time spent on the Oaxacan Coast, we were ready to discover our fate at the Guatemalan boarder. Our vehicle permit had expired and foreign vehicles have to exit Guatemala for a minimum of 90 days before being allowed re-entry. We hoped luck was on our side, due to the fact we took out a ‘temporary exit permit’ when we left Guatemala to visit Mexico again. Our permit was now expired and we hoped to just ‘ghost’ Koru across, with our permit sticker already in-place. 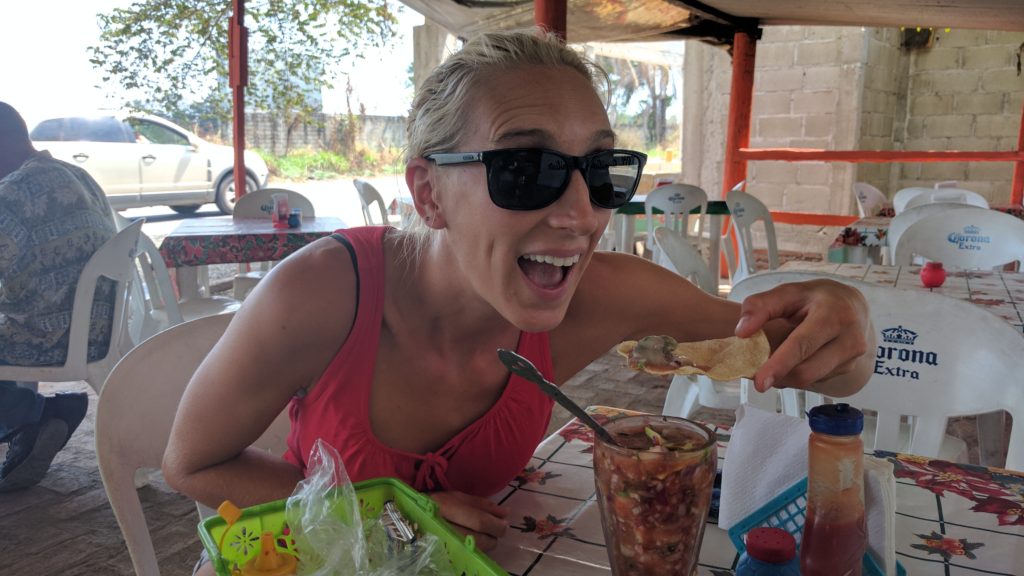 Full of nervous energy, we made our way towards the border, but first had to stop for a quick “last Mexican ceviche” on the road.  Though we have no photos to share, we can happily report that we successfully crossed back into Guatemala! We had luck on our side because it was a busy Friday afternoon at the very disorganized border city of El Carmen, Guatemala. The customs official briefly glanced at our expired paperwork without looking at the dates and waved us through. A huge sigh of relief came over both of us and we drove away from the border full of emotion and excitement. We officially could look forward to revisiting Guatemala and continuing our trip through the rest of Central America into South America. Koru ho! 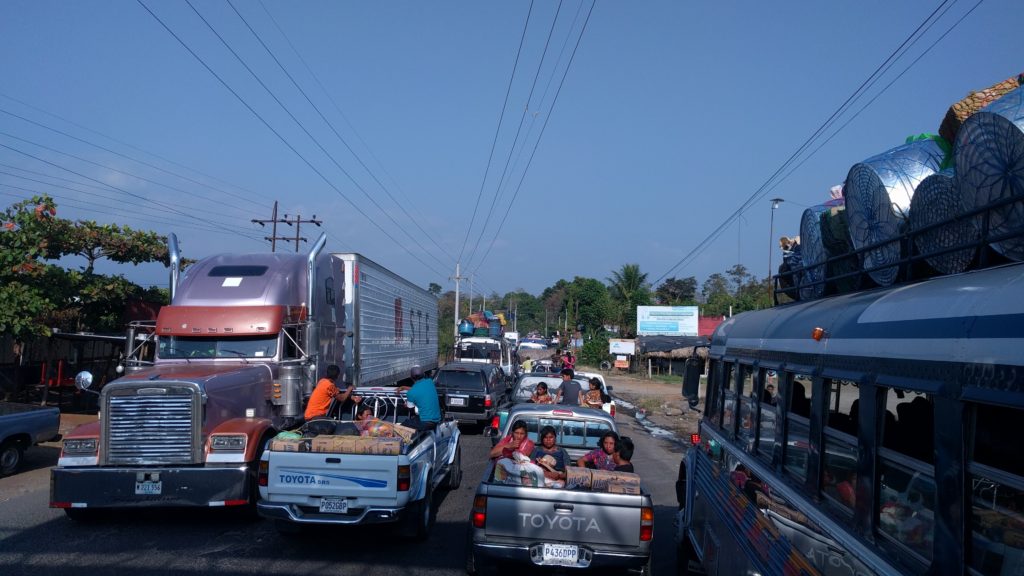 Our first night back in Guatemala found us at another hotel parking lot where we could mull over what we wanted to do with our second visit. 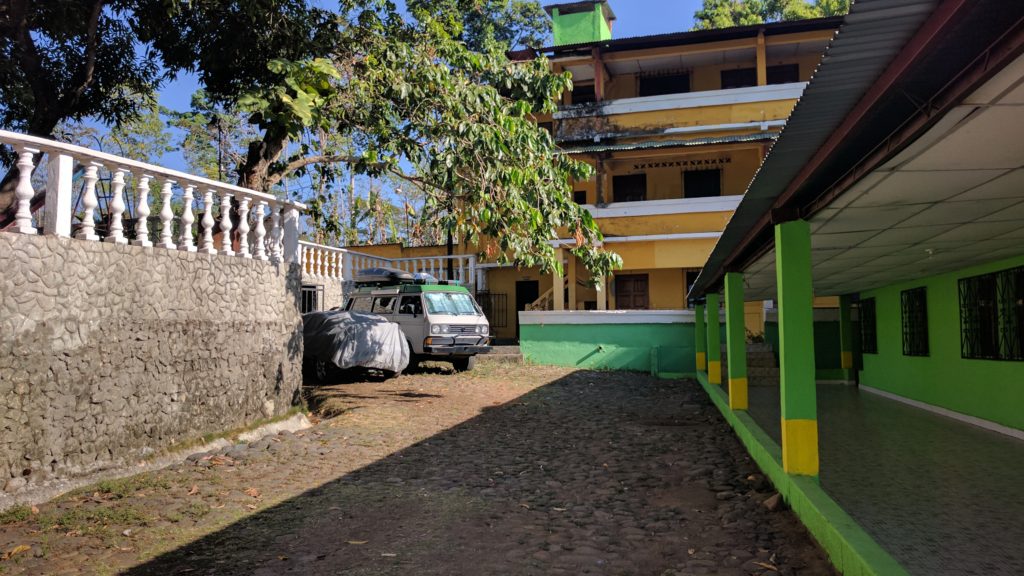 We opted to return to Antigua to climb the famous Volcano Acatenango that we’d missed the first time around. We stared at this volcano for 6 weeks while working at the Earth Lodge, so we felt compelled to climb it since we’d made it back into Guatemala successfully. 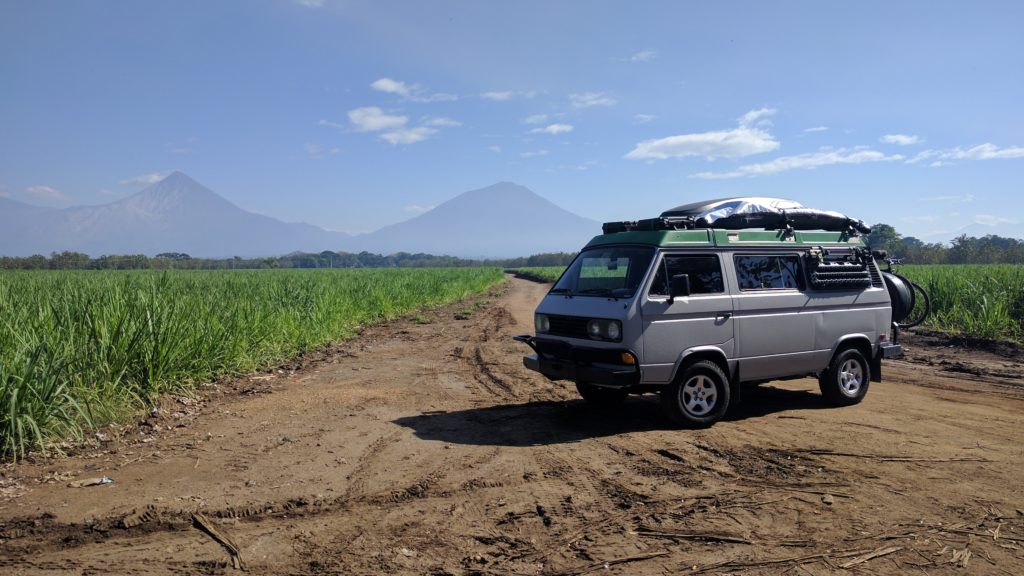 Upon arrival to Antigua, we needed our favorite coffee fix and headed to Fernandos Kaffee for one last cup and a bag of coffee for the road. 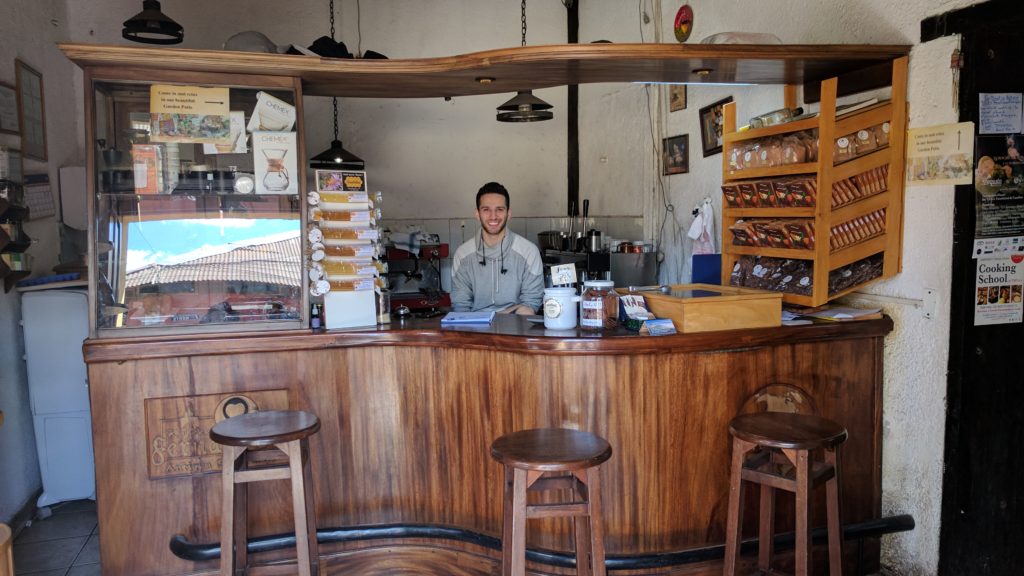 We happened to be in Antigua on a Saturday where a new garden/eco-farm was having a party.  While we were getting excited for the big climb the following day, it was great to see familiar faces from the Earth Lodge as well as folks from around Antigua we had previously met while dancing to great bluegrass music and drinking good beer. 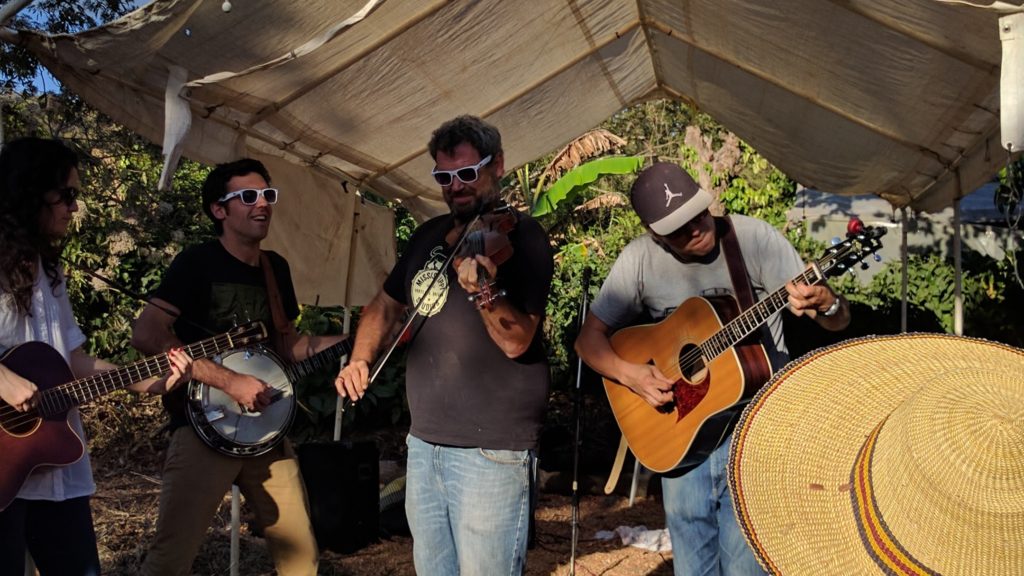 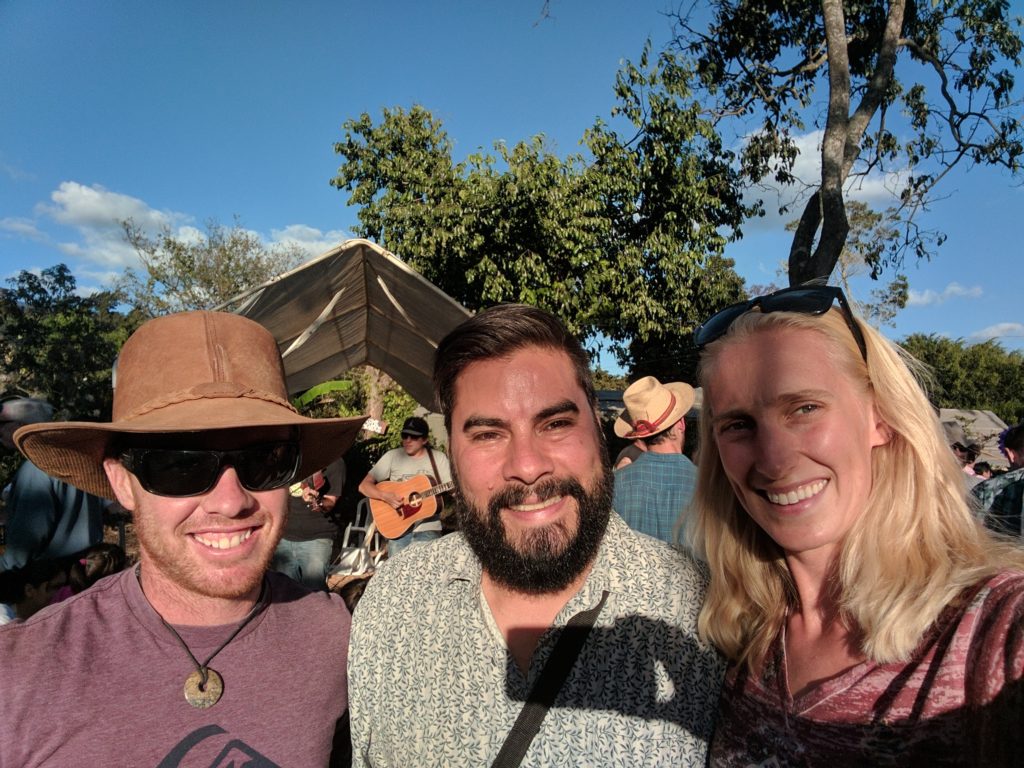 The next day, we headed towards the trail head for Acatenango.  Driving into the little village, a local offered us a place to park and suggested following a group that was being guided. Most people ascend Acatenango with hopes of seeing Volcano Fuego erupt, one of 3 active volcanoes in Guatemala. 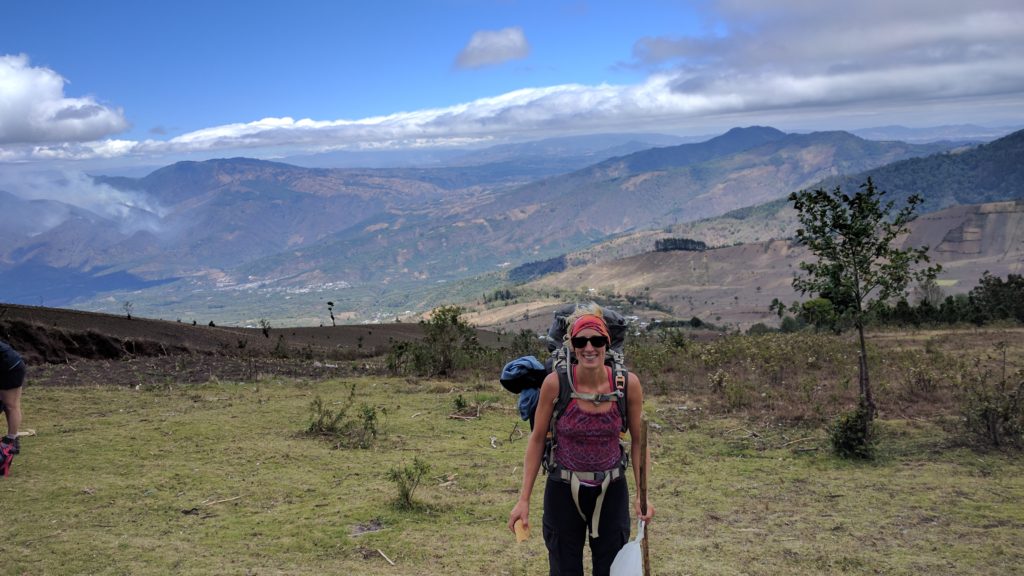 The hike was stunning. We hiked in with our camping gear and some food with plans to camp near the summit of the Volcano. It began in the highland farms of Guatemala where we could see views that stretched the horizon. 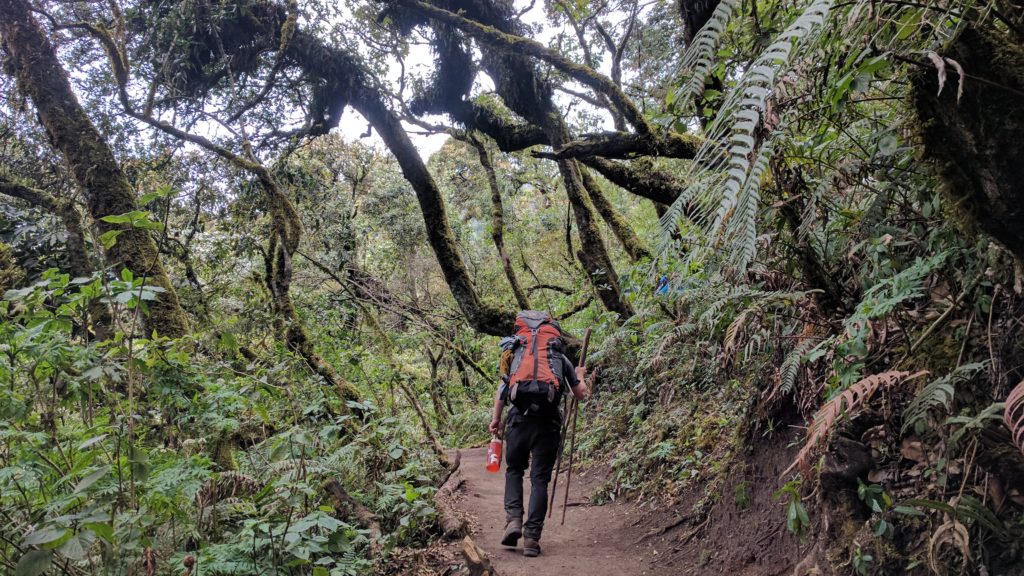 Shortly after the farmland, we headed into a temperate rain forest in a thick dense fog.  The trees and environment reminded us of the Hoh Rainforest in Olympic National Park and sparked memories of our journey to the Pacific Northwest just a short/long 8 months prior. 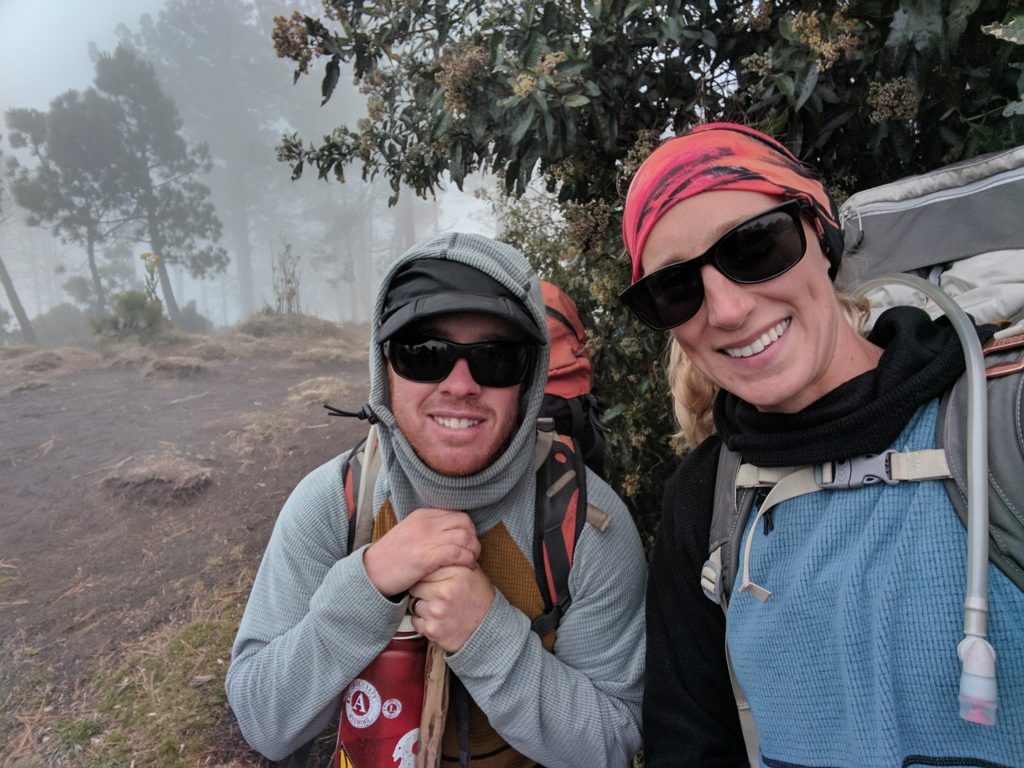 After hours of hiking through dense fog, we arrived at our camping location hoping the clouds would lift. It finally did after we’d set up our camp without realizing what was around us. And wow, what a treat it was! 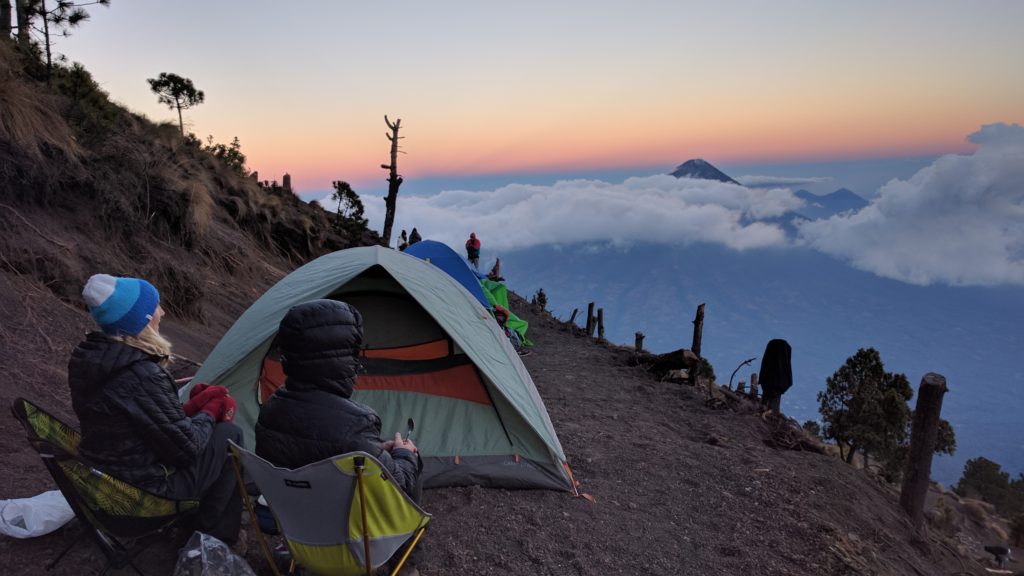 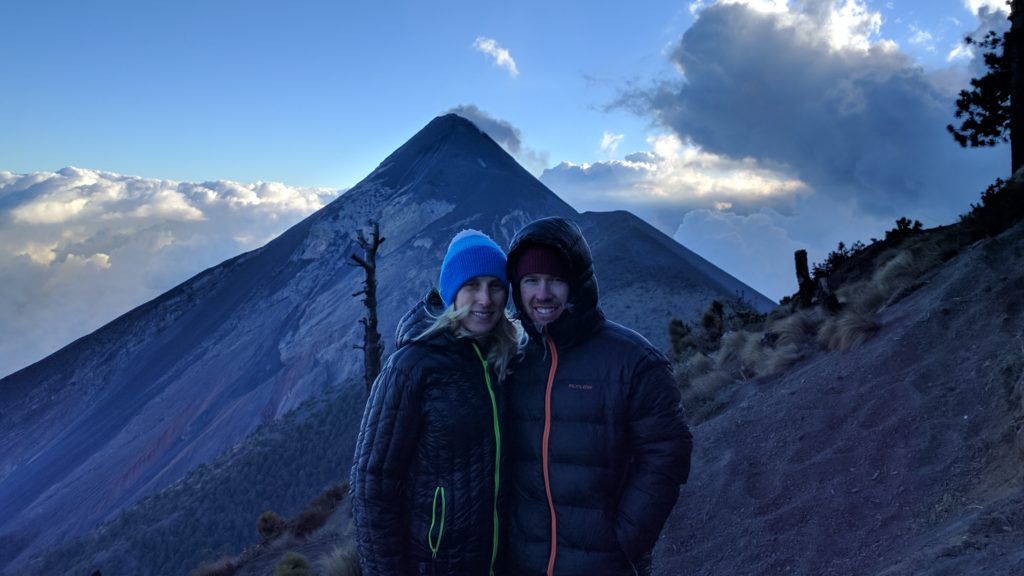 Unfortunately for us, Fuego had gone into a slumber this particular week, so we didn’t see any lava up close, but with such an amazing and far reaching view, we saw Volcano Pacaya in the distance erupting.

The following morning we up at 4:30a to make the summit ascent and man was it cold. Reaching a height of over 13,000 ft above sea level, it was the coldest we’d been since leaving Colorado. The sights from the top were literally and figuratively breathtaking. 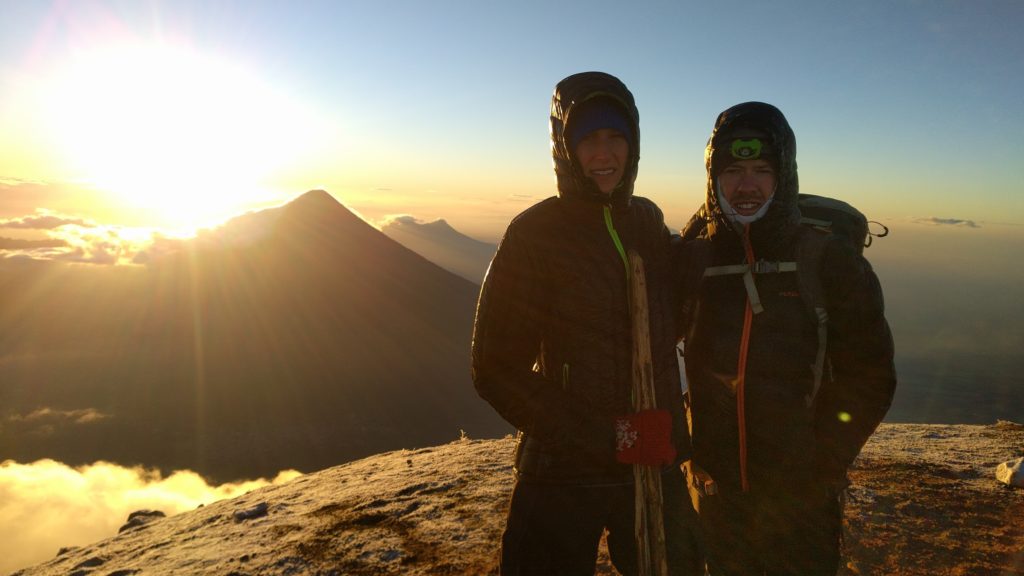 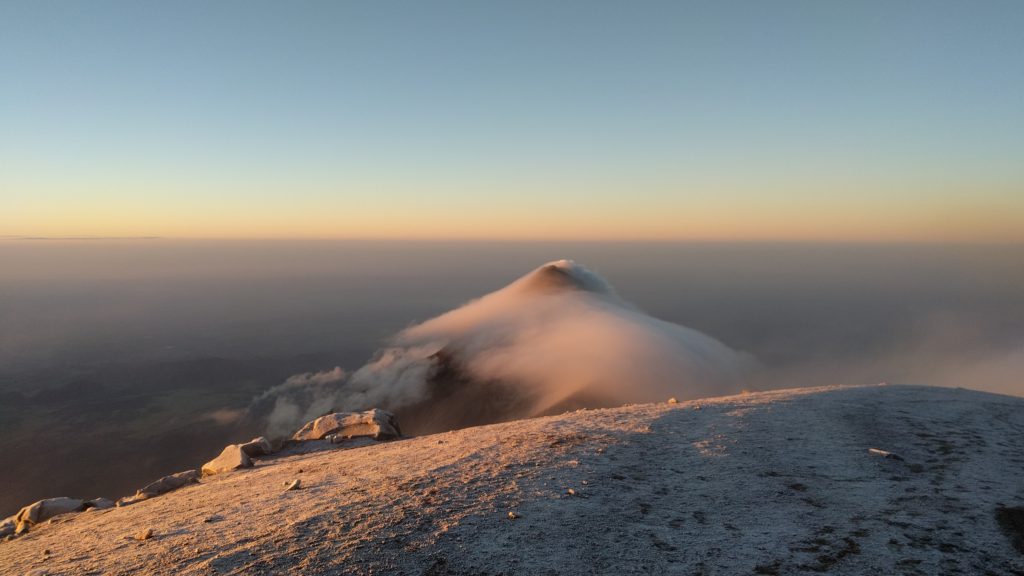 In this next photo, there was so much frozen moisture in the air that when you put your back to the rising sun, a halo was created with the viewers shadow projected in the middle.  Pretty neat. 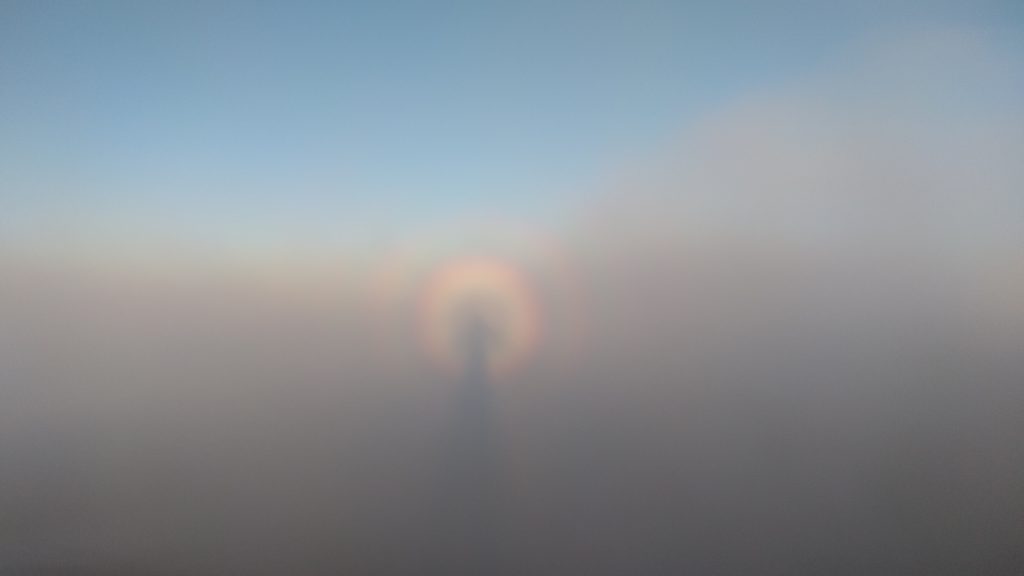 With ripping wind and frigid air, we cherished the sights and took cold-hand photos for about 15 minutes before the speedy descent down through the volcanic scree. We ate breakfast and packed our camp up quickly so we could head to the beach. 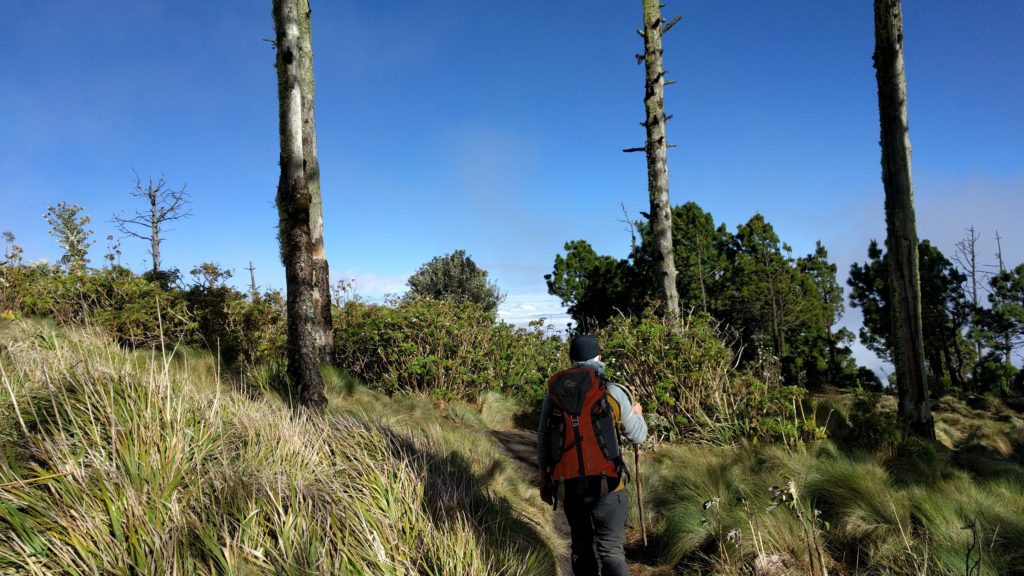 Our plans were to revisit Playa Paredon and see our good friends John and Theresa again. It was wild to know we’d be back beach side just 3 hours after the cold air and high elevations. 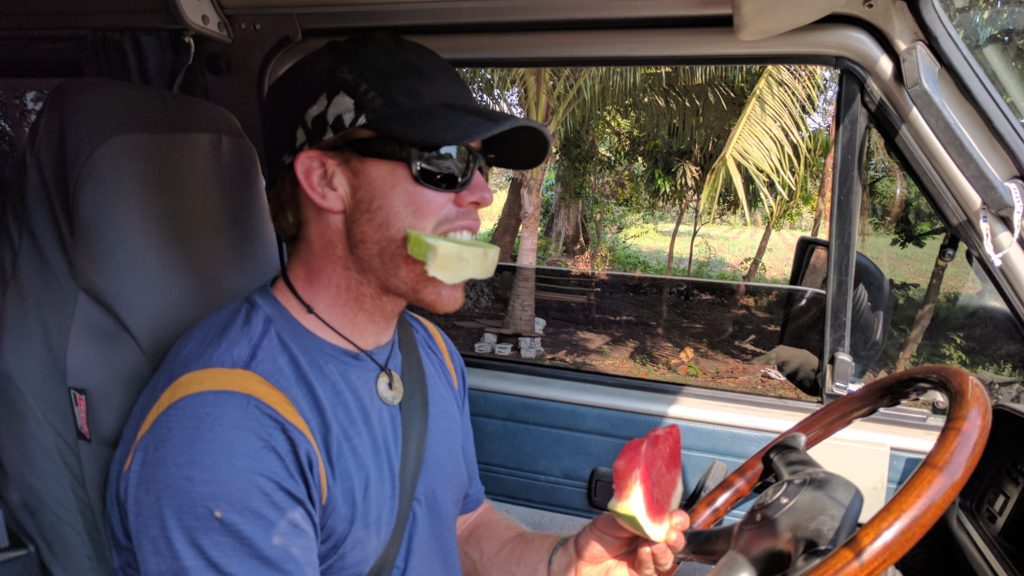 Buying supplies is always fun on the road. It’s melon season and every vendor gave us a sample as we bought up tasty fruit from our windows! 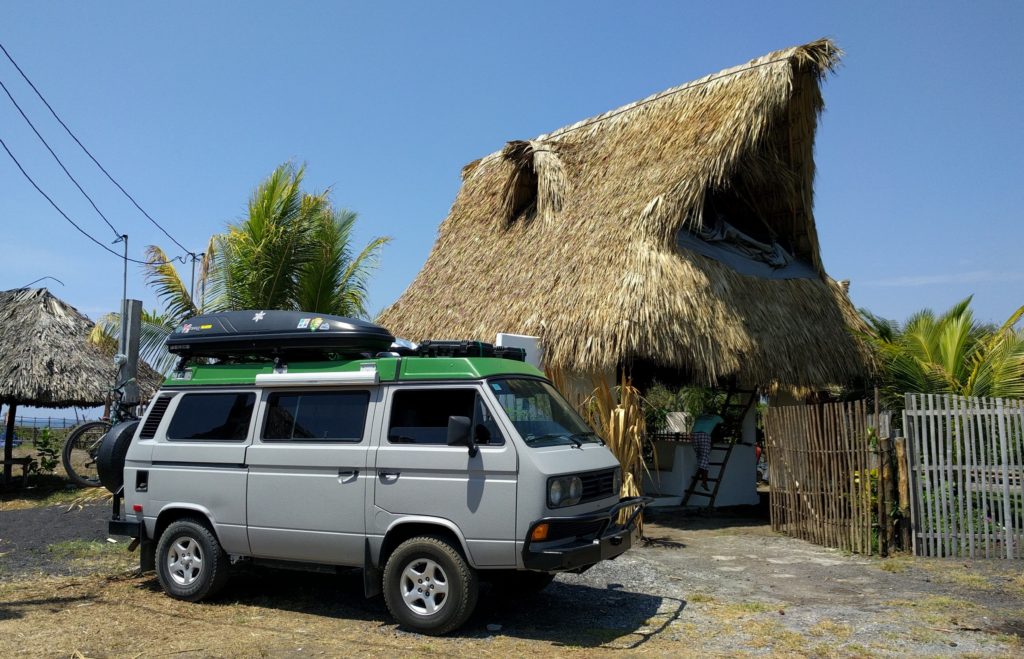 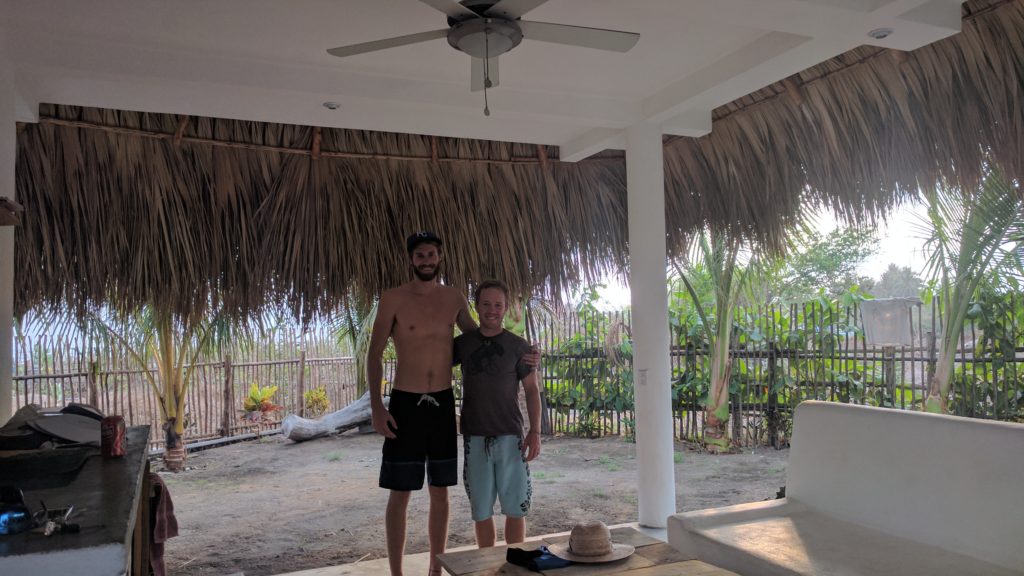 We can’t thank our kind friends enough for allowing us to use their amazing little Paredon beach house with shaded and safe parking for Koru. We arrived on a Monday and had the place to ourselves until Friday when they arrived after a week of work. It was great to see good friends again and enjoy the beauty of a great surf beach! 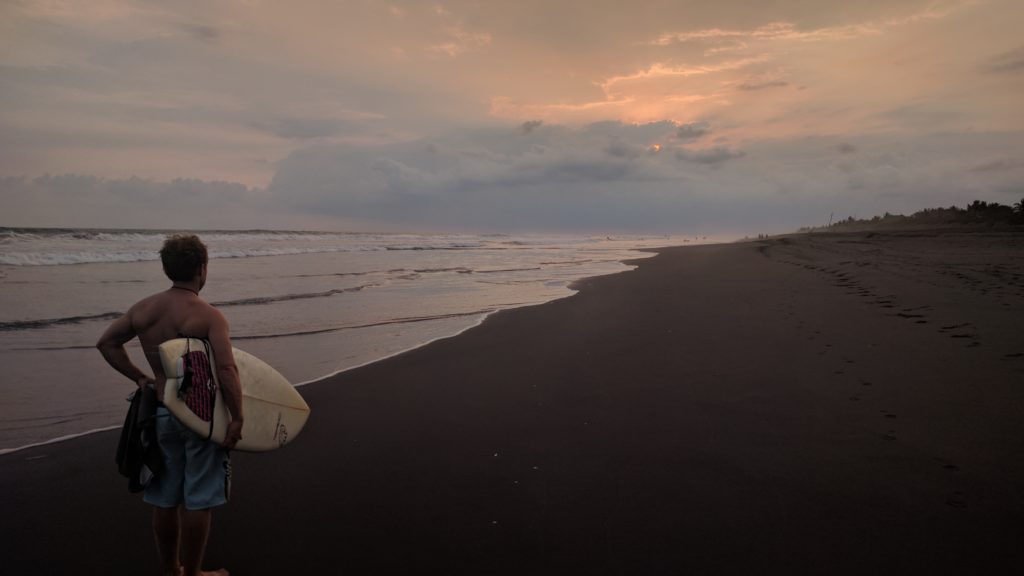 The time came for us to leave, and put our sights on our next destination, El Salvador!  It was a quick 2 hour drive to the border, and we were quite curious to see what customs was going to think of our van ‘ghosting’ tactic when we came back to Guatemala. Customs gave us confused looks about what we had done, but according to their system we were out of the country already, so they said good day and had us head on over to El Salvador with no hassles or fines! 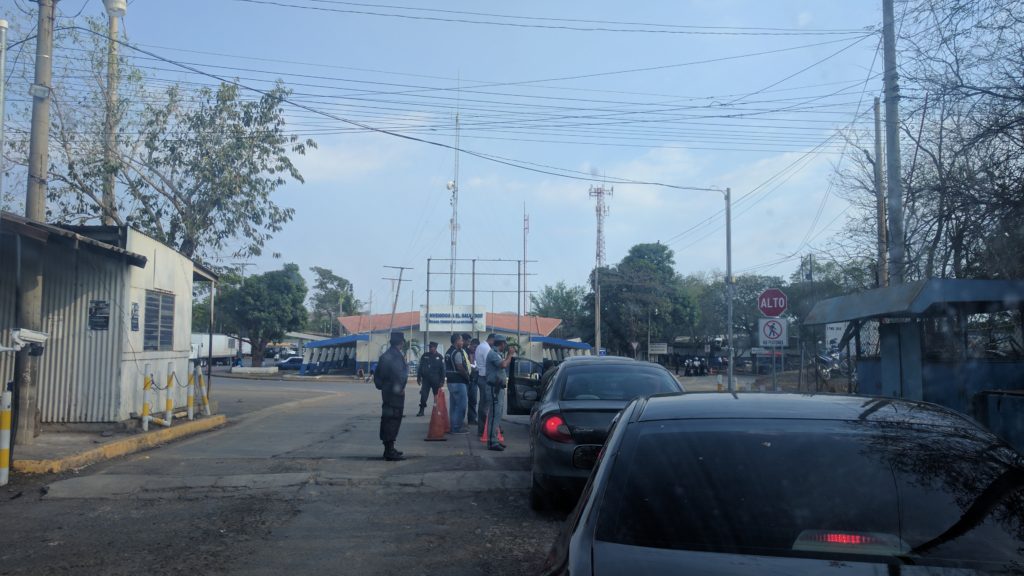 Upon arrival to the Salvadoran side of the border, every employee was very friendly and took pride in their country, handing us tourist pamphlets and maps while boasting about all the great things El Salvador had to offer.  We proceeded with our paperwork, and although it was quite a slow process, we made it through with no issues.  Let the adventure continue! 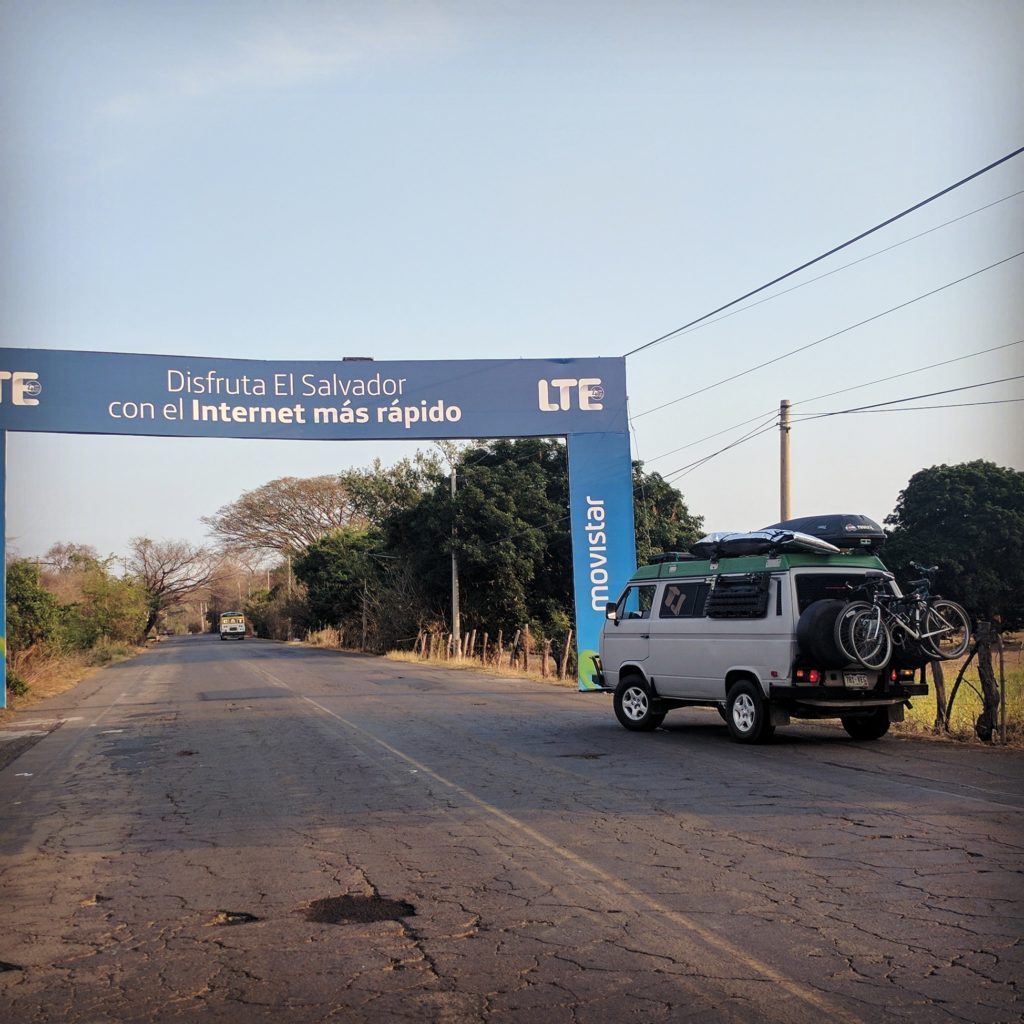 4 thoughts on “Back we go to Guatemala!”